Trending
You are at:Home»Herbs and Spices»Know about Coral Vine (Mexican Creeper) 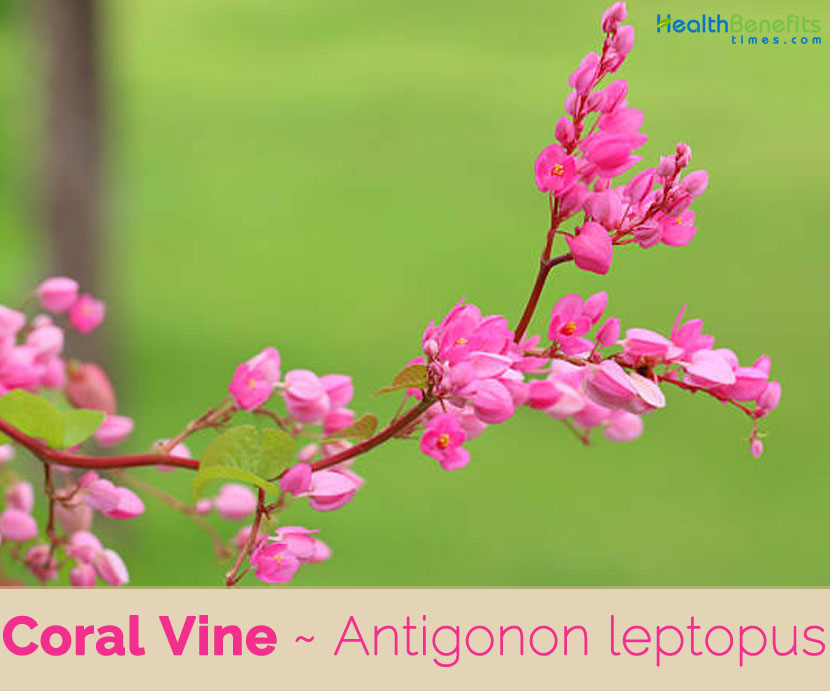 The name of the genus is of uncertain origin, after some it should come from the Greek “anti” = against and “gόnia” = angle, with reference to the angular stems; the name of the species is the combination of the Greek terms “leptos” = thin and “pus, podόs” = foot, with reference to the thin stems. Not a lot of plants are completely edible but this is a unique feature the coral vine has. Since it is food to a lot of people it has traversed the world. In some regions it is cultivated in landscapes as an ornamental since it has showy flowers. The fruit and seeds are eaten and spread by a wide range of animals such as pigs, raccoons and birds. The tubers will re-sprout if the plant is cut back or damaged by frost.

Stems are puberulent, pentagonal, with many lateral branches. The slender stems climb up or sprawl over other vegetation by means of tendrils that are borne in the leaf forks (axils). They are branched, angular in cross-section, and either hairless (glabrous) or sparsely to densely covered in brownish or reddish hairs (pubescent). Older stems may sometimes become brown and woody towards the base of the plant, while younger stems are reddish-brown or green in color.

The alternately arranged leaves are simple and borne on stalks (petioles) 1-5 cm long. These stalks are sometimes slightly winged and have a very small membranous structure (ochrea) 0.2-2 mm long at their base. The leaf blades are 2.5-15 cm long and 2-10 cm wide and are either egg-shaped in outline with broad end at base (ovate), heart-shaped (cordate) or somewhat triangular in shape. The lower ones are usually larger and broader, while the upper ones are smaller and narrower. These leaves may have either entire, wavy (undulate) or bluntly toothed (crenate) margins and the tips are usually pointed (acute to acuminate apices). They may be hairless (glabrous) or somewhat hairy (pubescent), especially along their veins on their undersides. The leaves are light to dark green in color, have a strongly wrinkled (rugose) appearance, and are lined with a network of veins (they are reticulately veined).

Flowers are borne in unbranched, or more commonly branched, clusters at the tips of the branches (in terminal racemes or panicles). These flower clusters are 4-20 cm long and have hairy stalks (puberulent to pilose peduncles) and the flowers are arranged into small groups along the branches (with 1 to 4 flowers in each group). Tips of the flower clusters usually end in a short tendril. Individual flowers are borne on smaller stalks (pedicels) 3-10 mm long and each flower has five ‘petals’ (sepals or perianth segments) that are usually bright pink in color, but may occasionally be white or reddish. These petals are 4-10 mm long and 2-6 mm wide and have entire margins and pointed tips (acute apices). They also have eight stamens and an ovary topped with three styles and stigmas. Flowering may occur throughout the year, but is most prominent during autumn (i.e. from April to May).

The small brown fruit (achenes) are cone-shaped or three-angled and are 8-12 mm long and 4-7 mm wide having shiny appearance. These fruit usually remain hidden within the enlarged and persistent remains of the petals that are 8-20 long and 4-15 mm wide, which turn dull pink and then eventually brown as they age. 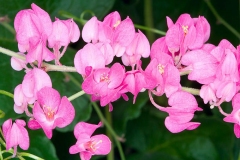 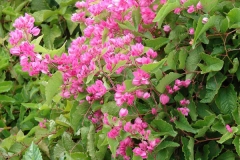 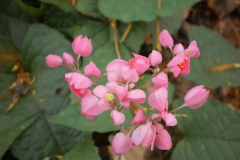 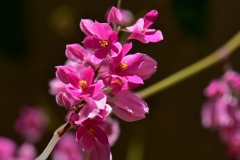 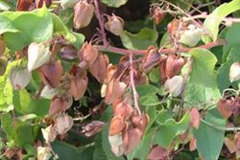 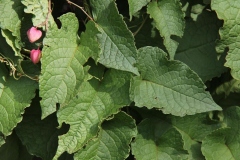 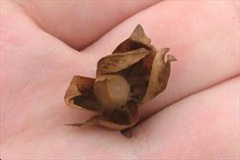 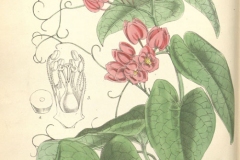 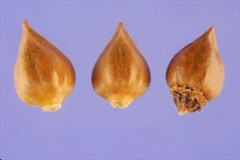 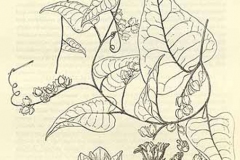 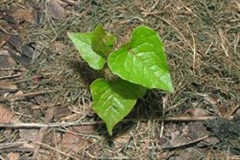 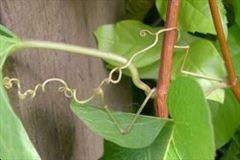