Trending
You are at:Home»Herbs and Spices»Interesting facts and benefits of Coralberry – Symphoricarpos orbiculatus 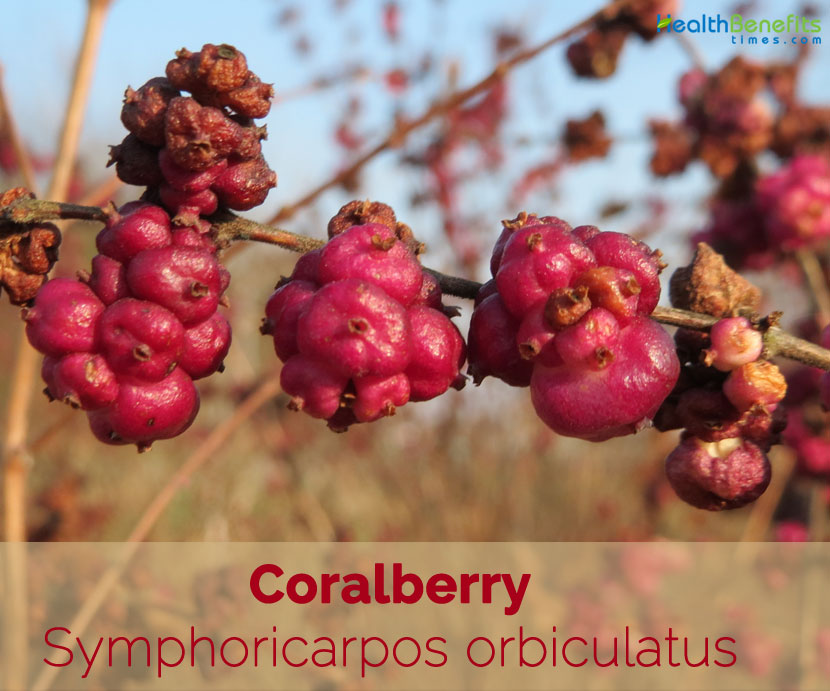 Symphoricarpos orbiculatus, commonly called coralberry, is a woody species of flowering plant in the honeysuckle family (Caprifoliaceae). The plant is native to eastern and central United States as well as central Canada (Ontario) and northeastern Mexico (Coahuila, Nuevo León). It typically occurs in open woods, fields, pastures and thickets throughout the State. Coralberry, Indian Current, Snowberry, Waxberry, snapberry, buckleberry, wolfberry, turkey bush, Indian currant Buck brush and Round snowberry are some of the well-known common names of the plant. Genus name Symphoricarpos comes from the Greek word symphorein meaning bear together and karpos meaning fruit in reference to the fruits appearing in clusters. The specific epithet orbiculatus means round and flat, disk-shaped which the fruit are.

The plant performs well in sandy, loamy and clay soils and can grow in heavy clay and nutritionally poor soils. Normally it prefers acid, neutral and alkaline soils. The root system consists of a woody branching taproot. Twigs of slender and at first scruffy brownish green, later darkening to a reddish brown with very fine peeling strips; scales present where new branches emerge and single bundle scars. The branches are erect to ascending and arching, slender with light brown to purplish bark on young stems and brownish-gray and shreddy on old stems. Young twigs have soft hair.

The leaves are oval or ovate shaped, and arranged oppositely along the branches. The blades of the opposite leaves are up to 2 inches long and 1¼ inches across. They are oval-ovate and the margins are without lobes or teeth but the margin may be wavy. Both tip and base are of obtuse shape. The upper surface of each leaf blade is medium green and hairless to slightly pubescent, while the lower surface is whitish green and usually has fine hair, particularly on the veins and the leaf edge. Each leaf has a short petiole up to ¼ inches long. Leaf venation is pinnate. 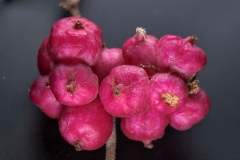 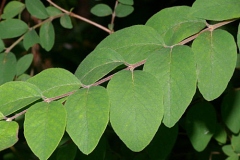 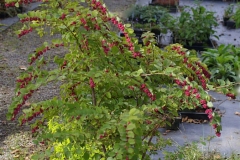 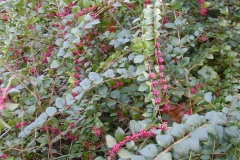 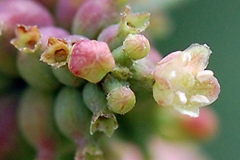 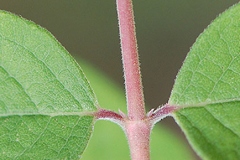 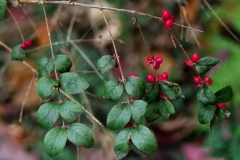 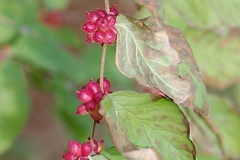 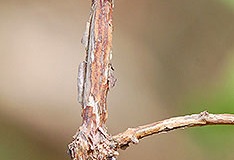 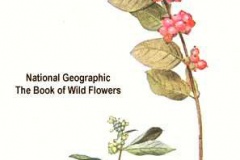 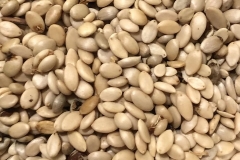 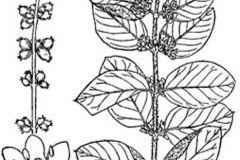 The inflorescence is tight cluster of very small flowers in the axils of some of the leaf pairs – generally toward the tips of the stems. The flowers have a bell shaped corolla with five lobes, which may be whitish, yellowish or tinged in purple; the lobes do not spread widely when the flower is open. The calyx is green with five pointed teeth which persist onto the drupes. The reproductive parts include 5 stamens which surround a bearded (hairy) style. Each flower is about 1/4 inch long.

Each fertile flower is replaced by an ovoid to globose berry-like drupe that is pink to coral red (from which comes the common name) to reddish-purple in color, and about 1/4 inch long. The drupes are usually so densely packed that the shape is often flattened. The top end of the drupe has a short beak. The texture of their flesh is fleshy but not juicy. Fruit sometimes persists through the winter. Each drupe contains a single stony seed. Seeds are hard, egg-shaped, flattened on one side, white and smooth. Rarely, you might find a plant that bears white fruits.

Traditional uses and benefits of Coralberry