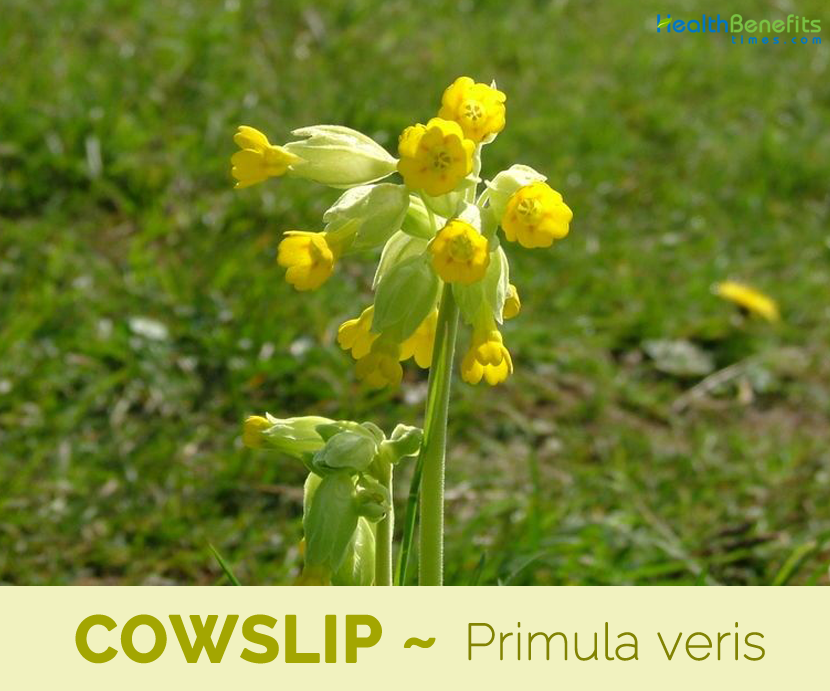 Primula veris, commonly called cowslip, is a clump-forming, herbaceous perennial plant of the primrose family that is noted for its early to mid-spring bloom of showy, nodding, lemon yellow flowers. Apart from cowslip it is also known as Arthritica, Buckles, Butter rose, Crewel, Cuy lippe, Drelip, Fairy cups, Herb peter, Key of heaven, Key flower, Mayflower, Our Lady’s keys, Paigle, Pasywort, Password, Peagle, Peggle, Petty mulleins, Plumrocks, Printemps, Promrose, Primula, Primular officinalis and Tittypines. It is native to temperate areas of Europe and Asia. It has been introduced and has naturalized in eastern North America from Quebec and Ontario south to Michigan, New York and Connecticut. It is a well-known hedgerow plant in Europe.

The common name cowslip may derive from the old English for cow dung, probably because the plant was often found growing amongst the manure in cow pastures. An alternative derivation simply refers to slippery or boggy ground; again, a typical habitat for this plant. Genus name comes from the contraction of the medieval name primula veris for the daisy, meaning “firstling of spring”. It can be a beautiful addition to any herb garden or ornamental garden due to its beautiful yellow flowers which also contain medicine and may be made into syrup for medicinal purposes.  It can be planted alongside other ornamental herbs such as daffodils, periwinkle, roses, poppy, cornflower, amaranth, white and red carnation as well as iris.

Cowslip is a variable evergreen or semi-evergreen perennial plant with a short sturdy rhizome that grows about 25 cm (10 in) tall and broad. The plant is found growing in well-drained, herb-rich grasslands, and may occasionally occur in scrub or woodland edges or rides, on seasonally flooded areas, and on calcareous cliffs. It prefers deep, moist, humusy, organically rich soils. Leaves are 5–15 cm long and 2–6 cm broad oblong or oval shaped and finely bristled leaves that form a rosette at the base of the plant. The upper side of the leaf is glabrous. Deep yellow flowers are produced in spring, in clusters of 10-30 blooms together on a single stem. Each flower is 9–15 mm broad. Flowerings normally take place from Apr to May. Fruit is an oval capsule with 1.5 to 2.5 mm-long brown, warty seeds. Seeds ripen in July-August.

Traditional uses and benefits of Cowslip

Infusion of cowslip flowers is made from a spoonful of dried flowers over which a cup of boiling water is poured. It is then left to infuse for 10 minutes after which it is consumed and is effective against colds.

Decoct from cowslip roots is prepared by putting a spoonful of roots in a cup of water. The mixture is then left to boil and then set aside. After cooling it is consumed, bearing in mind that the mixture is strengthening for the heart.

Cowslip syrup is suggested in cases of breathing disorders and is obtained from crushed flowers mixed with honey and water.

Cowslip tea is used against insomnias and is obtained from 50 g of cowslip herb, 25 g of lavender flowers, 10 g of St. John’s wort herb, and 15 g of hop plant. A spoonful of the above mentioned quantities is mixed in 0.25 liters of water and is let to sit for 3 minutes. The tea is consumed very warm in small gulps.

Boiled mixture of cowslip roots is a great cure for kidney problems. The tea is obtained from 50g cowslip, 50g common elder, 15 g nettle leaves, and 15 g dandelion roots. A spoonful of these quantities is mixed in 0.25 liters of water. After that, the mixture is left to boil and to sit for 3 minutes. Two cups should be consumed throughout the day.

Cowslip wine is prepared from 2 liters of fresh flowers in a bottle of water, on top of which white wine is poured. The flowers must be covered. The bottle (covered with a cork) is then let to sit for 14 days in the sunlight. In treating heart diseases it is recommended that the wine be consumed each day 3 to 4 spoonfuls.nn