Trending
You are at:Home»Fruits»Traditional uses and benefits of Desert Date 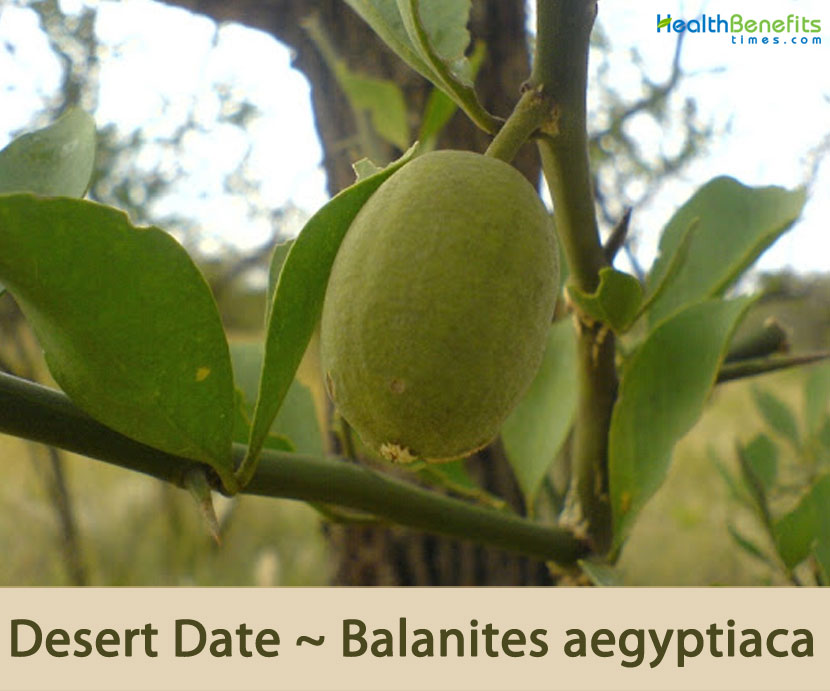 Balanites aegyptiaca also known as the Egyptian balsam or Desert Date is a species of tree, classified as a member of either the Zygophyllaceae or the Balanitaceae. The tree is native to much of African woodlands along the Sahara southern border and parts of the Middle East. It occurs in a wide ecological range, including the Saharan, Sahelian and Sudanian zones, and can also be found further south, down as far as Katanga and Tanzania. It is commonly seen in Israel, Jordan, the Arabian Peninsula, and the drier parts of Pakistan and India. It is cultivated in Cape Verde, the Dominican Republic and Puerto Rico. In India, it is particularly found in Rajasthan, Gujarat, Madhya Pradesh, and Deccan. Popular common names of the plants are desert Date, Egyptian myrobalan, heglig, Jericho balsam, simple thorned torch tree, simple-thorned torchwood, soap berry tree, Balanite, thorn tree, Egyptian balsam tree and zachum oil tree.

There are many common names for this plant. In Arabic it is known as lalob, hidjihi, inteishit, and heglig. In Jieng it is called Thou or thau, in Hausa it is called Aduwa, in Tamasheq, the Tuareg language taboraq, in Fulani or Pulaar “Murtooki”, in Swahili mchunju, in Kamba Kilului and in Amharic bedena. The generic part of the binomial Balanites is derived from the Greek word for an acorn and refers to the fruit, this name was coined by Alire Delile in 1813. The specific name aegyptiaca was applied by Carl Linnaeus as the species was initially described from specimens collected in Egypt.

Desert Date is a deep-rooted, multi branched, spiny, evergreen or semi-deciduous shrub or small tree with a spherical crown that normally grows about 8 meters tall and rarely up to 10 meters (33 ft.) and a trunk diameter of 30 centimeters. The trunk is short and often branched near the base or the specimen is multi-stemmed. The bark is dark brown to gray and deeply furrowed lengthways. The spread or overhanging branches usually have thorns. The thorns, which are 1 to 4 millimeters above the leaf axils, are strong, yellow or green, usually 2 to 8 (0.4 to 11.5) centimeters long; they are seldom simple and bare, usually they have a few early sloping, scale-shaped, about 0.75 millimeter long leaf rudiments. The bark of the twigs is initially grayish-green and has tiny, fine to tomentose hairs, later turns light brown and bare.

The plant is found growing in arid and semiarid thickets, sub humid tropical savannas, deciduous bush lands, valley floors, riverbanks or the foot of rocky slopes. It also occurs in hot dry areas, along watercourses and in woodlands. It can be found in many kinds of habitat, tolerating a wide variety of soil types, from sand to heavy clay, and climatic moisture levels, from arid to sub humid. It is comparatively tolerant of flooding, livestock activity, and wildfire.

Depending on the location, there are often only a few leaves, alternating and spiraling on the branches. The rutty petiole is 2 to rarely 3.5 centimeters long or hardly recognizable with a short rhachis. The pinnate leaf blade consists of only two leaflets. The petioles of the pinnate leaves are usually 1 to 5 (0 to 8) millimeters long. The leathery, light green or dark green leaflets have very different sizes and shapes; they can be asymmetrical and depending on the location with a length of 1 to 6.8 centimeters and a width of 0.3 to 5 centimeters narrow-elliptical, broad-ovoid or obovate with a pointed to blunt base and rounded upper end and smooth edge be. The leaf surfaces are initially hairy to tomentose and then bald.

Usually 2 to 15 (1 to 20 or more) flowers are more or less close together in clusters on thorny nodes or thorn less short shoots above the leaf axils. The densely downy hairy flower stalks are usually 4 to 11, rarely up to 20 millimeters long. The flower buds are egg-shaped and tomentose.

The relatively small, yellowish-green, fragrant, inconspicuous, hermaphrodite flowers have a diameter of 8 to 14 millimeters and are radially symmetrical and five-fold. The five yellowish or blue-green petals are narrow and obovate-elliptical with a length of 4.5 to 6.5 millimeters. There are ten stamens. The ovary is hairy finely to tomentose. The stylus is 1 to 2 millimeters long.

After fertilization, the ovary elongates very clearly into the young fruit. The ellipsoid stone fruit is usually 2.5 to 4 (2.3 to 4.5, rarely up to 7) centimeters in length and usually 1.7 to 2.2 (1.3 to 2.5, rarely) in diameter up to 4) centimeters relatively long and narrow, ovate to ellipsoidal and rounded or truncated at both ends. Young fruits are green and tomentose and usually turn yellow to more or less brown and bare when ripe. When ripe, the fruit skin is brittle. The edible, brown or brown-green pulp is bitter-sweet. The stone core that contains the seed is 1.5 to 3 centimeters long, light brown, fibrous and extremely hard; it makes up to 50 or 60% of the fruit. 500 to 1500 dry, clean seeds weigh about 1 kg.

Flowers are small, inconspicuous, hermaphroditic, and pollinated by insects. Seeds are dispersed by ingestion by birds and animals. The tree begins to flower and fruit at 5 to 7 years of age and maximum seed production is when the trees are 15 to 25 years old. 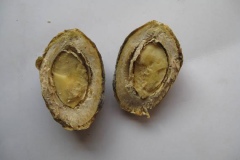 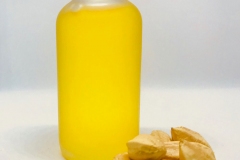 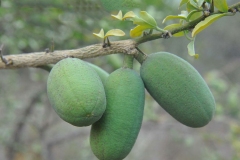 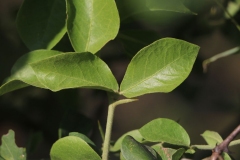 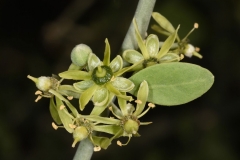 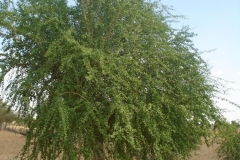 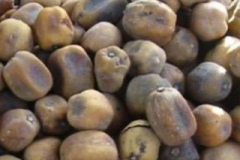 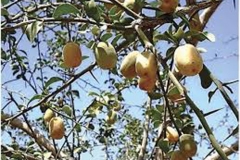 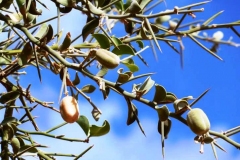 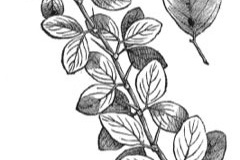 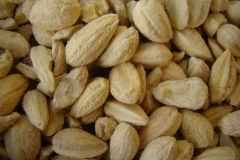 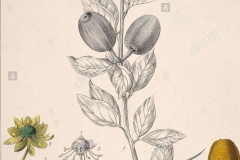 Food: The fleshy pulp of both unripe and ripe fruit is edible and eaten dried or fresh. The fruit is processed into a drink and sweetmeats in Ghana, alcoholic liquor in Nigeria, a soup ingredient in Sudan. Young leaves and tender shoots are used as a vegetable, which is boiled, pounded, then fried or fat added to prepare it. The flowers are a supplementary food in West Africa and an ingredient of ‘dawa dawa’ flavoring in Nigeria. Flowers are sucked to obtain nectar.

Fodder: The fresh and dried leaves, fruit and sprouts are all eaten by livestock. As shown in an experiment in Burkina Faso, B. aegyptiaca contributed up to 38% of the dry-matter intake of goats in the dry season. Kernel meal, the residue remaining after oil extraction, is widely used in Senegal, Sudan and Uganda as a stock feed. The tree is lopped for fodder in India.

Fuel: The wood is good firewood; it produces considerable heat and very little smoke, making it mostly suitable for indoor use. It produces high-quality charcoal, and it has been suggested that the nutshell is suitable for industrial activated charcoal. The calorific value is estimated at 4600 kcal/kg.

Fiber: A strong fiber is obtained from the bark.

Timber: The wood is pale yellow or yellowish-brown. Heartwood and sapwood are not clearly differentiated. The wood is hard, durable, worked easily and made into yokes, wooden spoons, pestles, mortars, handles, stools and combs. It shows no serious seasoning defects and no tendency towards surface checking or splitting. The wood saws cleanly and easily, planes without difficulty to a smooth finish and is easy to chisel. It glues firmly and takes a clear varnish. Timber has traditionally been a minor product. The usually small log size and the prevalence of stem fluting make sawmill processing difficult.

Gum or resin: Greenish-yellow to orange-red resin is produced from the stems. It is sucked and chewed when fresh. It is used as glue for sticking feathers onto arrow shafts and spearheads and in the repair of handle cracks and arrows.

Lipids: Kernels produce edible oil used for cooking. The oil remains stable when heated and has a high smoking point, and thus its free fatty acid content is low. Its scent and taste are acceptable.

Alcohol: The fruit may be used to brew an alcoholic drink.

Poison: An emulsion made from the fruit or bark is lethal to the freshwater snails that are the host of miracidia and cercaria stages of bilharzia and to a water flea that acts as a host to the guinea worm. Fish poison can be obtained from the fruit, root and the bark. The active agent of the poison is saponin. Compound is toxic to fish but does not affect mammals and rapidly becomes inert, so that fish retrieved are edible. However, in the Fada region of Cote d’Ivoire, the poison is reported to damage the sight of fishermen after they have used it for 5-6 years.

Other products: The seeds are used for rosary beads, necklaces and in the game of warri played in Sudan.

D Fruits
Share. Twitter Facebook Google+ Pinterest LinkedIn Tumblr Email
Previous ArticleSafety First: Important Tips to Caring For Your Body After A Car Accident
Next Article How To Find The Best Dentist For Your Needs