Trending
You are at:Home»Herbs and Spices»Facts and benefits of European Ash 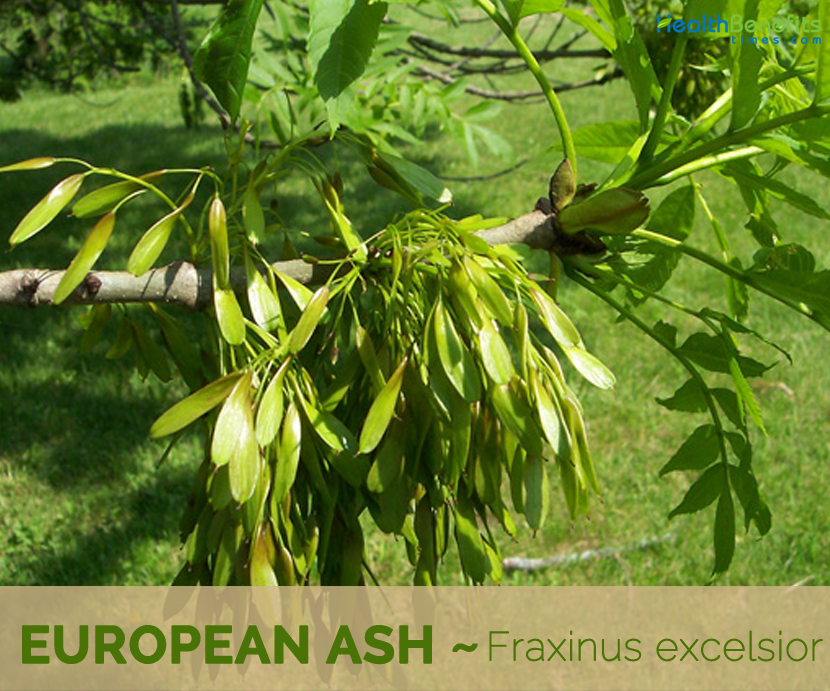 Fraxinus excelsior commonly known as Ash, European ash, common ash, weeping ash, bird’s tongue, American Ash, Biltmore Ash, Cane Ash and White Ash is a flowering plant species in the olive family Oleaceae. The plant is native throughout mainland Europe from Portugal to Russia, with the exception of northern Scandinavia and southern Iberia. It is also considered native in southwestern Asia from northern Turkey east to the Caucasus and Alborz mountains. The species is widely cultivated and reportedly naturalized in New Zealand and in scattered locales in the United States and Canada.

European Ash is a large deciduous tree that grows about 20–35 m (66–115 ft.) (exceptionally to 46 m or 151 ft.) tall with a trunk up to 2 m (6.6 ft.) (exceptionally to 3.5 m or 11 ft.) Diameter, with a tall, domed crown. The bark is smooth and pale grey on young trees, becoming thick and vertically fissured on old trees. The plant is easily identified in winter by smooth shoots that are stout, greenish-grey, with jet black buds (which distinguish it from most other ash species, which have grey or brown buds). The branches of this tree do not have any hair or bristle and has a grayish-green hue.

Leaves are 20–35 cm (7.9–13.8 in) long, pinnately compound, typically comprising 3-6 opposite pairs of light green, oval leaflets with long tips, up to 40cm long. The leaflets are 3–12 cm (1.2–4.7 in) long and 0.8–3 cm (0.31–1.18 in) broad. There is an additional singular ‘terminal’ leaflet at the end. The leaves can move in the direction of sunlight, and sometimes the whole crown of the tree may lean in the direction of the sun. Another characteristic of ash leaves is that they fall when they are still green. The leaves are often among the last to open in spring, and the first to fall in autumn if an early frost strikes; they have no marked autumn color, often falling dull green. Leaves are dark green in summer, changing to yellow green or a mild yellow in fall.

Female flowers being somewhat longer than the male flowers; they are dark purple, and without petals, and are wind-pollinated. Flowers appear before the leaves in spring, growing in spiked clusters at the tips of twigs. Both male and female flowers can occur on the same tree, but it is more common to find all male and all female trees; a tree that is all male one year can produce female flowers the next, and similarly a female tree can become male.

Once the female flowers have been pollinated by wind, they develop into conspicuous winged fruits, or ‘keys’, in late summer and autumn. The inconspicuous springtime flowers are followed by clusters of winged fruits samara 2.5–4.5 cm (0.98–1.77 in) long and 5–8 mm (0.20–0.31 in) broad which turn brown and remain on the trees well after the leaves have fallen. They are dispersed by birds and mammals.

As an infusion: One or two teaspoons of ground leaves to a cup of hot water. Steeped for 2 to 3 minutes and then strained. Drink one to two cups a day.

As a decoction: One teaspoon of bark powder to a cup of water. Boiled briefly and then steeped for 2 to 3 minutes. Drink one cup daily. For a more appealing taste add peppermint or sweet marjoram.

The leaves should be picked in early summer when they are glazed by a thin mucous membrane. Then, dried and stored in an airtight container.

Best is to collect the bark in the spring, then dry it and grind into a powder. The seeds should be harvested while they are young and green.