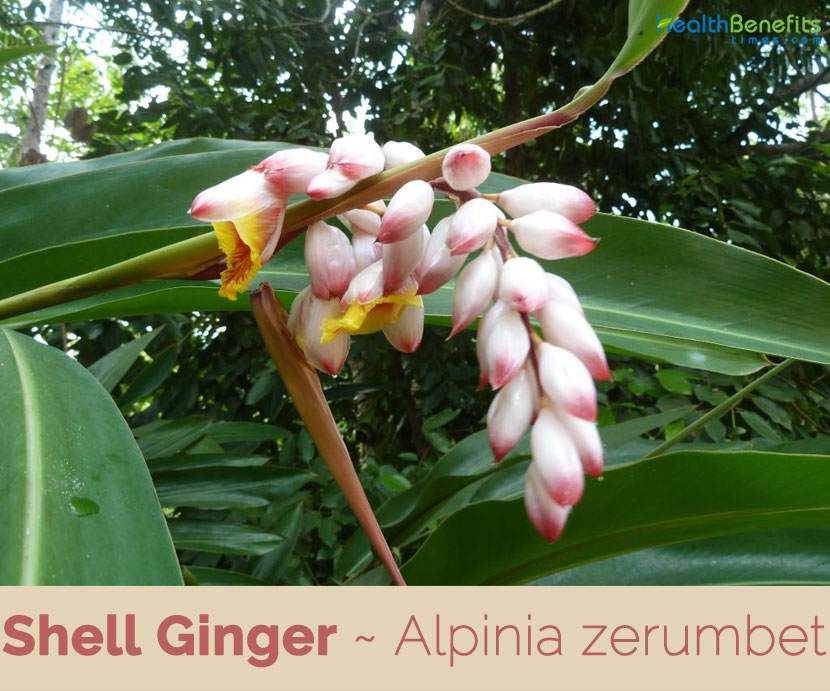 Shell Ginger also known as bright ginger has scientific name Alpinia zerumbet is a perennial species of ginger from the family of Zingiberaceae. The plant is native to eastern Asia—South Japan to Taiwan and South China to Northern Peninsula and Malaysia. Bright Ginger, Butterfly Ginger, Light Galangal, Pink Porcelain Lily, Pink Shell Heliconia, Shell Flower, Shell Ginger, Shell Plant, Variegated Ginger and Variegated Shell Ginger are few of the popular common names of the plant. The genus is honored to the Italian physician and botanist Prospero Alpini (1553-1617). The specific name is the local one utilized in India. They are grown as ornamentals and their leaves are used in cuisine and traditional medicine.

Shell Ginger is a robust, rhizomatous, clump forming evergreen, herbaceous perennial plant that grows about 1–3 m tall. The plant more typically reaches 4-8 feet tall in the greenhouse and 3-4 feet tall as a houseplant. The plant is found growing in typically wet environments such as stream banks and shady slopes, and occurs in natural forests, riparian zones, wetlands, watercourses, forest margins, roadsides, urban open space in moist, warm, coastal and inland regions. The plant grows in slightly alkaline to acidic soils on clays, sands or loams. It is moderately drought tolerant but has poor salt tolerance. It is commonly called shell ginger because its individual shell pink flowers, particularly when in bud, look like sea shells and its rhizomes have a ginger-like aroma. It is distinguished from other members of the ginger family by the fact that its flowers sag from the ends of leafy stems rather than rise directly from plant rhizomes.

Alternate leaves are simple, broad, and lanceolate to oblong-lanceolate with pointed apex and margins provided of short down. Bright green, shining leaves are up to 30-65 cm long and 5-12 cm broad sheathing the stems and prominent white midrib.

Flowers are borne in pendant showy and fragrant racemes up to 400 mm long, and its main axis is very hairy; white, waxy and pink tinged ovate bracteoles enfold the buds. Flowers are orchid-like and funnel-formed. Calyx and corolla are tubular, corolla is white, and its labellum is up to 40 mm, crinkled and yellow, with red and brown stripes. Stamens are 3 but only 1 is functional, and it has 2 staminodes. Its ovary is inferior and 3-loculed. Flowering normally takes place from April-June.

Fertile flowers are followed by globose capsules 2.5-3 cm long, and 2 cm in diameter, with orange red longitudinal ribs, containing about 30 bluish tetragonal seeds provided of white aril. It reproduces by seed, but usually and easily by division to be done during the winter months. 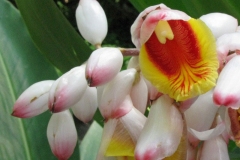 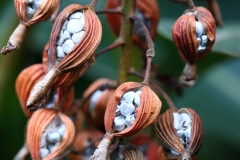 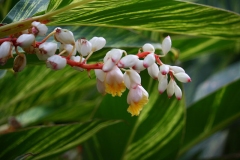 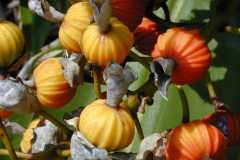 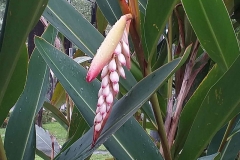 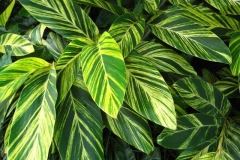 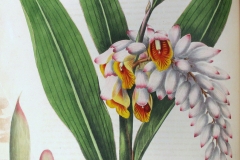 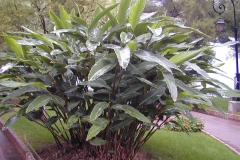 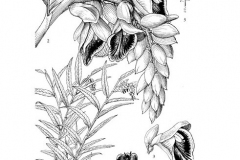 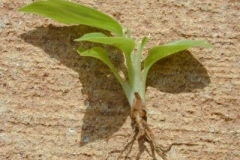 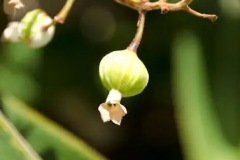 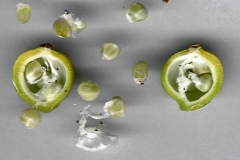