Trending
You are at:Home»Herbs and Spices»Facts and benefits of Ragwort 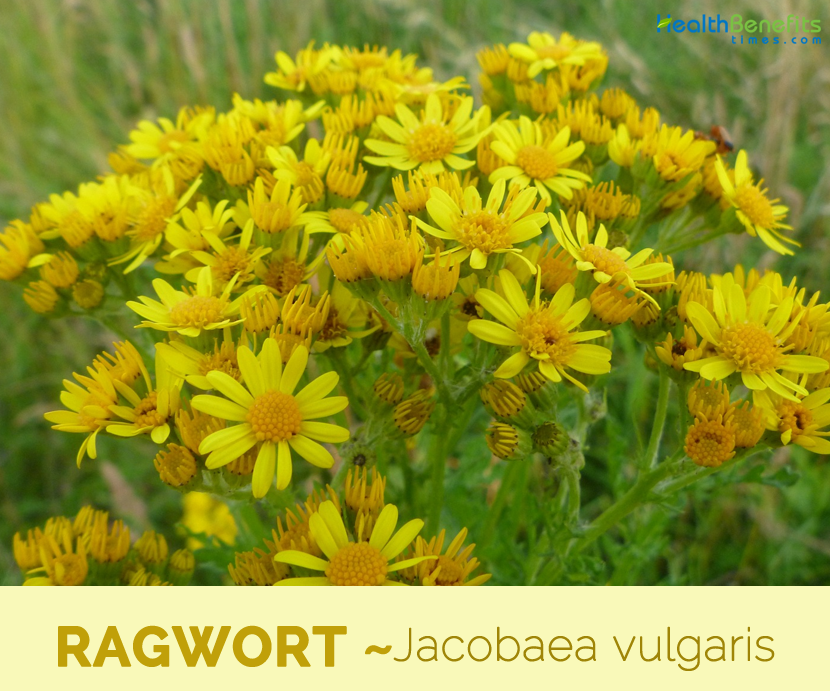 Jacobaea vulgaris commonly known as ragwort, common ragwort, tansy ragwort, benweed, St. James-wort, ragweed, stinking nanny/ninny/willy, staggerwort, dog standard, cankerwort, mare’s fart, cushag, stinking willie and stinking nanny is a very common wild flower in the daisy family (Asteraceae).  In the western US it is generally known as “Tansy Ragwort”, or even more confusingly “Tansy”, though its similarity to the true tansy is superficial at best. This is a potentially dangerous misuse of names, since the true tansy has been used for culinary purposes. The plant is native to Europe, North Africa, Caucasus and Western Asia, usually in dry, open places, and has also been widely distributed as a weed elsewhere. The plant has been introduced to North and South America, Australia and New Zealand.

One of the old English names for ragwort is “stammerwort”, referring to the common belief that it could be used to treat stuttering. Although the plant is often undesirable by landowners because it is considered a weed by many, it offers a great deal of nectar for pollinators. It was rated in the top 10 for most nectar production (nectar per unit cover per year) in a UK plants survey conducted by the AgriLand project which is supported by the UK Insect Pollinators Initiative. It also was the top producer of nectar sugar in another study in Britain, with a production per floral unit of (2921 ± 448μg). The medicinal use of these plants without medical supervision is not advisable.

Ragwort is an herbaceous biennial, winter annual or short-lived perennial (usually monocarpic) plant that grows about (20- ) 80-150 cm tall.  The plant is generally considered to be biennial but it has the tendency to display perennial properties under certain cultural conditions (such as when subjected to repeated grazing or mowing). The plant is found growing abundant in waste land, waysides and grazing pastures. It can be found along road sides, and grows in all cool and high rainfall areas, railway embankments, ballast soil deposits, harbors, yards and meadows. The plant prefers lighter, well-drained soils. The plant has poorly developed to evident tap root. Stems are branched, deep-grooved, sparsely hairy, reddish brown, erect, stiff, straight, have no or few hairs.

Leaves are alternate, often petiolate, becoming reduced in size upward, broadly ovate to ovate, deeply, bi- or tri-pinnatifid, 7-20 cm long and 2-6 cm wide. Basal leaves form a rosette, first leaves ovate, blunt, successive leaves lyrate-pinnatifid with 0-6 pairs of lateral lobes, early deciduous. Upper leaves more or less amplexicaul, auricles laciniate. Leaves differ in the degree of dissection, width of the lobes and in the presence of cottony hairs on the abaxial surfaces. The many names that include the word “stinking” (and Mare’s Fart) arise because of the unpleasant smell of the leaves.

Hermaphrodite flower heads are 1.5–2.5 centimeters (0.59–0.98 in) diameter, and are borne in dense, flat-topped clusters; the florets are bright yellow. It has a long flowering period lasting from June to November. Pollination is done by bees, flies, moths, and butterflies. Fruit is a round, ridged, glabrous–shortly haired, approx. 2 mm (0.8 in.) long achene with unbranched hairs on tip. The medicinal use of these plants without medical supervision is not advisable.

There are four main types of ragwort to be found in Ireland according to An Irish Flora (1996) namely:

All four can interbreed where both parents are found.

Traditional uses and benefits of Ragwort

The only way to safeguard against loss from ragwort poisoning is to eradicate the weed either by pulling, ploughing, cutting or chemical control.

Pulling by hand is suggested where infestation is not severe and labor is available. Pulling after heavy rainfall when the ground is soft gives best results, but this should be done before seed has set. Pulled plants should be removed and destroyed. As the seedling and rosette stages are not usually removed by hand pulling, the operation should be repeated for two consecutive years to achieve satisfactory eradication. In most cases this is unpractical.

Most reliable method of control is to plough infested grassland and follow with a 3 or 4 year rotation of arable cropping before establishing a good ley again. Unfortunately this can only be done in areas which can be tilled and where arable farming is practiced. Ploughing followed by direct seeding will not be a success unless chemical control (2.4DB or MCPA) of newly germinated ragwort is carried out in the new ley. Extra care should be taken to prevent the development of seeding ragwort in new ley.

Cutting the plant before the flowers are open prevents the weed from seeding and spreading, but it is only of limited value unless carried out over a number of years and accompanied by good grassland management. In some cases cutting can induce development of several heads and the affected plants may persist as perennials. Cut plants should be collected and destroyed as an additional precaution against the risk of seed formation and livestock poisoning.