Trending
You are at:Home»Herbs and Spices»Facts and Benefits of False Hellebore (American Hellebore) 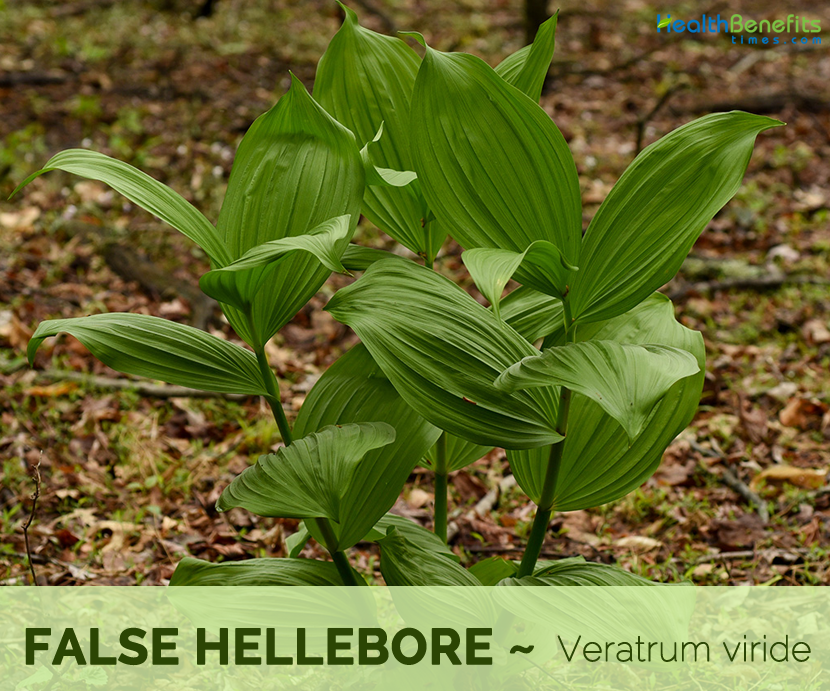 False Hellebore (American Hellebore) scientifically known as Veratrum viride is a species of Veratrum native to eastern and western North America. It is extremely toxic so it is considered a pest plant by farmers with livestock. The species has acquired a large number of other common names within its native range, including Indian Poke, Indian Hellebore, Green False Hellebore, giant false-helleborine, American False Hellebore, American White Hellebore, Bear Corn, Big Hellebore, Corn Lily, Devils Bite, Duck Retten, Itch-weed, Itchweed, Poor Annie, swamp hellebore, Blue Hellebore, Tickleweed, bugbane and green hellebore. The native North American plant was named according to its toxic properties that were like those of the true hellebores of Eurasia. The plant belongs to Liliaceae (Lily family). Almost all parts of the plant are highly poisonous and use of this plant should be carried out with great caution and preferably only under the supervision of a qualified practitioner. The plant reproduces through rhizome growth as well as seeds.

False Hellebore is an herbaceous perennial plant that grows about 0.7–2 m tall. The plant is found growing in moist to wet meadows, thickets, swamps, stream-banks, and open forests from the lowland and all the way to the alpine zones. It prefers deep fertile moisture retentive humus-rich soil and normally dislikes dry soils, preferring to grow in a bog garden. The plant has solid green stem. Leaves are spirally arranged, 10–35 cm long and 5–20 cm broad, elliptic to broad lanceolate ending in a short point, heavily ribbed and hairy on the underside. The leaves are usually oval to linear.

Flowers are numerous, produced in a large branched inflorescence 30–70 cm tall; each flower is star shaped 5–12 mm long, with six green to yellow-green tepals. The flowers are short pedicled and often unisexual. Flowering usually occurs from Jul to August. Fruit is a capsule 1.5–3 cm long, which splits into three sections at maturity to release the numerous flat 8–10 mm (0.3 to 0.4 in) diameter seeds.

There are two major varieties of false hellebore:

Veratrum viride var. viride grows in eastern North America from southern Quebec as far south as northern Georgia. It is differentiated by the erect or spreading side branches of the inflorescence.

Veratrum viride var. eschscholzianum grows in western North America from Alaska and Northwest Territory south along the Coast Range to the Pacific Northwest and northern California. They are wildly growing herbaceous perennials. It is differentiated by the drooping side branches of the inflorescence.

Mode of Administration: The herb can be found in whole and powdered forms.

Storage: The drug should be clearly labeled as “poisonous” and stored in a safe place.