Trending
You are at:Home»Herbs and Spices»Health benefits of False Unicorn 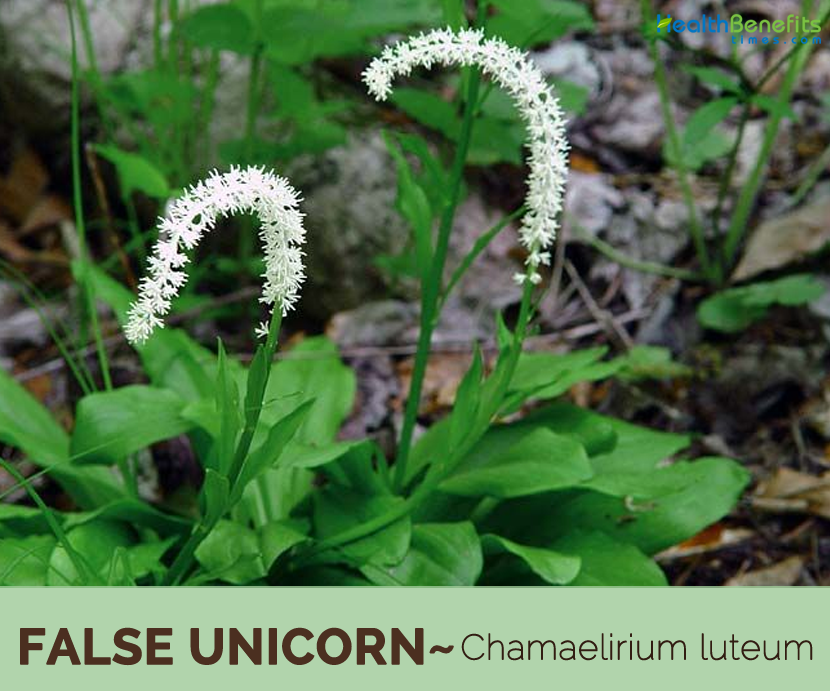 Chamaelirium luteum commonly known as False Unicorn, Blazing-Star, Devil’s Bit, False Unicorn, Fairy Wand, Helonias, Devil’s Claw, helionas dioica, helonias lutea, veratrum luteum, chamaelirium carolinianum, helionas root, blazing star root, starwort, squirrel tails, grub root, drooping starwort , rattlesnake , fairy-wand  is an herbaceous dioecious perennial plant  native to the eastern United States. It is the only member of monotypic genus, and is quite rare at the fringes of its range. It can be found in a variety of habitats, including wet meadows and deciduous woodlands. Genus name comes from the Greek words chamai meaning dwarf and lirion meaning a lily. It is used as ornamental or medical plant. The root contains high valuable substances, which have already been used as medicine by Native Americans a long time ago.

False Unicorn is an herbaceous dioecious perennial herb that grows about 30-100cm tall. Female stalks tend to be taller, giving a total maximum plant height of about 1.2 m, but also tend to have about ten times fewer flowers. It grows in a variety of habitats, including moist slopes, bottomlands, wet savannas, dry woods, barrens, and bluffs, typically absent from the eastern coastal plains. It also thrives in open woods and relatively open calcareous wet meadows. It prefers moist, well drained and acidic soil with high humus content. Stem is 1 to 3 feet high, simple, smooth, angular. Leaves are alternate, spatulate below, lanceolate above, radical leaves, 8 inches long, 1/2 inch wide, narrow at base and formed into a whorl.

Chamaelirium luteum is used both medicinally and as an ornamental plant. Called “helonias” in the medicinal and herbal literature, C. luteum was used by American Indians and by 1917 was considered one of the more widely used domestic drugs in North America. Medicinal uses include treatment of colic, stomach ailments, indigestion, the expulsion of worms, stimulation of appetite, and a variety of ailments associated with both male and female reproductive organs. False Unicorn Root contains estrogenic compounds.