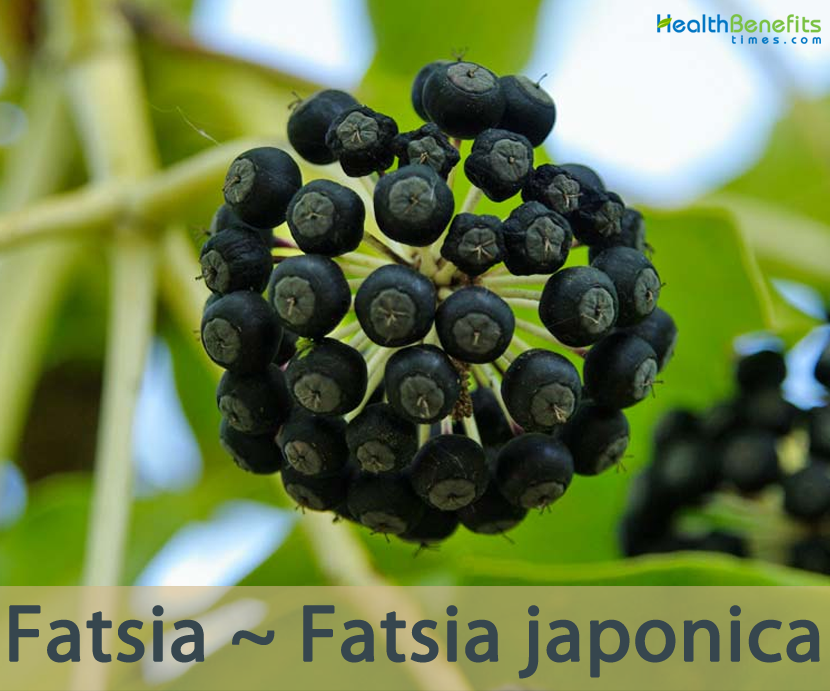 Fatsia japonica, commonly called Fatsia, paper plant, Japanese Fatsia or Japanese aralia, is a shade-loving shrub belonging to Araliaceae (Ginseng family). The genus was formerly classified within a broader interpretation of the related genus Aralia. The plant is native to southern Japan, southern Korea and Taiwan. Some of the popular common names of the plant are Fatsia, Japanese Fatsia, Japanese Aralia, Fatsi, Fig-Leaf Palm, Glossy-Leaved Paper Plant, Paperplant, Castor oil plant, Aralia, Glossy-leafed paper plant, false castor oil plant and Formosa rice tree. The name Fatsia comes from an approximation of the Japanese word for ‘eight’ (hachi in modern Romanization), which makes reference to its iconic 8 lobed leaves. In Japan it is known as yatsude meaning eight fingers. The name “Japanese aralia” is due to the genus being classified in the related genus Aralia in the past. It has been interbred with Hedera helix (common ivy) to produce the inter-generic hybrid × Fatshedera lizei.

Fatsia is a highly popular shrub in the Southeast due to its adaptability and tropical appearance along with good cold tolerance. It will grow throughout South Carolina with the exception of areas in the mountains that occasionally drop to below 10 °F. Fatsia japonica has particularly low maintenance requirements. It’s easy to care for planted in either full sun or part shade, and prefers a somewhat sheltered location. Since it is a useful and lovely shrub, Fatsia japonica has earned a coveted ‘RHS Award of Garden Merit’ and is on the RHS ‘Plants for Pollinators’ list, highlighting plants that produce large amounts of nectar and/or pollen. It is a great choice for encouraging beneficial insect wildlife into your garden!

Fatsia is a medium sized semi-dense broadleaf evergreen shrub or small tree that normally grows about 6 to 10 feet tall and 6 to 10 feet wide. Old plants in ideal growing conditions may reach 15 feet tall. Fatsia grows at a moderate to fast rate (8 to 12 inches per year) depending on growing conditions. Growth will be slower in full sun and dry soil, and faster in shade with rich, moist soil. The plant is found growing in forests, mountains, waste areas, abandoned gardens and coastal woodlands. The plant grows best in moist, well-drained, acidic soil rich in organic matter. Shade or dappled shade is necessary for best foliage appearance. Fatsia will grow well even in deep shade. Despite its preferences fatsia will tolerate sandy or heavy clay soils, moderate drought and air pollution and is moderately tolerant of salt spray.

Stems are very smooth, thick, not much branched, unarmed, and marked with large scars left by fallen leaves.

Leaves are large, leathery, sub-orbicular varying in size according to the size and vigor of the plant, normally 12-30 cm in diameter, palmately 7-9 deeply lobed, with a broad heart-shaped base.  The lobes reach more than half-way to the base, ovate, coarsely and bluntly toothed except towards the base, where the opening between the lobes is wide and rounded. Upper surface is dark shining green while the lower one is lighter, granular pro-tuberance, both quite glabrous, margin occasionally golden yellow.  Lateral pulse bulges on both sides, reticulate veins slightly prominent below. Petiole is round, stout, smooth, often 1 ft. or more long.

Terminal panicle is 20-40 cm long. Inflorescences are 3-5cm in diameter, rachis brownish tomentose; Calyx is sub entire, glabrous. Japanese aralia has 5 petals that are ovate-triangular, 2.5 – 3 mm long, yellow-white and glabrous. It has 5 stamens, filaments equal to petals length. Ovary is inferior, 5-locule, with 1 blastomere in each locule. It has 5 styles, detached; Disk is convex semicircle. They appear in October to November and last for several weeks.

Fertile flowers are followed by sub globose pea-shaped berries that are nearly 5 mm in diameter. These berries are initially green maturing to shiny black berries during early to mid-winter in the Upstate and mid to late winter along the coast. Berries last well on the plants, unless eaten by birds. Hard freezes will eventually cause the berry clusters to collapse. 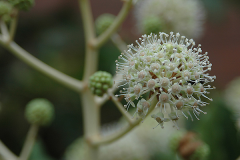 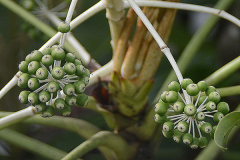 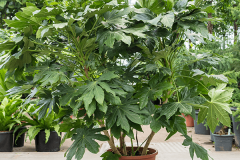 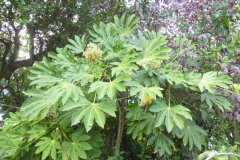 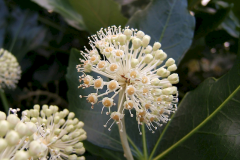 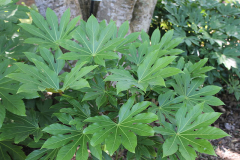 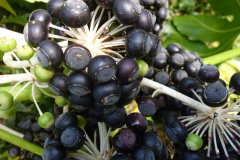 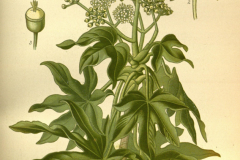 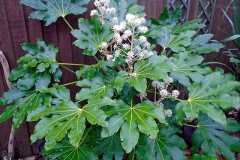 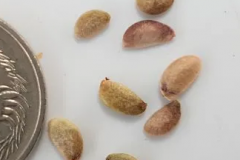 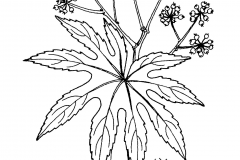 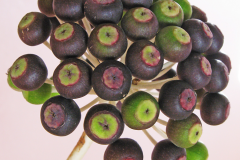 Fatsia Varieties in the UK

There are a number of different Fatsia forms available to buy in the UK. The most, the standard Fatsia japonica is widely grown and often used in council landscaping due to its tough, reliable nature and visual architectural impact. Listed below are some of the popular varieties grown or available in UK 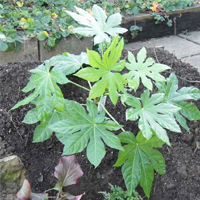 It is a more compact form of Fatsia found with ‘Moseri’. It doesn’t grow as tall and is supposedly said to have larger foliage. It is a good alternative for those with less space. 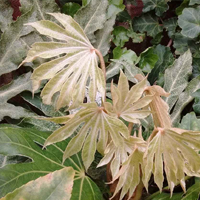 Fatsia ‘Spiders Web’ is an unusual variegated form where the large lobed leaves are covered in white spidery variegation giving it a mottled appearance. If you have limited space or want something stunning for a pot then Spiders Web is a good option. 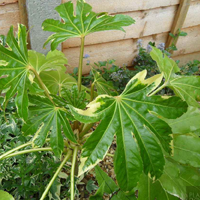 There is a cream variegated version of the standard green Fatsia. Variegata perform very similarly to the green leaved Fatsia except for the variegation which appears randomly but mostly around the edges of the leaf.

Sometimes the cream patterning does not appear, sometimes there is a small amount of cream coloring on the green foliage but it looks most spectacular when large patches of creamy white variegation appear on the leaves. 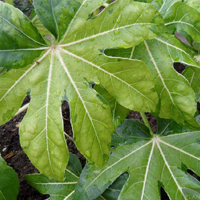 The most spectacular looking variegation appears on the form ‘Annelise’ which has cream veined leaves with dark, mid and light green variegated patterning. Again like ‘Spiders Web’ it looks great in a pot and this will also restrict the growth if space is a limiting factor. 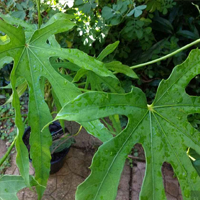 Not strictly japonica (Japan) but polycarpa (Taiwan) a close relation and very similar in looks. This has more slender lobed foliage and overall more airy and delicate looking giving it a more exotic and tropical appearance.

It is not as hardy as taking lows down to around -5°c to -10°c, possibly hardier than the standard Fatsia polycarpa although not long term proven in the UK.

Traditional uses and benefits of Aralia

Garden use of Japanese Aralia

Fatsia is evergreen with large leaves, a beautiful leaf shape, dark green light, is a popular indoor foliage plant. Adapt to indoor weak light environment, for hotels, restaurants, office buildings and family beautification commonly used plant materials. It is used to decorate the hall, window sill, corridor, poolside, or as the substrate of the indoor Flower bed. The leaf is also a good match for flower arrangement. In the south of the Yangtze River basin, it can be used in the open field and should be planted in the garden, corner and shady part of the building. Japanese Aralia also can adorn in the stream, pool or group under the forest, the grass side. It is an excellent foliage plant. It also can be potted for indoor ornamental.

Fatsia can absorb harmful gases such as carbon dioxide in the air and purify the air. In the house that modern lives, a lot of people often door window is closed, let the air in the home and the air outside be ventilated rarely, the harmful gas that the human body inside the home exhales is discharged to wait a moment outside the house. And when these harmful gases are accumulated to a certain amount in the room, the indoor air will become more and more turbid. Additionally, the air quality in cities is getting worse and worse. Fatsia is planted at home; it can absorb some harmful gases such as carbon dioxide, purify the air and make the owner’s life more comfortable.

Fatsia is an ornamental plant that is evergreen all year round and produces elegant flowers. Growing a Japanese Aralia indoors is a good way to make your environment green. There is no need to spend a lot of effort inbreeding, it will be kept in the courtyard, door, window, wall corner and the shade of the building can be, the owner can also appreciate its green appearance at any time.