Trending
You are at:Home»Vegetables»Health Benefits of Fluted Gourd 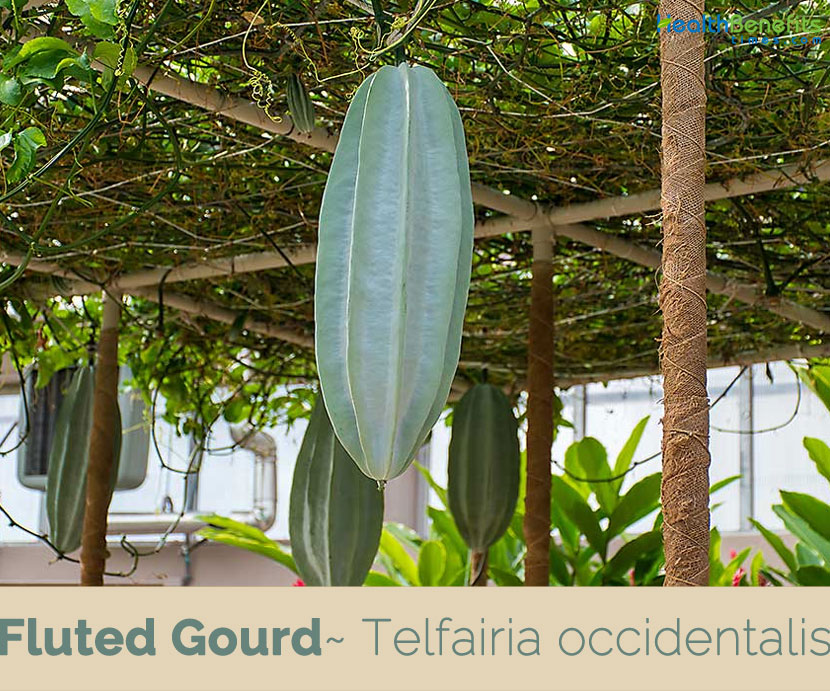 Telfairia occidentalis commonly known Fluted Gourd is a tropical vine grown in West Africa as a leaf vegetable and for its edible seeds. It is a member of the Cucurbitaceae family and is indigenous to southern Nigeria. The fluted gourd grows in many nations of West Africa, but is mainly cultivated in Igboland and Calabarland and it is used primarily in soups and herbal medicines. Common names of the plant are Fluted gourd, Fluted Pumpkin, oysternut, Apiroko, Calabaza, Emeke, Gonugbe, Iroko, Krobonko, Oysternut, Pondokoko, Ubong, Ugu, Umee, ikong-ubong, Umwenkhen and ugwu.

The plant is a drought-tolerant, dioecious perennial that is usually grown trellised. It is one of the most commonly consumed leafy vegetables in Nigeria, used both for culinary and medicinal purposes. It is popularly called ugu in Igboland and ikong-ubong in the Efik/Ibibio language, where the young shoots and leaves are the main ingredient of Nigerian edikang ikong soup. The fruits are not edible but consist of edible seeds that are high in protein and fat. Seeds can be eaten whole, ground into powder, or made into a fermented porridge. Seed oil is used in cooking. Young shoots and leaves of female plants of this species are consumed as vegetables. Medicinally, the plant is used for convulsion, malaria, anemia, and cardiovascular diseases.

Fluted Gourd is an herbaceous, ribbed, glabrous, pubescent, perennial vine shrub which climbs by means of bifid and tendrils which are usually coiled. The plant normally grows about 15 meters or more long. The plant is found growing in lowland rain forest, riversides, rain-forest, secondary forest, forest edges, possibly often as a relic of former cultivation. The plant prefers humus-rich, moist and fertile soil. The plant consists of a root, stem, leaves, fruit and seed. The stem has five ridges often covered with multi-cellular hairs, especially when young. The leaves of the plant are compound, usually 3-5 foliate, with blades and petioles also covered with multi cellular hairs.

Flowers are 5-merous, cream colored, pedicel up to 4 cm long, receptacle campanulate, sepals triangular, up to 5 mm long, petals are free, oblong, fringed. Male flowers are with 3 stamens, two 4-locular and one 2-locular, with large reddish connective. Female flowers are similar to male flowers but with inferior, cylindrical, 3-celled ovary and 3 large, heart-shaped stigmas. Fertile flowers are followed by drooping, ellipsoid berry that are 40–95 cm long and 20–50 cm wide. The fruits are initially green when young then turn yellow upon ripening and whitish when ripe. Normally the fruits weights up to 6 kg. The seeds are embedded within a bright-yellow fibrous endoscarp (flesh). Seeds are compressed ovoid, up to 4.5 cm long, black or brown-red colored and asymmetrically ovate in outline. 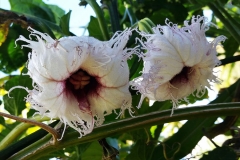 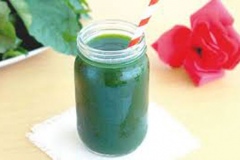 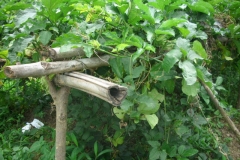 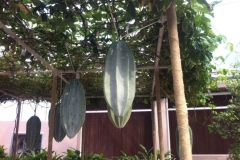 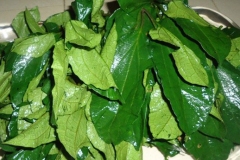 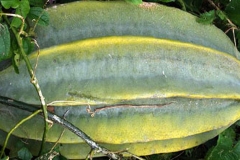 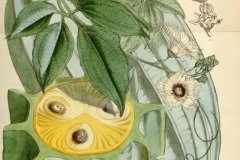 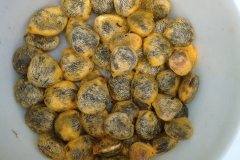 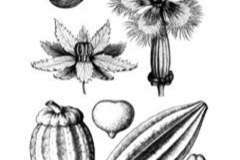 Fluted Pumpkin is supposed to have blood-purifying properties and it has been used as a tonic for the young and old alike. Amazingly though, the roots are poisonous for human consumption.

Fluted pumpkin leaves are a rich source of iron nutrients and will help in preventing the occurrence of anemia. Also, due to the presence of haematinic properties of the Ugu leaves, it will result in positive effects to treat anemia. Therefore, if you suffer from anemia, consuming fluted pumpkin leaves regularly may help you as an alternative and natural medical treatment.

Leaves, shoots and seeds of the Fluted Pumpkin are rich in dietary fiber containing an amazing array of Vitamins, which are essential for building our tissues to repair of scars. Apart from this, the gel like substance formed by the water-soluble fiber helps in slowing down the passage of food through the intestines thus helping in proper digestion and bowel movements.

Since cancer has been stated as the leading diseases which cause the death in the world, then we should find a way to prevent and treat this kind of chronic diseases. The presence of antioxidant and anti-inflammatory properties in fluted pumpkin leaves will help to prevent cancer. Also, leaves consists of chlorophyll, phenolic compounds, saponins, tannins, flavonoids, glycosides, and phytosterols, which possess chemo-suppressive properties, then the leaves are appreciated to prevent the growth of cancer cells in the body.

Fluted pumpkin seed oil can be used for treating infertility in male by boosting the functionality of the testicles for an increased sperm count. This is as a result of the high level of anti-oxidative properties such as oleic acid, vitamin A, alkaloids, tannins and linoleic acid in the oil that contains the lipid peroxidation activities thus boosting fertility. Moreover, vitamin A is a powerful vitamin for protecting the testis against lipid peroxidation, thus improving spermatogenesis and structural differentiation of epithelial cells of the epididymis.

It is known that fluted pumpkin leaves have a role to be anti-malaria properties. As a result, this benefit is related to the presence of anti-plasmodial and schizonticisal properties contained in Ugu leaves. Also, by having these properties, they are capable of treating parasitic malaria infection.

Researchers have shown that by consuming fluted pumpkin leaves, it will help to prevent diabetes. Indeed, the aqueous leaf extract of Ugu acts as anti-diabetic properties which help to reduce and regulate the glucose level of diabetic patients. Additionally, this great benefit is also associated to the presence of ethyl acetate and polysaccharides content which are anti-diabetic properties of the leaves.

Consuming fluted pumpkin leaves will help to reduce stress and depression as well. This benefit is connected to the presence of antioxidant nutrients such as tocopherol, dismutase, catalase, glutathione reductase and ascorbic acid contained in Ugu leaves. Then, if you face some hard days, it is recommended to have fluted pumpkin leaves as your food option.

Hearing about Alzheimer’s disease may make you worry about having this kind of diseases. However, by consuming fluted pumpkin leaves, then you should not worry again as the leaves consists of certain antioxidant compounds that can prevent the enzymes involved in the development of Alzheimer’s disease.

Fluted pumpkin leaves are rich in vitamin and minerals and have shown the positive result to be immune system booster. Also, as the leaves consist of antioxidant source, it will help to maintain overall body health for sure.

14. Improves the Bones and Teeth

Fluted pumpkin vegetable consists of a good amount of calcium that the body needs for maintaining healthy bones and teeth also keep the skeletal systems in normal functioning conditions. It also consists of magnesium which plays a vital role in making the bone firm and strong, it might be surprising to say that without magnesium, calcium is almost ineffective to bones as it helps the satisfactory absorption of calcium by the bones. It also plays the same function on the teeth, as sufficient magnesium in the body helps in making the teeth stronger and firm.

Fluted Gourd leaves have been found effective in treating convulsion in children. It becomes medicinal in this case when sliced and mixed with coconut water and with a small amount of salt. Technically there might be no proof of this, but it has been used hundreds of years ago in the treatment of high fever and convulsion, and serve as a remedy to many other health conditions.

Fluted pumpkin leaves are always suggested for patients who suffer from a shortage of blood due to the effect of certain illnesses; the presence of iron and other important minerals in it contribute in the boosting of blood in the body system and prevent anemia. For the effectiveness of helping boost blood production, it is recommended to be pounded, and then strain the mashed vegetable to collect the liquid/juice. Most times milk is also added to the juice before drinking.

Fluted Gourd contains certain compounds which help to improve memory. It also contains vital nutrients such as vitamins and magnesium which aid in the improvement and normal functioning of the brain and nervous system. This can help in improving cognitive reasoning, memory loss (Dementia) and other health conditions related with memory health such as Alzheimer’s disease.