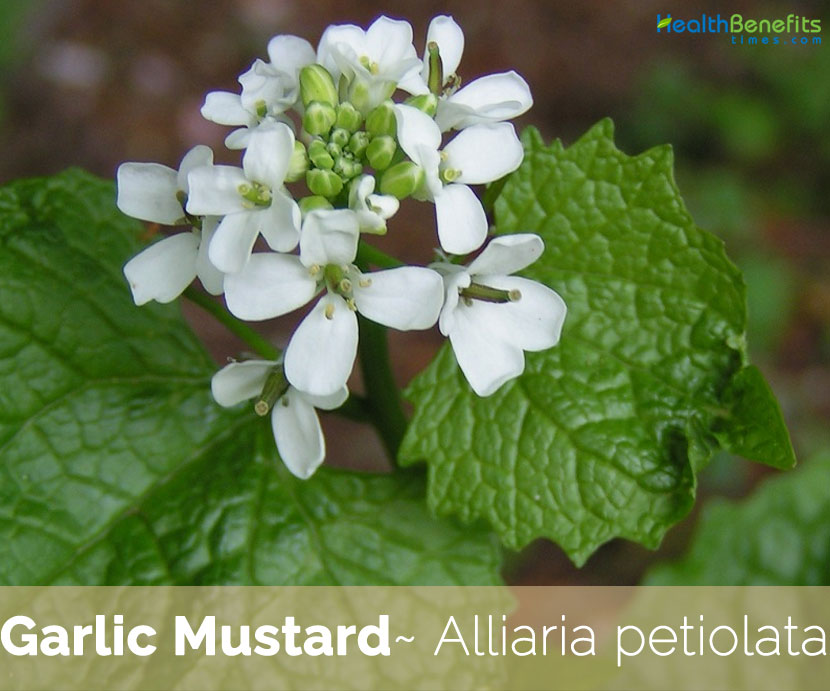 Alliaria petiolata, or garlic mustard, is a biennial flowering plant belonging to the mustard family Brassicaceae ⁄ Cruciferae. The plant is native to Europe, western and central Asia, north-western Africa, Morocco, Iberia and the British Isles, north to northern Scandinavia, and east to northern Pakistan and Xinjiang in western China. Garlic-root, garlicwort, hedge-garlic, Jack-by-the-hedge, Jack-in-the-bush, mustard-root, penny hedge, poor-man’s-mustard, sauce-alone and garlic mustard plant are some of the popular common names of the plant. Alliaria, the genus name, means ‘of the allium family’, and is botanically incorrect; however, as a reference to the odor of these plants it seems quite suitable. The specific epithet petiolata means having petioles – stalks connecting the leaves to the main stems – as indeed the leaves of Garlic Mustard do. Garlic Mustard often grows beside hedges, which is where its alternative common name Jack-by-the-Hedge says that it belongs! All parts of the plant, including the roots, give off a strong odor like garlic.

The common name is derived from the scent of garlic, which is noticeably exuded by its above ground plant parts, especially foliage. The leaves, flowers and fruit are edible as food for humans, and are best when young. They have a mild flavor of both garlic and mustard, and are used in salads and pesto. They were once used as medicine. Garlic Mustard is found in the Himalayas, from Kashmir to Nepal, at altitudes of 2200-3100 m.

Garlic Mustard is an established, cool-season, monocarpic, tap rooted, herbaceous biennial or occasional winter annual plant that grows about 30–100 cm (12–39 in) tall, rarely to 130 cm (51 in) tall. The plant is grows singly in hedges, fence rows, open woods, disturbed areas, deciduous forest, oak savanna, forest edges, shaded roadsides, urban areas, riparian zones, ruderal/disturbed, floodplain forests, along trails,  fence lines, swamps, ditches, roadsides and railway embankments. It grows on sand, loam, and clay soils, and on both limestone and sandstone substrates, and is rarely found on peat or muck soils. The plant has a slender, white, taproot with a distinctive “s” curve at the top of the root, just below the root crown. Stems are erect and sparsely hairy and unbranched below the inflorescences. They can grow over 90 cm tall but are generally between 30 and 46 cm tall.

The leaves of 1st year plants are up to 2 inches long and across. They are cordate-orbicular with margins that are dentate or wavy and their upper surface has a reticulated network of veins. The petioles of these basal leaves are rather long and slender. The alternate leaves of 2nd year plants have a similar appearance, except that they are usually longer than wide, spanning up to 3 inches long and 2 inches across. The lower and middle leaves along the stems are usually cordate with either acute or blunt tips, while the upper leaves are often ovate. Both the stems and petioles of 2nd year plants are occasionally hairy, otherwise they are glabrous like the blades of the leaves. The foliage is often light green or yellowish green in appearance, otherwise it is medium green. New leaves produce a distinct garlic odor when crushed. The fragrance fades as leaves age, and is virtually non-existent by fall.

Plants usually produce a single unbranched or few-branched flower stalk, although robust plants have been recorded with up to 12 separate flowering stalks. Flowers are produced in spring (usually April to May) in terminal racemes, and occasionally in short axillary racemes. Garlic mustard flowers are easy to recognize. The outside of the mustard flower has four sepals, usually green. The flower itself has four petals usually arranged in the shape of a cross. It has six stamens: four are tall and two are short. Flowers usually appear in a cluster. Each flower measures 1 to 1.5 cm across. Flowers can appear at any time throughout the growing season of year two of the plant’s growth.

Fertile flowers are replaced by narrow seedpods that are called “siliques.” These seedpods are linear, 2.5 to 6.0 cm long and about 2 mm wide and are narrowly cylindrical. A single plant can produce two to over four hundred fruits (with an average of twenty-two per plant). The fruits ripen between mid-June and September. Fruits are initially green maturing to pale grey brown. Each fruit contains approximately sixteen seeds. Seeds are black, cylindrical about 3 mm long and 1 mm wide and transversely ridged, and range in weight from 1.62-2.84 mg. A single plant is capable of producing up to 8000 seeds in a single season! Seeds are contained in tan seedpods that are capable of ejecting the ripened seeds several feet away from the stem of the plant. Seeds must lay dormant for at least one year before germinating in the spring. Cold stratification is required to trigger seed germination. The seeds can remain viable in the soil for up to five years (a factor that further complicates the removal of an established garlic mustard population). Seeds can be transported great distances on boots of hikers or even on the tires of vehicles. 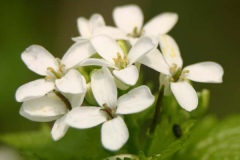 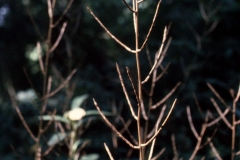 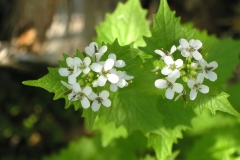 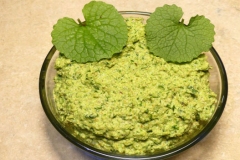 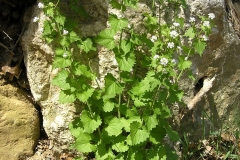 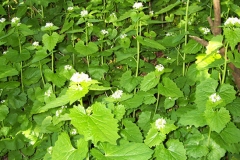 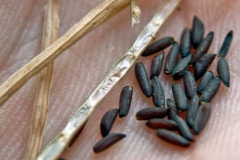 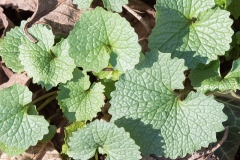 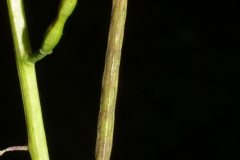 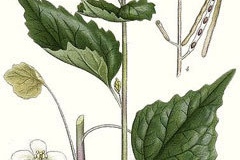 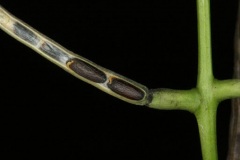 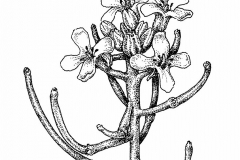 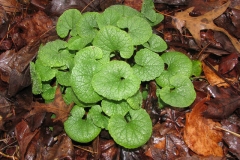 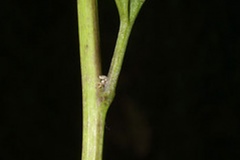 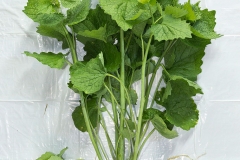 The goal of any A. petiolata management program must be to prevent seed production. Because of the presence of a seed bank, whatever control method is employed, it must be continued for a period of no less than 3 years in order to eradicate the species locally. A. petiolata is not effectively controlled by grazing, and is under little to no vertebrate herbivore pressure in North America. Cavers et al. noted no grazing from white – tailed deer and only occasional consumption by cows in Ontario, Canada, resulting in an unpleasant taste to the milk.

Hand pulling is an effective approach for control, particularly with small or newly formed populations. When the plants have fastened in the second growing season, the stem may be easily grasped and pulled; roots will usually come out intact along with the stem. Because the fruit is photosynthetic, if fruit development has started, plants should not be left on site or hung from neighboring vegetation as the fruits are well known to continue to develop and dehisce even while lying on the ground, thus plants should be bagged and taken off site. Given the presence of a seed bank, repeated visits to a habitat over a number of years will be required to eradicate the plant. Likewise, cutting may provide good control, but cutting at ground level is important as plants that have been mown often respond by sending up new flowering shoots from the root crown. Nuzzo found that plants cut at ground level had 99% mortality and no seed production, whereas plants cut at a height of 10 cm had 71% mortality and seed production reduced by 98%. The use of cutting must be weighed against various factors, for example, certain other species that may be growing in association with A. petiolata such as native Trillium spp. are severely damaged by cutting.

Foliar application of herbicides can be used to control A. petiolata where mechanical methods are impractical due to population size. Glyphosate, triclopyr, and mecoprop have all been used effectively to control A. petiolata, and because these herbicides are not target specific, they should be applied to A. petiolata during the dormant season where the plant is in the rosette stage and native vegetation has not yet emerged. However, biologically active temperatures are also usually required for certain herbicides to be effective. Thus, the window of time for application may be narrow. Acifluoren, bentazon and 2, 4-D is not recommended for control of A. petiolata.

There is currently no known biological control program in use to control A. petiolata. However, Blossey et al. indicate that they are investigating a variety of species for possible use as biological control agents. Although A. petiolata is under virtually no herbivore pressure in North American habitats, over 70 species of insect herbivores and seven fungi are associated with this plant in Europe. Many are not sufficiently host specific to use for control; five monophagous weevils and one oligophagous flea beetle are being further investigated in an effort to develop a concerted suite of attack agents for the seeds, stems, and roots.

Nuzzo suggests that a suite of cutting, chemical, and fire control methods can be adopted for eradication as long as they are applied sequentially for 3 years or more to exhaust the seed bank. The use of fire as a control method for A. petiolata has been well studied, but the results are somewhat conflicting. Nuzzo found that fire reduced populations of A. petiolata and that the effect was related to fire intensity; moderate intensity fires were effective whereas low intensity fires had virtually no effect. As many prescribed fires fall into this latter category, the efficacy of fire alone to control A. petiolata is questionable, but it may be used effectively in combination with other methods. Nuzzo et al. found that A. petiolata was maintained, but in a reduced condition, in forests burned repeatedly for 5 years. However, Luken and Shea found that moderate intensity dormant season fires did nothing to reduce A. petiolata abundance, and in many plots the species actually increased in abundance relative to control plots. The use of fire as a management tool should be integrated with other management objectives given the manifold effects it has on a habitat. 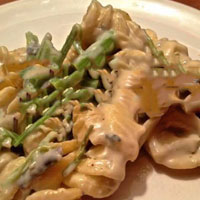 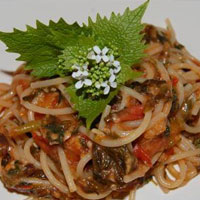 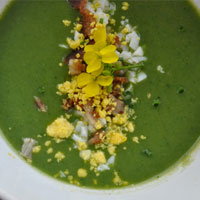