Trending
You are at:Home»Herbs and Spices»Facts about Giant Hogweed ~ Heracleum mantegazzianum 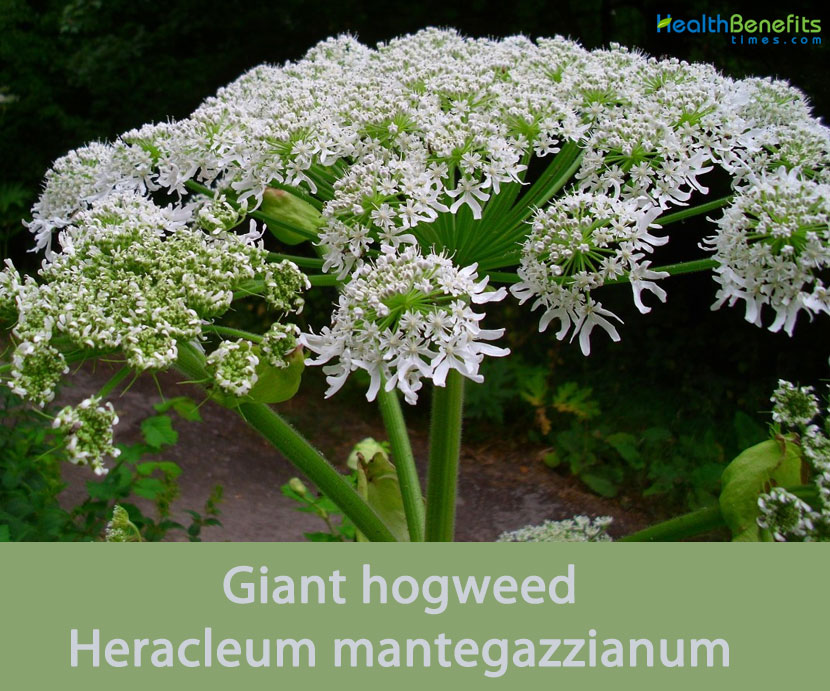 Heracleum mantegazzianum, commonly known as giant hogweed is a monocarpic flowering plant in the carrot family Apiaceae ⁄ Umbelliferae. It is also known as giant cow parsley, hogsbane, Cartwheel flower, Giant cow parsnip, Giant hogweed, Hogweed, Mantegazzi’s Cow-Parsnip, Siberian cow-parsnip and wild rhubarb. In New Zealand, it is also sometimes called wild parsnip (not to be confused with Pastinaca sativa) or wild rhubarb. The plant is native to western Caucasus region of Eurasia. It was introduced to Britain as an ornamental plant in the 19th century, and has also spread to other areas in Western Europe, the United States, and Canada. Its close relatives, Sosnowsky’s hogweed and Persian hogweed, have similarly spread to other parts of Europe.

Genus name comes from a variant of the Greek words herakleia or panakes herakleion in honor of Hercules (Gr. Herakles). The species name mantegazzianum refers to Paolo Mantegazza (1831–1910), Italian traveller and anthropologist. Sap of giant hogweed is phototoxic and causes phyto photo dermatitis in humans, resulting in blisters and scars. These serious reactions are due to the furanocoumarin derivatives in the leaves, roots, stems, flowers, and seeds of the plant. Thus, it is considered to be a noxious weed in many jurisdictions.

Giant hogweed is a very large, herbaceous biennial or monocarpic perennial forb that is well-known for producing rapid and prodigious growth often to the detriment of native plants. It is about 2 to 5 m (6 ft. 7 in to 16 ft. 5 in) tall and under ideal conditions, a plant can reach a height of 5.5 m (18 ft. 1 in). The plant is found growing in meadows, clearings, forest edges, valley bottoms, forest clearings, abandoned grasslands, riparian areas, open woodlands, abandoned pasture, agricultural lands, roadsides, vacant lots, streams and rivers, creeks, ditches, rights-of-ways and uncultivated or waste lands. The plant prefers deep, moist soils with nearly neutral pH and moderate to high nutrient content. Soil textures in giant hogweed habitats may be gravels, sands, loams, or clays. Moist soils are preferred, and waterlogged and winter-flooded soils are tolerated but extended periods of flood are not preferred.

Plant produces thick, branched taproot and tightly clustered, fibrous roots. Roots extend 18 to 24 inches (45-60 cm) deep. Lateral roots are often finer than vertical roots. Root’s thickness and branching increase with plant age and result in a multi-taproot system. Root crown can grow to 6 inches (15 cm) in diameter and becomes lignified when giant hogweed reaches flowering age. Root crowns are often found up to 5 inches (12 cm) below ground. Root crowns have contraction rings capable of shrinking the area between the crown and the shoot and protecting the hypocotyl from extreme temperatures.

The hollow stem of giant hogweed is coarse, stout, ridged with protruding white hairs that are noticeable at the node and base of the petiole. The stem is mostly green in color with purple blotches that contrast easily with the white hairs. Stems can grow to a height of 10 to 15 feet and measure between 2 to 4 inches in diameter. 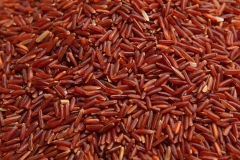 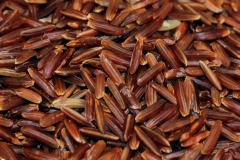 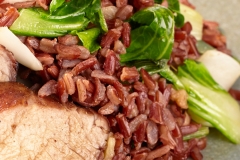 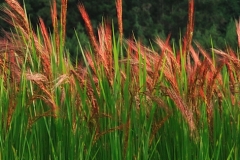 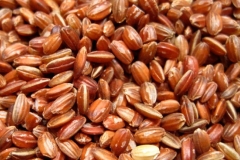 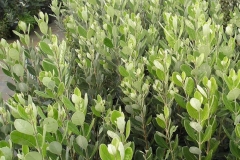 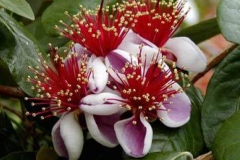 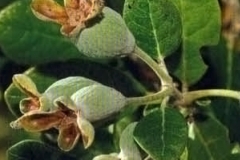 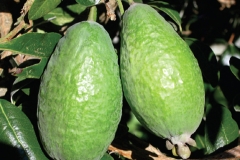 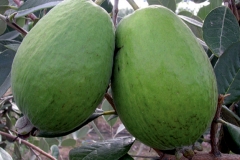 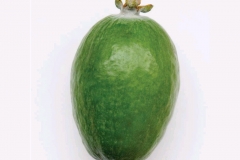 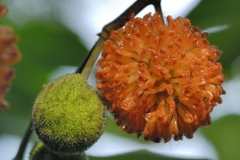 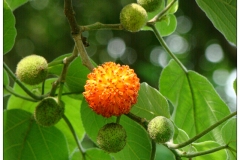 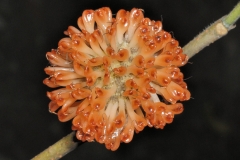 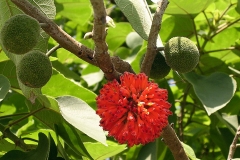 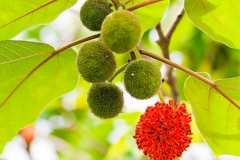 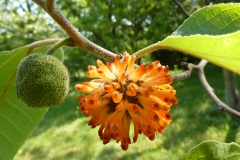 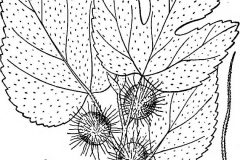 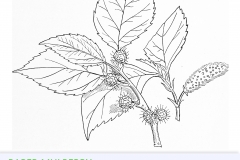 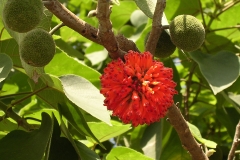 The plant has been a popular ornamental plant because of its massive size and eye appeal. Leaves are ternately compound and unfold in the early summer into deeply incised, lobed leaves measuring up to 5 feet in width. The leaflets attached higher on the stem are not as large, are triangular-lanceolate, and deeply cut. Giant hogweed has an alternating leaf arrangement. The plant remains in the rosette stage until it develops sufficient root reserves to initiate flower formation.

Lower leaves are 1-2.5 meters long, compound, irregularly shaped in ternate or pinnate segments, deeply lobed, and irregularly toothed. Upper leaves are smaller and sometimes not divided with longer petioles and more inflated sheaths. Leaves are usually pubescent on the underside when young and glabrous above.

Whitish or greenish white flowers appear in mid-June and are clustered in umbel shaped heads which can measure up to 1 m across. Umbels are an umbrella-shaped cluster of short-stalked flowers, typical of plants of the carrot family. Each compound umbel can have 50-150 rays (separate stem) which can lead to a single plant producing well over 50,000 flowers. Individual flowers are on pedicels 10-20 mm long and have petals up 12 mm long. Terminal umbels are the largest and are surrounded by satellite umbels and additional umbels may occur on auxiliary stems. Sometimes a plant does not flower until one or two years later. After flowering and fruiting, the plant dies. Unfortunately each large flower umbel has about 20,000 seeds.

Fertile flowers are followed by dry schizocarps consisting of two mericarp seeds 6-18 mm long, 4-10 mm wide and about 1 mm thick, which are joined until ripening. Mericarps are elliptical, flattened, and emarginated at the apex with thin low dorsal ridges and broadly winged lateral ridges. It is tan in color with brown lines (so-called oil tubes) extending 3/4 of the length of the seed. The endosperm is oily and mature fruits have a strong resinous smell

Mature seed of the current year is dormant and will not germinate until the following spring at the earliest. Dormancy of these seeds is overcome by cold and wet weather conditions that occur during normal winters in Ohio. Seeds can remain viable in the soil for many years. Water, especially in flood plains, and wind are the primary dispersal mechanisms for giant hogweed seed; however, animals may account for some dispersal. The most efficient seed dispersal is known to be through human activity.

What to do if you are exposed to Giant Hogweed

Four to five years of prevention of seed production, with treatments to remove adult plants, and suitable turf re-establishment seem adequate for eradication of a local population

Property managers and cooperators may use these strategies:

Seed heads should be removed to reduce reproduction. Mowing does not appear to be effective. The Pennsylvania Department of Agriculture (PDA) has used a roto-tiller and planted a lawn seed mix to return previously infested areas to a natural state. The tillage appears to speed up depletion of the seed bank.

Glyphosate is an effective herbicide, but it should be used with caution around desirable plants, and is more likely to require multiple treatments: it should also be applied before flowering. The herbicides 2, 4-D, TBA, MCPA, and dicamba may burn down foliage, but are not effective in controlling perennial GHW roots. Rodeo (glyphosate) has been recommended for wet areas. Protective clothing should be worn when applying herbicides or removing seed heads. In urban areas, plant materials should be double bagged in plastic, and buried or incinerated in an approved facility. Other chemical recommendations are available.

In Switzerland 12 phyto-phagous insect species found on native hogweed have been identified as possible candidates as biological control. Cattle and pigs are cited as possible bio-control agents.

GHW has naturalized in many of the places where it was first introduced. The plants thrive in many habitats but do particularly well where the soil has been disturbed, such as on wasteland, on riverbanks, and along railroads. It prefers moist soil and can quickly dominate ravines and stream banks. It can tolerate full shade, but prefers partial shade to full sunlight. Forest clearings and edges are a preferred habitat for GHW.

Giant Hogweed is both a public health and environmental hazard, since humans, as well as dogs and other animals may be sensitive to its sap. Furocoumarins in GHW sap cause a skin reaction known as photo-dermatitis or photo-sensitivity. Exposure to the sap in sensitive individuals sensitizes the skin to UV light in sunlight and results in long-lasting swelling, blisters and eruptions of affected sites. Hyper-pigmentation in the affected area may remain for a year or more. In the 1970’s, many cases of poisoning were seen in Great Britain where children played with the hollow stems of the plant as pea-shooters or telescopes. In 1998, cyclists complained that contact with “large green plants” left their legs covered in broken and bleeding skin. Contact with the eyes can lead to temporary or permanent blindness.