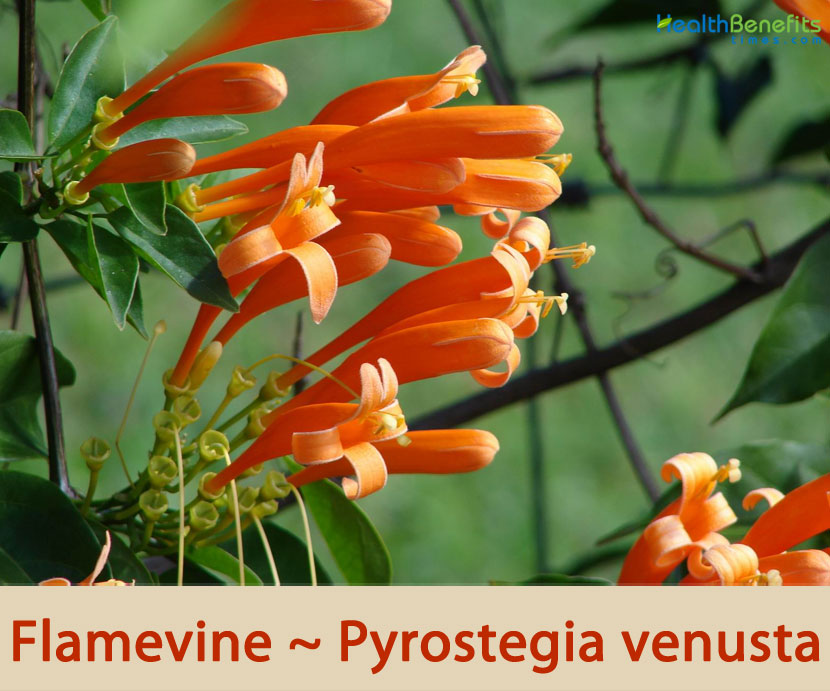 The genus name comes from the Greek and is descriptive of the color of the flowers (that is ‘pyro’ meaning flame so red or orange flowers and ‘stege’ meaning covering). The specific epithet is from the Latin word ‘venustus’ meaning beautiful. This plant has been known variously as Bignonia ignea and Pyrostegia ignea, but these names have now been superseded. At a time of year when there isn’t much in the way of eye-catching color, flame vine dazzles with dense clusters of bright orange flowers. This evergreen vine can bring a touch of classic fall colors to your Florida garden. It is commonly grown in tropical and subtropical areas, as well as in mild Mediterranean climates. The plants form dense masses, growing up trees, on walls or over rocks, and are covered with flowers in the cool, dry season.

Flamevine is a vigorous, fast-growing, evergreen woody flowering vine that normally grows about 5-7 m tall. The plant can spread quickly by tendrils to the top of whatever supports it, including fences, other plants or even small buildings by branching profusely and climbing using its clinging tendrils. The plant is found growing in rocky places, forests in seasonally dry areas and scrub. The plant prefers compost enriched, light and moist, but well-drained soil. It tolerates several kinds of soils: acidic, alkaline, clayey, sandy or loamy, but is intolerant of saline soils. Stems are angular to sub-cylindrical, striate, puberulent or lepidote, interpetiolar zone not glandular; cross section of the mature stem with peripheral phloem tissue not forming a cross. Flame Vine has been listed as possibly invasive in some regions as it can easily regrow from its roots even if damaged above ground.

Leaves are opposite, compound 4–10 cm long often with terminal leaflet modified into a coiled 3-branched tendril 5–15 cm long; leaflets 2 (or 3) are ovate to lanceolate or ovate-elliptic/oblong, mostly 3–9 cm long and 2–4.5 cm wide,  glabrous. Often, the center leaflet is modified into a coiled, three-parted tendril.  Apex is acuminate with entire margin. Petiole is 5–15 cm long, sparsely hairy and petiolules is 5–15 mm long. There may be a combination of compound-bifoliate leaves (often with a tendril between folioles/leaflets) and trifoliate leaves; the 3-tipped tendrils often coiling but absent from many leaves. They’re arranged in pairs, opposite each other on the woody and slender stems and sprawling branches. 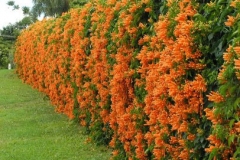 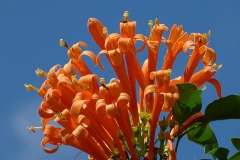 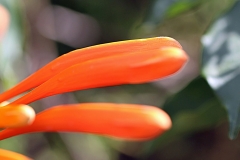 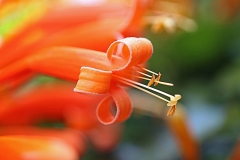 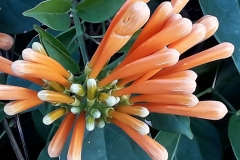 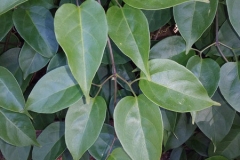 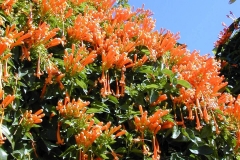 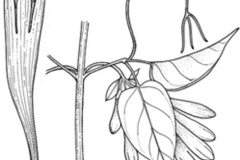 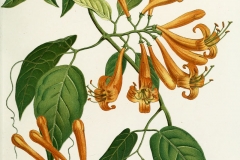 Orange Trumpet Creeper is a floriferous climber that flowers almost continuously throughout the year in the tropics, and in the subtropics from late fall to spring, even lightly during summer. The tubular flowers are about 3 in long and borne in clusters of 15-20 at the tips of branches. Calyx is 4–7 mm long, almost entire to shallowly lobed and minutely 5-dentate. Corolla usually 5–7 cm long, orange or reddish orange; tube ± curved, very narrow at base, broadening above; lobes 10–18 mm long, margin and often upper parts of outer and/or inner surfaces hairy. The flower clusters may hang down under the weight of their own beauty. The long-lasting, brilliantly colored and attractive flowers are a magnet for hummingbirds, bumble bees and butterflies too!

Fertile flowers are followed by narrow, light brown, cylindrical dry capsules about 1 ft. long, with the mid vein slightly prominent. Seeds are numerous, 1.2-1.4 cm long, wings brown with the margins hyaline that can be used for propagation.

Traditional Uses and benefits of Flamevine