Trending
You are at:Home»Herbs and Spices»Health benefits of Goodluck plant 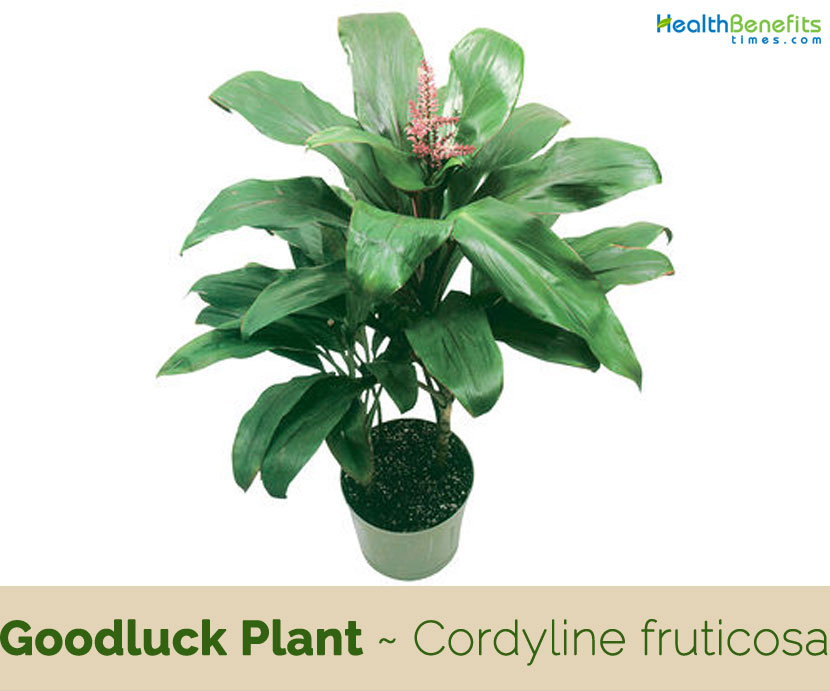 Goodluck Plant, also referred to as Ti Plant, Palm-lily, Ti, and Tree-of-kings is an evergreen shrub belonging to Asteliaceae family. The plant is native to Southeast Asia and Papua New Guinea, but was carried throughout much of the Pacific by early Polynesians. It is now widely cultivated and sometimes naturalized in these areas including northeastern Australia, New Zealand and the Pacific Islands. Boundary Marsh, Broadleaf Palm-lily, Cabbage Palm, Chinese Fire Leaf, Cordyline, False Palm, Good Luck Plant, Hawaiian Ti, Hawaiian Ti Leaf, Hawaiian Ti Plant, Palm Lily, Polynesian Ti Plant, Ti Plant, Tree Of Kings are some of the popular common names of the plant.

Genus name comes from the Greek word kordyle meaning a club. Specific epithet means shrubby or dwarf. The plant is of great cultural importance to the traditional animistic religions of Austronesian and Papuan peoples of the Pacific Islands, New Zealand, Island Southeast Asia, and Papua New Guinea. It is also cultivated for food, traditional medicine, and as an ornamental for its variously colored leaves.

Good luck Plant is an erect, evergreen shrub that grows about 3 to 4 m (9.8 to 13.1 ft.) tall and spread of 1 m with a strong usually un-branched, slender, woody stem with rings of leaf scars and enlarged tuber-like subterranean rhizomes. The plant is found growing in abundant in various types of forest (dry, dense, edges), on forested ridges, in thickets, and sometimes near beaches. It grows well in well drained, fertile sandy loams. The plant become warty and slightly cracked, with horizontal rings, not divided into bark and wood. Within the thin brown outer layer, the trunk is whitish, soft, and bitter.

Leaves are alternate but very crowded in a spiral at end of erect stout hairless branch, with stout grooved greenish leafstalk of 2–4 inches (5–10 cm), hairless. Blades are narrowly oblong, 7–18 inches (18–45 cm) long and 2–4 inches (5–10 cm) wide, broadest near middle and gradually narrowed to long-pointed ends, not toothed on edges, thin and flexible, with many long fine parallel veins, shiny green on both surfaces, leaving a ring scar.

Flower clusters (panicles) are large, arising from center of cluster of leaves, 12–15 inches (30–38 cm) long, curved and branched. Flowers are many, stalk less on slender drooping branches, from narrow whitish buds 0.5 inches (13 mm) long, tinged with purple, composed of narrow calyx whitish tube with six pointed lobes curled back, six yellow spreading stamens inserted in throat, and white pistil with three-celled ovary and slender style. Flowering normally takes place from November-March. Fertile flowers are followed by round, three-parted, berries rarely formed, about 0.4 inches (6 mm) in diameter containing several to many seeds. The fruits are initially yellow, turning to bright red as they mature. Seeds are few and are shiny black. 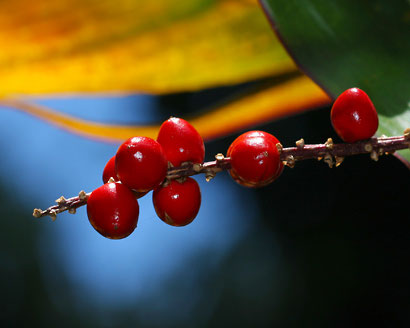 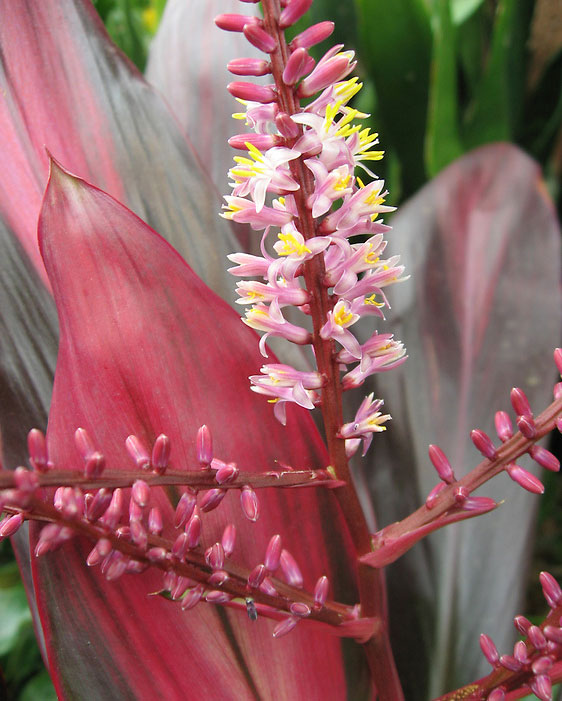 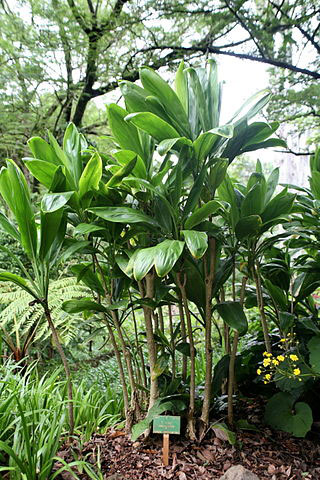 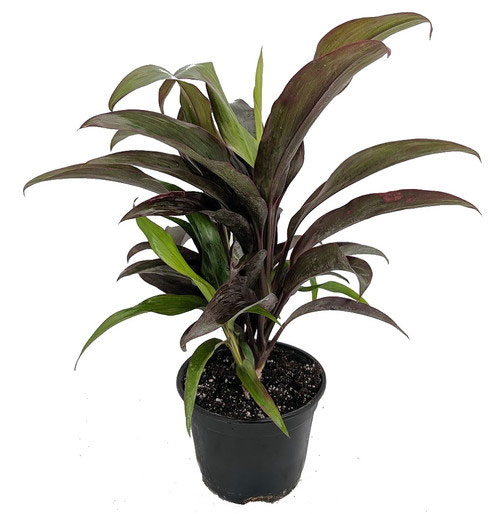 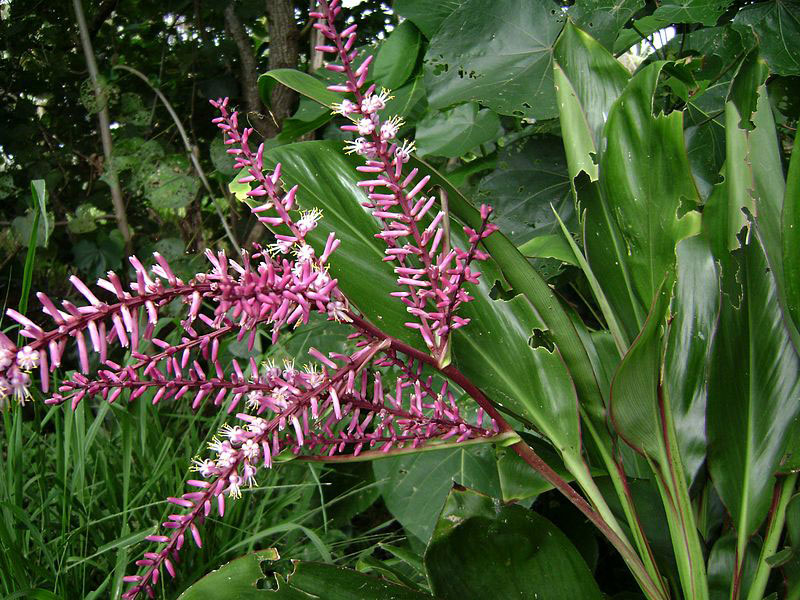 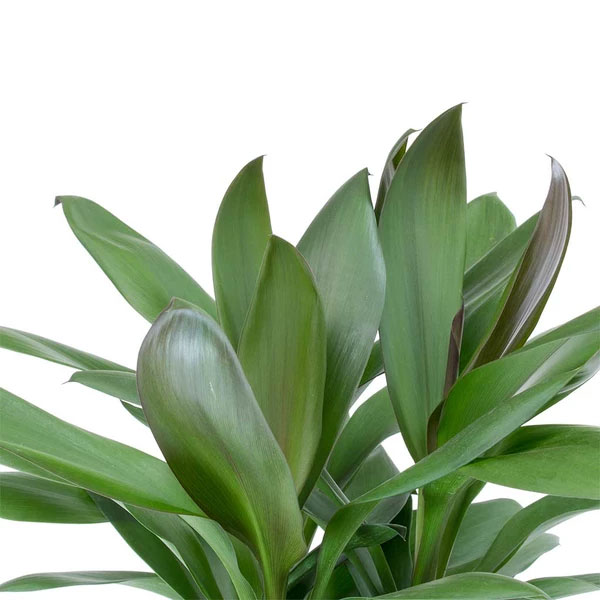 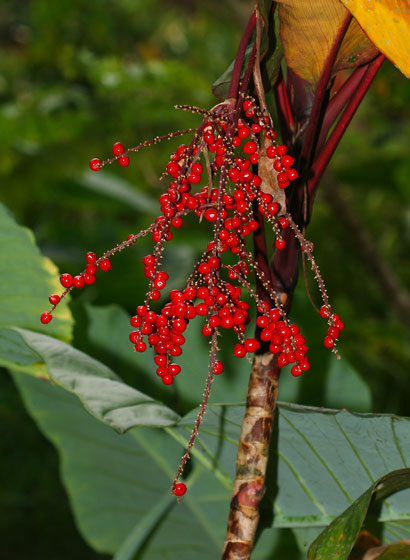 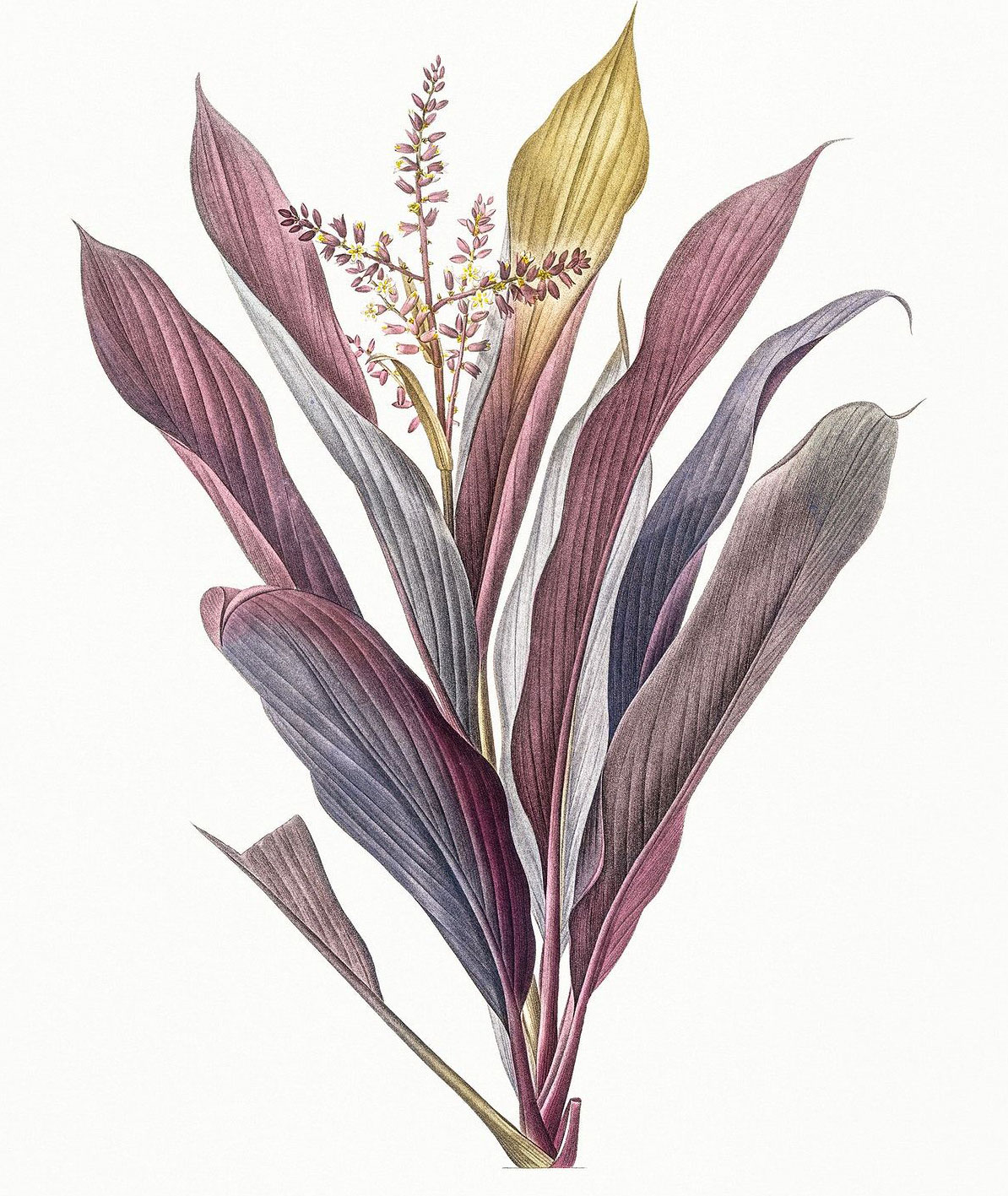 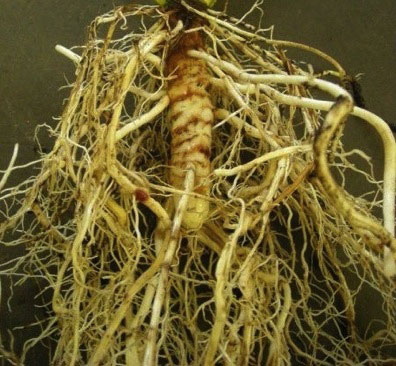 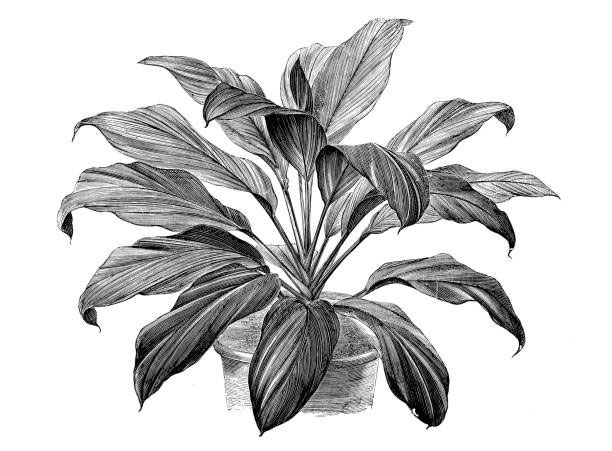 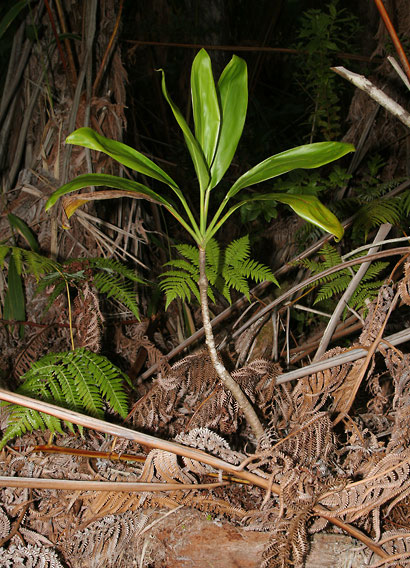 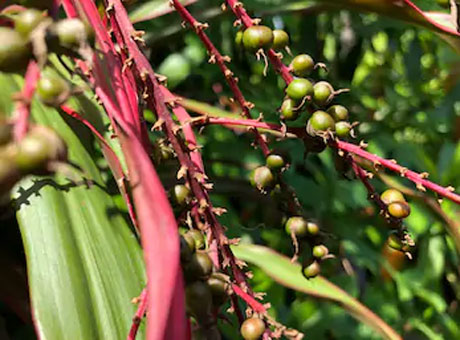 One of the most common benefits from Goodluck Plant is its capability as an anti-inflammation or swelling of the gums. You can apply the ti plant leaf by smoothing the leaves and, mix with a little salt and apply on the swollen gums. Your gums will quickly heal and minimize the pain.

Juice expressed from the leaf after heating it is the remedy for sores and pimples of the Tok Sisin tribe in Papua New Guinea. Fijian makes use of this juice to treat earache, sore eyes and eczema. Roots cure toothache and laryngitis while the outer rind of the flower stalk is used in the treatment of syphilis.

Hemorrhoids usually occur in people who drink less, less of physical activity, and sit too much, and didn’t consume sufficient fiber. The disease can be recognized by the presence of a mixture of blood stains on the feces (fese) when you defecate. When it gets worse, it will be very disturbing because you will have difficulty to sitting, anemia (lack of blood) and many others. To use Ti Plant as for treat Hemorrhoids, you simply combine 7 pieces of purple leaves and 3 sheets of Ti Plant leaves. Wash and crushed both then boiled with 3 cups of water until it remaining 2 cups. Drinking routinely 2 times a day until the hemorrhoids you suffer are completely healed.

Sometimes health problems make the sufferer freaked because of something strange in urine color. This change is recognized by urine that mixed with blood and make the urine color becomes reddened and painful when urinating. To overcome this disease, boil 600 gm. roots and leaves of ti plant using 3 cups of water until the remaining about 2 cups. Drink regularly 2 times a day (morning and night), each 1/2 cup for one time consumption.

Dysentery is a problem related to the digestive system and there are symptoms such as mucus feces, repeated diarrhea and many others. To heal this problem prepares the leaves and roots of ti plant that have dried and then boil until it boiling. Drink 3 times a day on a regular basis until healed.

Every woman could experience this problem and it is a very familiar. Ti plant leaves have a unique ability so that your menstrual period can run normally. All you have to do is boil the roots and leaves with water and drink regularly.

Goodluck Plant is believed to prevent the growth of tumor cells and cancer in the body. This can be done with a simple step. Just a precaution, drink potion from Ti Plant regularly at least once a week.

Asthma is a disease related with the respiratory system due to a disturbance and it can also be caused by genetics factor. Asthma is also called shortness of breath so that people will find it difficult when they want to breathe. To overcome it you can consume the decoction of leaves and roots of ti plant plants.

Severe cough occasionally also carries blood due to infection. To cure it, you can boil the leaves, roots and flowers of Ti Plants that have been dried and drink it regularly as much as 3 times a day.

Ulcer is a disease caused due to uncontrolled stomach acid that causes nausea, lack of appetite, and often stomach pain. You can overcome this problem by consuming boiled leaf regularly.