Trending
You are at:Home»Fruits»Facts about Hardy orange 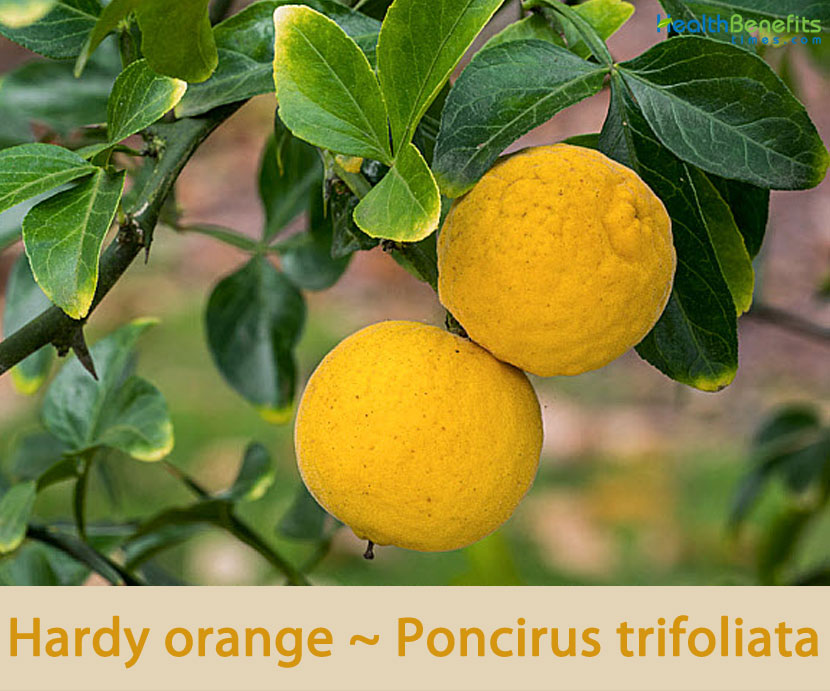 Bitter Orange, Hardy orange or Japanese Bitter oranges, botanically classified as Poncirus trifoliata, are small, sour fruits that grow on deciduous, thorn-laden trees that can reach over six meters in height and are members of the Rutaceae family. Whether the species should be considered to belong to its own genus, Poncirus or included in the genus Citrus is discussed. The species is unusual among citrus for having deciduous, compound leaves and pubescent (downy) fruit. The plant is native to North and Central China, Korean Peninsula and Japan. Some of the popular common names of the plants are bitter orange, hardy orange, trifoliate orange, Japanese hardy orange, Japanese bitter-orange, Chinese bitter orange, citrange, citrangequat, flying dragon, mock orange, trifoliate and trifoliata Orange. Genus name comes from the French word poncire a kind of citron. Specific epithet refers to the three-lobed leaves.

Japanese Bitter oranges are different from other citrus varieties and are not considered true citrus, but are one of the few hardy orange varieties suited for colder climates. It is a popular ornamental tree in Asia and North America, used for their unusual twisted, tightly woven branches, and is also preferred for their hardiness, being used as parent fruit in breeding new citrus and being one of the oldest varieties of rootstock used in the citrus industry today. Its fruits are extensively used to alleviate symptoms of various disorders. The mature fruit possesses anticancer and anti-inflammatory activities. Extracts of the dried, immature fruit are widely used as a traditional medicine for ameliorating symptoms of digestive dysfunction in East Asia.

Hardy orange is a thorny, well-branched, deciduous, sparsely -leaved shrub or small tree that normally grows about 8-20 ft. (2.4-6 m) tall and about 5-15 ft. (1.5-4.5 m) wide with characteristic crooked, twisted and tangled green shoots and branches, armed with large, sharp, 3–5 cm long spines. Bark is noticeably green striped. The plant is found growing in hedgerows, pastures, vacant lots, along streams, woods in mountains and hills, woodlands, forest edges, fencerows, and urban green spaces. The plant prefers fertile, well-drained soil, but prefers a fertile light sandy soil in a sunny position. The plant is a fairly cold-hardy citrus (USDA zone 6) and will tolerate moderate frost and snow. Because of its relative hardiness, citrus grafted onto Citrus trifoliata are usually hardier than when grown on their own roots.

Hardy Orange is used as a root stock for grafting other citrus species. It is the coldest hardy of the citrus species, and other species are hardier when grown on this rootstock. It has also been widely planted as a hedge to contain livestock or prevent trespassing. Many birds prefer to nest in this species as it is difficult for many predators to reach their nests because of the spines. Hardy Orange can easily be grown from seed, and is often available through nurseries.

Deciduous leaves are alternate, compound (trifoliate), and 1 to 2 in. long, may be finely wavy toothed and thickened. Terminal leaflet are obovate to elliptic, 2.5-6 cm long, apex obtuse or emarginate, base wedge-shaped and shiny dark green, lateral leaflets are similar but smaller.  Petiole is 8-20 mm long and often winged. Leaves emerge yellowish-green in spring, turn glossy dark green in summer and fade to yellow in autumn.

Flowers are almost sessile, fragrant, solitary, terminal or axillary, 3–5 cm (1.2–2.0 in) in diameter, larger than those of true citrus but otherwise closely resembling them, except that the scent is much less pronounced than with true citrus. Number of calyx is 5 and is segmented. Petals 5, white, obovate, 2 mm and is shortly clawed. Stamens pink, 20–23, free. Ovary is 6–7-locular. Flowering normally takes place in between April to May. 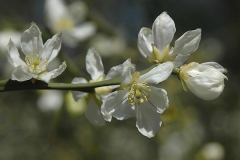 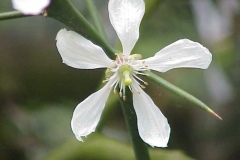 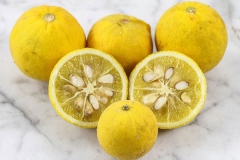 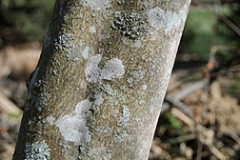 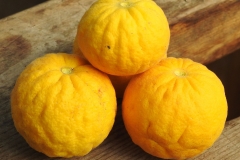 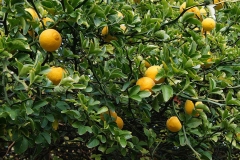 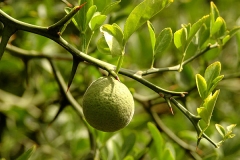 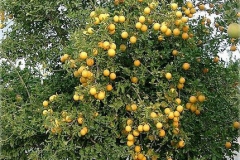 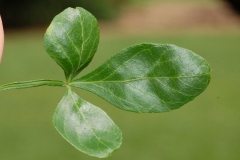 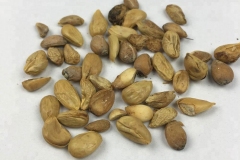 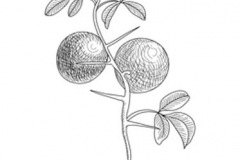 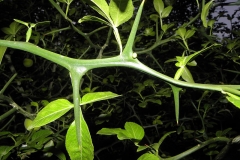 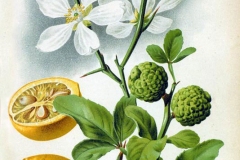 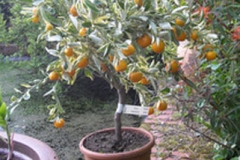 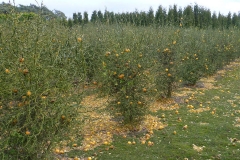 Fertile flowers are followed by a globose, hairy fruit that is about the size of a golf ball about 3–5 cm in diameter, rough, finely pubescent and fragrant. The rind has a downy coating that creates a fuzzy texture and is firm, transforming from green to yellow or yellowish orange when it matures. Beneath the surface of the rind, there is white pith that clings to the flesh and is spongy with a cotton-like feel. The flesh (pulp) is greenish, aromatic containing numerous cream-colored glabrous seeds and is divided into 9-10 segments by thin, white membranes. It is very acidic and has a bitter, sour lemon flavor. The fruit is very seedy and tart, but can be used to make drinks and marmalade (use peel zest and pulp). Processing the fruit often leaves a resin-like residue that is difficult to remove. Occasionally fruits are left on the tree where they persist well into winter and often provide significant ornamental interest.

Some evidence suggests that Hardy orange may interfere with blood sugar control in patients with type 2 diabetes. Use with caution and monitor blood sugar levels closely.

Hardy orange might worsen glaucoma. Avoid using it if you have this condition.

Using Hardy orange, particularly in combination with caffeine or other stimulants, might increase the risk of serious side effects in people with a particular heart problem called “long QT interval syndrome” (named after the wave pattern made by an electrocardiogram).

Some studies suggest that Hardy orange, particularly in combination with caffeine, can increase heart rate in healthy people. Other studies have found no such effect on heart rate. So far, there have been no studies of the effect of Hardy orange on people who have an irregular heartbeat. Avoid using Hardy orange, especially in combination with stimulants such as caffeine, if you have an irregular heartbeat.

Hardy orange acts like a stimulant, so it might interfere with surgery by increasing heart rate and blood pressure. Stop taking bitter orange at least 2 weeks before a scheduled surgery.