Trending
You are at:Home»Vegetables»Health benefits of Enoki Mushroom 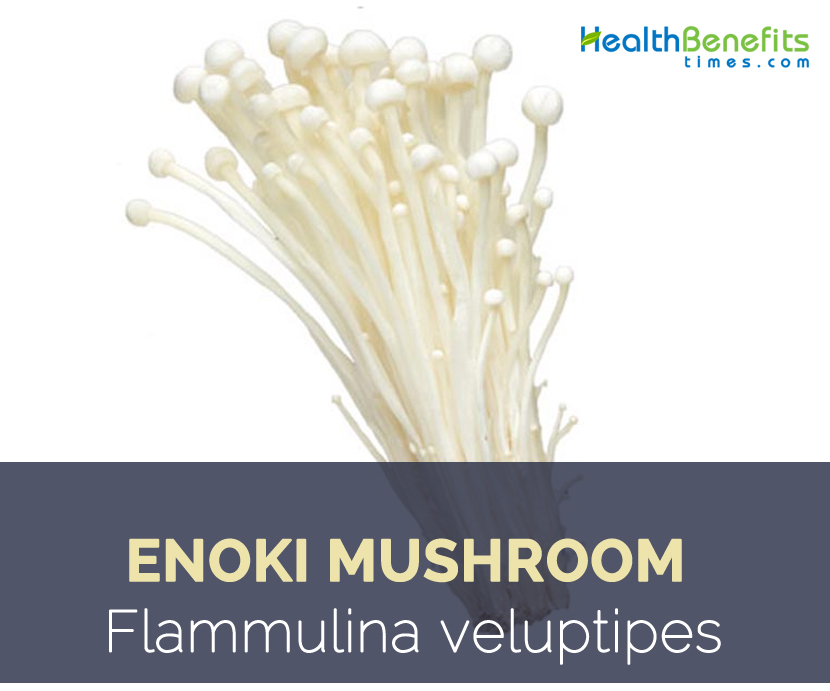 Enoki mushrooms (Flammulina veluptipes) also known as Enokitake mushrooms or even Enokidake mushrooms are actually a long and thin type of mushroom with small caps on one end and is native to China, Japan and Korea. Chinese recognize this particular mushroom as Jingu while Koreans refer to it as “paengi beoseot”. Additionally it is referred to as “Tram Vang” or even “Kim Cham” in Vietnam.

There are many types of Enoki mushroom grown throughout the world, most well-known are off-white, light brown as well as golden colored mushroom. The white variety is generally sold in supermarkets and is often grown in bottles, therefore leaving the bottled impression in the bottom of the mushroom bunch. The wild variety shows the brown as well as gold colors with a thicker stalk. These mushrooms are mostly used in soups in Asian delicacies as well as in salads and stir-fries. Enoki’s mild flavor leads to absorbing whatever other ingredients are utilized together with it. Enoki mushroom are sold fresh and bottled. When selecting Enoki mushroom fresh, it is critical to search for a clean texture as well as firm caps, preventing any symbol of sliminess, indicating they’re overdue their use time. Compared with other well-known Asian mushrooms, Enoki’s expected life even refrigerated just isn’t long therefore it is vital that you utilize it comparatively soon after buying.

All through Asian history, physicians considered Enoki shares most of the health advantages of other Asian mushrooms, which includes its overall immune enhancing qualities, anti-cancer abilities, helping in liver illnesses, stomach issues, high cholesterol levels, high blood pressure levels as well as anti-aging. Enoki is frequently utilized in Asian herbal remedies/tonics for cancer patients in addition to overall health boosters. Lower in calories and high in nutritional content, Enoki mushroom has always been included in daily meals in Asia.

Enoki has got enoki linoleic acid as well as enoki chitosan along with being loaded with dietary fiber. Raw enoki mushroom have been proved to include around two times the fiber of cabbage. Linoleic acid, chitosan, as well as dietary fiber provide you with enoki mushroom benefits like being able to lose body fat within your gut, take control of your blood sugar levels, preventing bowel problems. Listed below are some of the popular health benefits of Enoki mushroom:

Enoki mushrooms provide a smorgasbord of nutrition as well as antioxidants.  They are full of thiamin, niacin, potassium, riboflavin, pantothenic acid, calcium, copper, iron, and selenium, and low in dietary cholesterol and sodium.  Amino acids valine, lysine, and ergothioneine fortify the immune-heightening properties of the enoki.  Appreciated because of its health advantages, the enoki mushroom has been utilized in traditional Chinese and Japanese medication for hundreds of years like a tonic for liver disease, high cholesterol levels, stomach ailments, and high blood pressure level.

2. Helps you lose body fat in your gut

Enoki mushroom consists of linoleic acid which helps to decrease gut fat. It is stated to switch on enzymes liable for burning up visceral fat. Therefore, helping you drop gut fat. So, including enoki mushrooms in your diet will help you decrease body fat.

There are many advantages to getting more fiber in your daily diet like lowering your levels of cholesterol as well as bringing down unwanted weight.

Apart from that another benefit of dietary fiber which is it improves blood sugar control. What better blood glucose control means in weight reduction is that it leads to less sugar being stored away as fat.

Enoki mushrooms are full of dietary fiber that will help you manage blood glucose levels. Spikes within blood sugar result in insulin levels to boost telling the body to store fat. However, fiber might help enhance blood glucose levels simply by reducing the effect of glucose levels on insulin. In other words, what it does is slows down the assimilation of sugar. By reduction of the influence glucose within your blood stream has on insulin, in effect you keep the body from storing fat away. Additionally, it works as a precautionary measure towards type 2 diabetes.

Fiber in enoki mushrooms help to normalize bowel motions and prevents constipation. 12 grams of dietary fiber are found in 300 grams of enokitake mushrooms which is 30 to 50 % of the daily fiber suggested by the Institute of Medicine for males and females of 50 yrs old and younger. However people below 51 need more fiber.

Insufficient fiber in your daily diet may disturb normal bowel motions and may result in constipation. Enokitake mushrooms are one of the best low-calorie sources of dietary fiber to prevent constipation.

Enoki mushroom consists of good amount of amino acid which could encourage and foster mental development as well as enhance memory. Enoki mushroom become essential for the maintenance of health and conditioning the intelligence of kids, for the life extension of the aged, and also to enhance the memory of adults. It really is honored as a “fungus which encourages intellectual development.”

Frequent use of enoki mushroom helps to prevent asthma, rhinitis, eczema as well as other allergic reactions. So include it in your regular diet to remain healthy and allergy free.

Enoki mushroom consumption help to prevent the rise of blood lipids, decrease cholesterol to avoid hyperlipidemia, and lower the occurrence of coronary disease.

Regular use of enoki mushroom encourages the biological activity of the body to improve metabolic process that encourages the absorption of nutrition.

Enoki mushroom, also referred to as Enokitake, is favored within the Asian delicacies, especially in Japan, Korea, and China. It features a mild, fruity taste with a crispy texture, and for that reason, it is mainly utilized in soups, appetizers, as well as salads. There are two types of enoki mushroom: wild and cultivated. They differ in physical characteristics as well as taste.

Wild enoki mushroom grow on the stumps of the Hackberry tree, which is called Enoki in Chinese. These types of mushrooms are golden to dark brown colored and also have thicker stems. Furthermore, they are known as ‘Velvet Foot’ because the lower parts of their stems have got a thick velvety texture.

These types of mushrooms are grown in dark conditions and therefore are milky white colored. They’re developed in special jars that help the development of long slim stems along with round tops at the end. This particular variety is also known as Snow Puffs and Golden Needles due to their color and shape.

When purchasing mushrooms, be sure the flesh is firm to the touch and is also free from rot, pests and damage. Store in fridge for approximately one week, making certain to place in the sealed bag whenever possible.

Best Way to Add to Diet

Enoki mushroom usage just isn’t ideal for those struggling with the weakening of the spleen and stomach because of cold, chronic diarrhea, arthritis, and also lupus erythematosus.