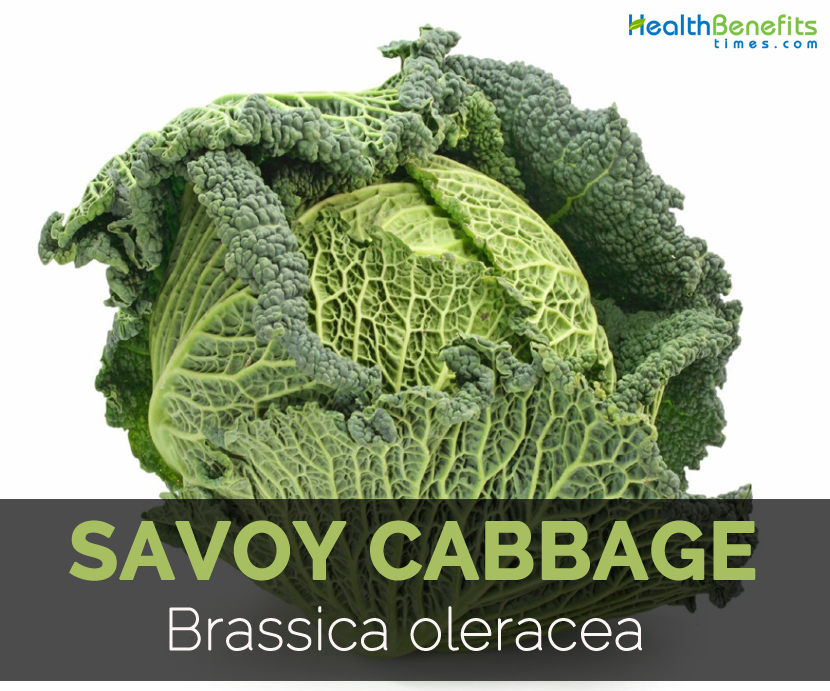 Savoy cabbage (Brassica oleracea var. sabauda L. Capitata Group) is a kind of cabbage which is also known as curly cabbage. Its leaves are bluish to green colored. Savoy cabbage needs well drained soil in a cool climate to grow. It is native to Coastal Southern and Western Europe. It was originated about 1000 BC in Western Asia and Europe. Around 16th century Savoy was sophisticated. It is widely used in Chinese and Polish cuisines. Savoy cabbage is the plant species which also includes the food cultivars such as broccoli, kale, Chinese kale, cauliflower and cabbage. Some common varieties of Savoy cabbage are: Savoy King, Savoy Ace, Quintal D’Alsace and Savoy Queen. The peak season for Savoy cabbage is from April to November.

Savoy cabbage is a cool season biennial vegetable which grows up to 20-60 cm high. The plant grows a compact, round – flattened or pointed head consisting of puckered, overlapped, wavy with curly leaves. The leaves features from blue to green in color. The head of the Savoy cabbage weighs about 3-4 pounds. The plant bears the small, four petaled yellow flowers during the summer season.

Savoy cabbage is free of fats, cholesterol and rich in vitamin A, K, C and B6. It also possess protein, fiber, iron, manganese, folate, thiamin, potassium, calcium and magnesium. It provides low amount of calories.  The phytonutrients found in Savoy cabbage act as an antioxidant which helps to lower the chances of cancers.

The diet low in Vitamin C, A, D and K is associated with the chances of cavities and gum disease. The intake of foods rich in Vitamins assist in the mineralization of teeth and bones. The foods rich in minerals and vitamins helps to eliminate the bacteria present in mouth. Vitamin K works with the other vitamins and minerals which prevent the bacteria that damage the enamel and cause tooth decay.

Vitamin K involves in the metabolism of sphingolipid which is the molecules that occur naturally which are found in the cell membranes of cell. The study shows that Vitamin K possess an anti-inflammatory properties that prevents the oxidative stress caused due to the damage made by free radicals.  Oxidative stress damages the cells and contributes to the health ailments such as Parkinson’s. Alzheimer’s disease and heart ailments.

Vitamin C helps to lower the chances of gout which is a painful condition in which the big toe is afflicted. It becomes inflamed, stiff and painful due to the excess presence of uric acid that leads to the formation of crystals in joints.

The study shows that the intake of 1000 to 1499 mg of Vitamin C regularly helps to reduce the chances of gout by 31% in comparison to those who did not intake.

Vitamin C is an antioxidant which prevents the damage of free radicals, pollutants and toxic chemicals. Free radicals results in the health ailments such as heart disease, cancer and arthritis. The free radicals buildup in the body during the breaking down of food and when exposed to tobacco, smoke or radiation.

Vitamin B helps to reduce the homocysteine levels in blood. Homocysteine helps to increase the chances of strokes and heart attacks.  It helps to maintain the homocysteine levels and has a positive effect in the metabolizing process of minerals as well as antioxidant activities. The studies shows that high intake of folate reduces the chances of cardiovascular diseases in comparison to those who intakes low. The research shows that the supplements of Vitamin B12 can reduce the chances of cardiovascular disease and also protects from stroke.

Folate is the vital vitamin for the healthy pregnancy. The deficiency of folate during pregnancy results in neural tube defects such s anencephaly, spina bifida, heart complication and limb malformations. Folate acts as coenzyme in the single carbon transfers for metabolism of amino acids and synthesis of nucleic acids. Folate is essential for copying DNA and form new cells. Sprouted beans, leafy greens, citrus and avocados are the foods rich in folate.

Both fibers are required for the digestion. Insoluble fiber provides bulk to stool. It also speeds up time to pass out the waste which prevents bloating, indigestion and constipation. Soluble fiber absorbs the water convert into viscous and gelatinous substance and ferments bacteria in digestive tract which also enhances digestion. Fiber requires water for performing effects. So one should drink plenty amount of water for the digestive relief.

The soluble fiber helps to slow down the digestion and maintains the level of blood sugar. It enhances the sensitivity of insulin and controls the spikes of blood sugar and conditions such as diabetes. There is inverse relationship between the glucose levels in dietary fiber and blood. The high intake of fiber prevents the resistance of insulin which is formed from the rising levels of glucose.