Trending
You are at:Home»Dairy»Sour Cream 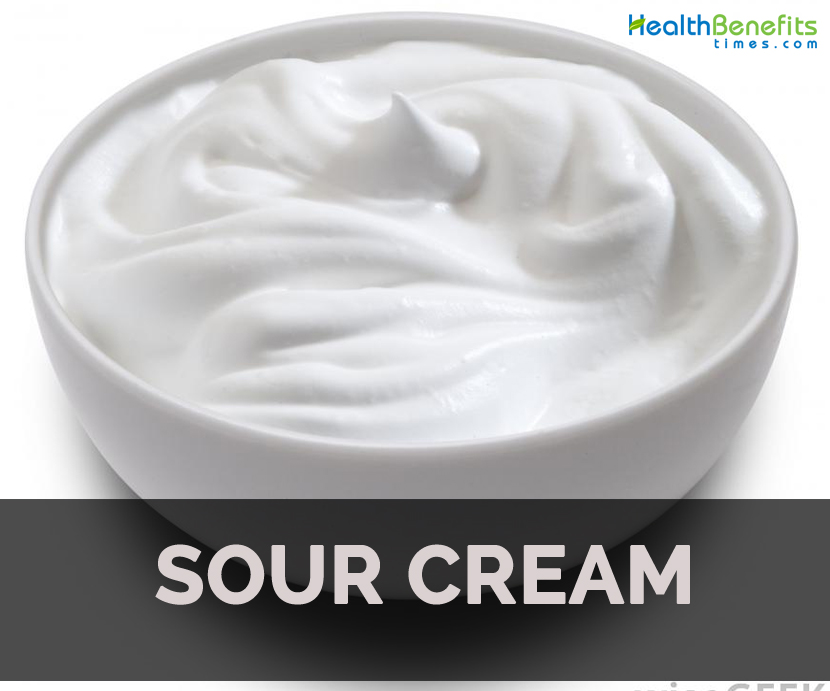 The name is derived from the lactic bacteria which are used for the fermentation for souring. The fermentation process helps to make the cream more acidic and also thickens it. Artificially, rennet, gelatin, carrageenan and guar gum is used to sour the cream. It contains low amount of butterfat from 18 to 20 percent. It is used to dress salads and baking. It is a vital ingredient used for breakfast. Sour cream is used as a condiment in soups. It is called la crema agria in Spanish. Traditional or Regular Sour Cream, Reduced Fat Sour Cream and Non-fat Sour Cream are the three varieties of Sour cream which are available in the food stores.

It has 12 to 16% of butterfat and it is usually made of lactic acid.  Ranin, gelatin and guar gum are the products which are used to make sour cream.

It is lighter sour cream which contains about 40% less fat in comparison to the regular variety. It has milk with cream.

Carrageen and corn starch is used to preserve cream. The fat is absent in this variety.

Sour cream contains adequate amount of nutrients. The high content of fat provides more energy. It has high content of minerals such as phosphorus and calcium. It is added to soups, bakes, pastry, roasts, stews, creams, jellies, sweet and salty pastry fillings.

Phosphorus helps to maintain the health of teeth and bones. It is essential for maintaining strong bones. It promotes the gum health and enamel of tooth. It relieves the conditions such as loss of mineral density and bone loss such as osteoporosis. Phosphorus is associated with heart health and prevents the cardiovascular ailments. (1) (2)

Calcium assists the muscles of heart and contraction of the cardiac muscles. It provides convenient pressure in the arteries. When the calcium drops, calcitrol is released that assist in the contraction of arteries muscles by raising the blood pressure. For contraction, the cardiac muscle requires extracellular calcium ions. The ion collects on the protein troponin with an increase in intracellular concentration of calcium. It promotes the extracellular fluid and intracellular secretion including skeletal muscle which is triggered by the calcium found in sarcoplasmic reticulum. (3)

Vitamin B12 is vital for the treatment of Alzheimer’s disease which could show the symptoms such as cognitive degeneration and confusion. The study shows that the Alzheimer’s patients have low presence of Vitamin B12 in the body.

Vitamin B2 is vital for the growth and development of body tissues and reproductive organs such as eyes, skin, mucous membranes and immune system. It promotes the health of nails, skin and hair.

Vitamin B2 has a vital role in the protection and maintenance of mucous membrane of the digestive system.

Vitamin A helps to promote the vision health. It makes the eyes moist and adjusts the light changes. It forms the visual purple in eyes that promotes the eye health. It prevents the conditions of night blindness and stimulates retina by raising the human eye’s adaptability to darkness and lightness. It is also helpful for the people with glaucoma. (4)

Vitamin A increases the immunity of the body to fight against infections. It moist the mucus membranes to promote the immunity and promotes the white blood cells activity. It prevents the germs and counteracts the infections by providing the double core protection. (5)

Protein assists to maintain the hair health and prevents its damage. The studies show that protein plays a vital role in the growth of healthy hair. Proteins are used in the production of hair care products such as conditioners. (6)

Protein helps to strengthen tissues which are vital for the repairmen of skin from widely occurring wear and tear. Collagen is an essential protein which strengthens the tissues, cells and organs that needs a continuous revitalize. It provides low wrinkled, health and youthful skin that depends on the collagen protein that exist in the body. (7) (8)