Trending
You are at:Home»Nuts and seeds»Health Benefits of Kola Nut 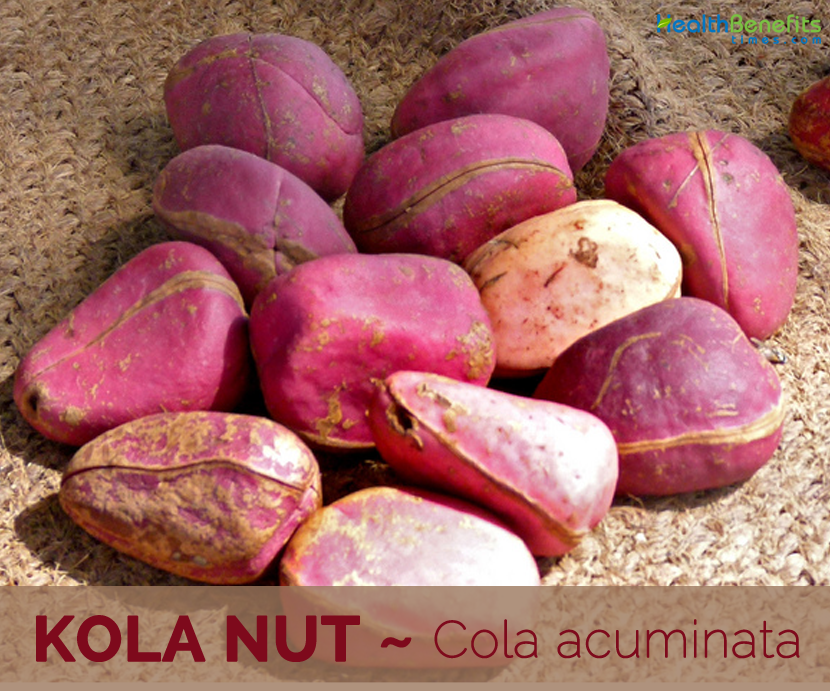 It is a tropical tree which is commonly known for the seeds containing caffeine called Kola nuts. Kola nut also scientifically called Cola nitida, is the plant species that belongs to Malvaceae family. It is also called Kola nut, bitter kola, kola, cola, Gbanja kola and Bissy Nuts. Though being a lowland tree, it is available up to the altitudes of 300 metres (980 ft) in the areas having deep as well as rich soils with evenly distributed rainfall. It is suitable for sandy, loamy or clay soils but does its best in well-drained soil. The tree could reach for about 3 meters for 4 years having the slow initial growth. When the trees reach 12 to 15 years of age, it could produce about 10 to 16 kilos of seeds annually for above 80 years. This plant is also cultivated in India, Brazil, Jamaica and Hawaii.

Kola nut have been used since ancient origins as a tea leaf or coffee berry. West African cultures use it to chew for the restoration of vitality in a social setting or individually.

These nuts have become a crucial part of traditional practice of religion and culture in Nigeria, Niger, Liberia and Sierra Leone. In capital of Niger during 1970, “Goro City” highlights the importance of Kola nuts by Manu Hibango. It was used as a religious object or as an offering during ancestor veneration, prayers, funerals, weddings and naming ceremonies.

In West Africa, the people groups such as Bambara and Malinke of Senegal and Mali use it as a form of currency. It is also being used during present times as a form of respect, negotiation over bride prices.

A pharmacist named John Pemberton of Georgia in 1800s combined the extracts of kola with coca, sugar, carbonated water and other ingredients which resulted in an invention of the first cola soft drink. He named it Coca-Cola. After 1904, cocaine was prohibited in U.S. for making soft drinks and since then Coca-Cola does not use coca or kola in the original recipe but manufactured synthetic chemicals the provides the similar flavor of Kola nut.

This evergreen tree grows up to the height of 12 to 20 meters (39 to 66 ft), has glossy leaves, cream flowers and star shaped fruit. The trunk measures about 1.5 m (4 ft 11.1 in) in diameter. It has a thick as well as fibrous bark which is brownish to grey in color. The alternate leaves are oblong in shape, tough, leathery and has untoothed wavy margins which measures 33 cm (13 in). The male flowers have cup shaped calyx having diameter about 2 cm (0.8 in) and is deeply lobed having two whorl of stamens. The female flowers have five carpels and are about 5 cm (2.0 in) diameters. Each fruit contains 10 seeds. The ripened seeds might be mottled white, reddish to grey or brown that tastes bitter while fresh and becomes aromatic as they ages.

Kola nuts possess two percent of caffeine along with theobromine and kolanin which acts as a stimulant. Theobromine helps to promote the cerebral circulation in the body. It is also present in chocolate that provides a feeling of alertness. This nut promotes the level of oxygen in the blood and also enhances concentration power by clearing the mind. It also assists in countering bacterial infections. Let’s discover some other health benefits that could be obtained with the use of Kola nuts:

The seed of Kola nuts possess antioxidant properties and restrict the activities of α-glucosidase and α-amylase. The antioxidant properties and enzyme prevention are the possible mechanisms for which Kola nuts are used for managing type 2 diabetes in folklore. The contribution of epicatechin, naringenin, apigenin and catechin being phenolic constituents attributes to these characteristics. (1)

Phragmanthera incana found in Kolanut and Cocoa trees helps to prevent the urge of lipid peroxidation in the tissues of tat. Yet, the antioxidant activities being the part of mechanisms of the Phragmanthera incana extracts assist in the protection of organs. The leaves of Kola nut trees also provide antioxidant properties. The use of Phragmanthera incana leaves as nutraceuticals helps to manage the oxidative stress that is related to diabetes and other conditions. It could effectively treat the health ailments such as inflammation, hypertension, diabetes, cancer, insomnia etc. Due to this reason, it is known to be an “all healer plant”. (2)

Caffeine content found in Kola nut helps to increase the heart rate and triggers body. But the people with current heart problems should not use it as it might prove to be harmful to them because it boost metabolism for those having gradual metabolism. If used in moderate amounts, it could stimulate health and upgrades heart health. Enhancement of metabolism in the body assists in positive physiological and enzymatic effects.

Kola nuts promote circulation in the body and optimize heart rate which supports in oxygenation to extremities, skin, brain and organs. The enough presence of oxygen in the brain boost cognition as well as concentration power. In simple words, it clears overall mind which speeds up the healing process of wounds and repair cells.

Kola nuts are used for thousands of years in Africa for treating the upset digestive health. The presence of active ingredients in this nut supports the uptake of nutrient and supports digestion that lowers the chances of bloating, constipation, gastrointestinal issues and cramping.

The bacterial infections that occurs in the human body could be prevents with the use of leaves, stem and roots of Kola tree. The bacterial infections are the cause for various respiratory illnesses such as meningitis, bronchitis and tuberculosis. The extracts of Kola nuts could be found in health stores. It has not been shown that the nut itself is associated with this medicinal benefit.

Caffeine supports in suppressing appetite, so the extracts of Kola nuts helps to burn increasing fat in the body due to its positive effect on metabolism. It is great for those who wants to lose weight by improving the quality of diet.