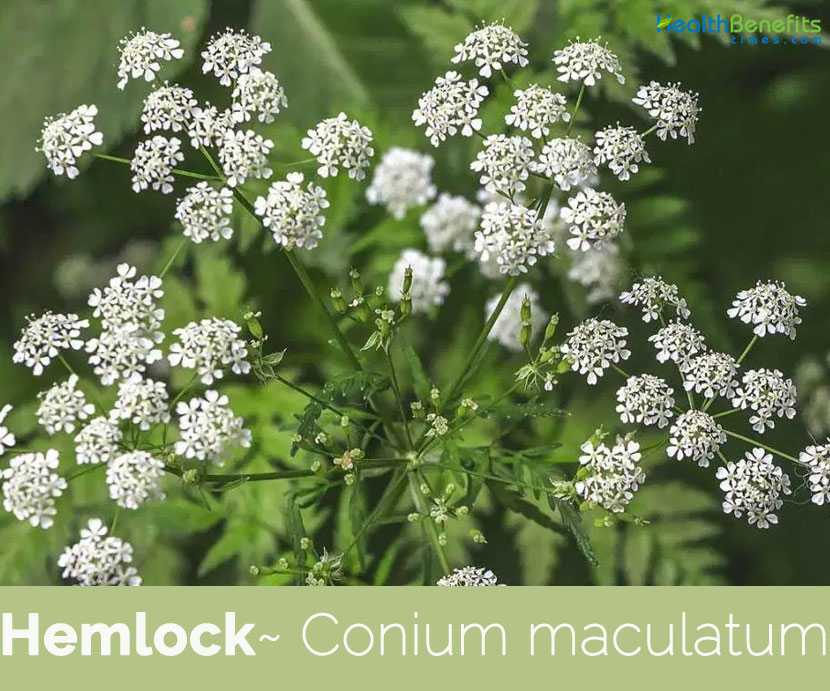 Conium maculatum, the hemlock or poison hemlock, is a highly poisonous plant belonging to the same carrot family (Apiaceae) as carrots, parsnips, fennel, and dill. The plant is native to Europe (i.e. Denmark, Finland, Ireland, Norway, Sweden, UK, Austria, Belgium, Czechoslovakia, Germany, Hungary, the Netherlands, Poland, Switzerland, Belarus, Estonia, Latvia, Lithuania, Moldova, Ukraine, Albania, Bulgaria, Greece, Italy, Romania, Yugoslavia, France, Portugal and Spain), northern Africa (i.e. Algeria, Morocco, Tunisia and Ethiopia), western Asia, China and the Indian Sub-continent (i.e. northern India and northern Pakistan). It is a hardy plant capable of living in a variety of environments; hemlock is widely naturalized in locations outside its native range, such as parts of North and South America, Australia and West Asia, to which it has been introduced.

Conium maculatum is a highly poisonous, upright and short-lived biennial herbaceous flowering plant that normally grows about 1.5–2.5 m (5–8 ft.) tall. It is less readily confused with harmless cow parsley, with very pale, weaker stems and tiny red-and-green leaves next to many of its flower stems which colonizes bright areas. The plant is found growing in grassland, forest margins, riparian habitats, freshwater wetlands, waste ground, disturbed sites, field margins and fallows, riverbeds, palustral, forest margins, stockyards, along roadsides, riverbanks, hedgerows, roadsides, banks of streams and rivers, pastures, and wood lots. The plant is often found in poorly drained soil, mainly near streams, ditches and other watery surfaces. The plant has long taproot that is forked, white or pale yellow and 1-2 cm in diameter.

Stem is flattened during the rosette stage and elongates during the second year to form an upright flower stalk that is 2 to 8 feet tall. It is erect, smooth, slightly ridged, stout below, much branched above and hollow, and is bright green. It is distinctively mottled with small irregular purple spots.

The alternately arranged leaves are borne on long hollow leaf stalks (i.e. petioles) that tend to sheath the stem at their bases. They are deeply divided with toothed (i.e. serrate) segments, and are ferny in appearance. These leaves are up to 50 cm long and 40 cm wide, but more commonly 12-25 cm long and are hairless (i.e. glabrous). Leaves attach to stems by way of leaf stalks (petioles) marked with purplish spots or blotches. Petioles broaden at their base and encircle the stem at each node. Upper leaf surfaces are dark green in color, while their undersides are a paler green or greyish-green. The stems and leaves give off a strong odor when crushed or damaged. 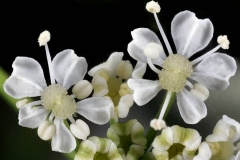 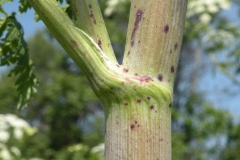 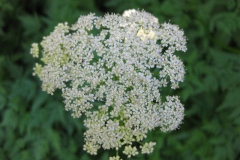 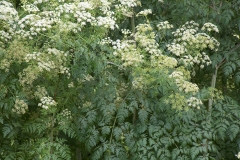 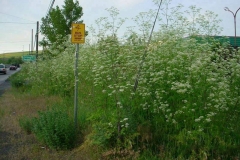 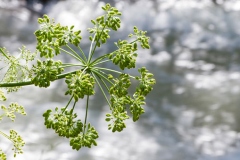 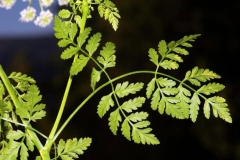 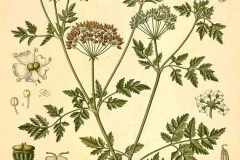 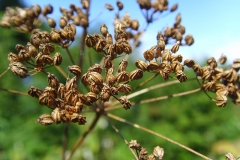 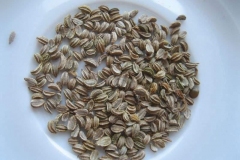 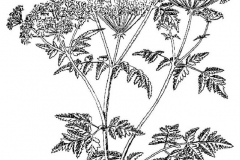 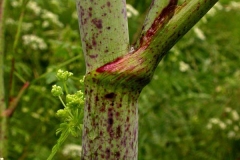 The white flowers are borne in large numbers in dense flat-topped clusters at the tips of the branches (i.e. in terminal compound umbels). Individual flowers are small about 2-4 mm across, have five incurved petals and five stamens, and are borne on stalks (i.e. pedicels) up to 5 cm long. Many of these stalks radiate from the same point and form a small cluster of flowers (i.e. an umbel), with several (6-20) of these smaller clusters (often called rays) being grouped together into a much larger cluster (i.e. a compound umbel) that is subtended by several small leafy bracts (about 5 mm long). The petals of the small ﬂowers are white with an inﬂexed point. The stamens of the ﬂowers are longer than the petals and have white anthers. The inﬂorescence is produced mainly from June to September.

Fruit a woody schizocarp, broadly ovoid, slightly compressed laterally, 2–4 mm long, 2–3 mm wide and 1.5–2 mm thick, with reflexed style remnants at apex of stylopodium and sometimes a pedicel remnant at base. Fruits are initially green turning to greyish-brown in color as it matures. It actually consists of two one-seeded structures (i.e. mericarps) that readily split apart when the fruit is fully mature. Each of these seeds are 2-4 mm long, pale-brown, hairless but has five noticeable yellowish-colored ribs.

Traditional uses and benefits of Hemlock