Trending
You are at:Home»Herbs and Spices»Health benefits of Stone Root 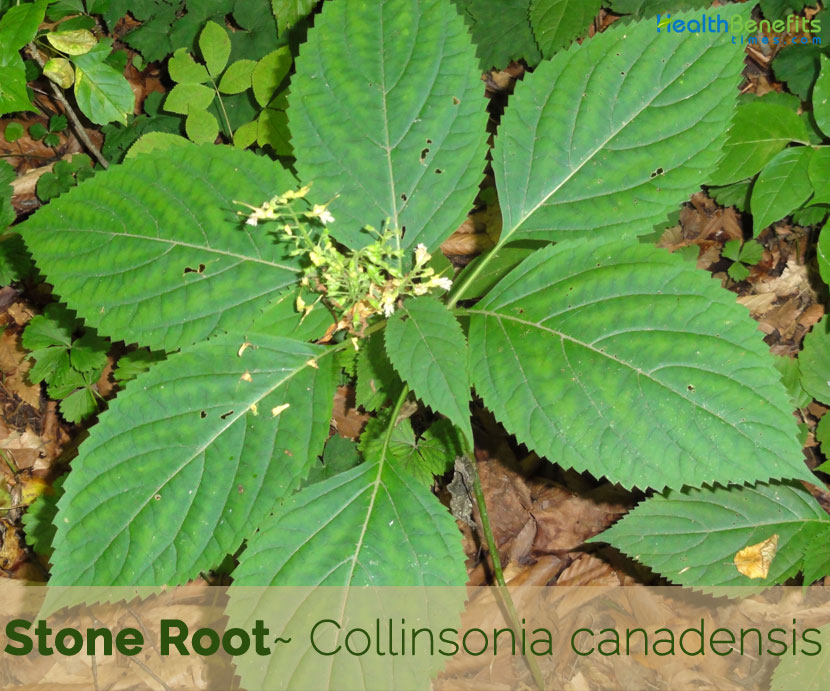 Collinsonia Canadensis, commonly called Stone Root, horsebalm, is a Missouri native plant belonging to Lamiaceae ⁄ Labiatae (Mint family). It is the most broadly distributed member of the genus Collinsonia. The plant is native to eastern North America from Quebec south to Florida and as far west as Missouri, although it is mainly found east of the Mississippi River. Stoneroot, horsebalm, broadleaf collinsonia, hard hack, heal-all, horse weed, knobroot, ox balm, and richweed, Hardback, Hardhack, Knob Grass, Knobweed, Racine de Pierre, Richleaf and Rich Weed are few of the popular common names of the plant. Genus name honors Peter Collinson, 18th-century English Quaker merchant. Canadensis means of Canada. Foliage (when crushed) and flowers of this mint family member have a citronella-like fragrance. Leaves can be used to make teas, and the underground roots (rhizomes) were formerly used medicinally in the treatment of urinary and kidney problems and as astringents.

Stone root is an upright perennial herb that normally grows about 2 to 4 feet tall. The plant is found growing in woodlands, rocky upland woodlands, wooded areas in rocky river valleys, and less often elevated areas in swamps. This plant tends to occur in oak-hickory woodlands and beech-maple woodlands, especially in areas where sandstone bedrock. It is also grown in nutrient-rich mesic forests, most often in rocky, calcareous areas. The plant is easily grown in average, medium, well-drained soil in part shade. Similarly it does well in sandy, clay soils. Rhizomes are brown-grey, about 4 inches long, knobby, and very hard. Square stem is smooth, or slightly pubescent, somewhat branching at the top, and growing from 2 to 4 feet high.

Leaves are 2–6 inches long, 1½–4 inches across, usually ovate in shape, and coarsely serrate-crenate along their margins. The leaf tips are usually acute, while the leaf bases are wedge-shaped (cuneate) to rounded. Upper leaf surface is medium to dark green and hairless to sparsely short-pubescent, while the lower leaf surface is light grayish green, hairless to sparsely pubescent, and glandular-punctate (appearing like glistening dots in bright light). The narrow petioles are ½–2 inches long, light green, and hairless to moderately short-pubescent; sometimes the uppermost leaves are sessile or nearly so.

Central stem terminates in either a spike-like raceme or pyramidal panicle of flowers (depending on the robustness of individual plants). Individual panicles are up to 8 inches long and 6 inches across, consisting of a central stalk and several lateral branches that become progressively shorter upward. These lateral branches are spreading to ascending. Both the central stalk and lateral branches of the inflorescence are light green and bluntly 4-angled with shallow channels along their sides. They are hairless to moderately short-pubescent. The inflorescence also has small green bracts that are less than 1/8″ (3 mm.) long; they are narrow in shape and early-deciduous.

Individual flowers are about 1/3–1/2 inches (8–13 mm.) long, consisting of a short-tubular to bell-shaped green calyx with 5 teeth, a two-lipped tubular corolla that is predominately cream-colored or yellow, 2 long-exserted fertile stamens, and an ovary with a slender style that is also long-exserted. The calyx is minutely pubescent and glandular-punctate, it has 2 linear-lanceolate lower teeth and 3 linear-deltate upper teeth; the lower teeth are longer than the upper teeth. The calyx also has 10 narrow longitudinal ridges that are dark green. Corolla has a narrow tubular base, but it becomes wider and more trumpet-shaped towards its mouth with 5 spreading lobes (2 upper lobes, 2 lateral lobes, and 1 lower lobe that is larger in size). The upper and lateral lobes are either oval or oval-deltate in shape, while the lower lobe is violin-shaped, mostly white, and heavily fringed along its outer lip. Sometimes there are reddish stripes or bars along the upper and middle lobes of the corolla, while either patches or stripes of faded red may occur toward the base of the lower lobe. The throat of the corolla is a little wider than tall, where there is a patch of fine white hairs. The filaments of the stamens are white, light yellow or light greenish yellow, while the fertile anthers are either white or light yellow. The slender style is dark red and usually bent toward one of the stamens.

Afterwards, the flowers are replaced by small nutlets (0-2 nutlets per flower); they develop within enlarged calyces. Individual nutlets are about 1.5 mm. across, globoid but somewhat flattened in shape, and dark brown. Each nutlet consists of about four seeds. 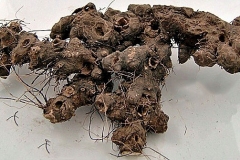 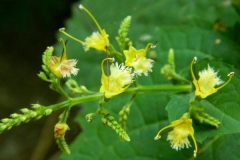 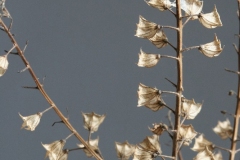 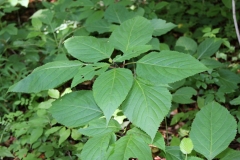 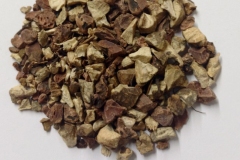 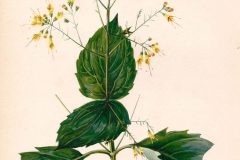 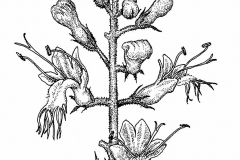 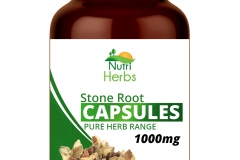 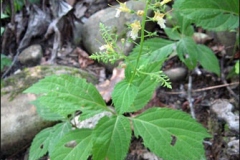 Collinsonia canadensis, also known as stone root is an herb in the mint family. Traditionally, it has been used for improving circulation and congestion, particularly in the bowels and throat. It has also generated much interest for being helpful in keeping mucous membranes healthy and improving digestion. In the past, it was an extremely valuable ingredient in many types of throat remedies. In particular though, due to its usefulness in promoting circulation, it is believed to be valuable in relieving hemorrhoid symptoms. Listed below are some of the popular health benefits of stone root

Collinsonia root is supposed to help with a number of circulatory conditions, including easing hemorrhoid pain. It is considered to help with rectal irritation by fighting the swelling of rectal veins. It’s also known to assist in blood flow by alleviating blood vessel contraction, strengthening vein walls, and assisting with the reduction of blood pooling. Many people, who have circulatory concerns that cause them to feel cold all the time, even when the weather is warm, use this herb to gain relief from chills.

Collinsonia possesses strong antioxidant properties, containing the beneficial elements of saponins, organic acid, mucilage, tannins, and resins. These substances help support blood vessel tone, organ tissues, and fluid levels. By assisting the body in overcoming circulatory conditions and stress, Collinsonia supports lung and heart health. It has a natural ability to assist in the removal of excess fluids. Because of this, some people also use it to maintain urinary health.

Collinsonia root is quite beneficial for throat and the larynx. Since the late 19th Century, many natural health practitioners have trusted upon Canadensis for a condition that was once known as “minister’s sore throat.” This condition was observed to result in those who, like ministers often did in the late 19th century, spoke for prolonged periods in a strained, ecstatic, or exaggerated tone of voice that resulted in congestion of the vocal cords. This condition would then produce a sense of restriction, coughing, and even the inability to speak. People with this condition reported instant relief after taking Collinsonia Root.

In the 21st century, collinsonia root is most commonly used in natural health care for the treatment of hemorrhoids (a condition of vascular irritation of the rectal area with a general sense of “constriction” or pain in the lower abdomen). Collinsonia root is used in particular for symptomatic hemorrhoids, the most common complaint in anus and rectal health issues. Symptoms can include rectal bleeding, tissue protrusion, and mucous discharge.

Nowadays Collinsonia root is used to relieve the heartburn and painful digestion associated with circulatory stress. In fact, it appears to help with several conditions that often impact the entire digestive process. Reports have circulated that it helps relieve symptoms of diarrhea, constipation, and flatulence. Athletes have used this herb to help them regain energy after intense performances that led to overexertion.

Number of mental issues appears to be relieved by the use of this herb. Overall feelings of happiness and decreased nervousness have been reported by a number of users. Other reports also mention increased female libido, better energy, and better skin.

It is collinsonia root’s earlier-referenced diuretic characteristics that stimulate urine production and the regularity of urination. It is also beneficial in easing painful inflammation of the bladder as well as kidney stones, while also proving helpful in eliminating accumulated toxic uric acid and relieving water retention.

8. Other Benefits of Collinsonia Root

The benefits of Collinsonia root are available from both internal and topical applications. As a poultice, it has been used for bruises, joint aches, and sprains. The flowers and leaves of the plant have also been used to relieve headaches and body odor. When taken internally, it helps with headaches, cramps, and indigestion. Others have used it for kidney and urinary benefits. Other applications include easing the symptoms of sore throats, helping to clear chest congestion, assisting with digestive difficulties, and eliminating constipation.