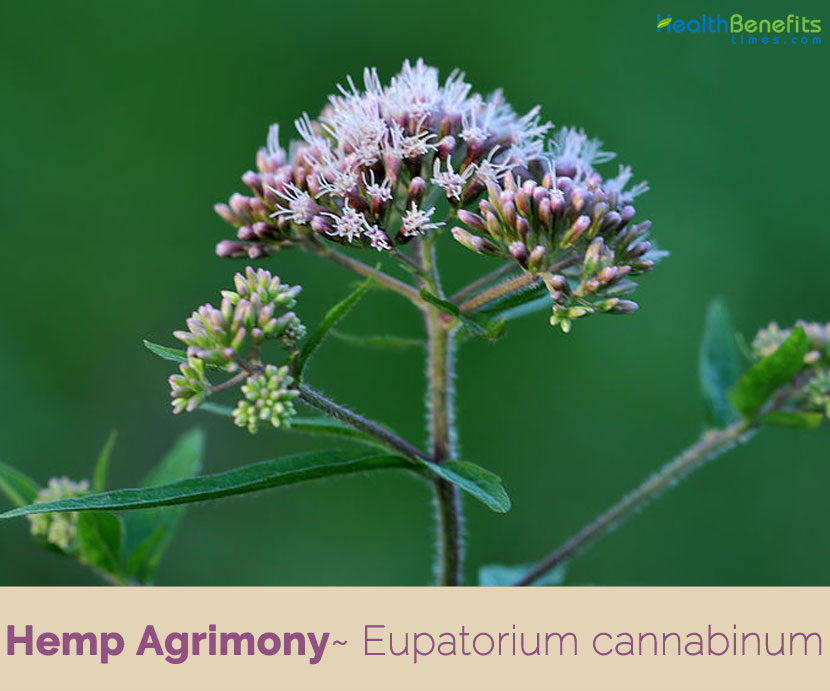 Boneset, common Dutch agrimony, common hemp agrimony, eupatorio, gravel root, hemp agrimony, hindheal, holy rope, khad al bint, Koninginnenkruid, koyunpitragi, linwe di tchet, St John’s herb, water agrimony, water maudlin, sweet-smelling trefoil and holy rope are few of the popular common names of the plant. In some parts of Britain this plant is well known by the common name Raspberries and Cream. Hemp agrimony despite its name is not related to either agrimony or cannabis, or the Hemp tree but is well-known by being the only member of the Eupatorium genus which is native to Europe. The genus Eupatorium was named after Mithridates Eupator (134-63 BC), king of Pontus, who is reputed to have used a species from this group as an antidote to a poison in common use at that time. The specific epithet cannabinum means hemp-like and is a reference to the leaves which are similar to those of the (unrelated) Hemp or Cannabis plants – for example Cannabis sativa – which have been used for making rope etc. (and psychoactive substances!). The common name Hemp Agrimony reflects this feature too.

Hemp Agrimony is an erect, robust, very handsome, herbaceous, tall growing, perennial plant that normally grows up to 1.5 meters (4.9 feet) tall or more and 1.2 meters (3.9 feet) wide. The plant is found growing by streams, low damp sites , in woods, rivers, sides of ditches, at the base of cliffs on the seashore, estuarine habitats, lakes, riparian zones, water courses, wetlands, moist woodlands, fens, marshes, along rivers and canals, watery places, damp grasslands, coastal dunes, pastures and permanently cultivated land.  The plant prefers moist but well drained loam soil in a sunny location with a little shade throughout the day. Stems are reddish- brown in color, covered with downy hair and are woody below. They have a pleasant aromatic smell when cut.

It has long been used for medicinal purposes being referred to by Greeks and Romans as well by the medieval Persian physician Aviccena, for what is also known as Eupatorium of Aviccena, and later by the Portuguese Renaissance pioneer in tropical medicine, Garcia da Orta (1563). Presently, hemp-agrimony is used in both Chinese and Indian traditional medicine as well as in natural medicine in western countries with very diverse therapeutic indications including influenza-like illnesses, hypertension and as an anti-tumor agent.

Branch leaves are simple ovate or lanceolate and all leaves are opposite. The leaves are divided at the base into three, or more rarely five, lance-shaped toothed lobes with the middle lobe being much larger than the others. This gives the leaf the general form of Hemp, hence the name derived from cannabis. Leaves have short hairs and many glands and there are many reported medicinal uses

Hemp agrimony produces pinkish-red flowers arranged in flat flower heads on top of the purple flowering stem. Some flower heads are made of pink and white flowers, which is why hemp agrimony is also known as “raspberry and cream” in some areas. Flowers consist of both types of reproductive organs (perfect flowers). Hemp agrimony blooms from July to September. Fragrant flowers attract butterflies and moths and are main pollinators of this plant.

Fertile flowers are followed by brown cypsela (type of dry fruit), about 2 or 3 mm long, equipped with pappus, hairy structure about 3 to 5 mm long, which helps dispersal by wind. 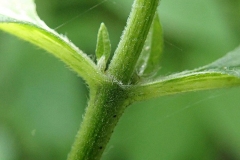 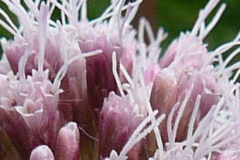 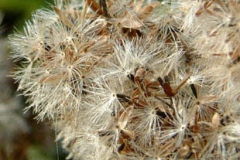 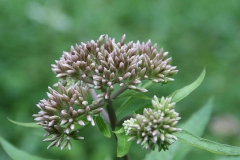 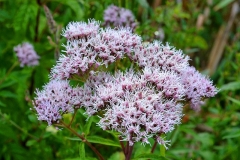 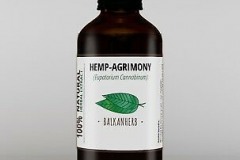 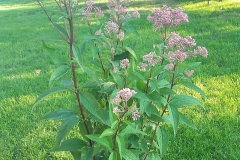 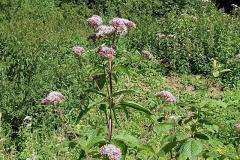 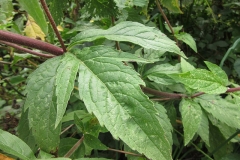 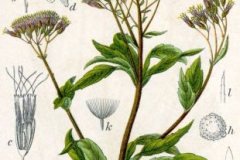 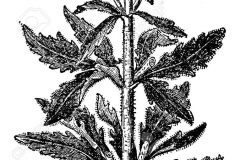 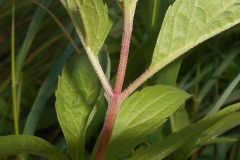 Hemp Agrimony plant can be used as a diuretic, helping the kidneys work properly and encouraging the excretion of toxins through the kidneys.

Hemp agrimony may be used internally as an herbal tea to increase appetite, for indigestion, for increasing the bile flow and helping the liver to function properly as well as helping with gallbladder inflammation, and gallstones. The root of the plant can act as both laxative and diuretic. Ingested in large doses the herb can be strongly laxative but in small doses, it can, in combination with other herbs, be used for constipation.

Hemp agrimony is also used to treat rheumatic disorders such as rheumatism and arthritis, due to its anti-inflammatory effects and diuretic effects, helping the body get rid of the toxins that cause rheumatic pain trough urine.

External uses of hemp agrimony, in the form of tincture, include treatments of minor skin infections, bleeding, bruising and wounds.

Leaves have been added to bread to prevent mold growth and vegetable juice made from the leaves has been rubbed into the fur of animals as an insect repelling agent.

H Herbs and Spices
Share. Twitter Facebook Google+ Pinterest LinkedIn Tumblr Email
Previous Article7 Common Women Health Issues Which You Should Be Aware Of
Next Article You Are What You Eat: 4 Healthy Benefits of Home Baked Bread