Trending
You are at:Home»Herbs and Spices»Health benefits of Herb Robert – Geranium robertianum 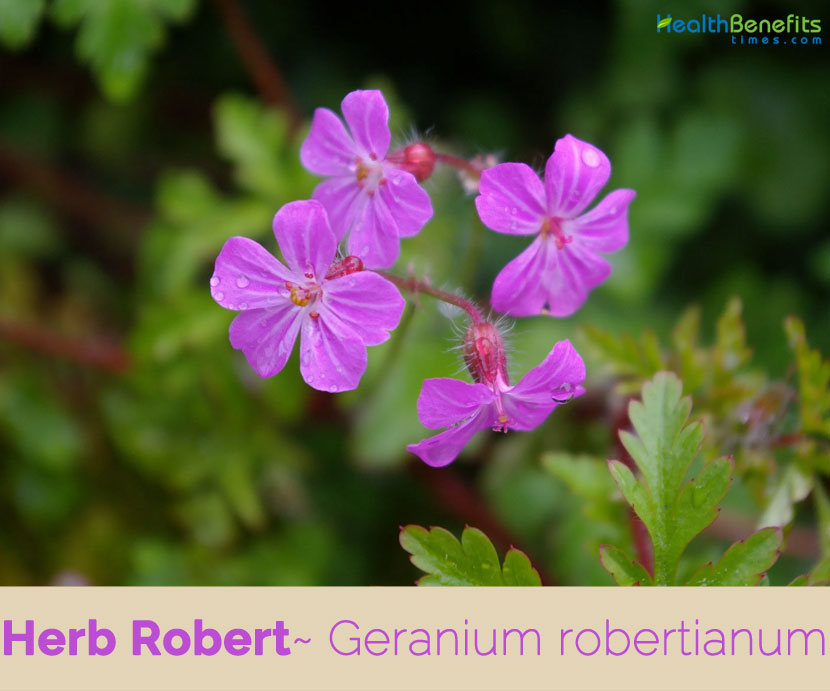 Geranium, the genus name, comes from the Greek noun geranos, meaning Crane (birds of the group of species known as the Gruidae). It is a reference to the beak-like fruit (seed capsule) which is suggestive of the long beak of a Crane. As for the specific epithet robertianum, which apparently honors someone with the name (probably the surname) Robert, we have not been able to pinpoint for certain the individual after whom Herb Robert is named. It is reputed to be Saint Robert, a French monk who in about 1000 AD was using this plant to treat and cure people with various diseases. Another possibility is that it is simply a corruption of ruber, which means red.

Herb Robert is a widespread sprawling, erect, annual to short-lived, perennial herb normally growing about 10 to 60 cm tall. The plant is found growing in moist shady positions in undergrowth, rocks and walls, hedge banks, roadsides, waste places, coastal beaches (sea beaches), forests, ridges or ledges, talus and rocky slopes, forest under story, forest edges, riparian zones, and other lowland areas with natural or man-made disturbances. The plant has a preference for light or sandy, loam or medium and clay or heavy soils and needs a soil that has a proper drainage. In addition, plants of this species can thrive in all types of soil, including neutral, acidic and alkaline or basic. Stems are branched in many directions from the base and are decumbent, and have long, spreading hairs on the lower portions.

The long petiolate leaves are pinnately-lobed to dissected, with the lowest measuring from 5-15 cm long. The blades are 3-5 cm wide with the 3-5 lobed to dissected leaflets having short stalks or sessile. Basal leaves are few and reduced. Stem leaves are opposite, 15 to 90 mm long, petiolated, and sparsely hairy on both sides. Central leaflets and flowers are stalked. Leaf-stalks are 1.8-4.4 cm long, hairy. Stipules are 2-3 mm long, broadly ovate and sub-acuminate. If Herb Robert leaves are picked frequently, this plant will produce an abundance of leaves so long as the growing conditions permit it.

Flowers are actinomorphic (meaning it has a radial or star-shaped flower). It measures 1.5 to 2 cm (0.6–0.8 inches) across. It has five petals about 8-13 mm long with rounded tips and is usually a dark rose-red, with paler veins, and round-tipped. (Sometimes the flower is pale pink.) It has five sepals 6-9 mm long and covered with soft hairs with bristles at their tips with broadly membranous margins, is glossy, long-haired, and erect. Flower has ten stamens and the pistil has five carpels. The style column measures 15-20 mm long with the beak measuring 6-7 mm. Flowers usually grow axillary in pairs or terminating stems. The plant blooms anywhere from late spring into early autumn depending on location. In species such as Geum urbanum or Geranium robertianum flowering may be repeated 2-3 times within one vegetation season.

Herb-Robert is a well-known for its strong disagreeable mousy smell and its cheerful bright pink flowers. This odor is referred to by the common names stinking Robert and stinky Bob. In folklore it is the plant belonging to the mischievous house goblin Robin Goodfellow (the name Robin is a diminutive of Robert). 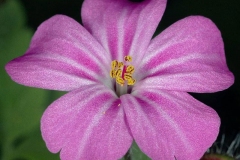 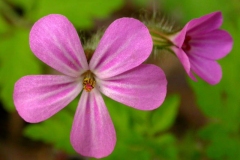 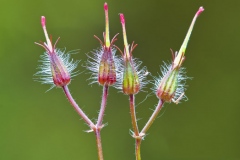 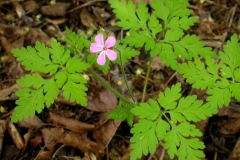 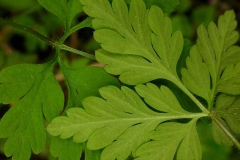 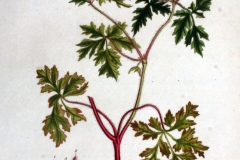 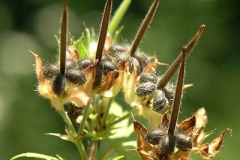 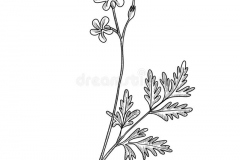 The effect of herb robert on the nervous system is well-known and the plant has been long used to deal with stress and anxiety. It certainly controls the endocrine system and helps balance hormones that flare up when we are under stress. A cup of tasty tea or a dose of the tincture can be a quick medication to unpleasant mood and overwhelmed mind.

If you’re suffering from cramping, bloating, diarrhea, or a generally upset stomach, adding herb robert to your day can be one of the easiest methods to ease your digestive problems. The beneficial organic compounds can rapidly calm inflammation and remove bacteria that may be causing the discomfort, and get your gastrointestinal system back to normal.

Though quite similar to its anti-inflammatory properties, the analgesic ability of herb robert has made it a popular traditional cure for headaches and other painful injuries. It releases endorphins (the “happy” hormones that relieve pain) and can help with headaches, migraines and chronic pain. It has a rapid soothing reaction, but it’s mostly used for medium amounts of pain.

Herb Robert relieves symptoms of bronchitis, sinusitis, and nose infections because of its powerful antiviral effects.

Because of its diuretic properties, herb robert can improve the health of kidneys and stimulate urination. This removes toxins, excess salts, fats, and water from the body, and helps reduce the strain on your kidneys as well as relieving arthritis and joint pains, since the uric acid (which causes the pain in these conditions) is also flushed out of the body with increased urination.

It helps strengthen the body’s defense system against diseases and infections. Its antimicrobial properties can help prevent internal and external pathogens from negatively impacting the body. Herb robert has amazing effects on the immune system: as an energy giver, immune builder, and as a powerful therapeutic and preventative, as a vigorous adaptogen, acting to alleviate minor or major health imbalances.

Herb Robert tincture is outstanding for treating a range of women’s health issues from hot flashes and distress during menopause and menstrual cramps. It works two-fold, as a uterine tonic and an antidepressant. It has been traditionally used to stabilize hormonal levels during menopause through its action on the adrenal cortex.

Herb Robert has natural antiseptic, antibacterial, and anti-fungal properties that make it a wonderful cold and flu reliever if you feel yourself getting sick. Introducing herb robert to your body will boost the strength of your immune system and promote a quick recovery from a variety of illnesses.

Herb robert has a mind-blowing medicinal property not often seen in the herbal world. It is a source of germanium, a valuable element to the body, as it has the ability to make oxygen available to the cells. More oxygen, at cell level, means the body has the opportunity to fight disease by its own powers, and healing can take place quickly. Lack of oxygen, available to the cells, can be caused by free radicals and a toxic state around the cells: meaning the cells cannot get the required oxygen, or the nutrients, to regenerate. The area becomes anaerobic, the main reason we develop pain, disease, wayward cells and cancer.

Herb Robert, being a styptic, has the capability to stop the occurrence of hemorrhage as it slows down blood flow by contracting the arteries and veins. It also has hemostatic properties, which cause the blood to clot. This helps heal wounds faster.

Foot infusion is said to remove toxins, heavy metals and prevent radiation damage, so would be of benefit to those using mobile phones, computers, microwaves or having x-rays, which pretty much means all of us! To make a foot infusion put a handful of chopped herb Robert in a bowl and pour a liter of boiling water over it stirring well. Add enough cold water to make it comfortable and soak your feet for 15 wonderful minutes.

One of the common uses of herb robert is to relieve inflammation throughout the body. If you suffer from sore joints, aching muscles, or even internal inflammation of the digestive or cardiovascular system, herb robert can provide relief from the discomfort while reducing the strain on your body’s sensitive areas.

Apply according to label directions. Glyphosate products should be applied as spot treatments only! NOTE: Some ingredients listed here are only available in combination. Read the label carefully on combination products to make sure the product is suitable for your specific situation.