Trending
You are at:Home»Herbs and Spices»Health benefits of Honduran mahogany 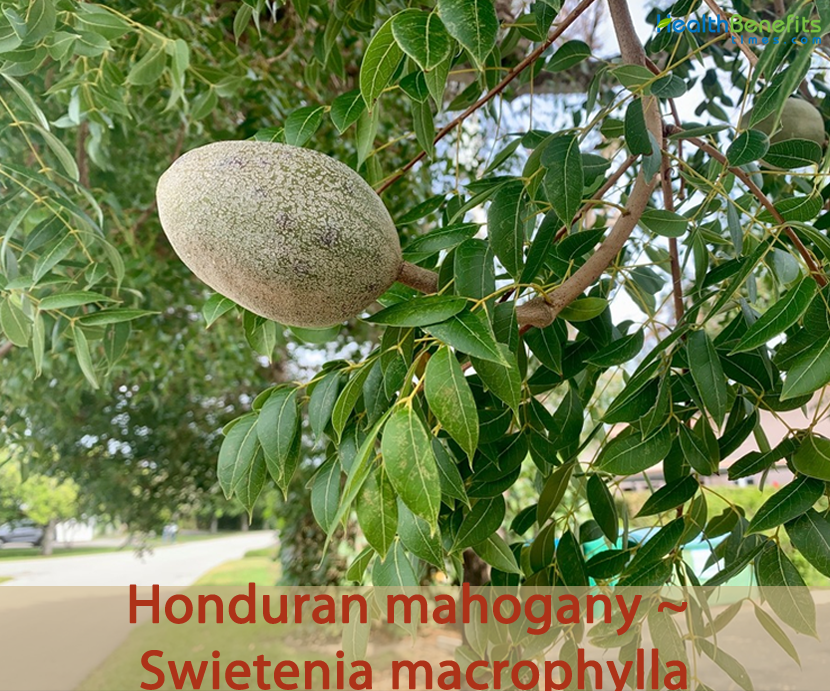 Swietenia macrophylla, commonly known as mahogany, Honduran mahogany or big-leaf mahogany is a species of plant in the Meliaceae (Mahogany family). The plant is native to Belize, Bolivia, Brazil, Colombia, Costa Rica, Ecuador, El Salvador, Guatemala, Honduras, Mexico, Nicaragua, Panama, Peru and Venezuela. However, it is nearly extinct in Ecuador, Colombia, Panama and Costa Rica; close to commercial extinction in Bolivia; declining in Mexico, Belize and Brazil; and in severe decline in Guatemala, Peru, Nicaragua and Honduras. The species has been extensively planted mainly in Southern Asia and the Pacific including India, Indonesia, Philippines and Sri Lanka. It has also been introduced into West Africa. Some of the popular common names of the plants are American mahogani, Baywood, Bigleaf mahogany, Broadleaf mahagony, Honduras mahogany, Mahogany, Large-leaved mahogany, Honduran mahogany, Brazilian Mahogany, West Indian mahogany, Large-leaved Mahogany and New World Mahogany.

The genus epithet Swietenia is derived from the botanist and physician to Maria Theresa of Austria, Gerard von Swieten. The specific epithet macrophylla refers to large leaves, which is derived from the Greek makros meaning large and phyllon meaning leaf. Various medicinal uses of this plant have been reported. Bark is used to treat diarrhea and fever. The tree is not cultivated for food for no plant part is edible. Else, it is used in reforestation projects or as a shade tree in plantation crops. Crushed fruit shells are used as a potting medium. Bark produces gums, and used for dyeing and tanning leather. Seed kernels yield oil which is very bitter and purgative. Wood is valued for high quality woodwork and furniture, musical instruments, veneer, etc.

Honduran mahogany is a beautiful, fast growing, evergreen or briefly deciduous, shade tolerant tropical tree with an open, rounded crown.  The plant normally grows about 30 – 40 meters tall but specimens up to 60 meters tall can be found in favorable conditions. The bole is straight and cylindrical with a buttressed base – it usually has a diameter of 100 – 120 cm, but in exceptional conditions up to 280 cm has been recorded. It usually has buttress roots up to 5 meters above the base, which increases the diameter of the trunk to more than 10 meters, making it necessary to cut the tree at more than 2 meters above the ground. Bark is reticulate, grey and smooth when young, turning dark brown, ridged and flaky when old. The outer bark of older trees is scaly, shaggy, deeply longitudinally furrowed and brownish-grey to reddish-brown, and the inner bark is red-brown or pinkish-red. Young branches are glabrous, with fine patterns.

It is a very well-known and valuable timber; mahogany is regarded as the world’s finest timber for high-class furniture and cabinet work. The tree has been heavily exploited within its native range, becoming virtually extinct in some areas, with populations everywhere in steep decline. It is now cultivated in plantations in many parts of the tropics. It is planted as an ornamental lawn tree in peninsular Malaysia. The plant is found growing in semi evergreen and evergreen rain forests, forest edges, dry forests, disturbed sites, secondary forests, riparian forest, mixed hardwood forest belts and along riverbanks. It tolerates soils ranging from deep, poorly drained, acid clays of the wooded swamps, to well drained alkaline soils of the limestone uplands. Maximum development is attained on deep, fertile, moist, well-drained and neutral to mildly alkaline soils.

The leaves are usually paripinnate, sometimes imparipinnate, 12-45 cm long and made up of 3-6 pairs of ovate or ovate-lance shaped leaflets. The leaflets are asymmetric, 5-12 cm long, and 2-5 cm wide, with pointed or long pointed tip. The leaflets are even in number and are connected by a central midrib. Young leaves are pink or red, and gradually change to dark green when mature.

The tree produces small, fragrant, white unisexual flowers 0.5–1.0 cm in length, which are held in inflorescences called panicles including both male and female.

Fertile flowers are followed by 5-lobed capsule, oblong or ovoid fruit, 11.6–38.7 cm in length, 6.7–12.0 cm in diameter and light grey to brown with 4–5 valves. Outer valves are woody; 5-7 mm thick while inner valves are much thinner. In the center is a woody, 5 angled columella extending to the apex. The fruits split open from apex or base when they are ripe and dry. Each fruit consists of 22–71 developed seeds.

Seeds are brown, oblong, compressed, crested, samaroid, bulky at their base, 7–12 cm long and 2–2.5 cm wide including the wing.

Mahogany wood is strong and is used for construction materials, plywood, high-grade furniture and cabinet making. It is also suitable for paneling, framing, flooring, automobile bodies, interior trim of boats, radio and phonograph cabinets, bodies of musical instruments, moldings and other ornaments. 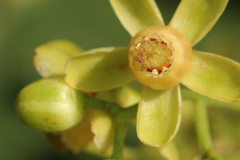 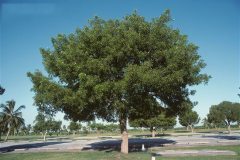 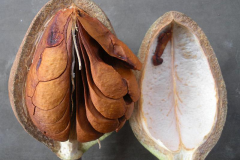 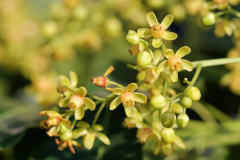 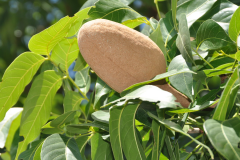 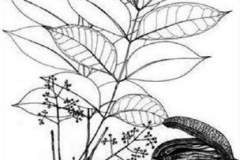 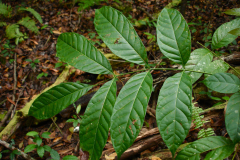 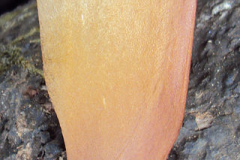 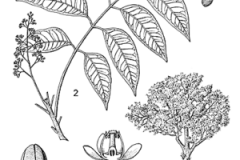 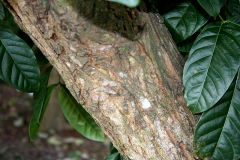 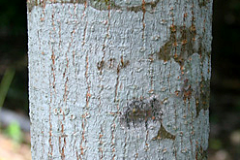 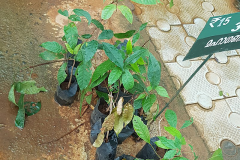 Drinking the extract from mahogany bark is effective in controlling blood sugar levels. This is due to the presence of saponin, which is a natural anti-diabetic remedy. Research reported that mahogany bark extract showed significant hypoglycemic activity might be used in the future for the development of phyto-medicines for diabetes mellitus.

Parts of the mahogany tree, including the bark, have been used as local treatment of fertility in men and women. In men, it has been said to cure impotence or erectile dysfunction as it improves erection. In women, it increases the chances of getting pregnant. However, there is still very little scientific evidence to support this claim.

Mahogany bark also has a positive effect on the heart. Flavonoid content in the bark decreases the risk of heart diseases and also reduces the buildup of bad cholesterol and fats in the blood. Flavonoids also improve blood circulation and usually improve the cardiovascular system.

Mahogany seed is able to treat hypertension. Simply collect 8 grams of mahogany seeds, then brewed with 2 glasses of hot water. After cool then filter and divide into two parts / glass. Drink in the morning and afternoon. It is helpful in treating hypertension.

Flavonoids are regarded as antioxidants, which help to fight free radicals in the body. Free radicals can cause harm by contaminating cells. This causes cancer in some cases. Antioxidants also boost the immune system and make it easy for the body to fight infections and diseases.

Mahogany bark has also been used as a local cure for fever and malaria. Just boil the bark in water and drink it while still hot or warm. One research stated that mahogany had potential antimalarial properties.

Drinking mahogany bark extract might help to increase appetite. This can be great for those who are recovering from fever or malaria. So, using mahogany bark would not only fight off the illness but would also bring back one’s appetite.

Mahogany bark has wound-healing abilities. A 2020 research published in the Journal of Medicinal Plants Research showed to this. Research also stated that the bark had antibacterial properties.

Mahogany seed also acts as an insect repellent. When the mahogany seed is made into a powder, it can serve as an insect spray. For those who live in the tropics or where there are enough insects can use mahogany powder as an additional intake to help strengthen the body against diseases caused by insects or transmitted by insects.

Mahogany seeds can also be used to cure constipation. Consumption of this fruit (mashed) then mixed with warm water to relieve constipation.

To overcome the pain during menstruation use herbal medicine from the seeds of mahogany. Consuming mahogany seeds early in the menstrual cycle will reduce the pain.

Consuming 1 mahogany per day will increase fertility. Especially if you are a woman who has not had children and want to feel the pregnancy.

Take 1/2 teaspoon of mahogany powder and put in 1/2 cup hot water, add one tablespoon of honey. Drink while still warm. Do it three times a day.