Trending
You are at:Home»Facts»How Polyclonal Antibodies Improve Immunoassay Results by Binding to Epitopes 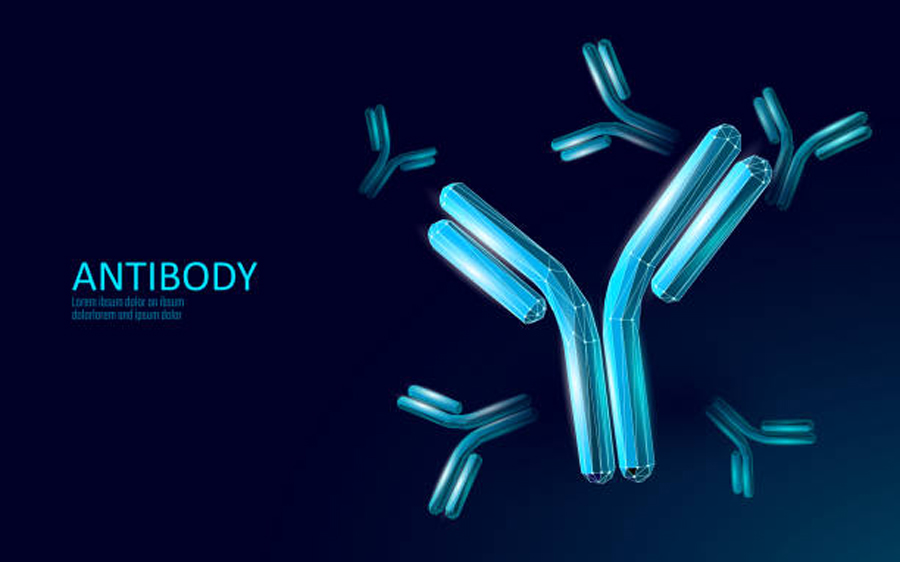 Y-shaped antibodies consist of two sets of polypeptide chains, two heavy and two light. Each tip features a paratope—an antigen binding site—specific for one unique epitope on an antigen. The paratope recognizes and binds to the epitope of the target antigen with a high degree of precision. As a result, scientists can mass produce antibodies for general research or medical applications and validate the accuracy and reproducibility of immunoassay results. Antibodies are classified as either monoclonal or polyclonal based on their binding affinity (the strength of the bond between the antigen and antibody) and their selectivity for certain epitopes.

Monoclonal antibodies are homogenous antibodies created by cloning the B cells from a parent cell. This produces an antibody that will only recognize and bind to one epitope on an antigen. Monoclonal antibodies show a high level of consistency among experiments, have a low risk for background noise and cross-reactivity, and can produce large quantities of antibodies. However, they have a lower affinity than polyclonal antibodies. Development and production require specialized equipment and complex technical skills, and this process can be expensive and time-consuming. Thus, monoclonal antibodies are often used for developing pharmaceuticals and serving as vectors for delivering targeted drugs to specific cells, such as cancerous tumors.

Polyclonal antibodies comprise a mixture of heterogeneous antibodies created by different B cell clones, and they can recognize and bind to multiple epitopes on an antigen. This high binding affinity allows them to detect and successfully bind with specific antigens and amplify signals from target analytes with low expression levels. They are also more stable against environmental changes that could cause inactivation or other issues. Production of polyclonal antibodies is often quicker and cheaper than monoclonal antibody production, but they are susceptible to variability among batches and can cause cross-reactivity. However, this interference can be eliminated by carefully selecting the right antibodies and performing high-affinity purification.

Primary and Secondary Antibodies in Immunoassays

Researchers use immunoassays to identify the presence of analytes in a sample and measure their concentration by prompting antibodies to recognize and bind to the epitope of the target antigen. Immunoassays can be used to track proteins, antigens, and antibodies in animal systems. Researchers can then study biological processes, perform quality control on products, detect contaminants in water and food, and assess the progression of diseases. There are several different immunoassay formats, and an antibody that works for one format may not work for another. Selecting the right one for an application depends on the analyte of interest and the goals of the experiment.

All immunoassay formats rely on the binding affinity of antibodies to bind to certain structures in a molecule. Monoclonal antibodies are typically used as the primary (capture) antibodies in an immunoassay because their high level of specificity and predictable behavior after characterization allows for fine detection and quantification of antigens. Polyclonal antibodies are ideal secondary (detection) antibodies or reagents because they can recognize multiple different epitopes of a target molecule. They can then bind to these epitopes and amplify the signal, allowing for easier detection. They are particularly useful for discovering and detecting unknown antigens and can be used in a wide variety of general research applications.

In a sandwich ELISA, researchers immobilize a monoclonal (capture) antibody onto a microplate. Then, they add the test sample to the plate so the antibody can bind to the target antigen in the sample and retain it in the wells of the plate. Next, they add a polyclonal (detection) antibody with a specific affinity for the target antigen that will also bind to the antigen. This creates a “sandwich” in which the antigen is bound between the two antibodies. This polyclonal antibody is labeled with an enzyme that produces a color signal proportional to the amount of the antigen in the sample. Researchers simply wash away any nonspecific or unbound molecules and only the immobilized antibodies will remain. The stronger the color, the stronger the signal—and the higher the concentration of antibodies in the sample.

Higher-affinity antibodies bind more quickly than lower-affinity antibodies and often bind to a larger section of the target antigen. Using a monoclonal/polyclonal pair of antibodies for targeting and detecting antigens in an ELISA provides higher sensitivity and specificity than only using one antibody or pairing two monoclonal antibodies together. It generates more effective capturing and binding of multiple variants of an antigen or its epitopes, even in low quantities. With higher stability of the antigen-antibody complex and the ability to use the same capture antibody for different detection methods, ELISA kits are extremely versatile.

Selecting appropriate, high-quality antibodies is critical for obtaining accurate and reproducible data. The secondary antibody must respond to the primary antibody. Researchers should only use antibodies that have been manufactured according to exacting specifications, tested against controls during production and release, and validated for accuracy, specificity, and reproducibility within the context of the experiment. Additionally, because different labeling enzymes in ELISAs have various molecular weights, it is also important to consider the choice of enzyme as well as the antibody type and preparation.