Trending
You are at:Home»Foods»Italian Bread 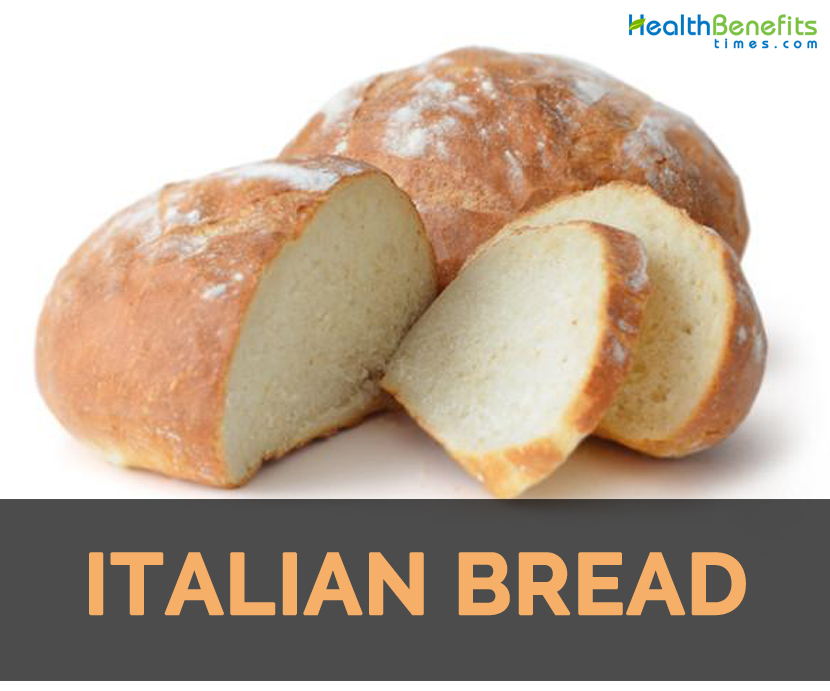 Italian bread is moist and has thin and crisp crust. Its center is fluffy or light and outside is extra crusty.  Italian bread is baked in flat as well as round shape. The loaves are thicker and shorter. Most of the Italian bread is shaped in larger rounds. It pairs well with any meal and is served with dinner or lunch alongside soups, pastas and other main dish. This bread is used to scoop up egg yellow on the plate. When thinly sliced, it is used to make little French toasts.

The preference of cereal divided ancient Mediterranean world in half. In east, Greeks consumed and cultivated barley whereas wheat is the dominant grain of Latin West. Italians grew barley and consume it for various preparations such as soups. But it was never become a vital part of the diet. In the Alps, rye was cultivated to certain extent still it is the minor food resource. Oats and Millet do not acquired much of following in Italy but Buckwheat is well known in northern Italy notably Lombardy’s Valtellina.

The bread and puls made from wheat made was diet for about centuries. In recent years, the decline in hard physical labor, bread lost its importance but puls made standard entry on menus in Italy and worldwide. In 17th century, it changed its form after corn arrived from New World. Wheat was replaced by corn that resulted in polenta.

At an early date, different types of wheat progressed. Due to the meaningful amount of gluten some are adapted to use in bread due to the elasticity it provide to the dough. Durum is condensed which provides the dough to retain its shape while being cooked. This gran is used to make pastas.

Italians developed broad range of breads over centuries and various ancient types are produced on regional or local basis. Recently crackers are added to Italian roster of breads and associated products. Breadsticks or Grissini are specialty of Turin though they are found everywhere today. The homeland bakers shape them with hand so due to this it is thick and also irregular. In central Italy, flat breads are popular and consists Tuscany’s roseary flavored schiacciata, Romagna’s piadina, gnocco and Emilia’s crescentina. Some are baked or fried. Common sweetened breads belong to confectionery category or dolce.

Cecìna is originated in the Tuscan coast. It is a flatbread which is made from a batter that considts of water, chickpea flour and olive oil. Sea salt, rosemary and black pepper are used often for seasoning each thin and crisp pancake. Farinata and Cecina are identical virtually.

This Italian white bread is produced in Liguria. It consists of yeast and wheat flour. It has long, broad and flat shape having slight collapse in center. It is light, soft and porous having a crisp crust.

This egg is produced from natural yeast, flour, butter, eggs and sugar. It is baked traditionally on Easter. Shaped like a dove, it is coated with almonds or course sugar before it is baked.

Its early forms dates back as far as 1287, when bakers are stimulated for producing bread in shape of scrolls called orleti. A loaf of 3 to 9 ounce of Coppia Ferrarese is shaped with the use of two dough ribbons that are knotted together. The end is twisted in a fan shape having four crostni and spokes. It is produced with the use of olive oil, lard, four and malt.

This flatbread is inherent to Liguria. It is made from batter that consists of olive oil, water and chickpea flour. Each thin and crisp pancake is seasoned with black pepper, sea salt and rosemary. Cecina and Farinata are alike virtually.

Spelt which is an ancient grain is cultivated by Tuscany. Generally after husking, flour is streaky white in color.

It is flat and ovenbaked. It is seasoned with the use of Italian olive oil and topped with meats, herbs, vegetables and cheeses. The common seasonings are sage, rosemary and sea salt.

Fragguno is packed with foods such as cheese, salami and eggs.

It is native to Turin and Piedmont and got originated in 17th century. It is twisty, irregular and thin that resemble pencil. Grissini is served with butter and also wrapped in prosciutto.

The bread is frustum shaped having eight pointed star which is coated in vanilla icing that represents snow. Today, everyone could enjoy Pandoro but in ancient times, it is reserved for royalty. In 1894, resident of Verona named Domenico Melegatti received patent to produce Pandoro.

The flat bread is twice baked. It is also called Carta di Musica due to its thin and paper like quality.

The bread has distinguishable characteristics. In Genzano (Italy), it is baked in wood fired ovens and soccie. During 1940’s, it became well known in Rome. It requires the ingredients such as mineral salt, natural yeast, flour and water. Usually, it comes in long rods or round loaves.

It has long shelf life. The dough is homemade and publically baked by a local professional. The finished product is aromatic and very crisp.

Panettone is native to Milan. It requires acidic dough and is cured before shaped into cupola that extends from cylindrical base. Add candied orange, raisins, lemon zest and citron to the bread for flavor. It is served with chocolate of Crema di Macarpone.

It is made in rural parts of Italy. Butter, eggs, common sugar, lemon and anise seeds in Penia for providing unique flavor.

It requires typical ingredients such as salt, lard, flour and water. It is stuffed with vegetables, salumi, cheese and jams.

It is sweet or savory ring shaped which is common in Southern Italy. It is flavored with fennel, poppy seed, onion, sesame, pepper and garlic. It is boiled before baked which provides the rings to gain unique texture.

How to Make It

Step 1: In a bowl, blend sugar, yeast, and one cup of warm water and let it remain for five minutes. Beat at low speed with the use of dough hook attachment by adding two cups of flour, salt and oil to the bowl for one minute. Add additional flour gradually till the dough begins to leave sides of bowl and pull together.

Step 2: Beat five minutes by increasing speed to medium. With plastic wrap, cover bowl of and let it be in a warm place (85°), for 30 minutes or till it is doubled in bulk. Put dough down and let it remain for 10 minutes.

Step 5: For Herbed Focaccia: – Go ahead with recipe as being directed. Shape dough into a ball. Roll dough into a lightly greased baking sheet. Press a handle of wooden spoon to dough for making indentations at one inch intervals. Evenly drizzle dough by using one tablespoon olive oil. Evenly sprinkle one teaspoon of dried Italian seasoning. Bake it for 12 to 15 minutes at 475° or till it becomes golden brown.

Step 6: Pizza Crust: – As directed start the recipe. Shape dough into a ball. On a lightly greased baking sheet, roll dough to an 11- x 14-inch rectangle. Drizzle olive oil or spread pizza sauce or pesto, and sprinkle the desired toppings. Bake it for 20 to 25 minutes at 475°.