Trending
You are at:Home»Herbs and Spices»Health benefits of Japanese raisin tree 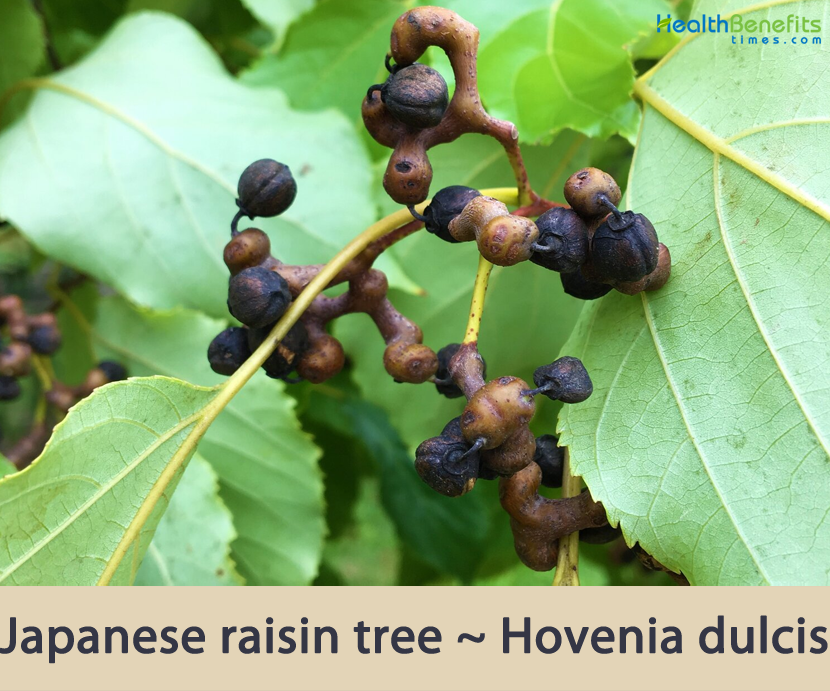 Hovenia dulcis, commonly known as the Japanese raisin tree or oriental raisin tree, is a hardy tree belonging to Rhamnaceae Juss. (Buckthorn family) that has long been valued by practitioners of Eastern medicine. The plant is native Eastern China, Japan, North Korea, and South Korea and is also found growing naturally in the forests of Thailand and North Vietnam. Today it’s cultivated worldwide. Some of the well-known common names of the plants are Chinese raisin tree, Japanese raisin tree, Oriental raisin tree, Coral tree and honey tree. The fruit has long been admired by those adopting Chinese traditional medicine as well as in Korea and Japan. It is a food supplement but in East Asia has a long history in treating liver diseases and detoxifying the blood after alcohol poisoning.

The tree is known for its health benefits when consumed in tea, introduced as an ornamental tree to several countries, also bears edible fruit. It is considered to be one of the most prevalent invaders in Brazilian subtropical forests. The tree is harvested from the wild for local use as a food, medicine and source of materials. It has gained a high reputation for protecting the liver from alcohol damage. The plant is sometimes also grown as an ornamental.

Japanese raisin tree is a fast-growing, deciduous, annual tree or rarely shrub with a fairly open, upright, oval crown. The plant normally can reach 40 to 50 feet in height but is most often seen at 30 to 35 feet tall. The plant is found growing in plains, mountains, secondary forest, roadsides, disturbed areas, forest gaps/edges, regenerating forests, cliff bases, suburban woodlots and thickets. It grows in almost any well-drained soil in full sun or partial shade. It is not for poorly-drained areas or compacted soil, Japanese Raisin tree prefers adequate soil space for root exploration. It has a moderate drought tolerance. Branchlets are brown or black-purple, glabrous, with inconspicuous lenticels. The bark is rigid and light gray with brown valleys.

Leaves are simple, alternate, spiral, glabrous or glossy and smooth. Leaf blade is ovate, broadly oblong or elliptic-ovate, 7-17 cm long and 4-11 cm wide. Their real shape can only be revealed by spreading them wide. Leaves are papery or thickly membranous. Leaf margin is irregularly serrate or coarsely serrate, apex shortly acuminate or acuminate. They are green and glabrous (hairless) on upper side, pale green and glabrous to thinly pubescent (hairy) on nerves beneath, becoming deep brown when dry. Leaf stalk (petioles) is 2.5-6 cm long. Leaves do not change color in fall and drop while they are still green.

The flowers are able to pollinate themselves and can be found on terminal cylindric racemes or panicles. The small flowers have a cream-like color and bloom at the end of spring. They are 0.5-0.6 cm across, white, pubescent; pedicels 0.2-0.4 cm long; bracteoles are lanceolate, subulate and deciduous. Calyx lobes is 0.2-0.3 cm long, glabrous within; petals 0.15-0.2 cm long, cuneate, obtuse, glabrous; stamens 0.12-0.2 cm long; anthers dorsifixed; disc saucer-shaped; lobes linear; style 3-cleft and elongate. They are grouped in large clusters, even if the individual flowers are small. Sometimes the flowers only emerge at the end of summer if the weather is cold, which can hurt the fruit production. Flower-stalks start swelling unevenly after the decay of the flower into a fleshy, knotted mass, red, and sweet to the taste. They are chewed by the Japanese and Chinese. Flowering normally takes place in between May-July.

Fertile flowers are followed by red/brown drupes, about 7 mm across, containing 2 to 4 seeds. Plants begin to produce fruit after three or four years. The fruit is sweet, fragrant and is edible raw or cooked and have a pear-like flavor. When dried the fruits look and taste like raisins. The fruit is sweet and can be used in candies or to make a honey substitute. It can also be made into juice or fermented to make wine and vinegar.

In reality, they are not actually fruits but oversized flower stalks. The seed pods at the end are the actual fruits of the plant, which are not edible. The stem peduncle that supports the seed pod becomes red or brown as the fruit matures and can be consumed when it falls naturally to the ground. They have high sugar content and a taste similar to a pear. While the peduncles are not bigger than a raisin, the tree produces them in large numbers. The brown seed pods fruits are discarded. 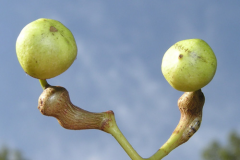 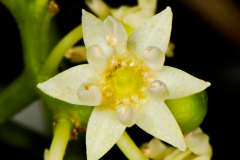 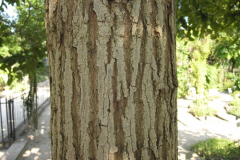 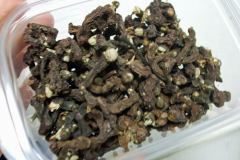 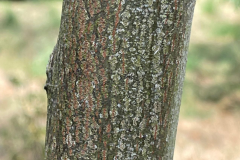 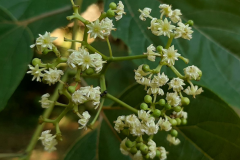 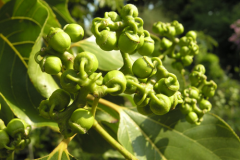 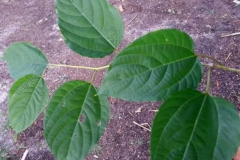 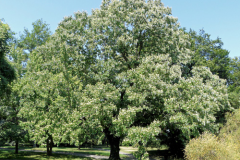 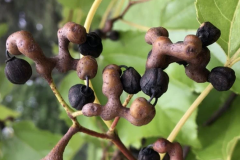 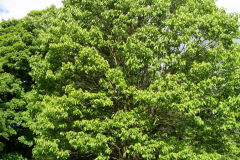 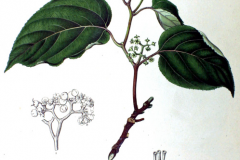 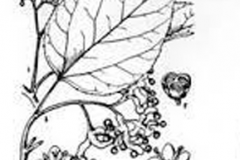 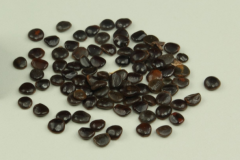 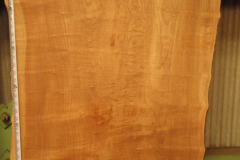 Hovenia Dulcis or Japanese raisin Tree is popular for its medicinal properties making it widespread for dealing with hangover. It is a key source of dihydromyricetin that is used as a hangover medication by a lot of medical practitioners in the sub eastern countries. Some of the most acknowledged medical benefits of Japanese raisin Tree are listed below

Japanese raisin Tree has long been used in Korean and Chinese traditional medicine to relieve intoxication after excessive drinking. Research has concluded that it lowers the blood alcohol level of mice. This recommends that it could help people metabolize alcohol more rapidly and efficiently, which could possibly relieve both drunkenness and hangovers.

Another research found that it prevents alcohol-induced muscle relaxation in rats. This suggests that it could be used to combat the lack of coordination commonly associated with drunkenness. There are no studies of these effects of Japanese raisin Tree on humans, but eating the fruit seems to be safe.

Research published in the American Journal of Chinese Medicine found that it can prevent liver damage from hepatitis C. Research looked at the effects of Japanese raisin Tree in mice infected with hepatitis C and found reduced levels of fibrosis and necrosis of the liver.

However, with the new hepatitis C drugs, you and your doctor may want to consider other more evidence-based and possibly safer ways to treat hepatitis C.

Many people have hangovers after they drink to the point of intoxication. The exact cause of hangovers is unknown, although there are most likely several contributing factors. Typically, hangovers begin when the alcohol concentration in your blood begins to fall. Your hangover peaks when your blood alcohol level reaches zero. For many people, this hangover peak happens at right about the time they wake up in the morning.

However, there are many factors that contribute to a hangover that wouldn’t be affected by H. dulcis. This includes low blood sugar, dehydration, and gastrointestinal upset. Drink fluids, rest, and consider having a couple of glasses of water between drinks next time.

Some people believe that hangovers are partially caused by a sort of mini-withdrawal from alcohol. For people with alcoholism, however, alcohol withdrawal syndrome is a serious, even life-threatening condition. There are currently no prescription medications without significant side effects that can be used to treat alcohol withdrawal.

Research has suggested that dihydromyricetin, a derivative of Japanese raisin Tree, has the potential to treat alcohol withdrawal syndrome. Research conducted with rats found a reduction in withdrawal symptoms including anxiety, tolerance, and seizures. Rats taking dihydromyricetin were also less likely to voluntarily consume alcohol, suggesting that it may also reduce alcohol cravings.

Japanese raisin tree consists of ingredients that protect your liver from the damage caused by alcohol intake. This is one of the surprising medical benefits of Japanese raisin tree. Traditionally, it has been used by a lot of physicians to treat liver related diseases and to detoxify the liver. Taking it in your diet not only helps in aiding hangover, but also helps in eliminating all the alcohol induced toxins from the liver. So if you are more concerned about your liver damage caused due to alcohol consumption, try adding any form of Japanese raisin tree to your diet. You could never go wrong with this.