Trending
You are at:Home»Fruits»What Exactly is Jocote (Spanish Plum) 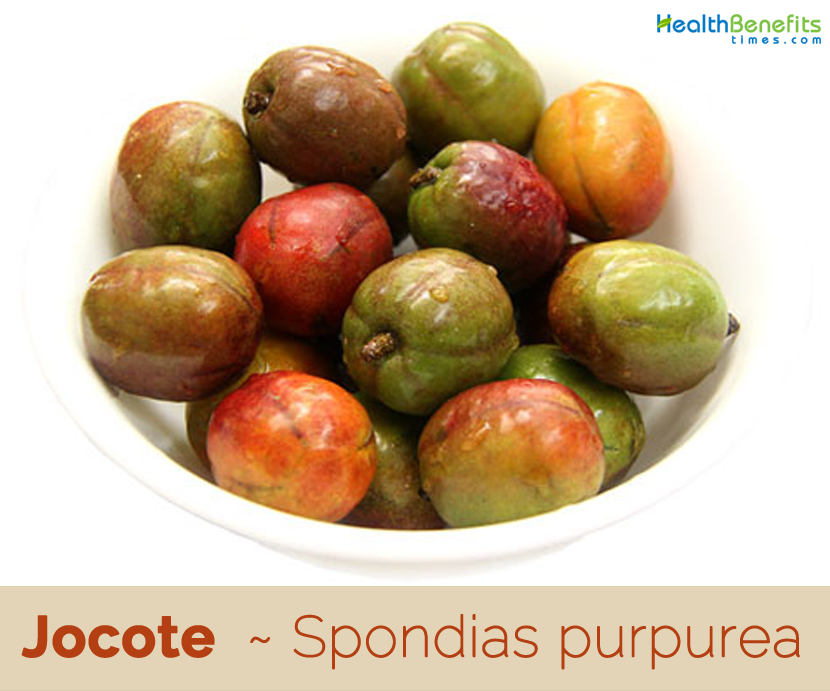 Spondias Purpurea commonly known as Spanish Plum, Seriguela is a species of flowering plant in the cashew family, Anacardiaceae that is native to the tropical Americas, including the West Indies. The tree has been naturalized in parts of Africa, India, Bangladesh, Sri Lanka, The Bahamas, Indonesia, and other Caribbean islands. It is rarely cultivated except in parts of the Brazilian Northeast. Spanish Plum fruit is easily found in the homes of Brazilians, especially those who live in the South and Southeast regions.  Brazil is recognized as a country rich in fruit diversity and this “quality” should be used whenever possible.  It is most commonly known as jocote, which is derived from the Nahuatl word xocotl, meaning any kind of sour or acidic fruit. However, this fruit can be particularly sweet when it ripens long enough. Other popular common names of the fruits are Brazilian Plum, Chile Plum, Ciruela, Hog Plum, Jamaica Plum, Jocote, Ovo, Purple Jobo, Purple Mombin, Purple Plum, Red Mombin, Scarlet Plum, Spanish Plum and Wild Plum.

Fruits are sold along the roads and streets as well as in the native markets. Spanish travelers carried this species to the Philippines, where it has been widely adopted. The fruits are often eaten ripe, with or without the skin. It is occasionally eaten unripe with salt and vinegar or lime juice. They are popular with people who have enjoyed them from childhood (like me), and they serve a useful purpose in the absence of “snack bars”. They can be preserved for future use just by boiling and drying, which keeps them in good condition for several months. They are also used as an ingredient for drinks and during Holyhis fruit is used in a special fruit salad called Almibar.

Jocote (Spanish Plum) is a small to medium-sized fast growing deciduous tree that grows about 7 m (23 ft.) tall with a spreading crown. The plant is found abundant in thickets or open forest, often in second growth, common in fencerows, pastures, and many other situations, ascending from sea level. It is adaptable to a wide range of soils from sand, gravel, heavy clay loam, loams to calcareous soils. Trunk is 30 – 80 cm in diameter. Barks are thick, corky, deeply fissured, grey and usually smooth. Cuts and bruises in the bark produce a thick and transparent exudate. The main branches tend to grow horizontally and all branches are fairly brittle.

Leaves are alternate, pinnately compound, bronze-red or purplish when young, with 5–12 pairs of elliptical-ovate, sub-sessile leaflets, 2-6 cm long by 1.25 cm wide, oblique base, and shallowly toothed towards the acute apex, green, and fall before the flowering period.

Axillary inflorescences come in 1-10 cm long panicles with a few flowers that usually appear at the older and defoliated nodes. Each panicle has male, female and bisexual flowers. The flowers have 4-5 sepals and 4-5 tiny red to purple petals that are usually 2.5-3.5 mm long at anthesis. Pollen is normally not formed because the mother cells of the micro-sporangia do not develop.

Fruit are parthenocarpic. It is an oblong to obovoid, sub-globose or even pear-shaped drupe, measuring 2.5-5.0 by 1.0-3.5 cm, with a smooth and glossy peel. The fruit appear solitary or in groups of two or three. The ripe fruit is normally dark or bright red but can be purple, orange, red-and-yellow, and sometimes even yellow, and can be confused with the yellow mombin. Mesocarp is fleshy and juicy, 5-7 mm thick, acid in flavor, very aromatic, yellow, and fibrous, and is attached to a fibrous and hard endocarp that can be 1.25-2.5 cm long and normally has no seeds but the vestiges of unfertilized ovules.

Spondias purpurea is indigenous to tropical America from southern Mexico through to northern Peru and Brazil and the Antilles. It is an ancient crop of the Mayas in Yucatán and is extensively cultivated in Central America. It is now cultivated pan tropically for its edible fruit. It has also naturalized in some countries, including the Philippines, Galapagos and Nigeria. 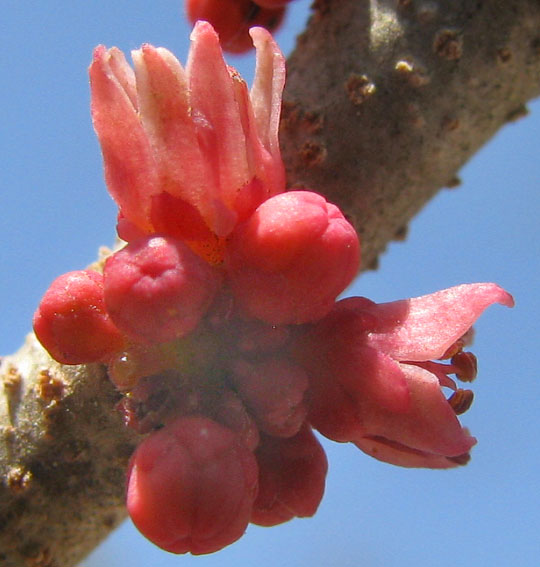 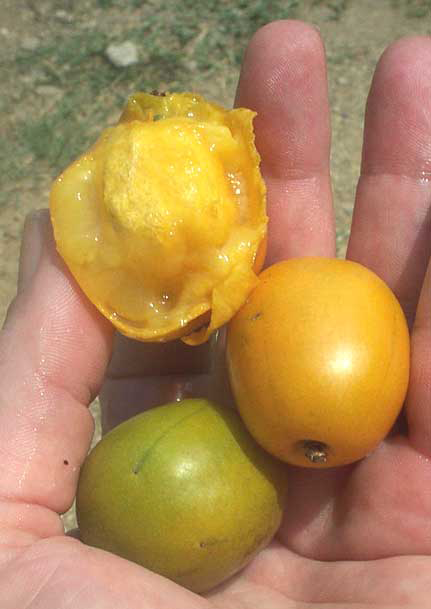 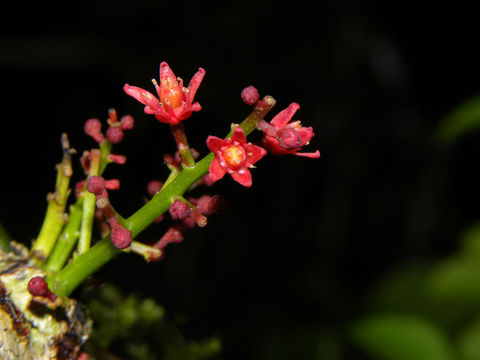 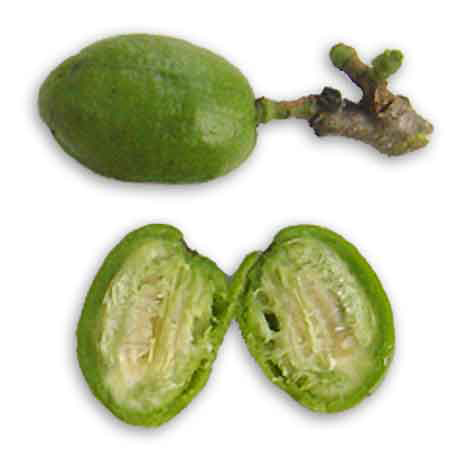 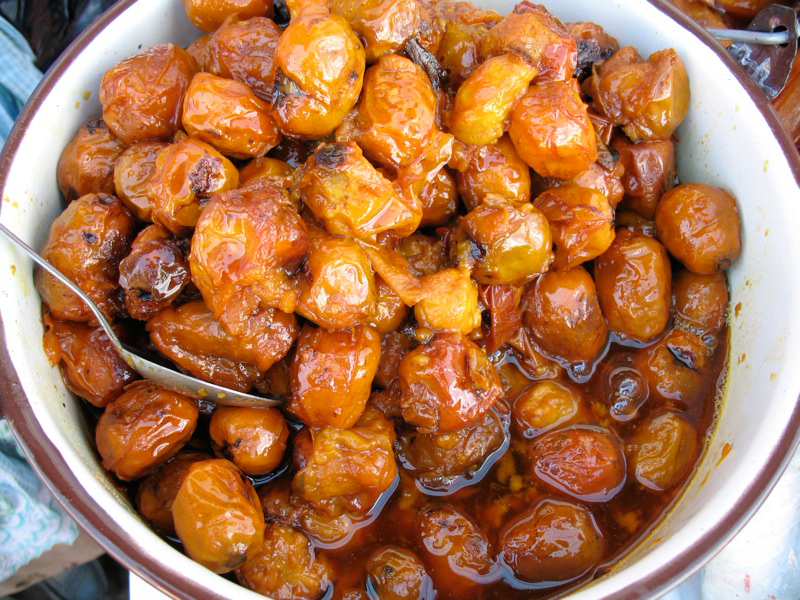 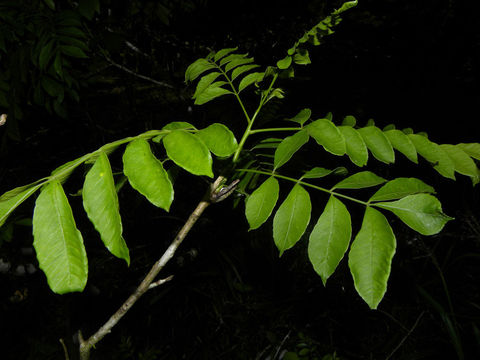 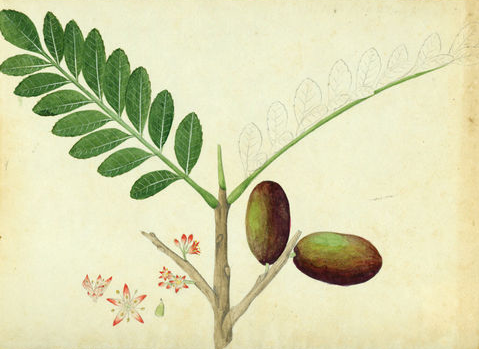 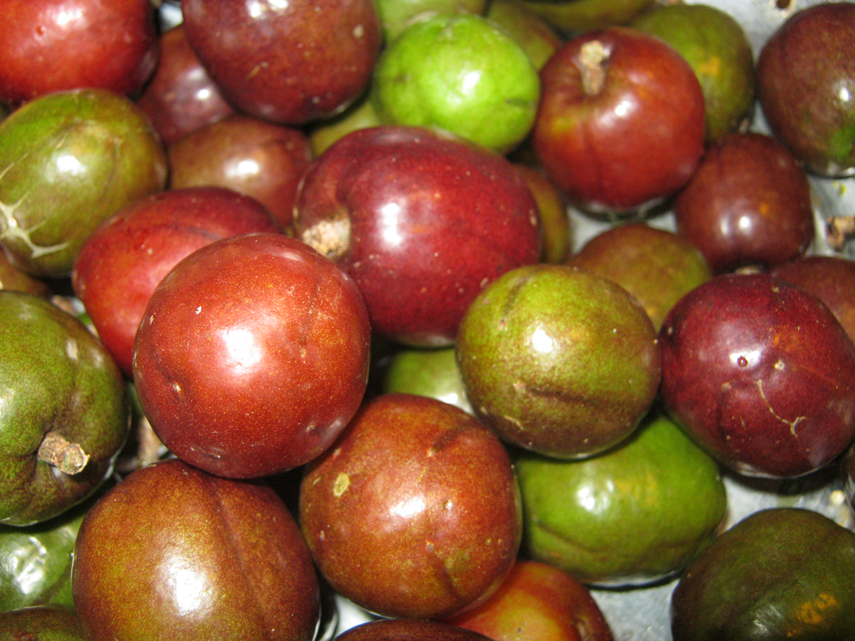 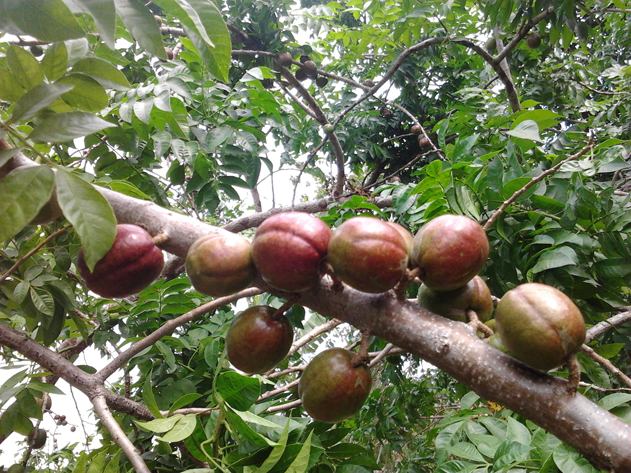 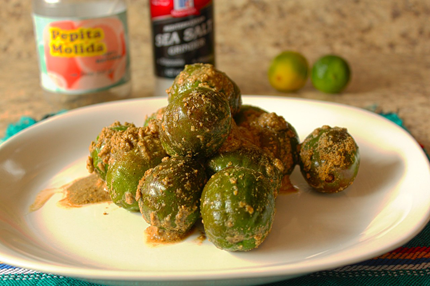 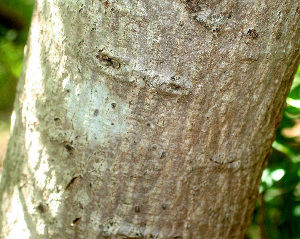 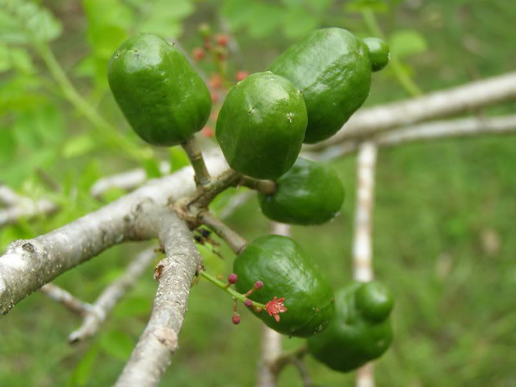 Jocote fruit is tasty and healthy fruit. It contains many nutrients and is widely cultivated throughout the world. The fruit is rich in several Vitamins and minerals. Listed below are few of the popular health benefits of consuming Jocote (Spanish Plum)

Jocote (Spanish Plum) consists of iron and other nutrients, such as vitamins A, B and C, calcium and phosphorus which make it an excellent ally for strengthening the immune system in general. It is so good for this purpose that it is even used to treat debilitating diseases such as dengue.

Spanish Plum consists of good amount of fibers, so it helps in proper bowel functioning, preventing and aiding in the treatment of problems such as diarrhea, dysentery, and gas thus improves digestion.

As mentioned before, the fruit consists of large amount of fibers, it is essential to encourage a sensation of satiety, therefore spacing the time the body returns to hunger. Additionally, every 100 grams of seriguela consists of only 76 calories, and it is rich in vitamins and many other essential nutrients.

Carbohydrates present in the fruit, as well as iron, act in a way to energize the body, in general. This is why it is specified for sportsmen and to reduce the effects of fatigue on the body, pro tennis players are known to use this to their advantage.

Since it is rich in iron, Jocote (Spanish Plum) helps fight anemia, as it benefits the process of oxygenation of the cells, strengthening the whole organism.

6. Helps in proper functioning of the body

It is also rich in antioxidants, thus preventing the action of free radicals, which degenerate the cells of the body, facilitating the entry of diseases and premature aging.

Great amount of vitamins, potassium, and calcium found in seriguela provides to the body nutrients essential to diminish spasms, involuntary contractions of the muscles that commonly occur by a deficiency of such mineral salts.