Trending
You are at:Home»Fruits»Jujube fruit facts and health benefits 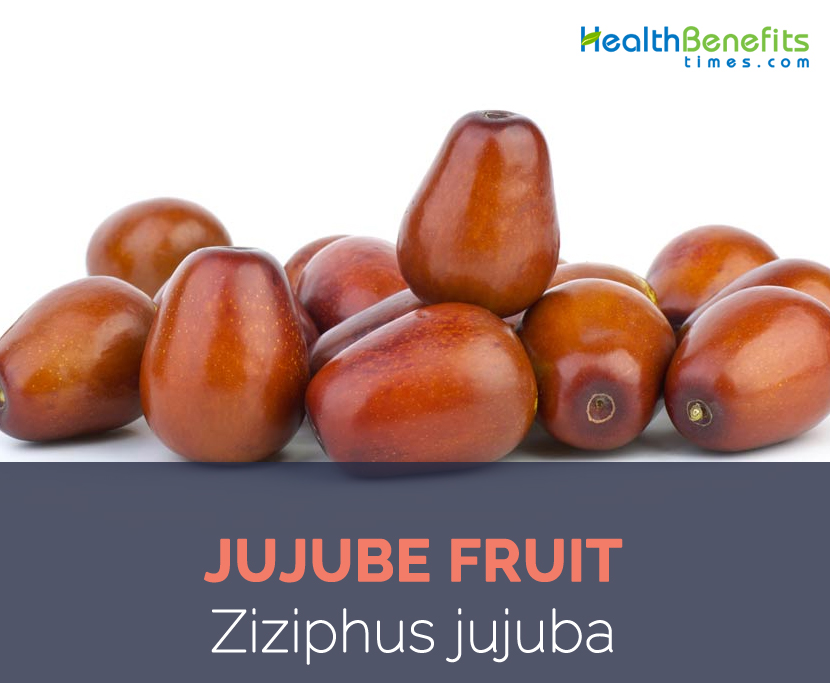 Jujube botanically known as Ziziphus jujube, also known as Chinese red date, Da Zao, and Chinese date is a popular “drupe” fruit of Chinese origin. It grows in natural wild and cultivated orchards in Korea, Japan, and many Middle Eastern regions. Actually jujube tree has been cultivated since 4,000 years ago. In ancient times, it was categorized as “The Five Fruits” together with peach, plum, prunus mume, and apricot. Because of its crispy texture, edible skin, and a sweet-tart, apple-like flavor, Jujube is grown throughout the world. Dry jujube has similar taste and nutrition profile as that of dates; packed with energy, minerals and essential vitamins.

Jujube is a small, deciduous, erect tree growing up to 5–10 m high, spinose or unarmed with brown to gray-brown bark and spreading often drooping branches. It is normally found growing in warm, sunny location and can tolerate many types of soils, but prefers sandy, well-drained soils and does less well in heavy, poorly drained soil. They can grow in soils with high salinity or high alkalinity. It does not perform well in heavy, poorly drained soils.

Leaves are small, ovate or oval and are 1-2 inches long and a shiny bright green. During autumn, the leaves turn bright yellow before falling. There are commonly two spines at the base of each leaf. Some spines may be hooked while others are long daggers. Nearly thorn less cultivars is known. As the growing season begins, each node of a woody branch produces one to ten branchlets. Most of these are deciduous, falling from the plant in autumn.

Flowers are inconspicuous, 1/5 inch diameter; white to greenish-yellow colored somewhat fragrant and produced in large numbers in the leaf axils. The flowering period extends over several months from late spring into summer. Though, individual flowers are receptive to pollen for only one day or less. Pollination is done by ants or other insects and possibly by the wind. Most jujube cultivars produce fruit without cross-pollination. The jujube is well protected from late spring frosts by delayed budding till all chance of cold weather has passed.

Fruit is a drupe, varying from round to elongate and from cherry-size to plum-size depending on cultivar. It has a thin, edible skin surrounding creamy white fleshy, thick flesh of sweet, amenable flavor. In the middle of the fruit, single hard stone can be found which contains two seeds. The immature fruit is green in color, but as it ripens it goes through a yellow-green stage with mahogany-colored spots appearing on the skin as the fruit ripens further. The fully mature fruit is entirely red. Shortly after becoming fully red, the fruit begins to soften and wrinkle. The fruit can be eaten after it becomes wrinkled, but most people prefer them during the interval between the yellow-green stage and the full red stage. At this stage the flesh is crunchy and sweet, reminiscent of an apple. Under dry conditions jujubes lose moisture, shrink and become spongy inside. Research in Russia indicates very high vitamin C content. The fruit has been used medicinally for millennia by many cultures. One of its most popular uses is as a tea for sore throat.

Jujube is considered to have originated in China where they have been cultivated for more than 4,000 years. It was distributed beyond China centuries ago and today it is grown to some extent in Russia, northern Africa, southern Europe, the Middle East, Caribbean and the southwestern United States. It is widely cultivated and naturalized in Eurasia.

Jujube fruit benefits are very recognized for thousands of years. Jujube fruit is used as herbal medicine for hundreds of years within China along with other Asian countries. Since this fruit is extremely healthy and also loaded with numerous minerals and vitamins, it will help in the development and also maintenance of the blood stream, entire body hormones, bone fragments, muscles, skin, hair, body enzymes and also neurotransmitters. Listed below are some of the well-known health benefits of Jujube fruit:

Saponins and alkaloids present in jujube fruit is directly associated with purifying the blood and eradicating harmful toxins from the body’s systems. This antioxidant effect helps prevent a large number of disorders and diseases, and also ease the stress on the immune and lymphatic system.(1)

Regular consumption of sufficient amount of mineral is one of the best ways to strengthen your bones. By increasing minerals like calcium, phosphorous, and iron (all of which are prevalent in jujubes), you can confirm that your bones will remain hardy and strong for years to come. As we age, we tend to suffer from osteoporosis as well as other bone degradation conditions, so including jujube fruit to your diet can slow or reverse this trend.(2)

Jujube fruits are linked to improving digestive processes within the body. This is mostly attributed to its fiber content, but the saponins and triterpenoids also play an important role in this by enhancing the uptake of nutrients and encourage healthy movement of food through the bowels. This help to prevent constipation, cramping, bloating, and excess flatulence, as well as more serious gastrointestinal conditions, like colorectal cancer.(3)

People suffering from insomnia or restlessness can consume the seeds extract of the jujube fruit which is a good remedy for insomnia. The calming nature of the organic compounds contained in this beneficial fruit can calm the body and mind, so if you find yourself unable to sleep at night, then perhaps a small jujube decoction is exactly what you require.(4)

Frequent consumption of fruits and vegetables  is a common suggestion for people trying to lose weight, and jujube is another that can simply be added to that list. With a low calorie count and a higher protein and fiber level, jujube help to satisfy your nutritional needs and fill you up, which prevent you from snacking in between meals. This will help you maintain your diet or prevent any additional weight gain.(5)

Jujube is one of the good sources of antioxidant content, like vitamin C, vitamin A, and numerous organic compounds and acids. Antioxidants help to neutralize free radicals, the dangerous byproducts of cellular respiration, which are liable for several chronic diseases and illness within the body. Vitamin C also encourages the production of white blood cells, the first line of defense of our immune system.(6)

Jujube consists of certain anxiolytic and soothing effects on the body. By regular use of jujube oil extract or consuming the fruits themselves have an impact on the hormonal levels and encourage a calm, relaxed sensation throughout your body and mind. For individuals who frequently suffer from chronic stress or anxiety, snacking on some dried jujubes or looking for a jujube supplement can help ease the mind and safeguard the body from the serious side effects of extended exposure to stress hormones.(7)

However the exact mechanisms and particular relationships between jujubes and cancer are still being studied, early results show positive relationship between the bioactive compounds in jujube and a reduction in free radical activity and the spread of cancerous cells. The antioxidants present in jujubes make this an effective preventative method for cancer as well as other long-lasting conditions, including heart disease.(8)

Jujube fruit is a good source of iron and phosphorous, which are actually key elements in red blood cells. If you suffer from low iron content in your blood or anemia, you may experience symptoms like muscle weakness, indigestion, fatigue, cognitive confusion and lightheadedness. By increasing your iron and phosphorous content with jujube fruit, you are able to increase blood flow, thereby oxygenating your organ systems and extremities more effectively, giving you an energy boost!(9)

Antioxidant present in Jujube is equally important for the skin. Jujube juice and extract have been used topically to deal with numerous irritations and inflammations on the skin like psoriasis, eczema, acne. Additionally, you can consume the jujube fruit to get many of the same effects. It also helps to prevent the appearance of wrinkles and scars, as well as keep the skin tight and energized with oxygenated blood.(10)

Other Traditional uses and benefits of Jujube

Other health benefits of Jujube fruit

How to select Jujube fruit

Choose jujubes which are fresh and also blemish-free fruit. The jujube needs to be the size of an olive or even tiny date and really should be heavy because of its size. A more mature jujube will probably be wrinkled.

How to Store Jujube fruit

Jujubes can keep within the fridge forever. Put them within an air-tight package.

In addition to their therapeutic use, the candied dried fruits are sometimes consumed like a snack, or even along with tea. They are offered possibly red or black (known as hong zao or hei zao, respectively, in Chinese), the second being smoked to boost their taste. In China, , a sweetened tea syrup that contains jujube fruits can be found in glass jars,photo and canned jujube tea or jujube tea in the form of teabags can also be obtainable. However, not widely accessible, jujube juice and also jujube vinegar may also be created.

In China, a wine produced from jujubes known as hong zao jiu can also be produced. Jujubes are occasionally maintained by storing within a jar filled up with baijiu (Chinese liquor), that allows them to be placed fresh for a long period, particularly from the winter. These kinds of jujubes are known as jiu zao(literally “spirited jujube”).