Trending
You are at:Home»Fruits»Know about the Nipa palm 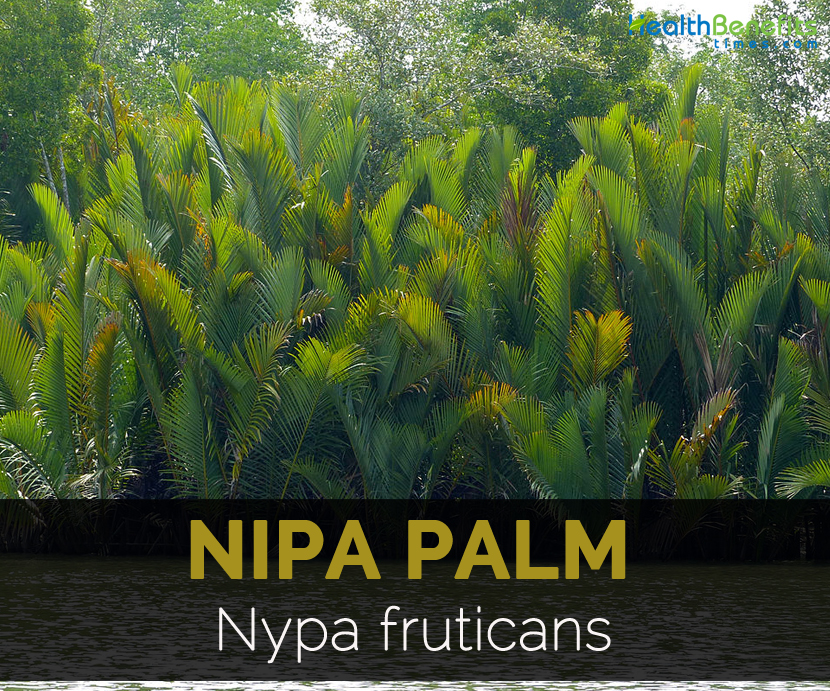 It is classified as palm and has been declared as non-threatened palm in South East Asia. It thrives in mangroves areas in Jambi Province but underutilized. Various parts of nypa tree are utilized such as leaves for thatching, roofing and nypa sap to make sugar. The young inflorescence before flower opening is tapped to yield a copious sap to make sugar called gula Malacca, alcohol or vinegar, molasses or treacle.

Young nipa shoots are edible and the flower petals are infused for making aromatic tisane. The heart cabbage is consumed as vegetable. White jelly like endosperm of immature seed is translucent, sweet and consumed raw or preserved in form of syrup or made into gelatinous sweetmeat balls which is used as ingredient in Singapore, Malaysia and also known as Attap chee. Vinegar is made from the sap of Nipa palm.

Nipa palm is trunkless and clumping palm which grows to the height of 10 meters having subterranean horizontal stem which grows beneath the ground and rosette leaves and flower stalk grows upwards above ground surface. Leaves measures 9 meters long and is pinnate, stiffly erect having two ranks of 60 to 130 cm long, stiff, alternating, lanceolate leaflets which is pointing upwards from overlapping stout leaf bases. Leaves have 120 leaflets per leaf and has shiny green upper and powdery lower surface. Rhizomes and leaf bases are light and spongy. Inflorescences are yellow, subterminal, long, sturdy 1 m long stalks which arises from the base of the plant. Stalk has long sheathing spathes and few ascending spathed branches. Spathes are orange tipped olive green. Female inflorescence is densely packed and spherical head of flowers. Male inflorescence is a club shaped spike of closely arranged flowers which emerges from lateral stalks below female inflorescence. Flowers (male) are cream color which are borne on branches and central stalk. Female flowers are lemon yellow and form in round head size of a golf ball which terminates the central stalk. The flower converts into brown, fibrous chestnut which is ovoid, angular, 10-15 cm long and 5-8 cm wide and forms a large and spherical infructenscence about  30-45 cm in diameter. The fruit has one seed which is egg shaped having homogenous, soft and edible endosperm. 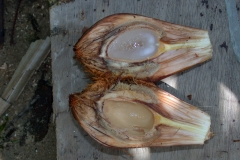 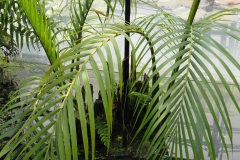 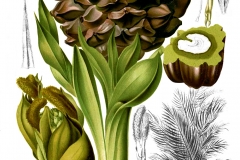 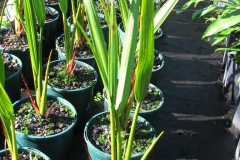 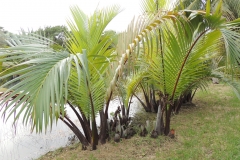