Trending
You are at:Home»Fruits»Facts about Lemonade Berry 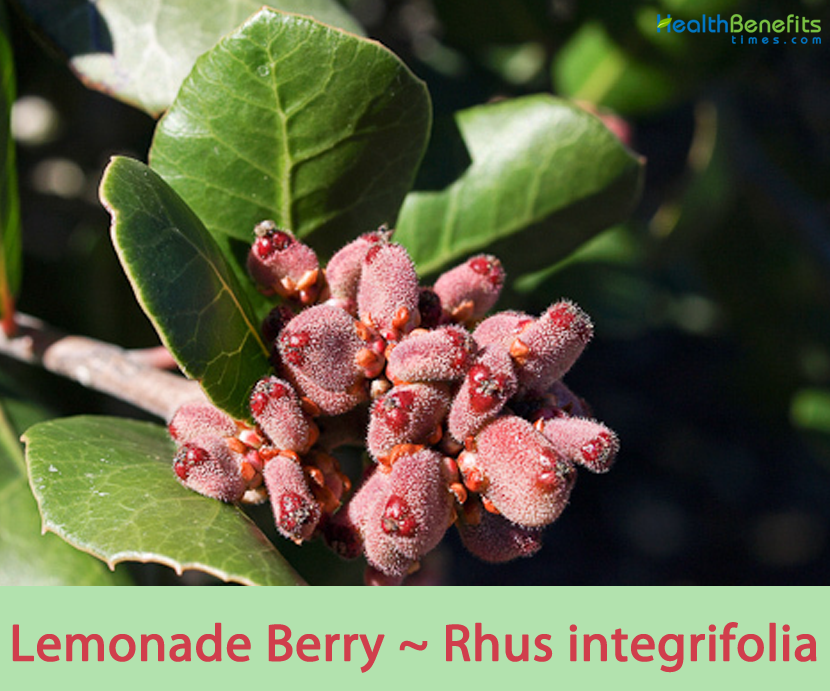 Rhus integrifolia commonly known as Lemonade Berry is a shrub to small tree belonging to Anacardiaceae (Sumac or Cashew family). Other S. California natives in this family are the Poison oak, the Laurel sumac and the closely related Sugar bush and Sour berry/Basket bush.  The family includes a number of well-known members including the Cashew, Mango and Smoke Tree.  The non-native Brazilian and Peruvian Pepper trees, which have so naturalized that many think them S. California natives, are also members of this family.

The plant is native to transverse and Peninsular Ranges, southwestern and Pacific coastal California, from Santa Barbara County and the Channel Islands to western San Diego County, with its range extending to north-central Pacific coastal Baja California and some offshore islands like Cedros Island. Some other popular common names of the plant are lemonade berry, Lemonade sumac, Sour berry, and Coast Sumac. Lemonade berries take their name from their tart, citrusy flavor. The genus name Rhus is derived from ‘rhous’, an ancient Greek name for Sumac and the specific epithet integrifolia indicates that the leaf margins are entire, not divided, as are many Rhus species.

Lemonade Berry is a rounded, aromatic, evergreen shrub or small tree that normally grows about 6 to 10 feet tall, sometimes taller and near the coast shorter and spreads between 10 to 15 feet wide. The plant is found growing in coastal sage scrub, chaparral, ocean bluffs, canyons, dry places and sandy sterile soil. The plant thrives on well-drained soils and tolerates heat and windy conditions well. The species endures sandy as well as medium loam soils, and it can even thrive in nutrient deficient soil. This plant tolerates mildly acid to mildly alkaline soils, and is common on north and east-facing slopes with where shady, moist conditions are prevalent.

The plant has stout, short trunk and many small, spreading branches. Young plants manifest smooth reddish bark, while more mature individuals have cracked, even scaly, grayish bark with the smooth red bark displayed underneath. Twigs are rather stout and flexible, and reddish bud ends are diminutive and pointed. There is often a multi-furcate branching structure from the base of the plant. A mature plant is large and thicket-like with a sprawling arrangement.

Leaves of Rhus integrifolia are simple, evergreen and found in an alternating pattern. They are elliptic or oval in shape and are 5-7 cm long and 2-4 cm wide on reddish twigs. Mature leaves are dark green, younger leaves are brighter, while the newest leaves and young stems may have a reddish tinge. The leaves may have pinkish margins or midribs (the main vein of the leaf) and new leaves/branches are a shockingly bright pink or orange. The texture of the leaves is leathery to the touch and somewhat waxy in appearance. Leaves can vary from flat to slightly rolled in shape and often have small sharp tooth around their margins. Leaves are waxy, smooth shiny green above and a paler tone below.

Lemonade berry produces showy and fragrant flowers that range in color from pink to white.  The flowers are clustered at the ends of branches, with literally thousands of flowers on a mature shrub to create beautiful formations.  This species flowers towards the end of winter and through spring (February – May).  The plant has five green sepals, five white to rosy-pink petals, and five stamens. The small flowers are only six millimeters across. The ovary is superior and usually has a single ovule; although in pistillate flowers, the stamens are small and infertile. The flowers remind some of the non-native Indian Hawthorn, a common garden shrub in S. California.  In fact, Lemonade berry is a good native substitute for Indian Hawthorn.

The flowers have a lightly sweet fragrance and are an importance source of nectar and pollen for winter-flying bees, their principal pollinators.  Individual plants may contain only male or only female flowers (dioecious) or a combination of bisexual (complete) and unisexual flowers. This arrangement likely allows the species to maximize fertility in different environments.   The male and bisexual flowers have conspicuous anthers with yellow pollen (above).  Plants are not self-fertile, so you’ll need at least two for good fruit production.

Fertile flower are followed by showy drupes that are small, sticky, flattened, fleshy with a large seed or two. They are about seven to ten millimeters in diameter. The fruits start out a pink-white color and ripen to red-orange in late spring or summer. The fruiting season follows the flowering season and occurs in spring and summer. The elliptical fruit presents tight clusters at the very ends of twigs. Fruits are coated with a gray, viscous material that disappears as the season progresses. The coating is very sour with a flavor similar to lemon. Native Californians sometimes eat the fruits fresh, many of us prefer to soak the pink fruits in warm or cool water to extract the lemony flavor.  The ‘flavored water’ that results (after the fruits are strained out) can be sweetened to produce a lemonade-like beverage. 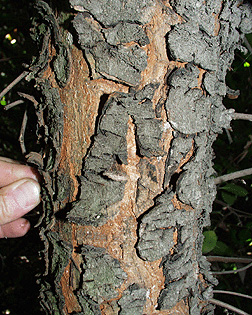 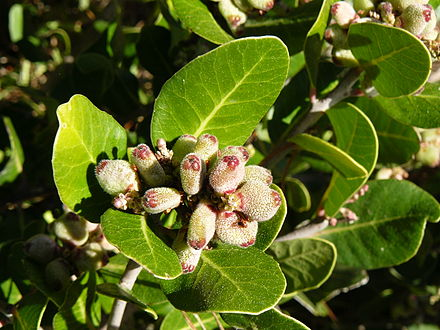 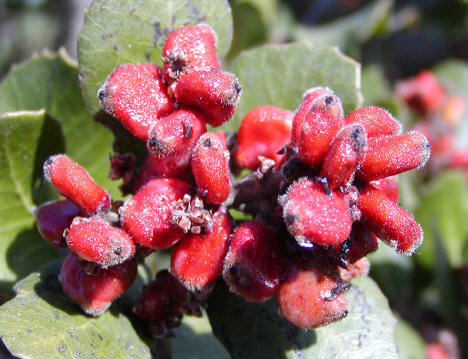 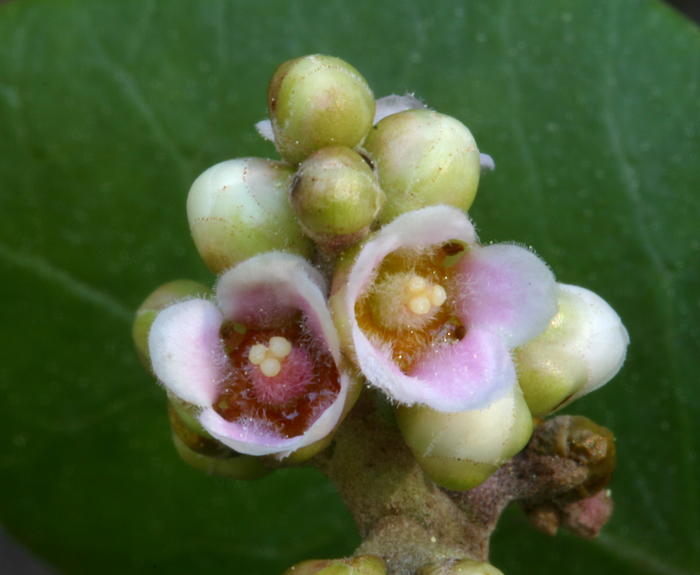 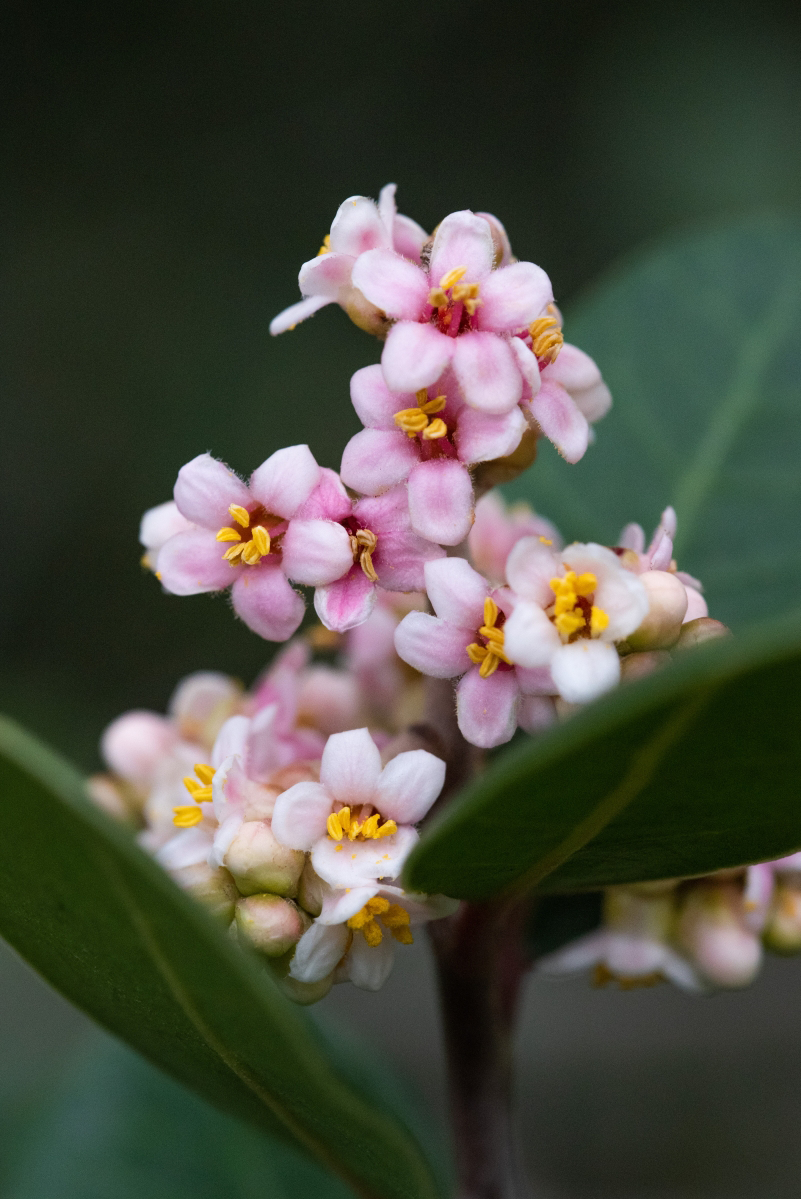 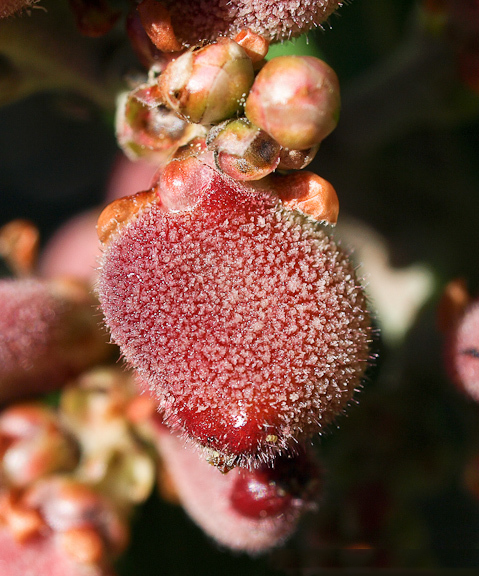 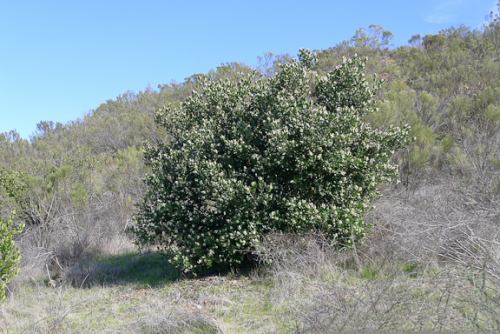 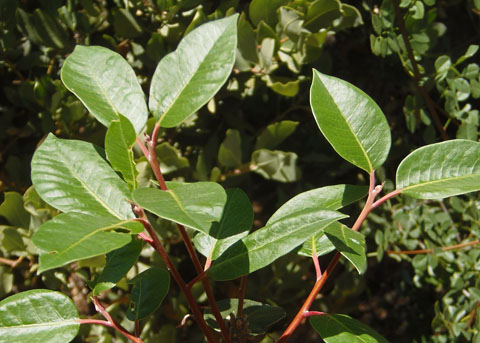 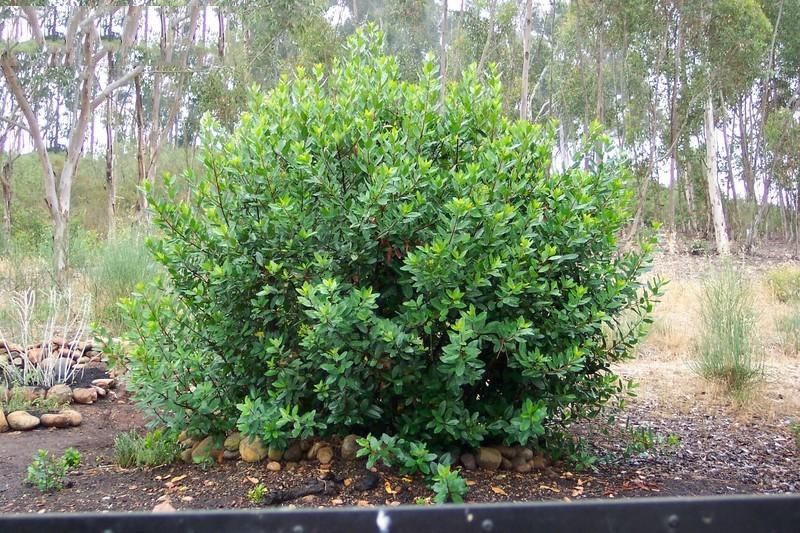 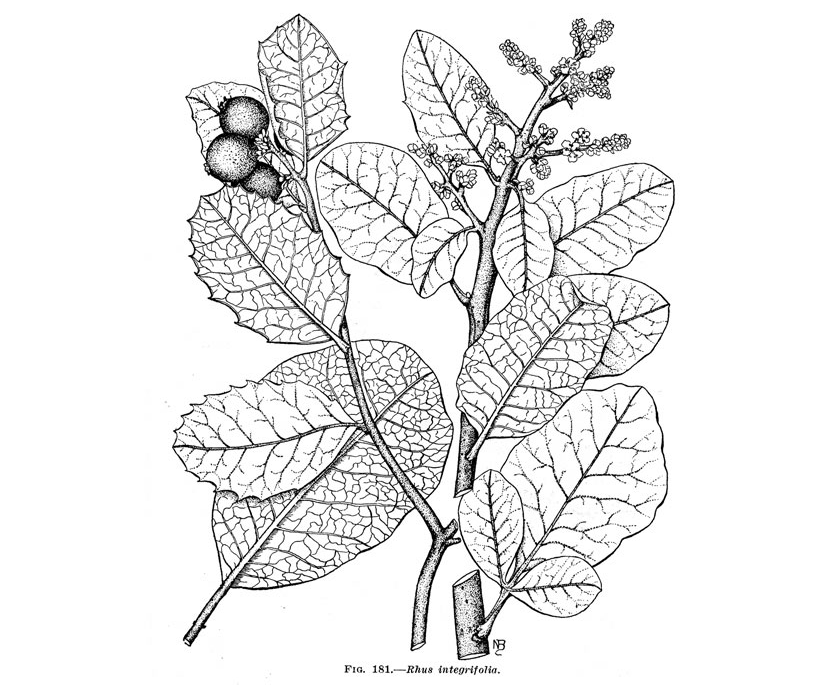 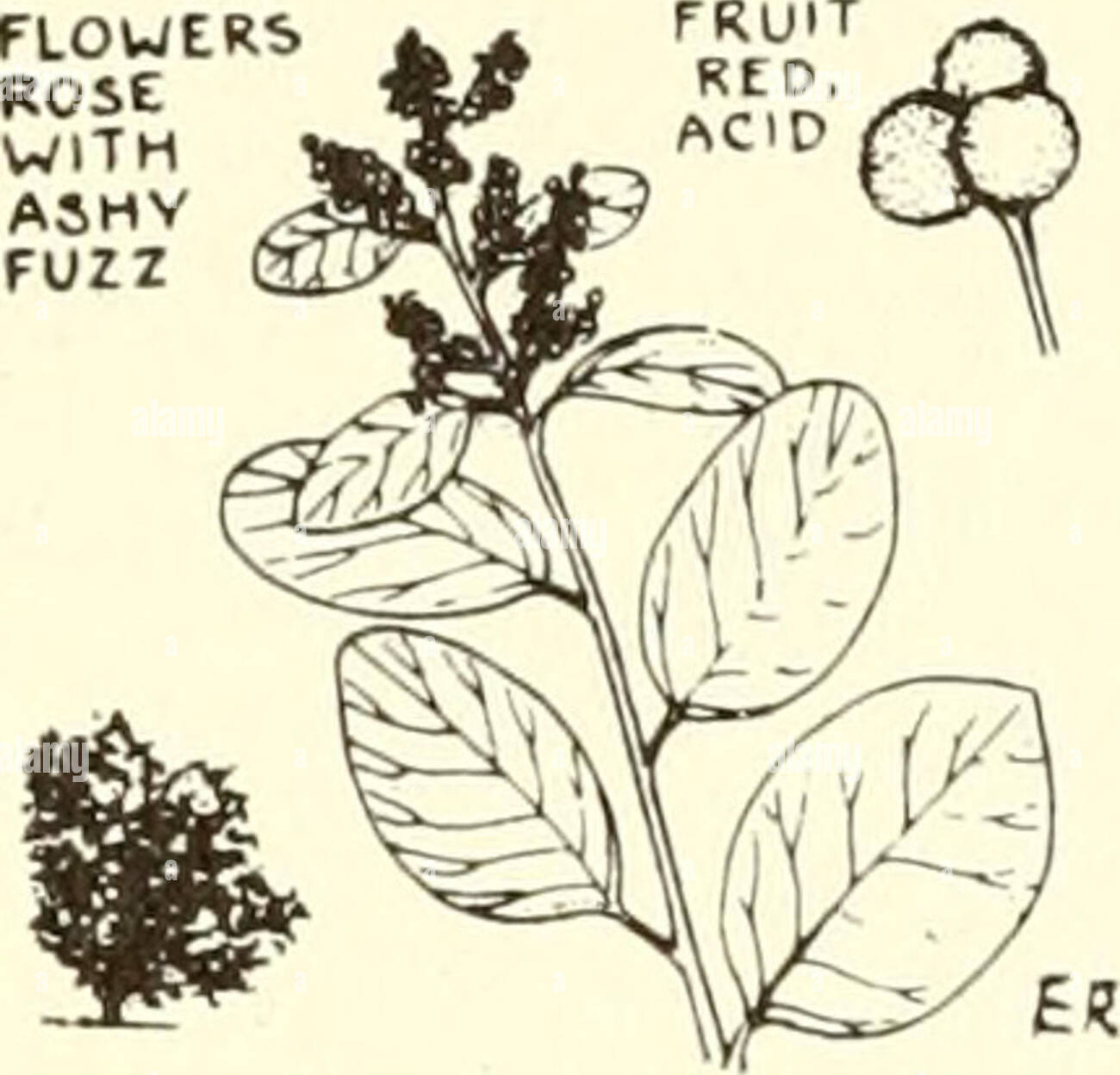 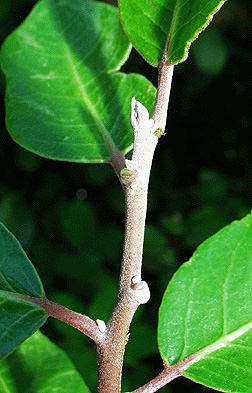 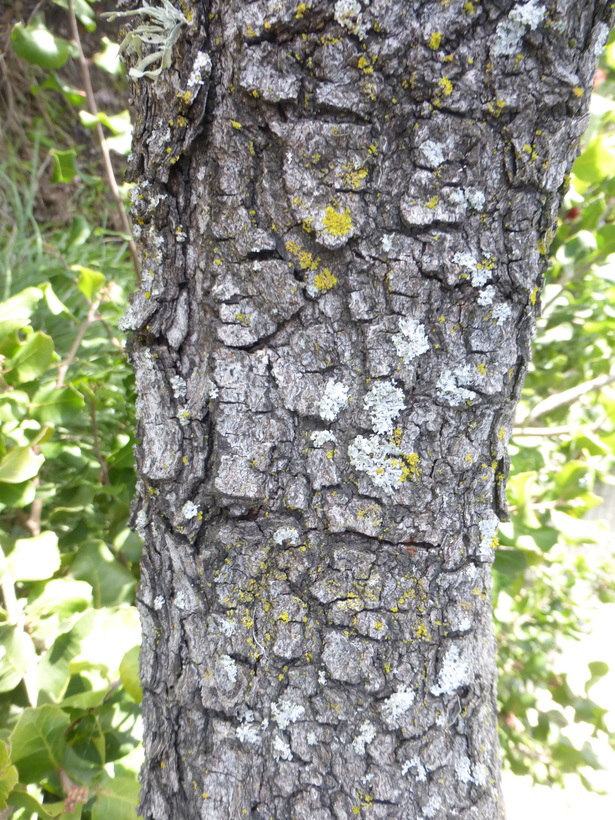 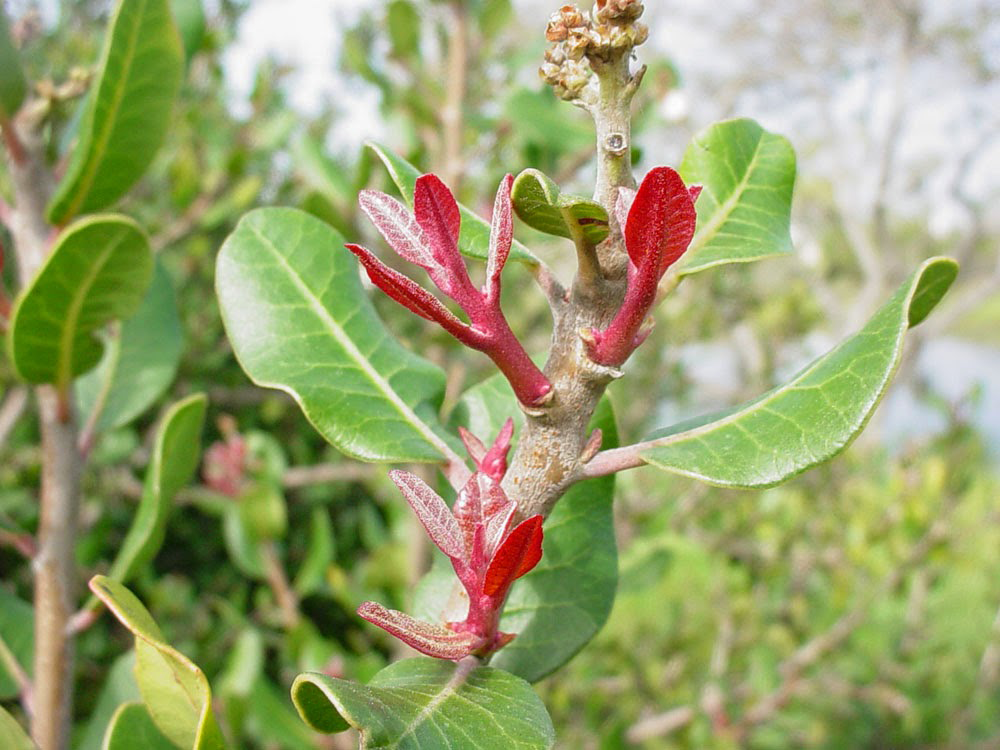 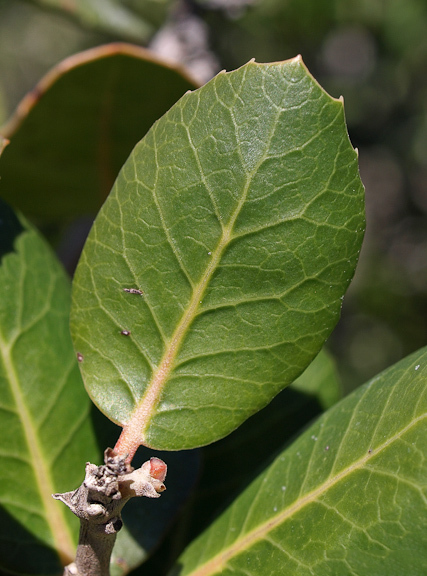 Lemonade Berry has been known to consist of anti-fungal actions on human pathogens. It is known to be effective in treating numerous types of lung infections. In some cases it has also been found to have anti-microbial effects.

Lemonade Berry has been known to act as a powerful anti-inflammatory agent. When applied externally they are known to cure pain related to arthritis and rheumatism.

Lemonade berries have also been known to be effective in purifying the blood. They have been known to remove any toxins from the body and are also known to have cooling effect on nerves.