Trending
You are at:Home»Herbs and Spices»Facts and benefits of Liverworts 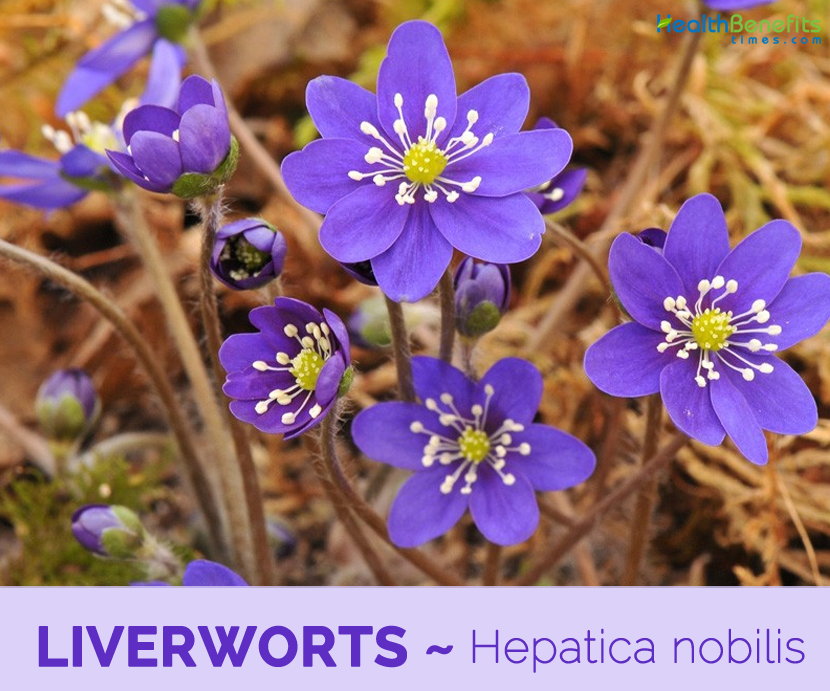 Hepatica nobilis commonly known as Liverworts is an herbaceous perennial in the buttercup family (Ranunculaceae).  The plant is native to the eastern United States ranging as far north as Iowa and south to the Florida panhandle and to central and eastern Canada. Apart from Liverworts it is also known by several other names such as Hepatica, Sharplobe hepatica, Roundlobe hepatica, herb trinity, kidneywort, liverleaf, liverweed, noble liverwort, round-leaved hepatica and trefoil. Normally a lowland plant, it has been spotted in the Allegheny mountain range. Many variations of the species hepatica exist around the world, including those on the Asian and European continent. At least one variation is indigenous to Japan. Taxonomists continue to argue over liverwort’s standing in relation to these relatives.

Liverwort is a deep-rooted and hardy plant. The botanical name of the herb, Hepatica, is believed to have originated from the Greek word hepar, meaning “liver,” as well as the Latin word epatikos, meaning “affecting the liver.” Anemone is also of Greek origin and refers to the wind. Two of hepatica’s other common names, liverleaf and liverwort, come from the supposed resemblance of the leaves to the human liver, both of which have three lobes.

The most commonly grown garden forms are derived from H. nobilis a very hardy hepatica found in deciduous woodland throughout Europe, the Balkans, southern Scandinavia and Russia. It even occurs inside the Arctic Circle, so this species is very hardy. The six-petalled flowers come in blue, white or pink and the single-flowered forms often seed around in woodland gardens.

Specialists also offer a wide range of hepaticas from other parts of the world. There are twelve species and all grow on woodland slopes where leaf mould gathers. They include some excellent garden plants.

The most common hepatica in the wild and the easiest to grow in the garden, with flowers that come in pure white, cobalt blue and vivid pink. The handsome three-lobed foliage, which is sometimes marbled, rarely gets untidy. Flowering usually takes place during March (9-15cm).

From central Romania, this larger-flowered hepatica tolerates drier conditions and more shade. Flowering often occurs in February, with blooms consisting of nine or so rounded blue petals with a green middle. It spreads by rhizomes, but not aggressively so. Scalloped leaves are not as pristine as those of H. nobilis (15cm).

A pale-blue form raised at Thomas Carlisle’s Loddon Nurseries at Twyford in Buckinghamshire over 50 years ago.

This much stronger, blue-flowered hybrid was named ‘Harvington Beauty’ after the Worcestershire village where it was found growing, often in dry conditions. Although no one knows for certain where it came from, Helen Ballard’s daughter once lived in this village so it might be another Ballard hybrid.

One of the best garden forms is a large, evergreen hepatica from Korea with green-eyed, ivory-white flowers and hairy jade-green foliage. It flowers in February and will grow under deciduous shrubs. The large leaves are thickly textured with fine hairs round the edge so it’s a handsome foliage plant.

Despite serious safety concerns, liverwort is used for treating gallstones and liver conditions including jaundice, liver enlargement, hepatitis, and liver cirrhosis. It is also used for treating stomach and digestive tract discomfort, stimulating appetite, relieving sensation of fullness, regulating bowel function, and stimulating the pancreas. Listed below are few of the health benefits of liverworts

Since a long time ago hepatica has been recommended for gallstones. Gallstones are formed in the bile either by excess cholesterol or bilirubin and can cause many problems including chronic pain in the shoulders and abdomen area as well as nausea. It is thought that drinking the extract of hepatica in the form of tincture or the cold extract can crush the gallstones in the bile.

Frequent consumptions of hepatica, especially in the form of infused water, help to ease the burden pancreases have to carry. Hepatica consists of many chemicals whose functions are to break down carbohydrates, proteins and lipids, such as flavonoids. Not only that, some of the chemical compounds in hepatica is also known to have stimulating properties toward many internal organs, which are mostly related to digestive system.

Hepatica has been used by people of old as herbal remedy for liver diseases. There are basically many herbs and even vegetables which are said to improve liver conditions, such as turmeric, ginger, sweet potatoes and raw vegetables in general. Anyway, the practices seemed to go on that people associates hepatica with medicine for liver.

Hepatica’s astringent nature helps to stimulate the contractions in the gastro internal tracts. Thus, the digestion processes are also sped up. Thus, drinking hepatica tea might be considered as alternative treatment for digestion problems such as constipations where the functions of the bowel areas aren’t working quite as it should be.

Hepatica is an alternative solution to reduce the cholesterol level in the blood. The methods by which hepatica works seem to stimulate metabolism and cleansing the blood from some harmful substances. Although doesn’t work directly at reducing cholesterol, the presence of hepatica as tonic for liver certainly help the work of liver in breaking down cholesterol.

It seems that when it comes to herbal remedies, some of them can be fixes for multiple health problems. Such is the case with hepatica, while its primary use is to cure liver diseases; turns out people have been using it for other purposes too. Being drunk as an herbal drink, hepatica can give mild astringent feeling to the stomach which is supposed to be relaxing and soothing to the stomach.

Astringent nature of hepatica makes it possible for hepatica to contracts many involuntary muscles in our bodies. Thus, the extra works which the muscles have to bear will signal the brain to supply more blood. In turn, the brain makes the heart to pump more blood and thus increasing blood circulation. Unfortunately, the method of by which hepatica influencing blood circulation is not really well-documented or even ever documented at all.

Due to its mild and relatively safe nature, people are using hepatica as tonic for various purposes. Some use it daily the way they do with tea. Very little does everyone know why and how it works, but people also use hepatica for appetite stimulants. Some considers the taste to be the cause, as is the case with herbal plants in particular; hepatica’s strong scent might induce enhanced appetite.

9. Soothing to the Nerves

Liverwort when drunk as a tea, it has all the relaxing and soothing benefits that most of herbal tea does. Flavonoids as well as saponins contents in hepatica work wondrously together as both anti-inflammatory and antioxidative agents. As is the case with some herbs and spices that contain saponins, such as garlics and gingers, hepatica can also help relaxing the tensions in the muscles as well as the nerves.

Traditional uses and benefits of Liverworts