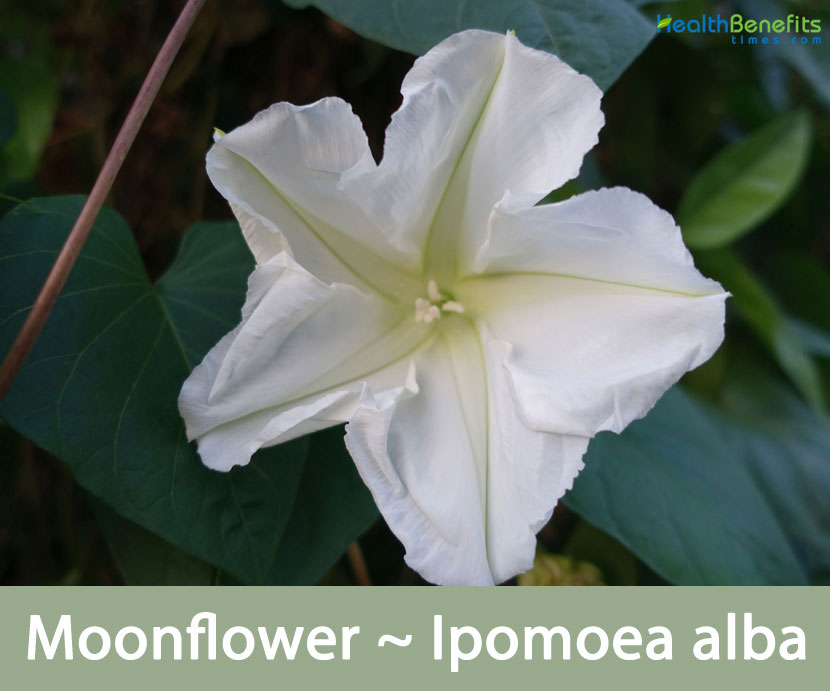 Genus name comes from the Greek words ips meaning “worm” and homoios meaning “resembling”, in possible reference to the sprawling underground roots of plants in this genus. On the other hand, some experts suggest the genus name is in reference to the worm-like twining plant habit. Specific epithet Alba refers to the white color of the flowers. It derives from the Latin word album for a writing tablet now used to mean white in reference to the tablets historically being white. The common names of Moonflower or Lady-of-the-night referring to the flowers habit of opening at night, it attracts night pollinating moths to the fragrant flowers and their being round in shape like a full moon. The plant is occasionally harvested from the wild for local use as a food and medicine. It is often grown as an ornamental, where it quickly can provide a temporary screen or barrier.

Moonflower is a short-lived, fast-growing, old-fashioned, annual or perennial herbaceous liana that normally grows about 5–30 m tall with twining stems. The plant is found growing in watercourses, riparian areas, moist forests, wet forests, urban bush land and disturbed areas (e.g. in parks, along roadsides, and along railway lines) in the sub-tropical and tropical regions. It grows in moist habitats on sandy and loamy well-drained soil.  Its stems are hairless (i.e. glabrous), but the aerial climbing stems sometimes have numerous small projections.

Its relatively large leaves are alternately arranged along the stems. They are 5-20 cm long and 4-20 cm wide. They are borne on 5-18 cm long stalks (i.e. petioles) and are slightly thick or occasionally even slightly fleshy in nature. These leaves are usually strongly heart-shaped (i.e. cordate) with pointed tips (i.e. acute apices), but can sometimes be slightly lobed.

The large trumpet-shaped flowers have a very long and narrow greenish-white floral tube that is 7- 15 cm long and five large white spreading lobes (10-15 cm wide). They are borne in several-flowered clusters, or occasionally singly, in the leaf forks. These flowers open at night, hence the common name “moonflower”, and usually wither by early the next morning. They have five small sepals that are 5-20 mm long with pointed tips and are borne on 7-15 mm long stalks. Each flower has five whitish-coloured stamens and a style that are exerted from the end of the floral tube. The flowers also tend to remain open longer during cool temperatures – which may also cause the segments to snag or tear as they open. Flowering occurs during summer and autumn.

Fertile flowers are followed by a small capsule that is 2-3 cm long with a pointed tip. As the fruit matures the flower stalk becomes enlarged, and when fully mature the fruit turns from green to dark brown or blackish in color. It then splits open to release four large, hairless, whitish-coloured seeds that are about 10 mm long.

The Mesoamerican civilizations used the Ipomoea Alba morning glory to convert the latex from the Castilla elastica tree to produce bouncing rubber balls. The sulfur in this morning glory served to cross-link the rubber, a process predating Charles Goodyear’s discovery of vulcanization by at least 3,000 years. Moon Vine is native to American tropics, but has naturalized in many places where it was introduced. 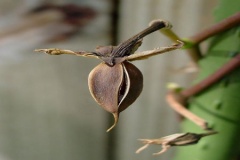 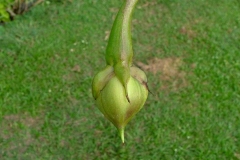 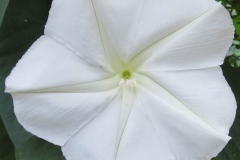 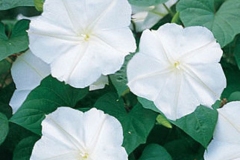 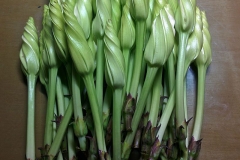 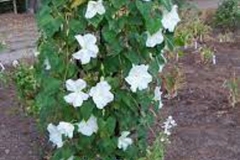 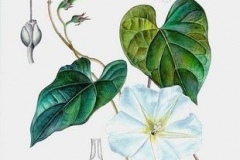 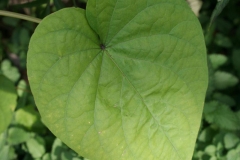 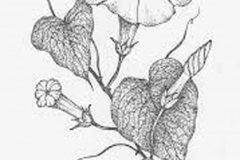 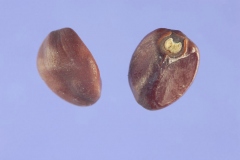 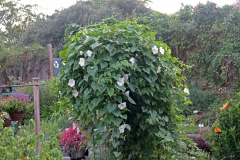 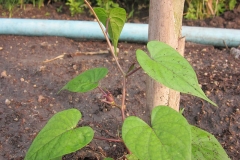 Traditional uses and benefits of Moonflower

Side effects of Moonflower

Moonflower consists of several compounds poisonous to the human body, including atropine and scopolamine, which both interfere with the nervous system. The CDC reports that a person who has ingested Moonflower may experience hallucinations, anxiety, confusion and, in some cases, coma. Nervous-system effects generally take place within 1 hour of Moonflower ingestion and may last 24 to 48 hours, according to the CDC.

Hallucinations from Moonflower may be either visual or auditory. A November 2006 report in “USA Today” titled “Jimson Weed Users Chase High all the Way to Hospital” reports that some people have severe hallucinations and become a threat to themselves or others.

Hyperthermia, or high body temperature, may also occur from Moonflower ingestion, as the plant interferes with the body’s ability to cool itself. A person may also experience flushing of the skin and skin that is dry and hot to the touch.

Moonflower increases pulse rate and raises blood pressure. The chemical atropine, consists of in Moonflower, may cause cardiac arrhythmia, or an abnormal heart rhythm, which may lead to cardiac arrest, according to a 2002 article in “The Permanente Journal” titled “Jimson Weed Poisoning—A Case Report.”

Seedlings are weak and easy to pull or hoe. Small infestations can be cut near the base of the plant and the roots dug out by hand. For larger infestations with many stems, cutting and subsequent applications of herbicides are required.

The herbicides 2, 4-D, atrazine, diquat, diuron, glyphosate, oxyfluorfen, pronamide and simazine are recommended for annual morning glory species. For large infestations, the stems can be cut higher up (breast height) causing the upper growth to die. Then the basal stems can be cut closer to the ground, followed by an undiluted (or up to 1: 3 dilution) dose of an herbicide onto the stems.