Trending
You are at:Home»Herbs and Spices»Health Benefits of Moth Mullein 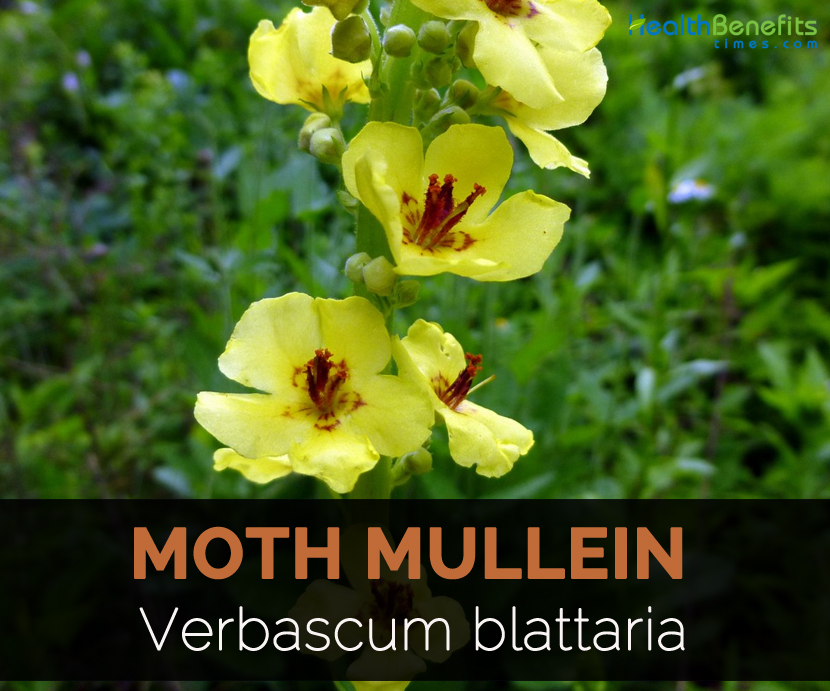 The genus comprises some 300 species native to Europe, North Africa, western and central Asia. Some species have escaped and are common in the United States, growing in recent clearings, sparsely inhabited fields and along roadsides. They vary greatly in size and form, but most have a columnar aspect, are hairy or woolly, and have yellow, red, purplish or brownish-red flowers arranged in dense terminal spikes or in narrow panicles. The best-known species in America is the common V. thapsus, marked by a stout, erect, unbranched, woolly stem 2–3 ft. tall, with basal leaves, narrowing at the base into wings which pass down the stem. This feature is characteristic of V. thapsus, enabling it to be distinguished from the various other Mulleins. The dense spikes of small yellow flowers bloom in July and August; the fruit, a capsule or pod. The flowers and leaves have a faint, rather pleasant odour, and a somewhat bitterish, albuminous taste. Keeps well if properly dried and stored for winter use.
Moth Mullein Image Gallery 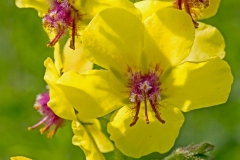 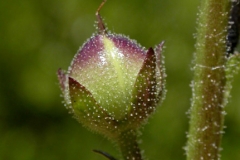 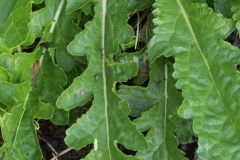 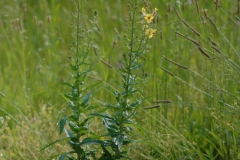 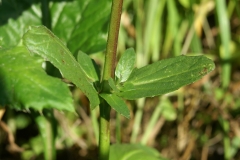 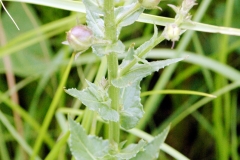 Moth Mullein is a biennial plant which develops basal rosette leaves in its first year of growth. The stem is also extremely short during this first year. Rosette leaves are oblanceolate with deeply toothed edges and are attached to the stem by short petioles. Rosette measures 16 inches in diameter during this first year with each individual leaf upto 8 inches long. It forms a fibrous root system with deep taproot. In second year of growth, stems grows erect and slender reaching to the height of 1½ to 3 ft. Leaves form on flowering stem, elliptical with shallow toothed edges and sharply pointed tips. Flowers produced during second year of growth forms on a loose raceme. Flower is attached individually to the flowering stem by a pedicel which reaches a length less than one inch. Flowers have five petals and five anther bearing stamens. Each flower measures 1 inch in diameter. Flowers are yellow and white with slight purple tinge. Stamens are orange in color and are covered in purple hairs. Flowers are followed by a small and simple fruit that is spherical in shape with diameter less than 0.5 inches. Fruit is dark brown in color with numerous dark brown seeds.

Leaves have prominent veins, irregularly toothed edges, lack hairs and are dark green. Rosette leaves are deeply toothed, oblong, and narrow at the base and attached to the compressed stem of rosette by way of short petioles and measures 8 inches long. Leaves on flowering stem are alternate resembling rosette leaves, shallow toothed and have sharply pointed tips. Stem leaves lack petioles and are triangular with broad bases which clasp the stem.

Flowers attach to the flowering stem by slender and one inch long stalks. Flower buds resembles button. Flowers are white or yellow when bloomed which composes of petals which are united at the base and deeply five lobed at the top forming a saucer like shape less than 1 inch in diameter. Each flower has 5 stamens which are orange with purple hairs. Flowers form in loose clusters at the top of the flower stem.

Fruits are downy capsules usually round measuring 1/3 inch in diameter. Each capsule splits into 2 cells when mature filled with tiny and dark brown seeds. Seeds surface is marked with wavy ridges.

The dried leaves were smoked to relieve lung congestion by the Indians, this being one of their many uses. Herbalists of the space age know of its remedies for coughs, colds and pectoral complaints, including haemorrhages from the lungs, shortness of breath and pulmonary complaints. Mullein has been considered a treatment for haemorrhoids for several hundred years and is still used for this purpose, both internally and as a fomentation. A decoction made with equal parts of Horsemint (Monarda punctata) and Mullein (V. thapsus) and taken three times a day is excellent for kidney diseases.

1 teaspoonful of the leaves or flowers to 1 cupful of boiling water. Of the tincture, 15–40 drops in warm water every 2–4 hr., according to condition.

A very early German remedy for deafness resulting from dried earwax, wax too soft or insufficient wax: “Mullein oil, sun distilled from green Mullein flowers, 3 to 5 drops twice a day until the condition is corrected.”

A fomentation of the leaves in hot vinegar and water forms an excellent local application for inflamed piles, ulcers, tumours, mumps, acute inflammation of the tonsils, malignant sore throat, dropsy of the joints, sciatica, spinal tenderness, etc. A mixture of simmered leaves can also be inhaled through a teapot spout for many of the mentioned conditions.

Mullein, or Koroviak Visoky, is common in all parts of Russia. This herb is seldom mentioned in ancient books, but was a common medicine in the Middle Ages.

Leaves and flowers are used as Astringent, Demulcent Expectorant and Tonic in the form of teas, extracts, as Nastoika (with vodka) either straight or in combinations. The uses are many as most natural treatments improve or assist the body as a complete unit instead of the specialized isolated practice of civilized thinking. Mullein is thought of first for pulmonary conditions, colds, shortness of breath, asthma; thus improving heart conditions, nervous disorders, kidney and bladder. Female and venereal diseases associated with, or without, bleeding. Epilepsy and headache in children.

The leaves and flowers simmered and used as a wash for old wounds, broken skin and to kill skin epidermis worms. Fresh leaves bruised and applied to boils and carbuncles.

For tapeworms of cows the fresh leaves are given internally.