Trending
You are at:Home»Fruits»Health benefits of Blue Waterlily 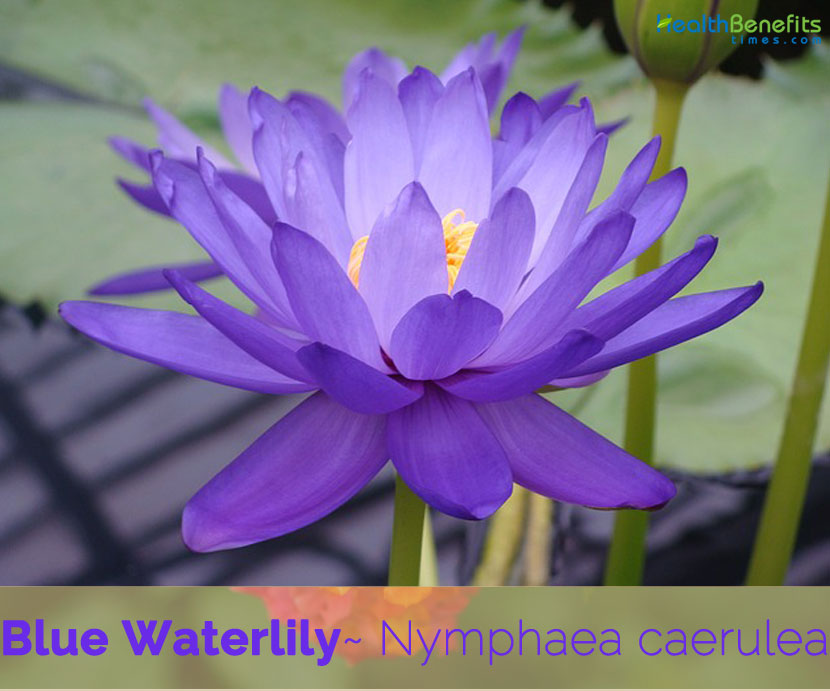 Genus name comes from the Greek word nymphaia referring to a water nymph. Specific epithet means dark blue. The flower thus became a symbolic depiction of the origins of life. Nevertheless this symbolism, blue lotus has been historically used in Egypt for a variety of other purposes including stimulant, aphrodisiac, sexual enhancer and remedy against general illness. Flowers have an alluring fragrance that supposedly induces feelings of heightened awareness and euphoria. Perfumes and oils were created. Teas made from the flowers reportedly induce feelings of calmness and tranquility. Blue lotus flowers have been widely used throughout history as a common motif in Egyptian art and architecture. King Tut’s body was found to be covered with blue lotus petals when his tomb was opened in 1922.

Blue waterlily is a clump-forming, aquatic perennial herb with thick black spongy tuberous rhizomes anchored in the pond mud by spreading roots. The water lily does not have true stems.  The plant is growing in freshwater habitats (i.e. dams, ponds, lakes, lagoons, wetlands, and slow-moving waterways).  This beautiful blue flower is considered holy by Indians, particularly the Buddhists. Historians have always considered the blue lily symbolically rich and associated it with the ancient Egyptian culture. But recent research has discovered that it has healing properties as well. It was used by ancient Egyptians as a stimulant to increase sexual desire. It was also a symbol of the Egyptian deity ‘Nefertem’. Today we know that the sacred blue lily can be used for a variety of medical purposes. It can be used to make various healthy concoctions including blue lotus tea, wine and martinis! All you need to do is to soak the petals for up to three weeks to obtain the intoxicating beverage.

They are relatively short-lived and are replaced regularly throughout the growing season. They start out as a soft shiny green at the center of the plant. As they age, the petiole lengthens, pushing the leaf towards the outer perimeter making room for the new growth, and they develop light brown or purple splashes which eventually cover the leaf, leaving only the veins green. They then start to die, turning yellow then brown and eventually disappearing under the water.

The large, elegant blue flowers are held well above the water at the tip of a sturdy green stalk and appear almost constantly from spring until the end of summer (September to February). They are bisexual, star-like and regular, with 4 sepals, green on the outside and white to blue on the inside, and many blue petals. In the center of the flower are numerous blue-tipped bright golden yellow stamens.

There are a different color form other than blue that occasionally occur, e.g. white, mauve and pink, but blue is the most common and the water lilies at Kirstenbosch are blue. Flower buds rise to the surface over a period of two to three days, and when ready, open around 9:30 am and close about 3:00 pm and stay closed all night. The flowers and buds do not rise above the water in the morning, nor do they submerge at night. The opening and closing mechanism of the flowers is controlled by the sepals. If they are removed, the flower loses the ability to close. A fully open flower measures 15-20 cm across and each flower lasts for about four days. The flowers are sweetly fragrant and are visited constantly by bees who are the most likely pollinator.

Blue Lotus plant was originally found in ancient Egypt, where it has grown abundantly along the Nile River for centuries. There, it has formed part of daily life and has been commonly used for a number of applications. While some valued it for its mental sharpening abilities, others admired its aesthetic beauty, and women would often decorate their hair with it in order to enhance their beauty.

Fans of the occult used it as a sacrament to aid in widening their awareness and heighten their consciousness during particular ceremonial rituals, rite of passage initiations, as well as the celebration of specific harvests.

There are five African varieties: 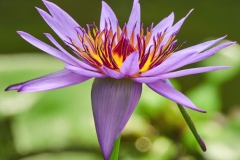 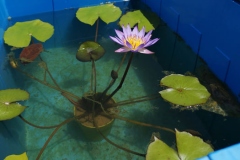 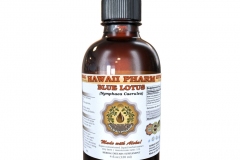 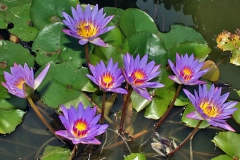 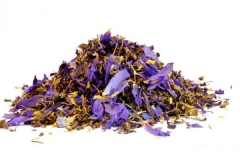 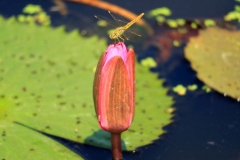 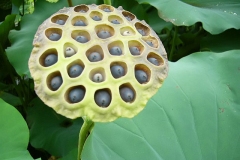 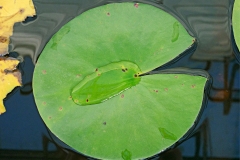 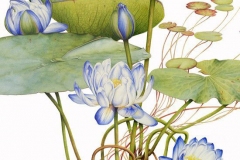 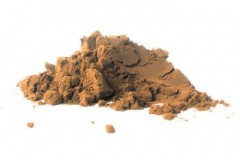 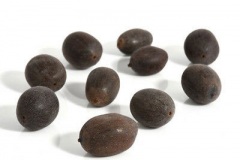 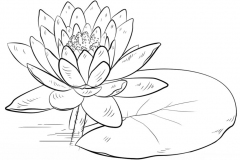 In today’s world where the pollution levels are very high, consumers are constantly attracted to cosmetic products which includes of natural ingredients and extracts of nature. Natural extracts are also supportive in body massage and some forms of yoga. Some of the benefits of the Blue water lily are listed below:

With the growing competition and stressful life, mental disorders are increasing at a fast pace. Root of this beneficial flower treats several mind related disorders like anxiety, stress, memory loss, depression etc. in an herbal way. It helps in improving the memory power.

Diabetes, which has taken epidemic proportions today, can be easily and effectively treated with the seeds of this medicinal flower. Diabetic difficulties such as cardiovascular problems are potentially regulated by this sacred water lily.

Have you noticed recently that you’re not remembering things as well as you used to? Blue lotus flower can help a lot to you. Not only do users report a heightened sense of spiritual awareness, they also experience improved memory as well.

Blue lotus herb helps promote a healthier circulatory system, which means that blood flows through the body more easily. Sharper mind and memory is a result of the increased circulation to the brain. Blue lotus thus helps accelerate the process of forming memories.

Stomach disorders like diarrhea and dysentery can be cured by using the rhizome of this beautiful sacred river flower. Its rhizome possesses the ability to treat dyspepsia. This flower is also used in treating jaundice and other internal gastrointestinal disorders. Consuming concoctions containing this healthy herb is known to help treat damaged liver too.

Some women go through hell each month because of numerous menstruation problems. These problems can be treated and naturally cured by the usage of Blue waterlily. The use of this flower or its extracts can help normalize irregular periods and ease menstruation cramps.

If you are suffering from chronic pain then consider incorporating the blue lotus herb into your daily herbal routine. The Ancient Egyptians discovered its pain relieving properties, and for this reason blue lotus drug has been used ever since to help manage the symptoms of various ailments.

In modern times, it has been used to alleviate the pain associated with serious illnesses such as arthritis and cancer. In addition to tea and powders, blue lotus is also found in tincture form. Those who want to take the supplement can add the desired amount to their morning coffee or tea to help manage their pain and feel better.

If you are suffering from oily skin and its problems such as acne, pimples and scars then start applying the extract of Blue waterlily on the affected skin. It will help in balancing the oil content in the skin and gives you problem free beautiful skin always.

If you are suffering from urinary ailments then Blue waterlily would surely help you. Seeds of this flower have immense potential in regulating the urinary system and heal the ailment properly.

Consumption of Blue waterlily gives you a quick and effective relief from painful constipation in a natural way. There are various medicines which are made with the extracts of Blue waterlily to cure stomach disorders. It assists in making the movement of bowel easy.

Blue Lotus flower is quite effective natural sex stimulant that works today as it did at the time of Cleopatra. It works well for both men and women. With Blue Lotus, you can add passion to your love life and possibly uplift your relationship to new, exciting heights. Blue Lotus extract works mostly well since you can use it to make a refreshing aphrodisiac blended with the relaxing effect of wine.

Blue waterlily has been found to provide relief from different kinds of stress and anxiety. Roots of this plant have been shown to help promote relaxation and give a sense of euphoria. Users have reported that a cup of blue lotus tea makes them less anxious and gives them restful sleep.

Those who take blue lotus supplements (available in the form of seeds, essential oil, tea, powder and extract pills) regularly report that they feel a heightened sense of awareness. This unique supplement makes people more aware of their emotions, and more associated to their spiritual side.

In several countries extracts from the seed of blue lotus is used within the preparation of the skin care product that has immediate association to the skin. Thus if you suffer from dry, flaky skin, use this natural moisturizer and display your new found glowing skin!

Several research reveal that blue lotus can even facilitate increase the amount, body moreover as physical property of brittle hair. So, if you’ve got limp, dull hair, grab some blue liliaceous plant extracts and use it on your hair for stunning, healthy hair!

Rhizome of this scared flower possesses magical ability to cure dyspepsia. Research also shows that it is very effective in healing jaundice and various other gastrointestinal ailments. Beverage made using this herb also effectively treats your damaged liver.

Blue waterlily is a widely used nerve tonic which relaxes your brain cells, tissues and muscles and renders a soothing touch to them. It also helps in curing imbalances in central nervous system and disorders arising out of these imbalances.

Oil extracted from the petals of this sacred flower demonstrates to be very good body message oil. This oil is completely pure and helps in soothing each and every cell of the body. It loosens up your body muscles and makes you rejuvenated. This sacred flower has magical pain relieving properties and use to relax tired and stiff body muscles.

Blue Lotus is typically taken as a tea, with a recommended dose of 5 grams per person, steeped in boiling water and then allowed to cool before drinking it directly. The Egyptians also used to soak it in wine for hours at a time, at the same dose of 5 grams per bottle.

If you’re not looking to smoke anything, you can always make tea or wine. The tea is fairly easy to make. You have to soak about 5 grams of the plant in hot water and allow it to cool before you can consume it.

For the wine, the recipe is a bit more time-consuming, but still fairly easy to accomplish. Place 10 grams of your blue lotus herbal mix inside a mason jar and fill the rest with your favorite wine. Let the mixture sit for a week, or two if you want an extra-potent solution. Shake this daily without opening the jar. You can mix other stuff in there to add some flavor, like vanilla or damiana. Another thing we recommend is dropping a spoonful of honey into the Mason jar to sweeten the drink once it’s ready.