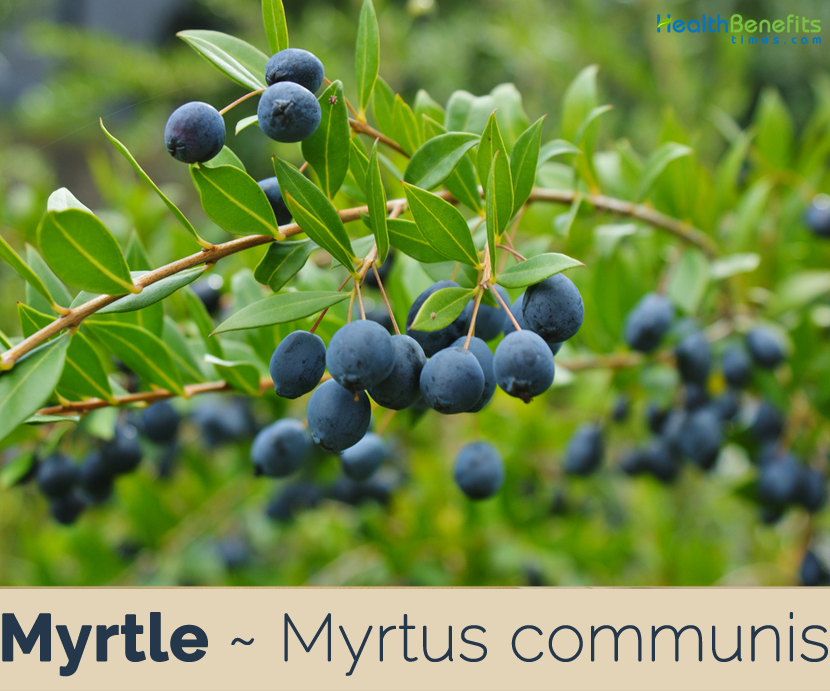 Myrtus communis, the common myrtle or mytle, is a species of flowering plant in the myrtle family Myrtaceae. It is an evergreen shrub native to Southern Europe, North Africa and West Asia. It is also distributed in South America, North western Himalaya and Australia and widespread in the Mediterranean region. It is one of the four species used by Jews in their religious rituals on the festival of Sukkot. Few of the popular common names of the plant are Foxtail Myrtle, Echte Myrte, Maile haole, Mirto, Mrca, Murta, Myrte, Periwinkle, Rihan, Tassie berry, Common Myrtle, True Myrtle, Sweet Myrtle, Roman Myrtle and Corsican pepper. Genus epithet ‘Myrtus’ is derived from Greek name for myrtle. Species epithet ‘communis’ means ‘common’ or ‘growing in groups’.

Leaves are either dried, almost like bay leaves for culinary applications, or the essential oil is extracted from a wide variety of medicinal uses. Also, the fruit is sometimes used to make alcohol, called mirto, commonly drunk on some of the Greek Isles. However, the most prevailing use of myrtle is the essential oil, which can be applied during aromatherapy and have impressive effects on your health. The essential oil smells similar to eucalyptus and is acquired through steam distillation of the leaves.

Myrtle is an aromatic evergreen perennial shrub or small tree that grows up to 8-12 ft. (243- 365 cm) all and 7-11 feet (240-360 cm) wide but this plant is usually kept smaller with pruning. The plant is found growing near wall side borders, shrub borders, hedges, city gardens, cottage gardens, Mediterranean garden or even containers. The plant succeeds in any reasonably good soil so long as it is well-drained. It prefers a moderately fertile well-drained neutral to alkaline loam soil. Stem is upright, 2.4-3 m tall, branched, thickly covered with evergreen leaves with deep fissured bark.

Leaves are glossy, glabrous, coriaceous, opposite, paired or whorled, ovate to lanceolate with stiff structure, aromatic, entire margined, acuminate and 2.5-3.8 cm long, glands are absent in the lamina. The leaves consist of valuable essential oils which are valued for both medicinal uses and culinary applications. Leaves are occasionally used as a substitute for bay leaves.

Axillary white flowers occur on slender peduncles; medium sized about 2 cm in diam., stiff having yellow anthers. The petals are pure white with glands and somewhat tomentose margin covered with fine hairs. They give off a sweet fragrant smell. Flowering normally takes place from July to august.

Flowers are followed by spherical, pea-sized, multi-seeded berries that are orbicular or ovoid-ellipsoid shaped. They are of varying sizes (0.7-1.2 cm) and shapes. The glabrous berry has rounded (vase like) shape with a swollen central part and remnants of persistent 4-5 partite calyx at the outer part. Fruits are initially pale green, then turn deep red and finally become dark indigo when fully mature. When fresh they are soft and aromatic. Beneath the blackish-blue skin the flesh is reddish-purple and is filled with small kidney-shaped seeds. The taste is a cross between Juniper and rosemary, with an initial aroma of pine and eucalyptus. The fresh berries have a somewhat bitter and tannic after-taste.

Berries are edible and may be eaten raw, but are at best moderately tasteful. Dried flowers, leaves and fruits are used to flavor foods. Fresh flowers may be added to salads. Wood and leaves are added to charcoal to flavor grilled meats.

This plant was well known and cultivated since antiquity, occupying a noticeable place in the writings of Greek, Roman, and Arabian writers. Following these authors, its ceremonial use was mentioned in the Bible and its medicinal properties quoted by Hippocrates. Theophrastus mentioned it among the cultivated plants, giving advices about its cultivation and describing its morphological characteristics, its fragrance, and its use in the confection of garlands. Dioscorides also mentioned a myriad of medicinal applications of myrtle, explaining, for example, how to prepare myrtle oil with the leaves for treating different skin diseases and how to elaborate myrtle wine with the fruits for digestive problems. Interestingly many of these remedies have been registered in recent ethno botanical surveys.

Alonso de Herrera, a Spanish author of the sixteenth century, mentioned the use of myrtle as a condiment, besides treating how to cultivate it and describing some of the medicinal properties already mentioned by Dioscorides. 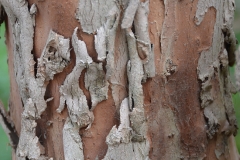 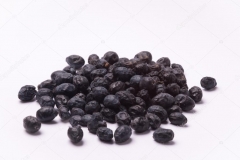 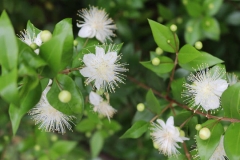 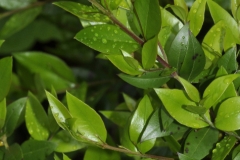 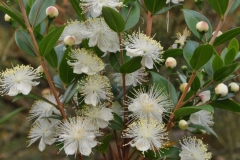 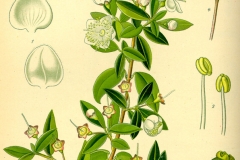 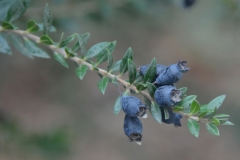 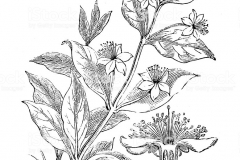 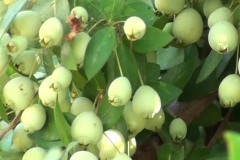 Myrtle is possibly most highly admired for its high levels of antioxidants, including quercetin, tannins, myricetin, and catechin. These antioxidants have been extensively researched and have been found to have anti-carcinogenic and anti-mutagenic properties. According to a research report in Natural Product Communications Journal, myrtle is quite similar in chemical composition to sandalwood, which has been associated to a reduction in prostate and breast cancer. Ongoing research is still discovering more potential applications in the field of cancer for myrtle. (1), (2)

Myrtle consists of various flavonoids including myricetin, that have been shown to reduce the oxidization of bad cholesterol (LDL cholesterol), which means that your cholesterol levels will remain balanced, your blood vessels and arteries won’t be blocked, atherosclerosis won’t occur, and your cardiovascular system will be protected from coronary heart disease and strokes.(3)

Myrtle can effectively clear up acne and other imperfections on the skin. It should topically be applied in its essential oil form, often in other carrier oil or in very limited concentrations. Organic compounds and powerful antioxidants in myrtle can help the cells heal quicker and improve the appearance of those affected areas. In its herb form, it can be consumed to see similar effects working from the inside out! (4)

One of the ancient applications of myrtle leaves was for the treatment of urinary tract or kidney issues. Myrtle can help to stimulate urination, thus eliminating excess toxins, salts, fluids, and even fat, thus helping to regulate the functions of your kidneys.(5)

Although Myrtle is still theoretically out on this health benefit, early research indicate that the volatile compounds and flavonoles in myrtle can help to reduce blood sugar plasma, which means that it would be able to help regulate blood sugar in the body. This would be a major boost for diabetic patients who need to monitor their blood glucose levels at all times.(6)

Extensive research has been carried out around the world regarding the effects of myrtle essential oil on the endocrine system, mainly in regulation of the thyroid gland.  It has been shown that myrtle essential oil, whether consumed or inhaled, can certainly affect the release of hormones, including those related to the ovaries and women’s reproductive health.(7)

Myricetin is one of the most important flavonoles that are found in myrtle. It has been found to prevent the formation of beta-amyloid fibril, which means that it is a very powerful aid for people suffering from Alzheimer’s and dementia. The therapeutic use of myrtle leaves and berries can keep your mind clear and prevent the degradation of neural pathways that lead to these terrible cognitive disorders. (8)

As mentioned, myrtle essential oil is very popular in aromatherapy and is commonly used to alleviate respiratory conditions, such as bronchitis and asthma.  It calms the respiratory tract and allows for clear passage of oxygen, while also calming the body, so breathing is slowed and irritation is removed. (9)

There has been a wide scope of research detailing the antibacterial and anti-parasitic nature of myrtle. For this reason, many people turn to this herb in order to boost the strength of their immune system.(10)

Traditional uses and benefits of Myrtle