Trending
You are at:Home»Herbs and Spices»Traditional uses and benefits of New Zealand Flax 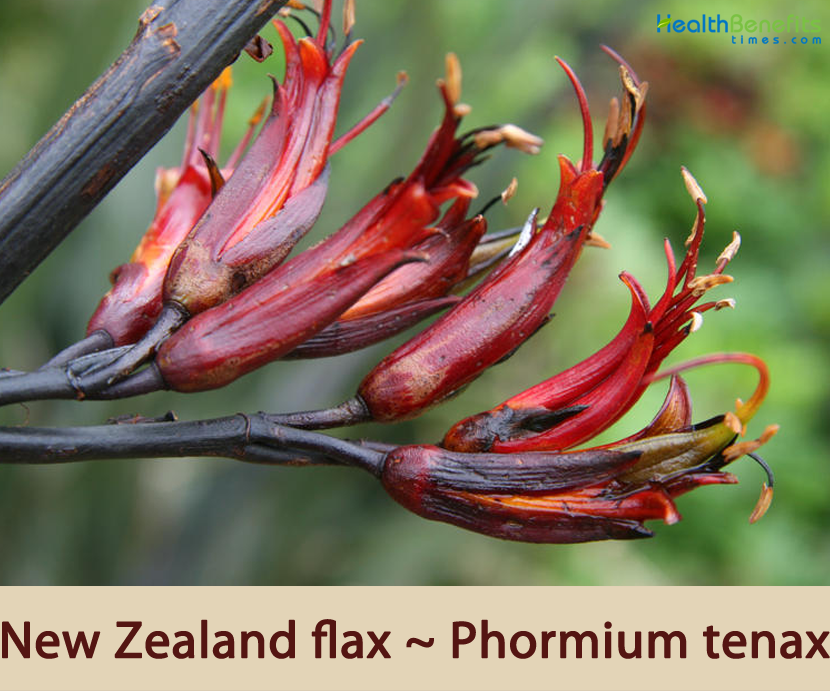 The New Zealand Flax scientifically known as Phormium tenax is a perennial, rhizomatous plant belongings to Agavaceae (Century-plant family). The plant is native to New Zealand and Norfolk Island. Several countries other than New Zealand have grown P. tenax as a commercial fiber crop, including Argentina, Chile, Brazil, Japan, St Helena, the Azores, South Africa and Kenya. In some of these countries and in parts of the United Kingdom and Ireland it is now naturalized. In some areas of South Africa, the Hawaiian Islands, St Helena and the Azores, it has become a weed. Some of the popular common names of the plants are New Zealand flax, New Zealand hemp, bush flax, Coastal Flax, lino de Nueva Zelanda, lirio de espada, Flax lily, Harakeke,  Harakeke lily, Harareke, Korari, St. Helena hemp, Swamp flax, common New Zealand flax and tough flax lily. Genus name comes from the Greek word phormion meaning mat as the Maoris used it to weave garments and baskets. Specific epithet means strong, tough or matted.

New Zealand flax is an evergreen hardy, clump forming, perennial rhizomatous plant that normally grows about 4 m (13 ft.) tall sometimes 5 to 6 m (16-20 ft.) along with its flowering shoots, but in cultivation and used as an ornamental it will rarely exceed the height of 2.50 m (8 ft).  The plant is found growing in lowland swamps, intermittently flooded land, coastal areas to montane forest, in wetlands, in open ground along riversides, ditches, roadsides, stream banks, brackish swamps, on dry wind swept hillsides, rainforest and freshwater wetland. It is found on a wide range of soils, but thrives on rich, well-drained soils. Before land clearance and drainage, it was found in abundance on moist alluvial soils near rivers and swamps.

The root system of Phormium tenax consists of fleshy and creeping (or extending in every soil subsurface direction) orange rhizomes, about 5 cm (2 in) in diameter, which are strongly branched, forming a dense network of white fine roots. Most of them are located in the upper soil layers, at a width of 1.50 m (5 ft) from the center of the plant and at a depth of 50 cm (20 in). However, the total area of the root system reaches as wide and deep as the height of the plant, i.e. 2.50 m (8 ft) or more.

Leaves are large, with a length ranging between 0.90 and 4.20 m (3-14 ft), while their width ranges between 5 and 12 cm (2-4.5 in). They have an elongated lanceolate shape and a green – bluish green color. They emerge from the rhizome, are distichous (located in opposite rows), smooth, thick, with entire margins, have strong bast fibers, and on their lower surfaces the midrib characteristically discerns.

They form clusters on every offshoot consisting of 8 to 30 leaves, of which the young grow from the center of the offshoots, while the older leaves on the outside die. Although the upper 1/2 or 1/3 of the leaves often curved outwards, many leaves remain erect. Such a structure serves, among other things, to avoid the direct effect of the sun’s rays, resulting in significant water savings. Thus it is possible for them to grow and develop in extremely dry places, such as those of rocky areas and sand dunes.

Flowers are placed on a panicle inflorescence, and number 500 to 700. They are hermaphrodite and protandrous – that is, the pollen is mature but the stigma has not yet become receptive for pollination. They have a tubular shape, and the color is primarily gray-red, but pink or yellow flowers are also found. Their length varies between 2.50 and 5.00 cm (1.2-2.4 in), while they are carried on a peduncle 8 to 10 mm (0.3-0.4 in) long.

They consist of 6 tepals, with the insides being slightly longer, and having slightly convex tips. Longer than the tepals are the 6 stamens, which emerge from the base of perianth. They have thin filaments, smooth and visibly flattened, on which the linear to elongated anthers are placed. The 3-locular ovary is superior, with numerous ovules, the style is filiform and the stigma of the pistil small and narrow. Phormium tenax takes 6 to 8 years to start flowering.

Fertile flowers are followed by loculicidally 3-valved capsule, initially fleshy and then woody in texture. Normally it remains for a long time in the plant, having first greenish-red color which at full maturity turns brownish black or black. It is triangular in cross section, erect, except for its top part, which shows at the apex an abruptly contract. Its length varies between 5 and 10 cm (2-4 in), and contains from 60 to 150 seeds.

Phormium tenax is indigenous to New Zealand and Norfolk Island. During the 19th Century it was introduced into many other countries, including Java where it is planted in gardens above 1200 m altitude. Today cultivars of P. tenax and the closely related P. cookianum Le Jolis are grown as ornamentals throughout the temperate regions of the world. Several countries other than New Zealand have grown P. tenax as a commercial fiber crop, including Argentina, Chile, Brazil, Japan, St Helena, the Azores, South Africa and Kenya. In some of these countries and in parts of the United Kingdom and Ireland it is now naturalized. In some areas of South Africa, the Hawaiian Islands, St Helena and the Azores, it has become a weed.

Eradication of P. tenax seems to have been largely successful on Nightingale and Inaccessible Islands of the Tristan da Cunha group. In 2004, an eradication program was started, using a combination of uprooting, cutting, crushing and spraying with herbicide. After the operation, established plants were confined to about 300 m of cliffs on Inaccessible Island, where the very steep terrain made access difficult. This attempted eradication was very labor intensive and probably expensive.

Plants can be dug out, although their roots occasionally penetrate deeply in good soils. Large plants can be winched or bulldozed out.

Most of the published work on herbicides for P. tenax refers to its tolerance to herbicides, because such work was based on the benefits of maintaining the plants for either their environmental benefits or value as a crop. McGruddy suggests that the tolerance of P. tenax to many commonly used herbicides can be seen as a virtue of the plant because it means that many such chemicals can be used to control weeds where the species is grown as a crop. She considers its tolerance to triclopyr herbicides being most important because such materials are commonly used for control of scrub weeds such as gorse and blackberry. P. tenax is, however, more sensitive to glyphosate although its precise tolerance has not been evaluated. If no wetting agent is used with glyphosate, plants are reported to be more tolerant. The species is apparently susceptible to metsulfuron-methyl based herbicides.

Harrington and Schmitz tested herbicides for their safety on species used in environmental restoration work in New Zealand and found that metsulfuron-methyl at 6 g a.i. /100 L of water caused more damage to the closely related P. colensoi than the other herbicides tested, which included amitrole (400 g a.i. /100L) and glyphosate (270 g a.i. /100L). The rate of glyphosate used in Ryan et al.’s (2012) eradication attempts was much higher (5%) and was applied to the bases of cut leaves.