Trending
You are at:Home»Fruits»Health benefits of Osage Orange 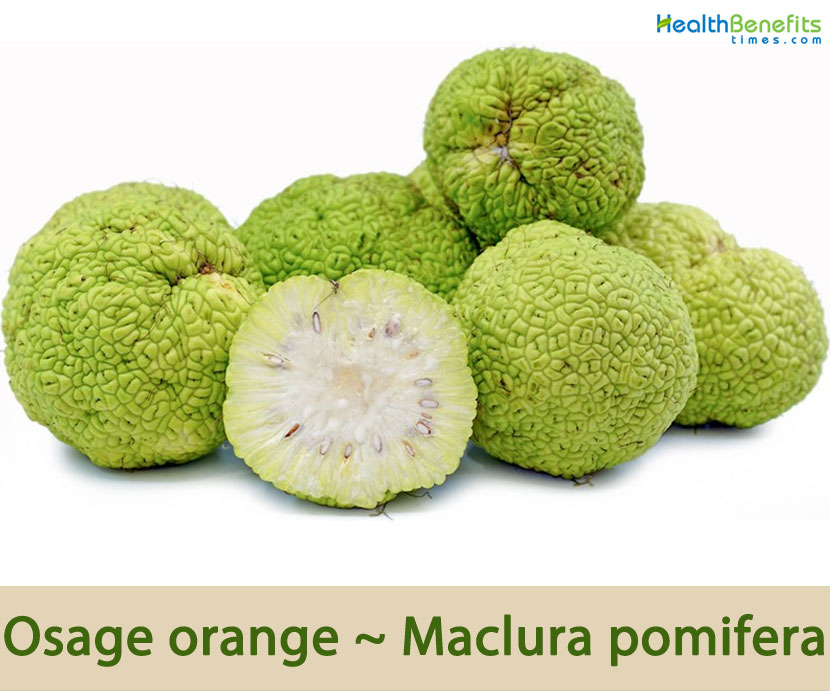 Maclura pomifera commonly known as Osage orange, horse apple or hedge apple tree is a small to medium-sized tree belonging to the Moraceae, or mulberry family. Other cultivated members of this family include the mulberry and fig. The plant is native to river valleys, rich bottomlands and narrow belt in eastern Texas, southeastern Oklahoma, southwestern Arkansas, and the extreme northwest corner of Louisiana, but has been extensively planted in a variety of environments throughout the United States, and has naturalized in many areas, mostly east of the Mississippi River. Some of the popular common names of the plant are hedge, hedge-apple, bodark, bois-d’arc, bowwood, naranjo chino, horse-apple, bow wood, hedge ball, maclura, mock orange, Osage orange, Osage-apple, tennis ball tree, bodock, fence shrub, hedge-orange, postwood, yellowwood, monkey ball and monkey brains.

The genus Maclura is named in honor of William Maclure (1763–1840), a Scottish-born American geologist. The species name, pomifera, refers to bearing pomes or apples, for the fruit. The common name Osage is derived from Osage Native Americans from whom young plants were first obtained, as told in the notes of Meriwether Lewis in 1804. The name Bodark is from the French bois d arc, meaning bow wood, referring to Native Americans’ use of the wood for archery bows. It is also used for fence posts. Early settlers extracted a yellow dye for cloth from the root bark. The fruit is eaten by livestock, which has given rise to yet another common name, Horse-apple. It is harvested from the wild for local use as a food, medicine and source of materials. Due to its latex secretions and woody pulp, the fruit is typically not eaten by humans and rarely by foraging animals, giving it distinction as an anachronistic “ghost of evolution”.

Osage-orange has a wide-spreading, opportunistic root system. Fibrous absorbing areas can be generated quickly to take advantage of resource availability. Root growth is fast. A well-developed juvenile tap-root is present. Many large, woody transport roots spread from the root crown. A high concentration of several protective materials (allelochems) is concentrated in the root bark. A tree in Oklahoma had roots more than 27 ft. (8.2 m) deep.

When viewed as a whole tree, Osage-orange has an open, rounded crown composed of thick, spreading, curved branches. Any sprouts present are long and slender. Marginal branches do not self-prune well and add to the coarseness and untidiness of the crown. Upon close inspection, twigs are buff to orange-brown, thick, stiff and smooth and have a zig-zag form with straight internodes between lateral buds and an aborted terminal bud.

It typically has a short trunk and a rounded or irregular crown. The stems exude a milky sap when cut. There is a sharp, straight, unbranched thorn (modified twig), ½ to 1 inch in length present in most leaf axils (petiole / leaf connection) on one year old twigs. Thorn length decreases toward twig tips. Marginal branches may not produce thorns at all. There are small, brown, round, lateral buds which appear partially embedded (sunken) in periderm to the side of each thorn.

Wood of Osage-orange is as unique as the rest of the tree. Heartwood is extremely decay resistant, dense, tough, and bright orange. It is the densest and most decay resistant wood in North America. Osage-orange is ring-porous. Osage-orange wood characteristics have provided for many local / folk uses. It is principally known for long effective-life fence posts when the bark is removed. Fence posts were traditionally cut from a hedge row or stand on a 15 year rotation, with sprouts regenerating the site. Any fruit generated were planted along fence rows every year to lengthen any living fence. Fence posts cut and immediately installed without bark removal can occasionally sprout and regenerate a root system.

Osage-orange is most visible as components of, or sole-species in, windbreaks and shelterbelts. It generates dense living barrier plantings and security fences, if maintained. Wood is still prized for specialty products such as hand-crafted archery bows, knife handles, and craft dyes extracted from the heartwood and root bark. Locally, wood is “chunked” for seasonal burning in coal-burning stoves. Wood density, toughness, and drying problems prevent most traditional lumber uses.

Leaves are deciduous, simple, and alternate or clustered at the ends of short spur-like twigs. Their shape ranges from broad-ovate to ovate lanceolate, rounded or sub-cordate at the base to broadly cuneate or acuminate at the apex. Leaves are 8 to 13 centimeters (3–5 in) with a long tapering and pointed tip and 5 to 8 centimeters (2–3 in) wide with a rounded leaf base and have entire margins. The plant has a 1.5 inch long, milky-sap-oozing, slender petiole connecting leaves to twigs. Leaf blades are dark shiny green, smooth and waxy above; paler green with a few hairs beneath. Autumn color is a translucent yellow.

As a dioecious plant, the inconspicuous pistillate (female) and staminate (male) flowers are found on different trees. Staminate flowers are pale green, small, and arranged in racemes borne on long, slender, drooping peduncles developed from the axils of crowded leaves on the spur-like branchlets of the previous year. They feature a hairy, four-lobed calyx; the four stamens are inserted opposite the lobes of calyx, on the margin of a thin disk. Pistillate flowers are borne in a dense spherical many-flowered head which appears on a short stout peduncle from the axils of the current year’s growth. Each flower has a hairy four-lobed calyx with thick, concave lobes that invest the ovary and enclose the fruit. Ovaries are superior, ovate, compressed, green, and crowned by a long slender style covered with white stigmatic hairs. The ovule is solitary. Flowering normally takes place in between April and June.

Fertile flowers are followed by a large, yellow-green orange, about 10 to 13 centimeters (4–5 in) in diameter, with a roughened and tuberculated surface. The compound fruit is a syncarp of numerous small drupes, in which the carpels (ovaries) have grown together; thus, it is classified a multiple-accessory fruit. Each small drupe is oblong, compressed and rounded; they consist of milky latex which oozes when the fruit is damaged or cut. Young green-colored fruit ripen and mature to a yellowish-colored mature fruit with a rubbery, bumpy rind. The rind is composed of exterior ends of individual seed sacks. Fruits average 450 grams (g) in weight, but range from 150 to 700g. The individual oval shaped seeds are imbedded in the fleshy calyx and are 8 to 12 millimeters (mm) long. Cleaned seed weight averaged 30,900/kg with a range of 15,400 to 35,300/kg. The seeds are initially cream colored, but turn brown with age and exposure to air.

Osage-orange trees are usually sexually mature by 8-12 years of age and fully productive as fruit bearers by 25 years of age. Maximum fruiting age is around 70 years. Female trees will produce fruit without the presence of a male tree, but no viable seeds will be present. Fruit is produced every year, ripens in September and falls to the ground. Although the flowering is dioecious, the pistillate tree when isolated will still bear large oranges, perfect to the sight but lacking the seeds. The fruit has a cucumber-like flavor. It looks like an orange and exudes a bitter milky juice when bruised. 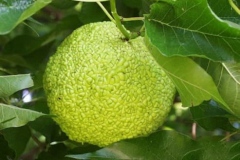 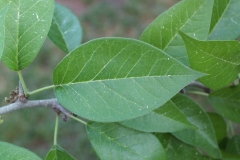 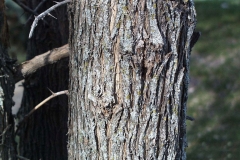 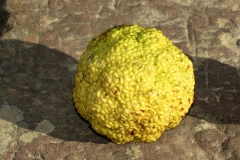 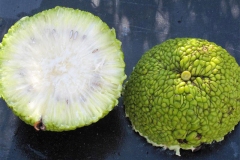 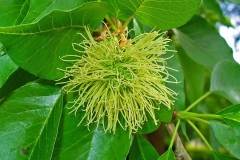 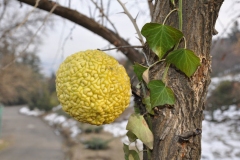 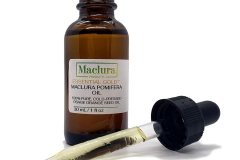 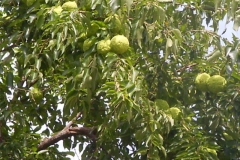 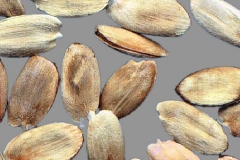 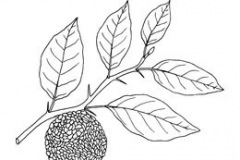 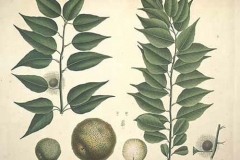 The benefits of Osage tree, or Maclura pomifera, are numerous, ranging from positive effects on the immune system and cardiovascular system. Listed below are some of the popular health benefits of using Osage orange in our daily lives

Research has shown that the Osage orange consists of powerful compounds responsible for fighting various types of fungus and bacteria. Research is ongoing to conclude how these compounds can be applied to human health. The main chemical compound that displays fungal and bacterial fighting abilities is 2, 3, 4, 5-tetrahydroxystilbene and is found primarily in the wood.

Heart disease is the number one killer among men and women alike, and researchers are scrambling to find solutions. Flavonoids found in the Osage orange– osajin and pomiferin – have been shown to promote heart function in animal tests; largely due to its antioxidant activity.

Many degenerative health concerns are amplified by oxidative stress – metabolic stress induced by diet and environmental toxins. Dietary antioxidants offer a great deal of promise for decreasing oxidative stress in the body and supporting overall health. The Osage tree consists of high levels of isoflavones, a type of antioxidant similar to vitamin C and E.

Immune system is the most important factor for supporting our health, providing a barrier against infectious and viral bacteria. Immune system can become compromised through stress, improper diet, and lack of exercise. Research shows that pomiferin, a natural antioxidant in the Osage tree, considerably boosts immune system function.

Unlike other trees, the Osage tree is normally free from pests, an allusion to its natural insecticide activity. Some limited initial research suggests concentrated compounds extracted from the fruit of the Osage tree may repel insects.

Traditional use and benefits of Osage orange