Trending
You are at:Home»Herbs and Spices»Health benefits of Osha Root 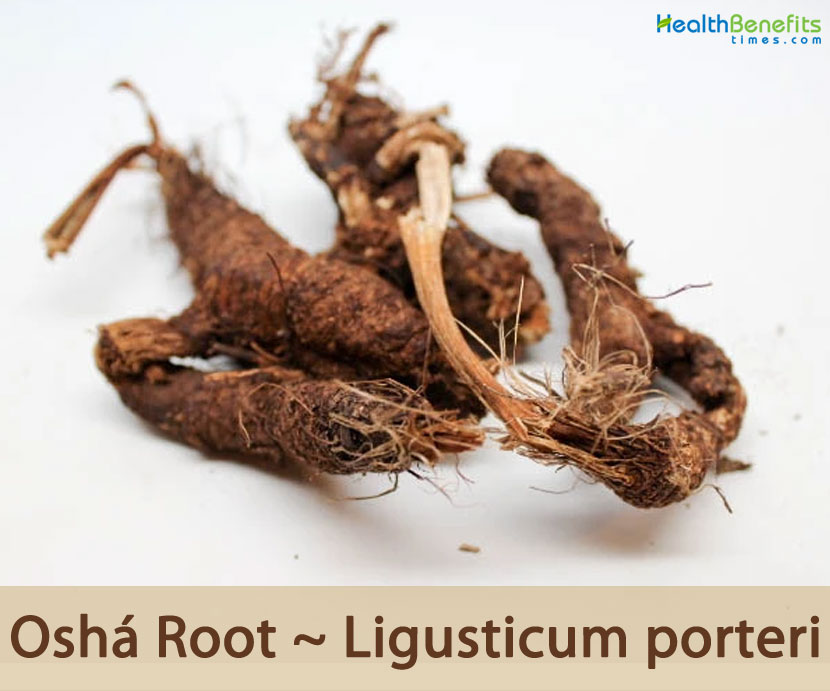 Ligusticum porteri, also known as oshá, is a perennial herb member of the carrot family (apiaceae), with parsley-like leaves and double umbels of white flowers. The plant is native to mountains of western North America from Wyoming (Arizona, Colorado, Idaho, New Mexico, Nevada, and Utah) to the states of Sonora and Chihuahua, Mexico and in the southwestern United States. It is most common in the upper limits of the subalpine zone, so in the southern part of its range, it grows at elevations from 7,000 feet to 10,000 feet (2100 m to 3000 m), while in Utah and Wyoming; it grows as low as 5,000 feet (1500 m). Porter’s lovage, Porter’s licorice-root, wild lovage, Porter’s wild lovage, loveroot, Porter’s ligusticum, bear medicine, bear root, Colorado cough root, Indian root, Indian parsley, wild parsley, mountain ginseng, mountain carrot, nipo, empress of the dark forest, chuchupate, chuchupati, chuchupaste, chuchupatle, guariaca, hierba del cochino or yerba de cochino, raíz del cochino, washí, mountain lovage, nipo and chuchupate are some of the popular common names of the plants.

The species name porteri honors the botanist and Christian clergyman Thomas Conrad Porter (1822–1901). Oshá has been said to mean “bear” in a Native American language. The original language is unknown. It is harvested from the wild for local use as a food and medicine. This plant has many uses in Native American medicine. The Zuni use an infusion of the root for body aches. The root is also chewed by the medicine man and patient during curing ceremonies for various illnesses, and the crushed root and water used as wash and taken for sore throat. The Rarámuri use the root for the common cold, fevers, stomach pains, flatulence, rheumatism, for bites of poisonous animals, to protect infants from disease, and to ward off snakes and harmful magic.

Oshá is slow-growing, herbaceous perennial plant that normally grows about 0.9 m (3ft) tall and 0.6 m (2 ft. in) wide. The plant is found growing in moist fertile ground, almost to the timberline, upland meadows, ravines, wooded habitats and on slopes and in meadows with drier, rocky soils. It is most commonly found in deep, moist soils rich in organic material. The plant requires partial shade. Oshá particularly resembles poison hemlock. Roots are fibrous, with a dark, chocolate-brown, wrinkled outer skin. When this skin is removed, the inner root tissue is fibrous and yellowish-white with an overpowering, pleasant spicy celery fragrance that resembles lovage.

Its roots are currently wild-harvested by individuals and herbal product companies for sale and use in treating influenza, bronchitis and sore throat. Oshá roots have a collar of dead leaf material surrounding the root crowns which is hair like in appearance. Roots are dry very quickly and are very astringent when fresh, and can cause blistering of the mouth and mucous membranes in humans if ingested fresh. The dried roots do not have this astringent effect. Roots of older plants are far stronger and bitter than those of younger plants

The plant has deeply incised, elliptic or lance-shaped leaf segments that are 5 to 40 mm in width with larger basal leaves. Oshá leaves have an intense fragrance when bruised and are typically larger than those of poison hemlock.

White flowers appear during late summer, and are approximately 2 to 5 mm in diameter with five petals. They are grouped in flat-topped, compound umbels. Flowering normally takes place in between May and August.

Fertile flowers are followed by reddish, oblong, ribbed fruits that are 5 to 8 mm in length.

Different People and their Medicinal Uses 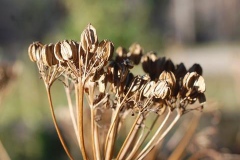 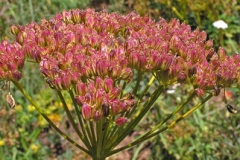 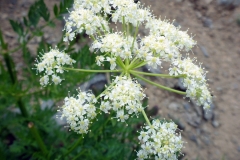 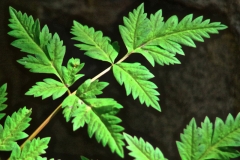 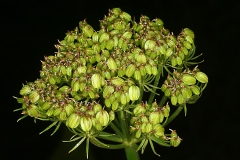 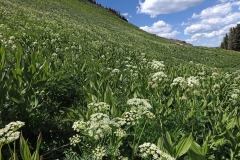 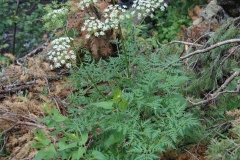 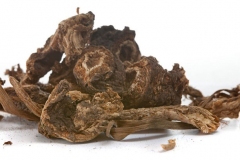 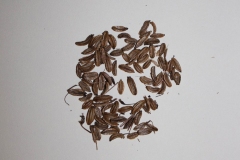 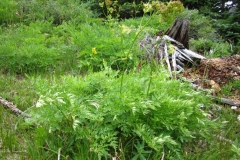 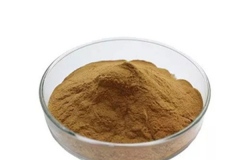 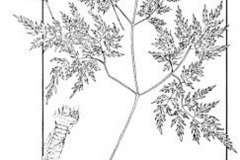 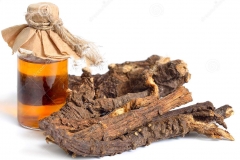 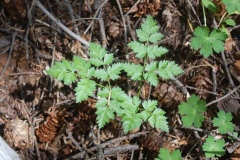 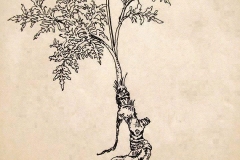 Native Americans of North America often observed that bears would look for osha and consume the plant roots directly after emerging from winter hibernation or when wounded or sick. Osha is a Native American word for bear and is referred to as Bear Medicine, since the plants are eaten by bears for what appear to be medicinal purposes. Listed below are some of the popular health benefits of using osha root

Osha root is occasionally used to prevent infections because it is supposed to have antibacterial and antiviral properties. It has been applied directly to wounds to prevent infections and help with healing. While some researchers have found that extracts of osha root can inhibit bacteria, more studies are needed to prove its effectiveness in this regard.

The natural herbal plant has powerful antifungal, antiviral, anti-inflammatory and anti-bacterial properties that can ease numerous respiratory disorders like flu, colds, coughs and tonsillitis. The herbal remedy is often recommended whenever earlier signals of common flu or cold are noticed. When sucked as a lozenge or when directly chewed, the natural herbal remedy can be used to cure a stubborn sore throat or to induce a productive cough.

Osha root’s highly beneficial properties make it a powerful cough remedy, particularly when mixed with honey. Osha root also increases blood circulation to the lungs, which increases dilation during constriction. For this reason, it is of particular interest as a support mechanism for certain lung conditions, asthma, and allergies. It is believed the increased blood oxygenation is facilitated by an increase in gas exchange through the alveoli in the lungs. In simpler terms, osha root helps one to take deeper breaths.

Oxidative stress is caused by an imbalance of free radicals and antioxidants and can result in illness and disease. In a research, researchers extracted human peripheral lymphocytes and incubated them with different concentrations of osha root extract. They measured the protective effect of osha against oxidative damage by inducing oxidative stress.

They found that at the highest doses, 400 micrograms per meter (μg/m), osha might be a potential immune-modulating agent, perhaps providing protective effects against oxidative damage.

Osha root is commonly used as a natural therapy for cold and flu symptoms. Though osha root doesn’t have a direct anti-histamine action, its effect is similar, and using osha root during a histamine flare up can lessen indications of head colds and respiratory ailments. One of the most notable benefits of osha root is its numbing effect, used to help soothe the irritated tissue of a sore throat. It has been used as an ingredient in cough drops and lozenges and can even be made into a cough syrup that is more effective than Echinacea and goldenseal, two other common herbal cough remedies.

Osha root tea has been scientifically proven to be an effective natural remedy for alleviating different digestive related issues. You can drink the powerful herbal infusion if you wish to treat indigestion, gastrointestinal discomfort, vomiting, stomach upset or nausea. Osha root not only soothe the digestive tract but also stimulate appetite. It was widely used by Native Americans for its potent ability to alleviate stomach upset and indigestion.

Osha can easily be used as a reliable replacement for prescribed pharmaceutical painkillers. The herbal remedy which also acts as a mild anesthetic can be applied on the affected area as it provides a natural numbing effect. The natural painkiller has been found to be particularly effective in relieving headaches, body aches, toothaches, and painful menstruation. Osha root extracts can also be combined with alcohol to create a potent topical remedy for all types of body pains.

Natural herbal remedy has powerful anti-venom properties that offer it with the incredible ability to nullify, mollify and even alter a wide variety of highly poisonous substances. This makes the herbal plant a nice treatment option for Hymenoptera, spiders and snakes. However, it is crucial to ask for the help of a qualified doctor if the effects of the poisonous substance only tend to worsen instead of becoming better.

Osha root can be taken to treat fevers, particularly those that never seem to go away. The natural herbal remedy has amazing ability to considerably elevate body temperatures and increase sweating hence getting rid of potentially harmful toxic substances through the skin pores.

Osha herbal infusion can also be taken to prevent the gradual development of a full-blown flu or cold virus. Taking either a decoction of the natural herbal remedy or chewing its root directly accelerates the body’s perspiration process hence boosting overall body’s immune function.