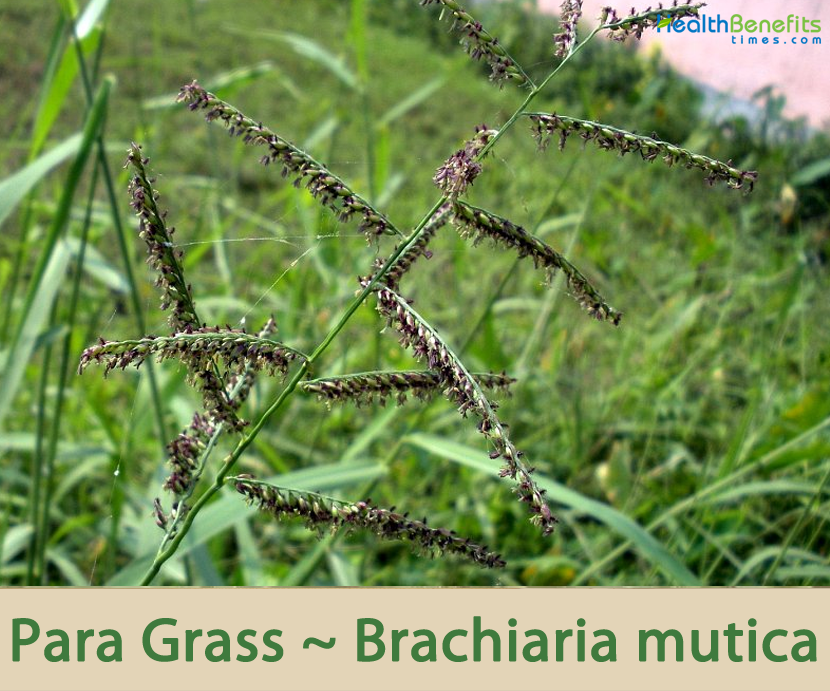 Para grass was first described as Panicum muticum by Forsskal in 1775. It was moved to Brachiaria in 1919 by Otto Stapf, keeper of the Kew Herbarium. The current combination Urochloa mutica was published in 1966. It was introduced into Queensland around 1880 to reduce soil erosion along the banks of waterways. Since then, it has spread over most of its potential range, assisted by deliberate cultivation as a ‘ponded pasture’ grass. Para grass can be grazed, used in cut-and-carry systems or made into hay or silage. It can be used for erosion control on river banks and steep slopes.

Para grass is a perennial grass widely naturalized in tropical and subtropical regions of the world where it was introduced as a fodder grass. Now, this species is considered one of the world’s worst weeds in the United States, Australia, Mexico, and Central America. It is listed as a weed in at least 34 countries and is recognized as a ‘serious’ problem in Fiji, Thailand, Sri Lanka, Colombia, Hawaii, Jamaica, Malaysia, Peru, the Philippines, Puerto Rico and Trinidad. It is a significant pest in Kakadu National Park where it dominates considerable areas of tropical floodplain and affects native birdlife. In North Queensland, it blocks irrigation ditches designed to drain sugar cane crops and intensifies sedimentation problems in creeks. Dispersal is generally via broken stem fragments, which are carried downstream, but to a lesser extent from seeds.

Paragrass is a long lived, vigorous, perennial, semi-aquatic, palatable and good quality forage grass with an upright habit, and also produce runners that normally grows up to 5 meters (16 ft.) tall. The plant is found growing in poorly drained, swampy or seasonally waterlogged areas, along creeks, rivers, floodplains, wetlands and drainage channels, around lakes and dams, in roadside ditches and in other damp habitats, coastal berms, hardwood hammocks, mesic and wet flat woods, bottomland forests, floodplain forests, stream and spring shores, and ruderal communities, wetlands, ponds, and along rivers, creeks and lakes. The plant prefers alluvial and hydromorphic soils, it does well on a wide range of soils: from sands to clays with moderate to good fertility. Para grass is both suited to poorly drain swampy areas and well drained moist soils. Para grass does well on acidic soils or containing high contents of trace elements. It has moderate tolerance to soil salinity. It can grow on alkaline reclaimed soils.

Leaves consist of a sheath that encloses the stem and a spreading leaf blade. Leaf sheaths are sparsely to densely hairy (i.e. puberulent to densely pubescent), and these hairs usually have a wart-like swelling at their bases (i.e. tuberculose hairs). Where the leaf sheath meets the leaf blade there is a line of hairs (i.e. a ciliated ligule) about 1.5 mm long or a tiny membranous flap topped with hairs (i.e. a ciliated membrane). Leaves blades are very narrow (i.e. linear) with entire margins and gradually narrow to a pointed tip (i.e. acute apex). These leaf blades are 15-30 cm long and 3-20 mm wide and can be either hairless (i.e. glabrous) or somewhat hairy (i.e. pubescent).

The seed-heads (i.e. inflorescences) consist of 5-20 branchlets (i.e. racemes), each bearing numerous flower spikelets. These seed-head branches are 2-13 cm long and are borne along the top 7-30 cm of the flowering stem and they gradually become reduced in size towards the top of the seed-head. The seed-head branches (i.e. racemes) are occasionally also slightly branched, with the secondary branches each carrying 3-6 flower spikelets, and this sometimes give the seed-head the appearance of an open panicle. Individual flower spikelets are 2.5-3.5 mm long and are oval (i.e. elliptic) in shape and mostly hairless (i.e. glabrous). They consist of two greenish or purplish bracts (i.e. glumes) and two tiny flowers (i.e. florets). The lower floret only has male parts, while the upper floret has both male and female parts and produces the seed (i.e. it is fertile). Each floret has two pale green or whitish bracts (i.e. a palea and a lemma) and three purplish or blackish stamens, and the fertile floret also has an ovary topped with a feathery two-branched stigma. It flowers sporadically throughout the year, but mostly during summer and autumn (i.e. from November to May). 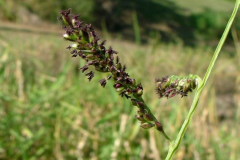 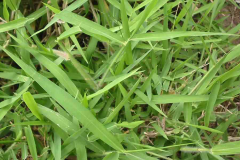 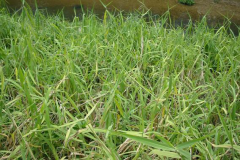 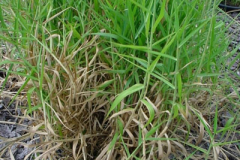 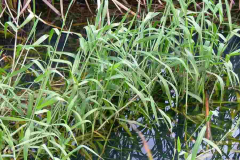 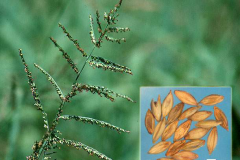 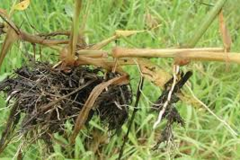 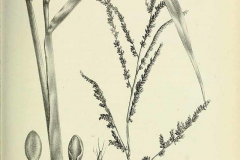 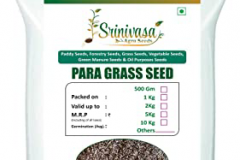 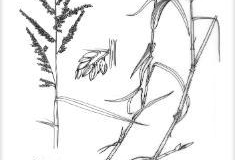 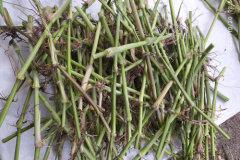 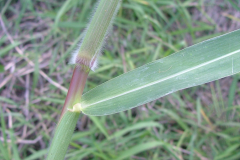 Control of para grass is difficult by the ability of plants to sprout following top-kill. Repeated treatments may be necessary to control para grass.

In all cases where invasive species are targeted for control, no matter what method is used, the potential for other invasive species to fill their void must be considered. Control of biotic invasions is most effective when it employs a long-term, ecosystem-wide strategy rather than a tactical approach focused on battling individual invaders.

It is commonly argued that the most cost-efficient and effective method of managing invasive species is to prevent their establishment and spread by maintaining “healthy” natural communities (e.g., avoid road building in wild lands) and by monitoring several times each year. Managing to maintain the integrity of the native plant community and alleviate the factors enhancing ecosystem invisibility is likely to be more effective than managing solely to control the invader.

Weed prevention and control can be incorporated into many types of management plans, including those for logging and site preparation, grazing allotments, recreation management, research projects, road building and maintenance, and fire management. See the Guide to noxious weed prevention practices for specific guidelines in preventing the spread of weed seeds and propagules under different management conditions.

A manager in the Lake Okeechobee region of Florida reported that small populations of para grass may be controlled with repeated disking. A manager from the Archbold Biological Station, Florida noted that disking resulted in a reduction in para grass cover, but plants sprouted following treatment. A weed guide suggests that small populations may be controlled manually or with mechanical harvesters. In field experiments in Australia, shading (50% and 90% shade) for 3 months reduced the height and standing biomass of para grass compared to plots with no shade. Treatments of 90% shade resulted in a 63% mean reduction in height and a 52% mean reduction in total biomass. A weed guide reports that para grass does not tolerate continued grazing and trampling by livestock.

One source reports that using mechanical methods to control para grass is costly and not effective in the long term.

Herbicides may be effective in controlling para grass, though its presence in aquatic areas may present challenges to chemical control programs. One source reports that para grass may be resistant to some herbicides or herbicides may take as long as 3 months to kill root systems. A manager in Florida observed that herbicide treatments temporarily reduced the cover of para grass, but sprouting occurred following treatments. Glyphosate application was more effective at controlling para grass than burning and disking, but herbicide treatments had to be repeated.

If para grass occurs adjacent to areas treated with herbicides, it may spread into treated areas if it is not monitored and controlled. Herbicide use in some cropping systems has led to an increase in para grass density because it replaced other plants that were more susceptible to chemical treatment.