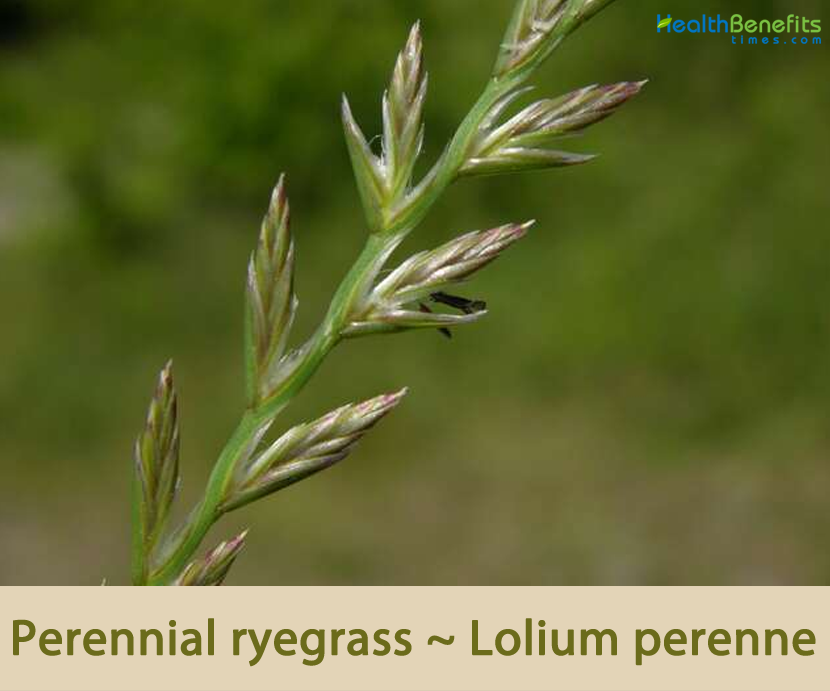 Genus name is the classical Latin name for a species of rye-grass. Specific epithet means perennial. ‘Manhattan’ is considered to be finer and more uniform than the species. It’s hardy, tough, quick to germinate, and stands up well to a lot of use. For these reasons, most general purpose or utility lawn seed mixes and turf contain a high proportion of perennial ryegrass, along with other grasses. The exception is ‘fine’ or ‘bowling green’ type lawns, both due to leaf size and because perennial ryegrass doesn’t thrive if regularly mown very short. It is regarded as an environmental weed in New South Wales, Victoria and Western Australia. This species is grown as a pasture grass and is also intentionally planted in recreation areas in the temperate regions of Australia. It often becomes naturalized in agricultural areas, along roadsides and near habitation, but also invades a wide variety of natural habitats.

Flowering stems (culms) are comprised of nodes and internodes, each node bearing a leaf. Culms are 12 to 40 inches in height (30 to100 cm) depending on variety, moisture, and site conditions. The uppermost culm segment is called the peduncle, the structure that supports the flowering parts. The stem base commonly is reddish.

Leaves of perennial ryegrass are folded lengthwise in the bud (in contrast to those of annual ryegrass, which are rolled). Leaf blades are 0.08 to 0.25 inches wide (2 to 6 mm) and 2 to 6 inches long (5 to 15 cm). They are sharply taper-pointed and keeled. Blades are bright green. They are prominently ridged on the upper surface. Lower surfaces are dark green, smooth, glossy, and hairless. Leaf margins are slightly rough to the touch. Blades increase in size from the first to the seventh leaf on a tiller, although tillers rarely have more than three live leaves at one time. Leaf sheaths usually are not keeled. They are compressed but some-times almost cylindrical. Sheaths are hairless, pale green and reddish at the base. They may be closed or split. 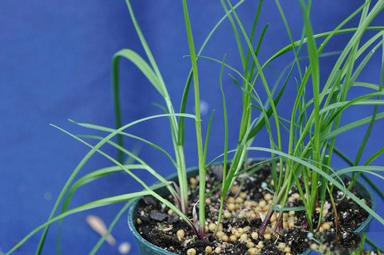 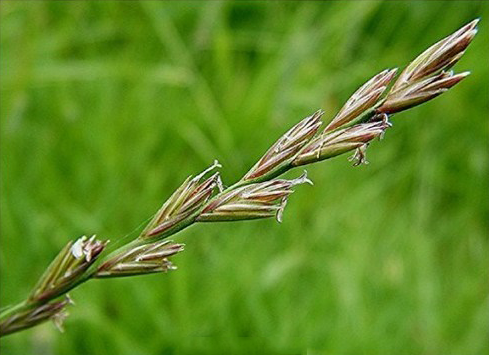 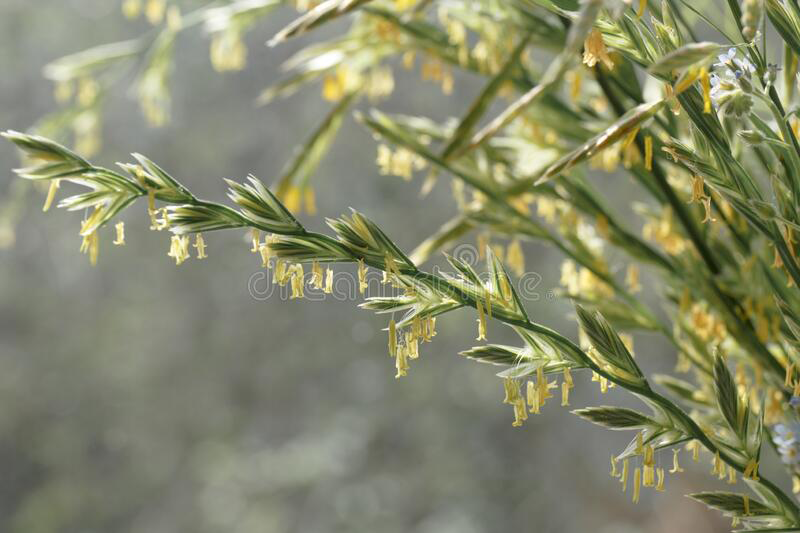 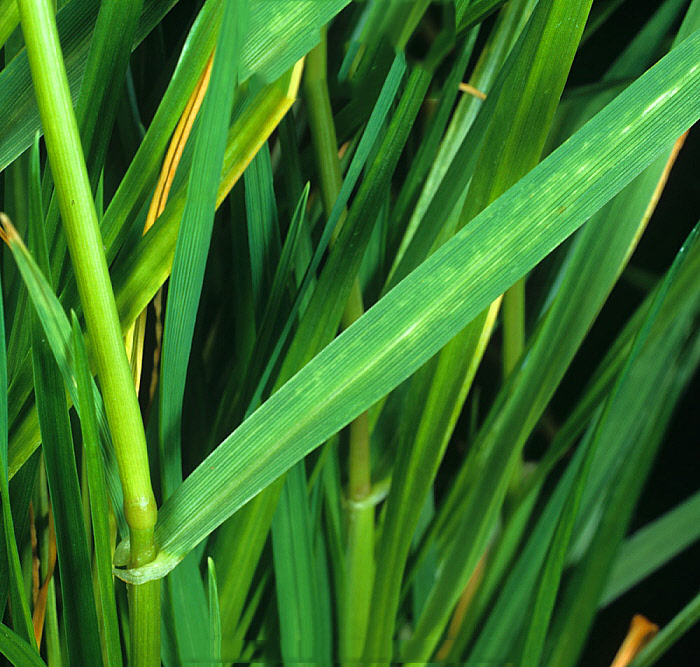 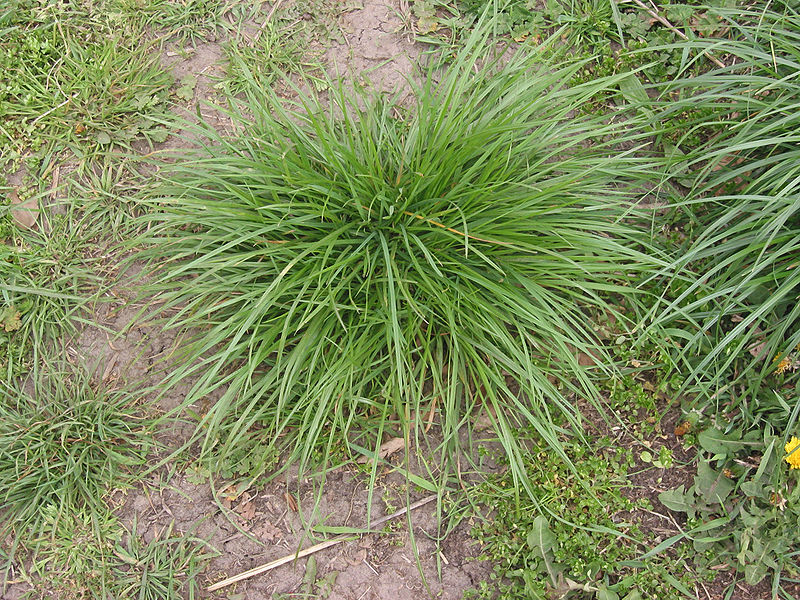 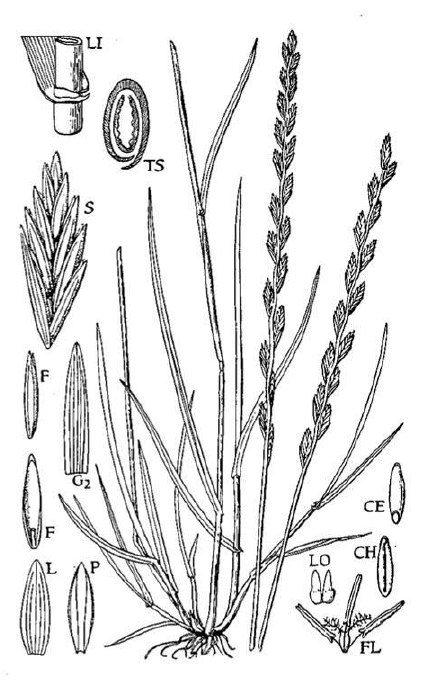 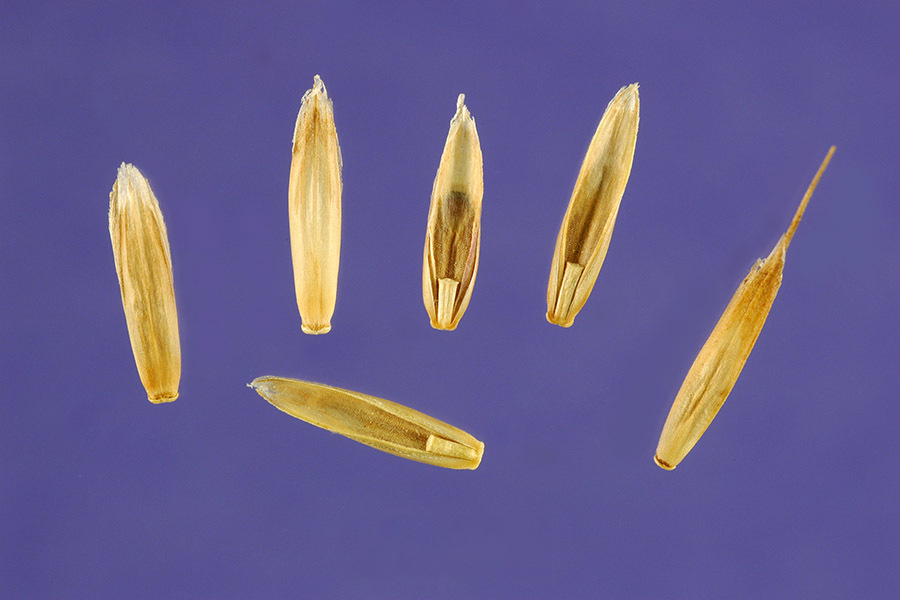 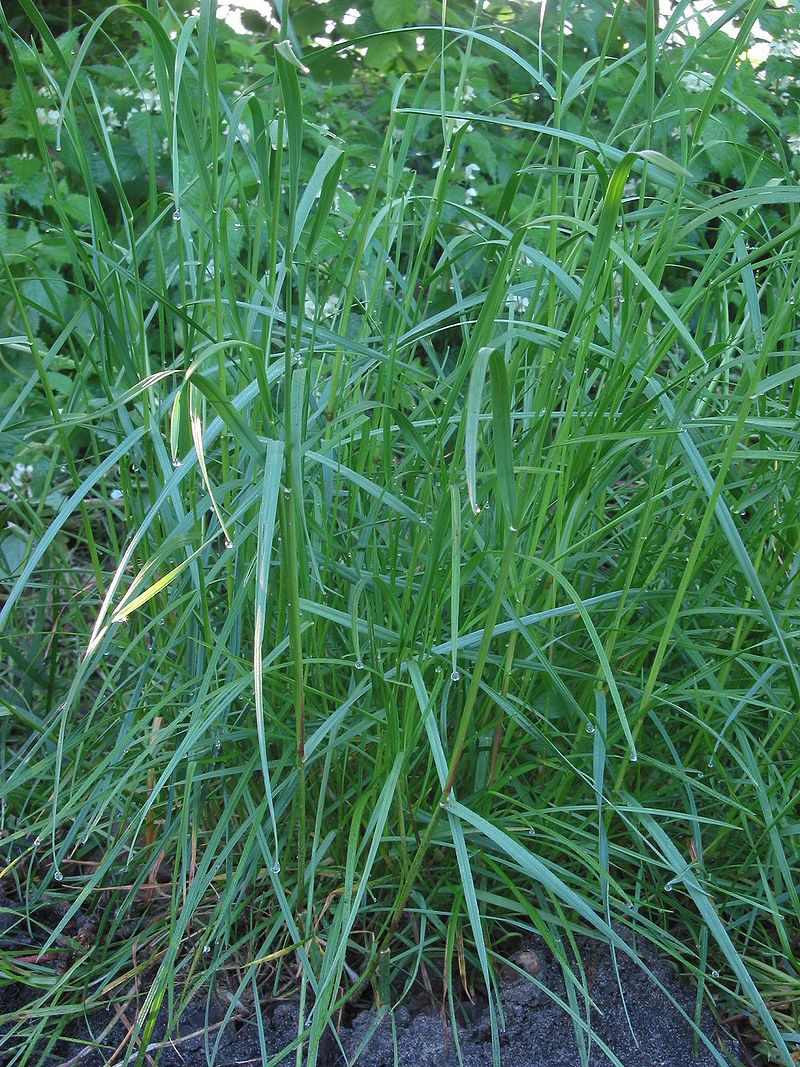 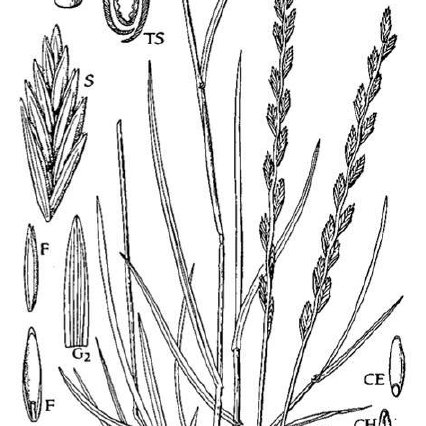 Each fertile culm terminates in a flowering spike about 4-10 inches long. This spike consists of several sessile spikelets that alternate along two sides of the rachis (central stalk of the spike). The rachis is slightly indented where each spikelet occurs, providing it with a curvilinear zigzag appearance. Each non-terminal spikelet is 8-16 mm. in length, consisting of a single outer glume at its base and 4-10 lemmas that are arranged in 2 overlapping ranks. The lemmas are 4-7 mm. in length, oblong in shape, convex along their outer surfaces, longitudinally veined, and hairless. The floret of each fertile lemma consists of an ovary, a pair of feathery stigmata, and 3 stamens. The outer glume is longer than individual lemmas, but shorter than the spikelet. Aside from its greater length, the glume is similar in appearance to the lemmas. Terminal spikelets are the same as non-terminal spikelets, except they have 2 glumes; these glumes are similar to the outer glumes of the non-terminal spikelets. As the spikelets mature, they change in color from light green to light tan. The blooming period typically occurs during early summer, although this may be delayed by disturbance.

The florets are cross-pollinated by the wind. Afterwards, the florets of fertile lemmas are replaced by grains. At maturity, these grains are 3-5.5 mm. long and 0.7 to 1.5 mm wide, narrowly oblongoid in shape, narrowly grooved along one side, and light tan. Disarticulation of the spikelets is above the glumes. There are approximately 247,000 seeds per pound.

Perennial ryegrass belongs to a group of perennial grasses that are very difficult to control with flaming. Rask et al. (2011) explored the use of flame weeding for control of a well-established dense stand of L. perenne ‘Maurice’ in Denmark. They showed that full control can be achieved with flaming, but it depends on the number of treatments as well as the dose of propane. At mean doses above 80 kg propane ha-1 with treatments carried out every second week for a year all weeds were completely killed and no regrowth was seen in the following two weeks.

On a small scale, such as in a garden, perennial ryegrass can be controlled by pulling (if the ground is soft) or by digging. On a larger scale, ploughing by turning the sod or rotary hoeing is often the standard method of destroying a perennial ryegrass crop, occasionally with the purpose of renewing the pasture with newer or more appropriate cultivars of the same species.

Perennial ryegrass is ideally suited for biological control as there are a large number of insect pests and diseases that can damage or even kill the grass. However, being an extremely valuable and desirable pasture and turf species, biological control is unlikely to be used.

Treatment of isolated individual plants and of very large areas of perennial ryegrass with glyphosate has been a widely established agricultural practice for many years now. Initial problems with temporary spring-time resistance to the herbicide were overcome with the addition of appropriate surfactants to the herbicide.

DiTomaso et al. suggest the following herbicides for control of Perennial ryegrass in the western USA: aminocyclopyrachlor and chlorsulfuron, clethodim, fluazifop, hexazinone, imazapic, imazapyr, sethoxydim, sulfometuron, as well as glyphosate. Some of these are selective, killing grasses and not broad-leaf plants; others will kill most plants.

Overgrazing of Perennial ryegrass, especially when it is under stress, such as in a dry summer will lead to death of many of the plants and possibly their replacement by other, often weedy grass and herb species.

Herbs and Spices P
Share. Twitter Facebook Google+ Pinterest LinkedIn Tumblr Email
Previous ArticleEverything You Should Know: Alpha-Linolenic Acid in Your Diet
Next Article The Ultimate Beginner’s Guide to Getting Fit from Your Own Home