The plank exercise is very universal: it helps to make the waist thin, the stomach flat, and the back straight. And in just a few minutes a day! 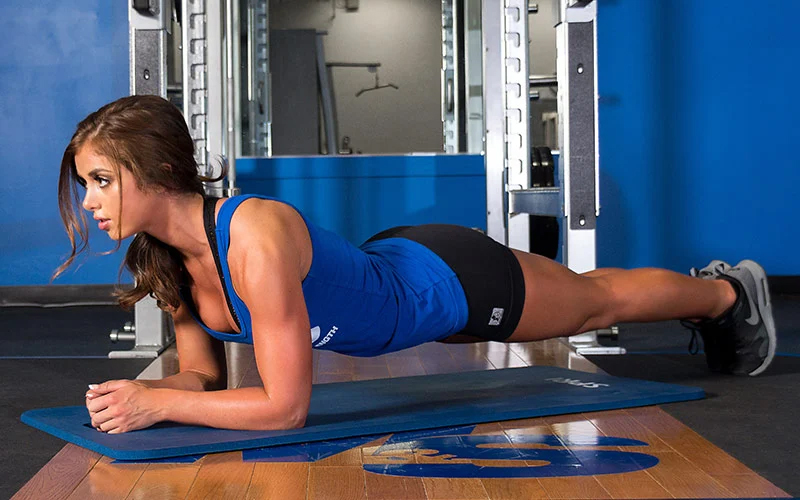 The plank (emphasis on arms and legs) is very popular and in various variations is found in almost all types of fitness. This is not a new invention: it was part of the training plan of Roman gladiators and ancient Greek athletes, it is actively used in yoga. Now the statement is popular that it is enough to perform this exercise alone to work out all the muscles of the body. Of course, this is too good to be true. But the plank really helps to put the figure in order.

The Benefits of Forearm Plank

Plank Muscles Worked: Do Planks Help Get a Flat Stomach?

90% of the muscles of the body are involved in the plank:

The plank is a static exercise, that is, you take one position and hold it for a certain amount of time. Advantages of statics: it is safe, works well with small and deep muscles. But to those who love dynamics, it may seem boring. In order not to sour and not discourage you to train, try transitions from one type of plank to another.

Types Of Planks: Planks for Beginners and Experienced Athletes

Performed as a stand on the forearms and toes. The palms are clenched into fists, elbows shoulder-width apart and under the shoulders. The forearms are parallel to each other, the back and lower back are on the same line, the stomach is pulled in and tense, the buttocks are also tense, the knees are straightened and connected, resting on the socks. It looks simple, but for beginners, muscles begin to tremble almost immediately.

To make it a little easier, you can put socks wider. To start, hold the plank for 10-15 seconds, try to do it several times a day. Gradually increase the time by 5-10 seconds and bring to 3 minutes without a break. Then you can try other options.

It is done almost like a classic, only the support is not on the forearm, but on the palm or fists. In this position, the hands and wrist joint are additionally loaded, the load on the abs and back is increased.

Obtained from the previous one: performed on bent hands, stand still on the hands and socks. The load on the triceps (the back surface of the arms), shoulders, and pectoral muscles is increasing.

4. A plank with a raised hand

It is made both from a classic fitness plank, and from the plank on your hands. You simply extend as an extension of the body the arm or leg (or both the arm and leg at the same time). A raised limb increases the load on your partner, abs and back. Raised legs also add stress to the buttocks.

It is recommended to start with 5-10 seconds in this position. Be sure to take turns to raise both hands, or both legs, or both diagonals. If you really want to try, but you don’t have enough strength, stand not on socks, but on your knees, while your knees should be located under the buttocks.

It involves a side stand with support on a straight or bent arm and foot. The second foot is located on the floor in front of the supporting foot or lies on the lower foot, and the second hand on the belt or is lifted vertically upward. It is important to maintain a straight line of the body – legs and retract the stomach. We want to recommend you awesome fitness blog bodypass.net – here you can find all the training plans and exercises you need to get a perfect body! Such a plank intensively works out the abs, back, and hips with buttocks and is especially useful for those who feel a plateau in losing weight.

An analog of the plank on the hands only performed with the back to the floor. You rely on your palms and heels, respectively. It is especially good for correcting stoop, stretching the spine, and getting a flat stomach.

The plank is contraindicated in any inflammatory processes of internal organs (including endometriosis), myoma, cyst, stomach ulcers. And of course, during pregnancy. With caution, you should do the plank with varicose veins and high blood pressure. In this case, it is recommended to alternate it with dynamic exercises (walking, cycling, swimming).