Trending
You are at:Home»Foods»Popcorn Health Benefits 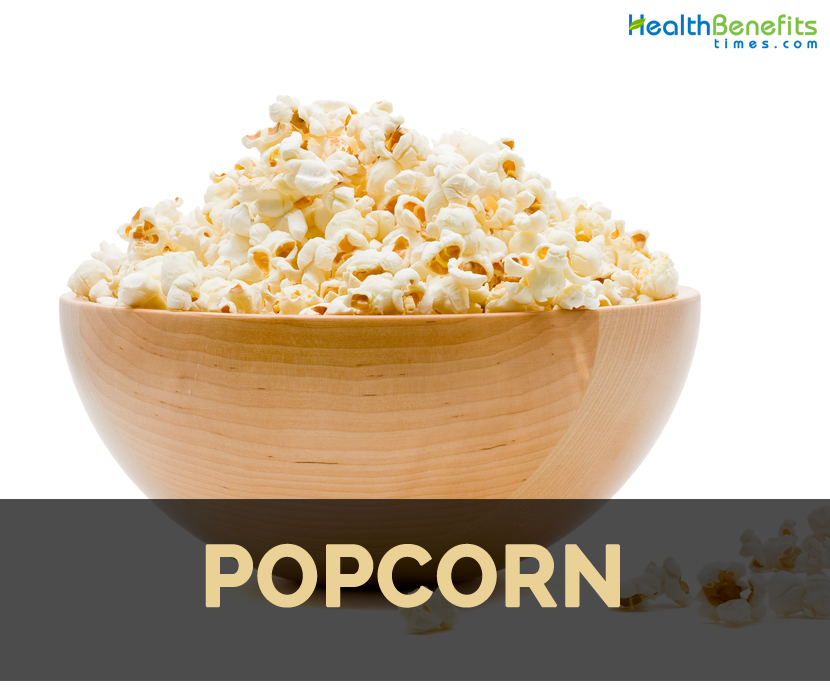 Scientifically known as Zea Mays Everta, popcorn is variety of corn kernel that puffs up or expands when heated. The hull of popcorn kernel contains hard and starchy endosperm having 14 to 20 percentage of moisture that converts steam when the kernel is heated. As the pressure from the steam carries on, the hull ruptures that allows kernel to expand forcefully from 20 to 50 times of its original size. Some corn strains are especially cultivated as popping corns. Corn is of six major types: flint corn, dent corn, popcorn, pod corn, sweet corn and flour corn. It resembles corn-on-the-cob. The seeds of popcorn are bred selectively for producing desirable results such as high popping success and favorable grain color.

Firstly, corn was domesticated 10,000 years ago in Mexico. It is discovered that popcorn was known to human for thousands of years. The residue of popcorn was found to be dated around 3600 BCE in Mexico.

During 19th century, the popping of kernels was obtained by hand on stovetop. The kernels were sold under the name of Nonpareil or Pearls on the East Coast of United States. The word popped firstly appeared in Dictionary of Americanisms in 1848 of John Russell Bartlett.

The popcorn machine was invented by Charles Cretors in 1880s in Chicago. In 1890s, with the invention of popcorn maker, the accessibility of popcorn rapidly increased. A Chicago candy store owner, Cretors, made a number of steam powered machine to roast nuts and also applied technology to corn kernels. In the century, Creators made street carts equipped with steam powdered popcorn makers.

At the time of Great Depression, the price of popcorn was reasonable (5 to 10 cents a bag) and became quite popular. When the other businesses failed but the business of popcorn thrived and became an income source for struggling farmers. The sugar rations lowered the production of candy during World War II and then the Americans refunded by consuming three times much popcorn they had before. It was then became popular at theaters much to the displeasure to the theater owners who had a view that it distracted from films but eventually their minds changed. In 1938, Glen W. Dickson, a Midwestern theater owner installed popcorn machines in lobbies of his theaters. It got financial success and from there the trend spread soon.

Orville Redenbacher’s namesake brand of popcorn got launched in 1970. General Mills got first patent for the microwave popcorn bag in 1981 by considering the increase in popcorn consumption following tens of thousands of pounds in years.

Popcorn is a whole grain that contains germ, endosperm and bran. Similar to whole grain cereals, bread and rice, it also possess these three main parts. Being a natural whole grain, it comprises of fiber, Vitamin E, B complex vitamins and minerals. High content of fiber supports digestion by keeping the bowel movements regular, smooth and fast through digestive tract. It assists to prevent digestive conditions such as constipation. It also stimulates peristaltic motion of smooth intestinal muscles and promotes digestive juice secretion that maintains healthy digestive system.

Fiber is beneficial for the body and whole grains possess fiber that could eliminate excess cholesterol from the walls of blood vessels and arteries by lowering the overall level of cholesterol and also reducing the risk of harmful cardiovascular conditions such as heart attacks, atherosclerosis and strokes. It decreases the strain on cardiac system and the heart does not have to work hard for moving blood through clogged vessels as well as arteries.

Fiber has a good impact on blood sugar. When the body holds adequate amounts of fiber, it regulates release as well as manages blood sugar and the level of insulin more effectively than people with low fiber. The lower chances of blood sugar fluctuations are helpful for diabetic patients and popcorn is preferable for the people with this disease.

The research that has been conducted recently resulted that popcorn contains ample amount of antioxidants. It is regarded to be unhealthy junk food but now it has been stated that the popcorn’s hull encloses high polyphenolic compounds which is a powerful antioxidant. Antioxidants eliminate and scavenge free radicals which are associated with various ailments in the body such as cancer. Free radicals are responsible for mutation of healthy DNA cells in cancerous cells. The consumption of popcorn helps to lower these risks.

Besides cancer, free radicals are associated with the age related symptoms such as age spots, wrinkles, blindness, macular degeneration, cognitive decline, muscle weakness, dementia, Alzheimer’s disease, osteoporosis, hair loss and others. As popcorn contains powerful antioxidants, it keeps one healthy as well as happy by counteracting the free radical effects.

A cup of popped popcorn offers 30 calories which is five times less in comparison to greasy potato chips. Moreover, popcorn has fiber in it that makes full and prevents the release of ghrelin which is a hunger hormone. It also prevents the chances of overeating. Popcorn has low content of saturated fats as well as natural oils that is essential for maintaining healthy body.

Popcorn consists of adequate amount of manganese which is a great source of nutrition required to maintain and build healthy bones. It is a supplemental nutrient that supports the structure of bones in people with weak bones such as menopausal women. It also prevents the risk of arthritis, osteoporosis and osteoarthritis.

The serving size of 28 grams of popcorn according to USDA offers 0.9 mg of iron. Though it has low content of iron, an adult men requires 8 mg of iron a day and an adult women requires 18 mg a day as women loses blood during menstruation. The surveys show that 10% of women have deficiency of iron. So incorporating popcorn in the diet provides adequate amount of iron in the body and prevents anemia.

Popcorns are loaded with antioxidants such as polyphenols. Antioxidants eliminate free radicals that are responsible for severe diseases such as cancer. With balanced diet, popcorn promotes the intake of antioxidants to maintain healthy body. The presence of free radicals is associated with various health issues such as wrinkles, hair loss and aging.