Trending
You are at:Home»Fruits»Health benefits of Prunes 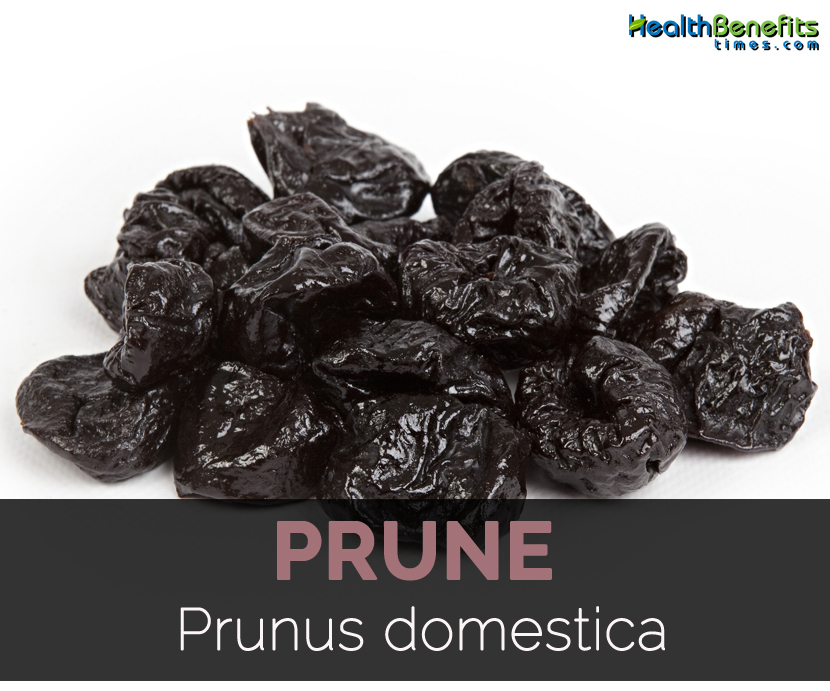 Prunus domestica is also called Common Plum, Gage, European Plum, Garden Plum, Prune, Plum and Prune Plum. Prune belongs to species Prunus domestica L. and family Rosaceae. More than hundred species of plum are sophisticated throughout the world in temperate regions since prehistoric times. The dried plums are known as prunes. China is regarded as the leading producer of plum in the world. The plum trees are small to medium sized. It bears leaves of ovate or elliptical shape with acute and obtuse tips, crenulate margins and short petioles. The small flowers are white with longer pedicles and born in umbel like 2 to 3 clusters on short spurs and solitary. Flowers turn into fleshy fruits in oval to round to conical shape with glaceous surface. Fruits vary in sizes and colors. The plant requires well drained moisture retentive soil. It thrives well in loamy soil and also does well on lime stone and heavy clay soils.

Plums have high content of potassium, Vitamin K and C and are a great source of dietary fiber and is often consumed dried, fresh or is prepared into jams, preserves, juices and jellies. It is also used in puddings and baked goods and used as a condiment alongside meat dishes. It is used to make alcoholic beverages in Central and Eastern Europe including the plum brandy called slivovitz. Plums have chlorogenic, neochlorogenic acid and phenols which are phytonutrients. Both dry and fresh plums act as a natural laxative due to the presence of isatin and sorbitol which provides relief from constipation. It adds bulk and enhances the free movement of fecal matter through colon so that it prevents the chances of developing colon cancer. Soluble fiber helps to lower the level of cholesterol by eliminating excess buildup of cholesterol and prevent its proliferation.

Prune was originated in area of Asia Minor and Caucusus. The cultivars were reported to occur about 500 BC in Central Europe and were already known to Teutonic and Celtic tribes. The fruit was distributed by Romans in Central Europe. High quality of cultivars was originated after Middle Ages from Southeast Europe and was distributed by seventeenth century throughout Europe. It is cultivated globally in temperate to warm temperate regions in Central, South and Southeast Europe, West Asia, North Africa, Australia, North America, South Africa, New Zealand and South America. Prunus domestica is a hexaploid species but its origin is still not known. It is believed to be originated from Prunus spinosa and Prunus cerasifera.

Plum tree measures from 29 to 50 feet (9 to 15 m) in height with reddish to brown twigs having no or few spines. Twigs while young are pubescent, covered with downy and short hair. Leaves are oval to oblong in shape and measures 10 cm (4 inches) long with wavy or serrated margins. Flowers are white, five petalled which occurs singly or in two or three clusters. The plant bloom flowers in early spring. Fruit measures upto 8 cm (3 inches) long and is round to oval in shape. It has a hard and stony flattened pit with smooth or slightly pitted shell. The color of the fruit considerably varies across varieties which ranges from green to yellow to red to purple to black and is often with white waxy bloom on surface.

Fruits are sweet, juicy and possess a tart taste. It is round having diameter of 8 cm. The color of the fruit varies according to its variety which could be red, blue, yellow or purple. The mature fruits have dusty to white coating that provides a glaucous appearance. This natural wax could be easily rubbed off. 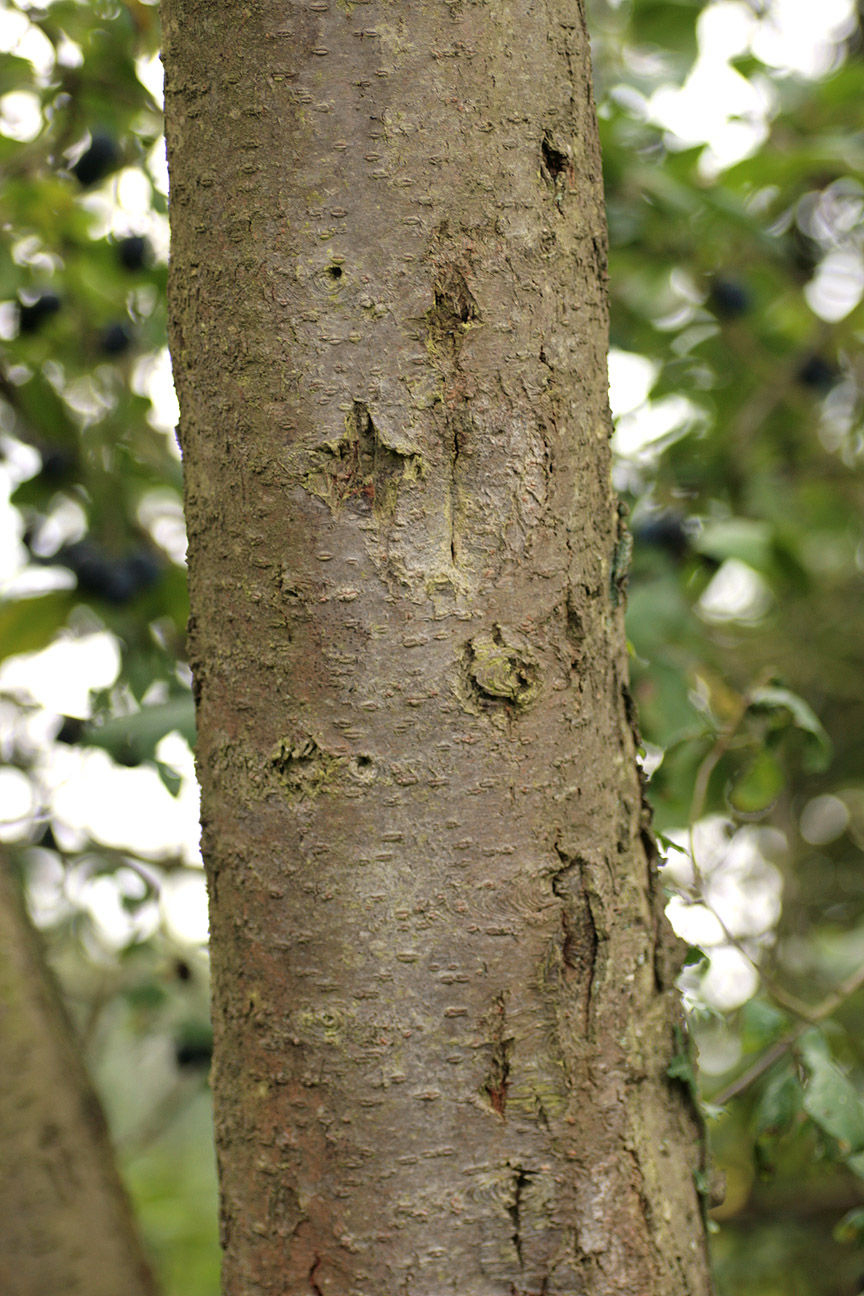 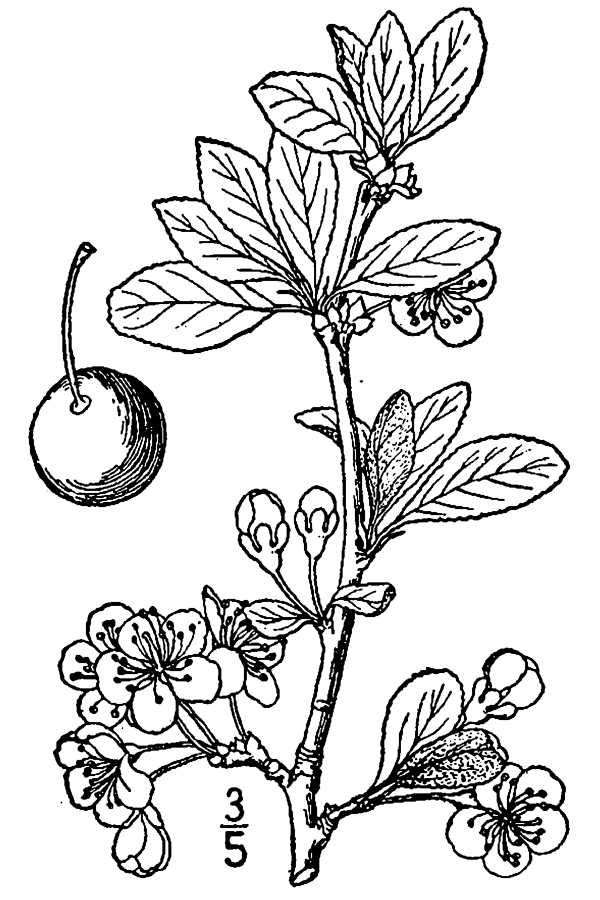 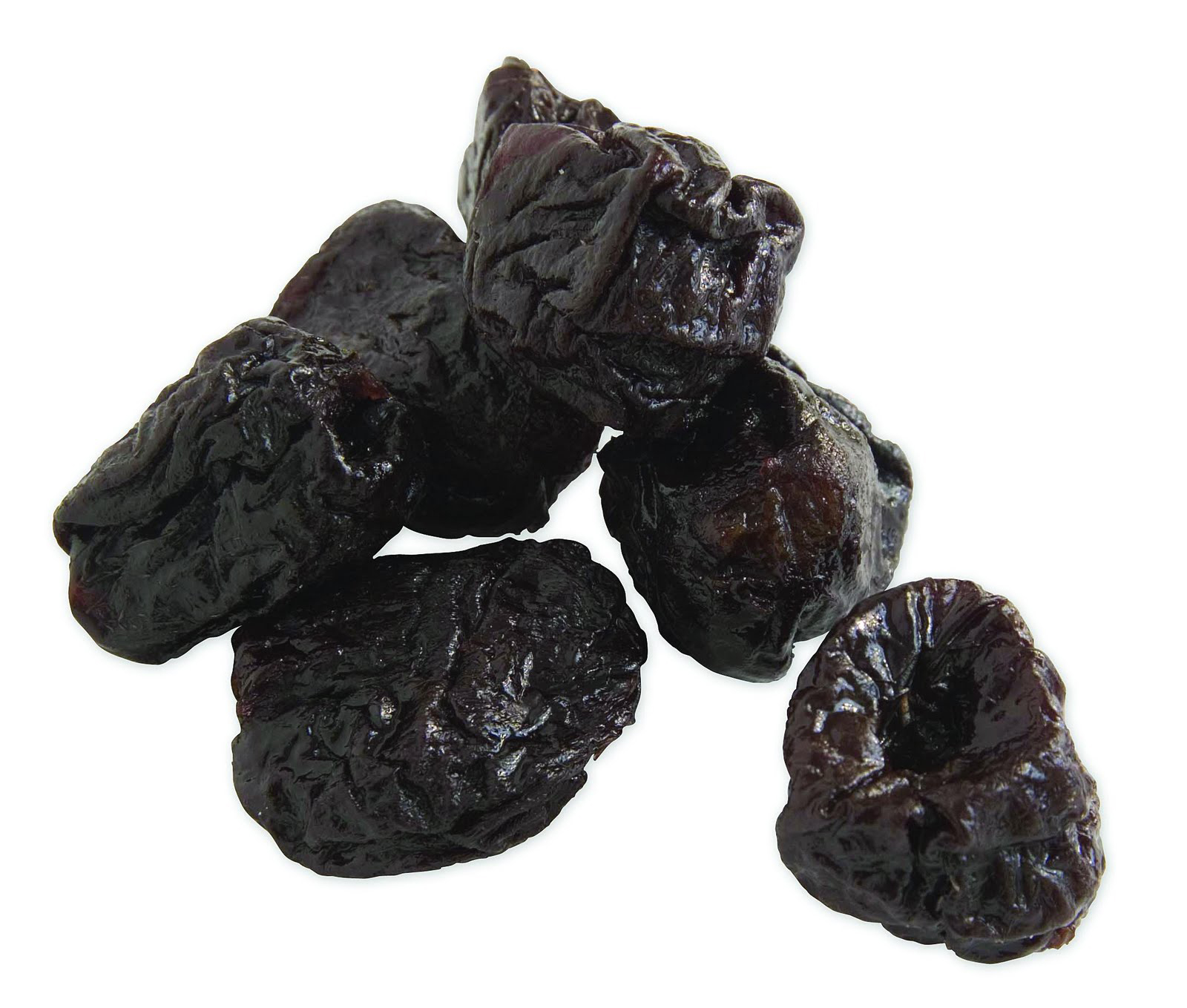 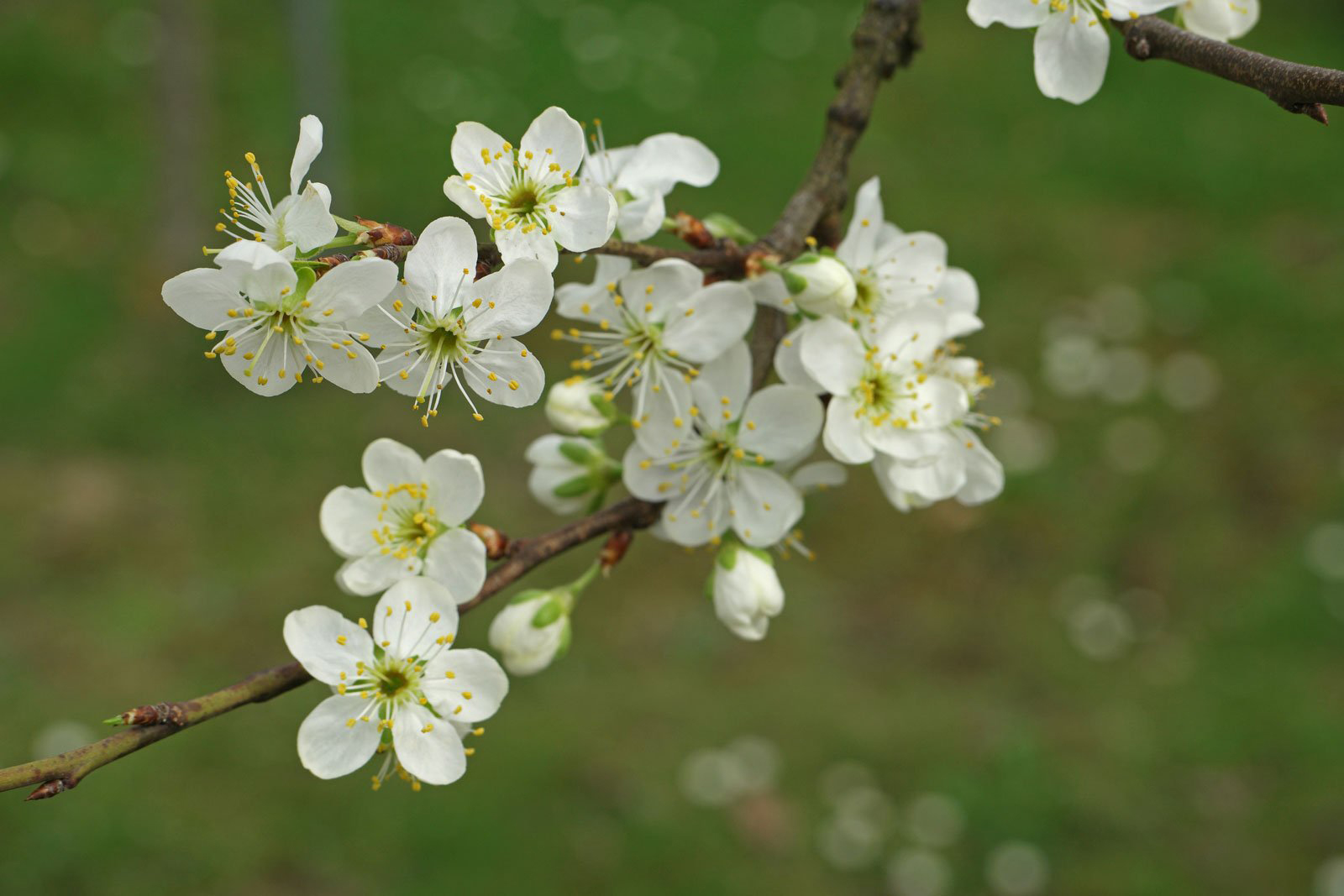 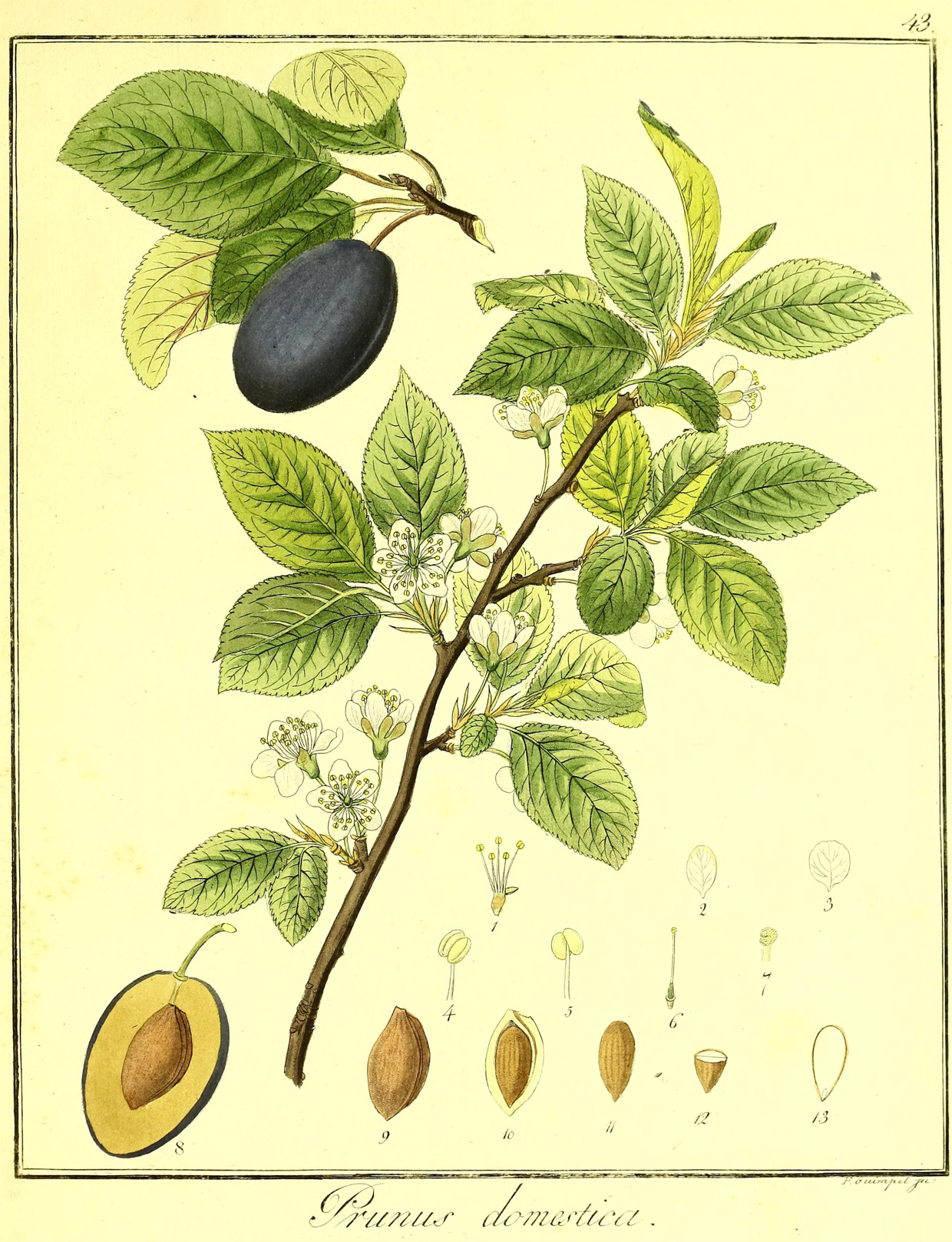 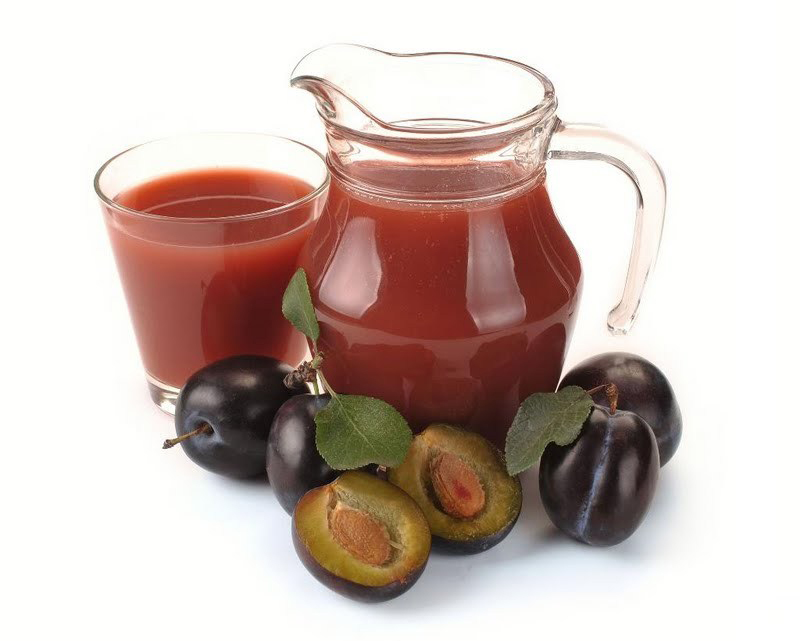 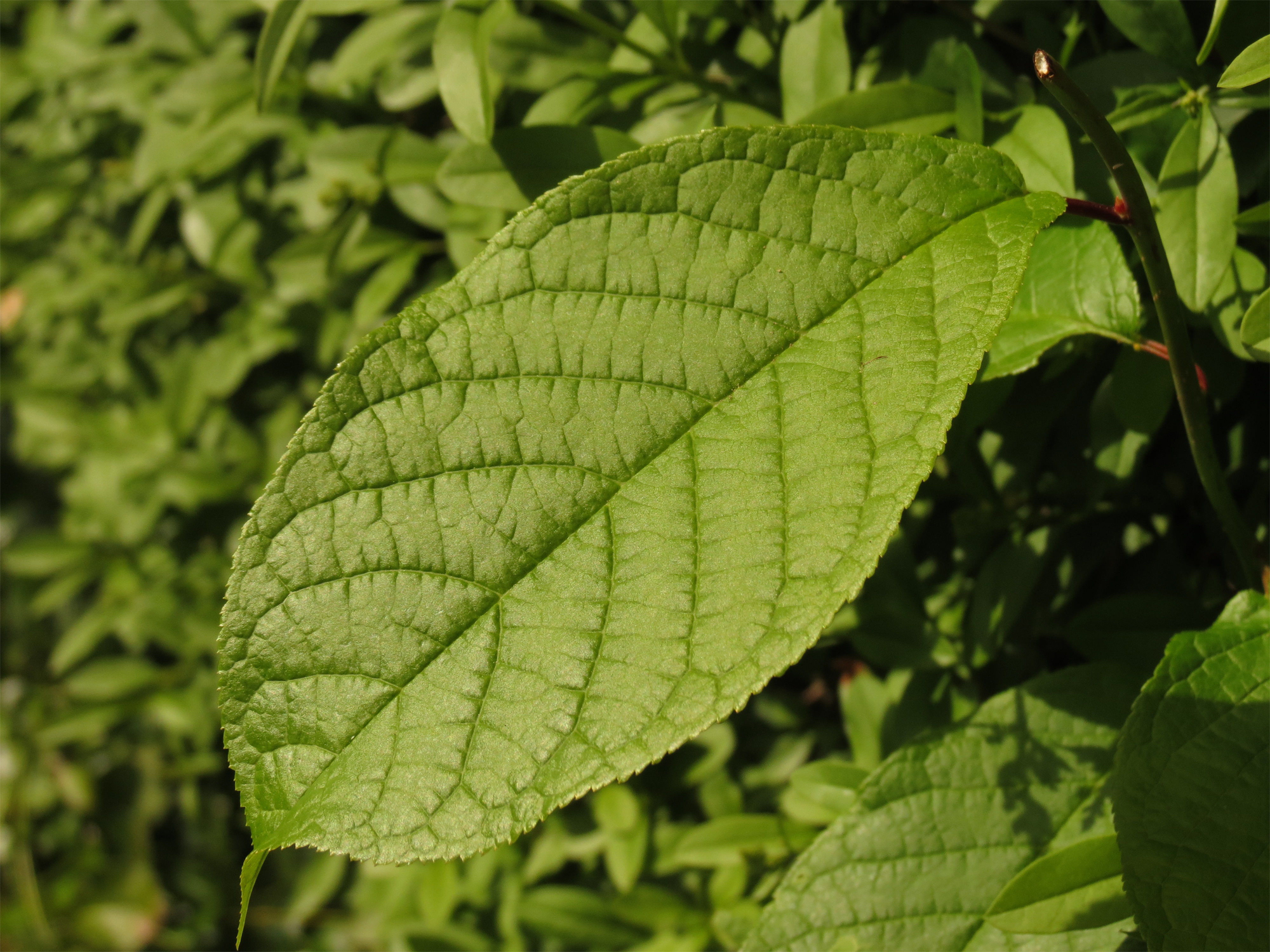 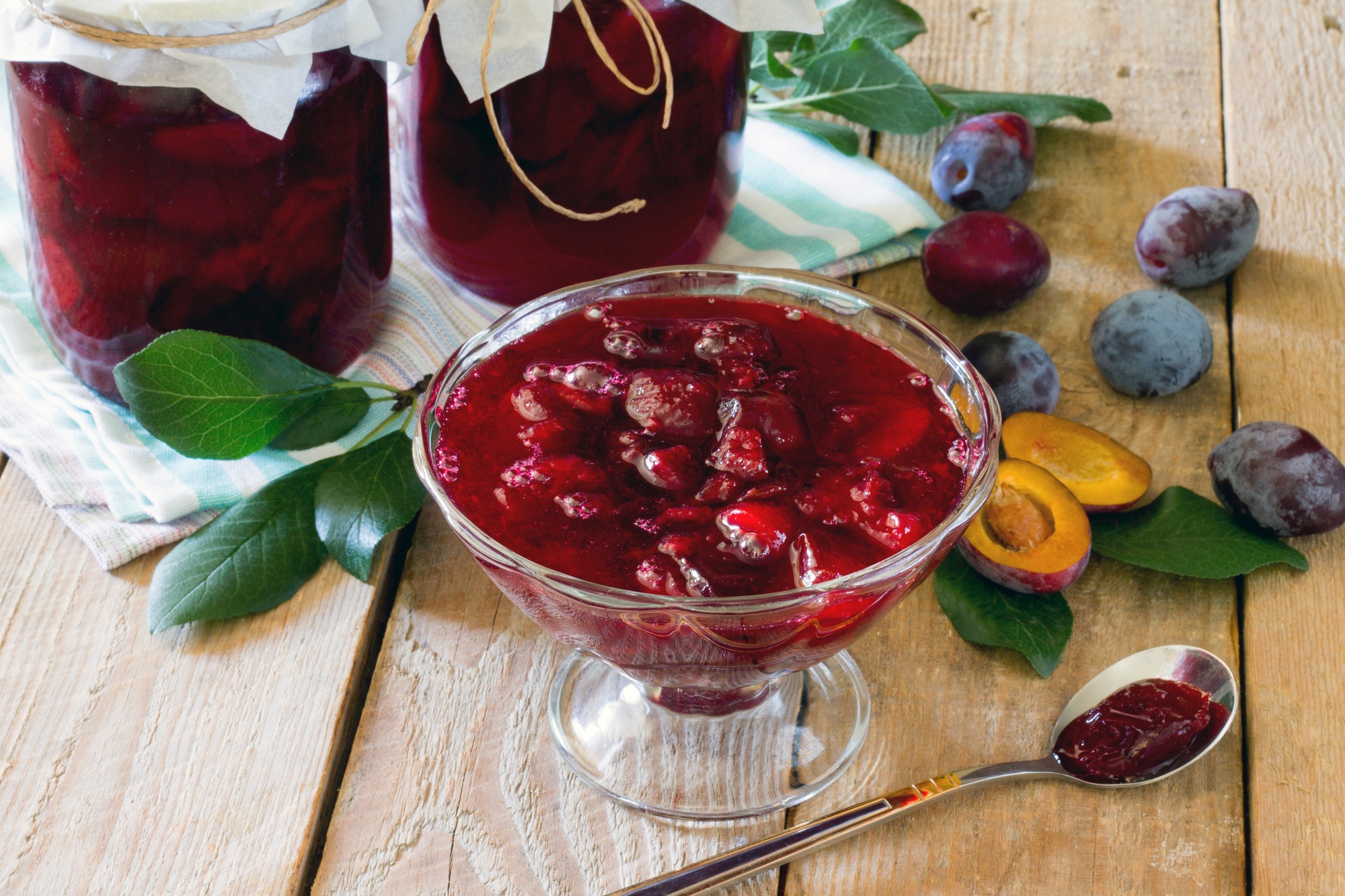 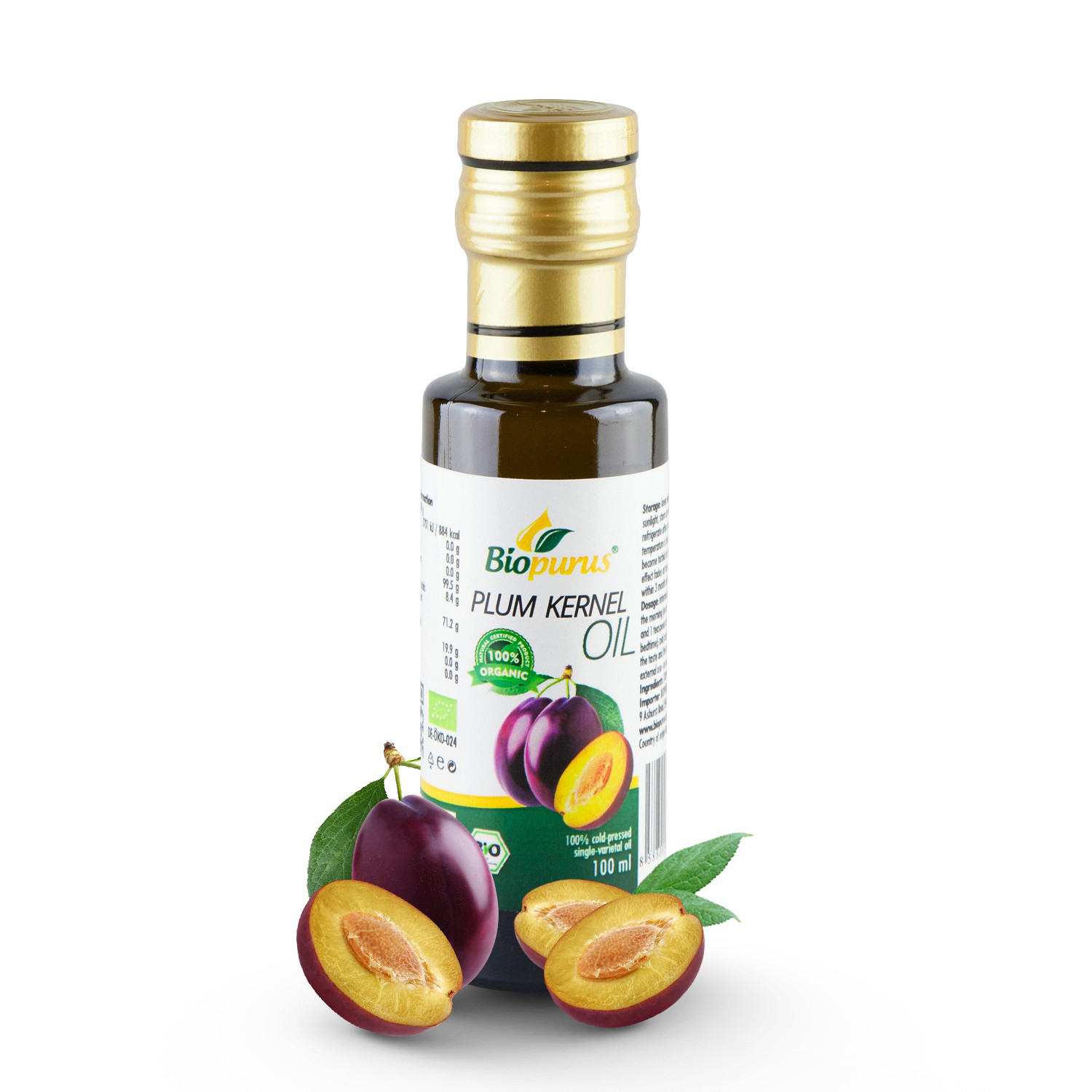 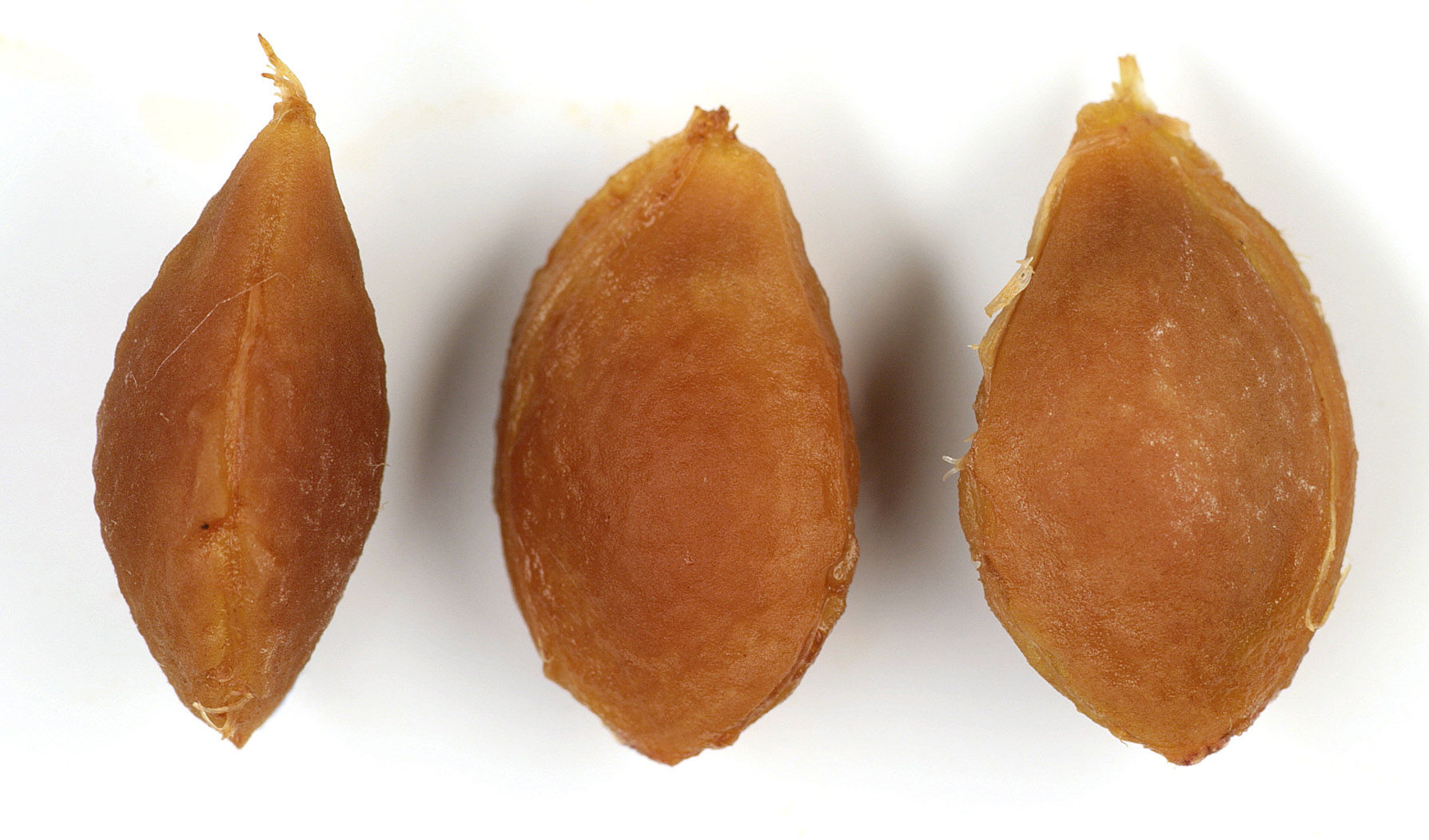 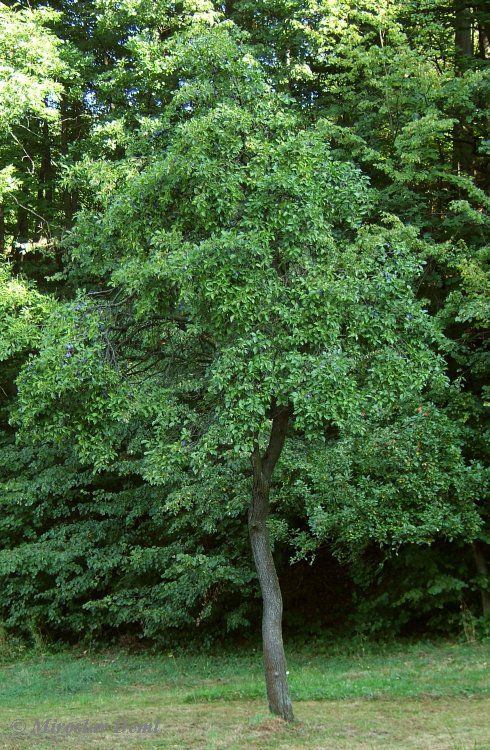 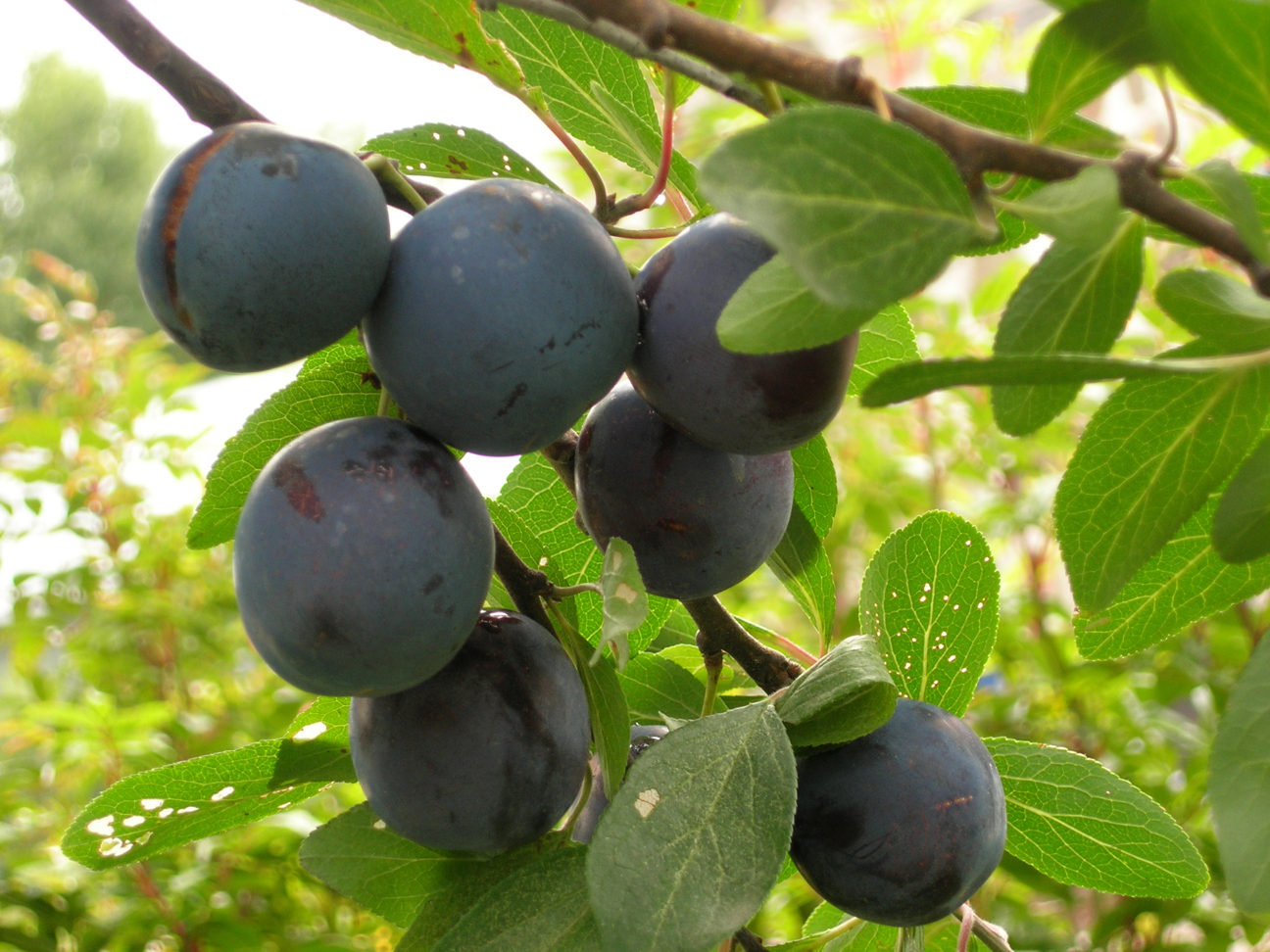 Prunes have ample amounts of flavonoid polyphenolic antioxidants such as cryptoxanthin, lutein which helps to scavenge free radicals which enters due to environmental toxins and poor eating habits. It leads to premature aging and cancer. It contains potassium which helps to formulate red blood cells, blood pressure and heart and Vitamin B6, niacin, Vitamin K, amino acid and pantothenic acid could also be found in it. Zeaxanthin and Vitamin A found in plums are good for eye health due to the presence of carotenoid that absorbs into retina and filters ultraviolet light. Vitamin C helps to protect cholesterol from damage made by free radicals and is helpful for the patients of atherosclerosis and diabetes.

HCV is a Hepatitis C virus infection which results chronic liver diseases. Standard therapies have severe side effects, high expense and resistance development. The present study was conducted to evaluate fruits which are known for its hepatoprotective activities in order to know the inhibitors. Then it was reported that Prunus domestica acted as a new HCV entry inhibitor. The confirmation and characterization was performed by NMR, LC-ESI-MS and IR spectral analyses. Rutin inhibit HCV-LP significantly by binding to hepatoma cells and inhibits cell culture derived HCV entry into hepatoma cells. Moreover, rutin was non-toxic to hepatoma cells. It inhibit early stage of HCV lifecycle by directly acting on viral particle. (1)

The intake of fruits such as prunes and plums is helpful for treatment of digestive disorder, measles, blood circulation disorder, diabetes, prevention of cancer and obesity. The study was conducted to know antioxidant and antiradical capacity of plum in both dried and fresh form. The findings shows that fresh ones are favorable in collecting oxygen free radicals such as peroxy radicals (ROO) and superoxide (O2-) in comparison to dried. (2)

Osteoporosis is a chronic age related disease which characterizes loss of bone in quality and mass and is also related with increase in chances of fragility fractures. Postmenopausal women have high chances of development of osteoporosis because of cessation in production of ovarian hormone which accelerates loss of bone. The lifestyle factors such as exercise and nutrition also lowers the chances of osteoporosis development and plays a vital role in bone health. The dried plum intervene the prevention and reversing structural loss and bone mass in rats as well as osteopenic postmenopausal women. The evidence was provided to show efficacy of dried plum to prevent and reverse bone loss related with ovarian hormone deficiency in humans and rodent models. The postmenopausal women who consumed 100 g of dried plum per day retain bone mineral density to a high extent in comparison to those who receive a comparative control. Moreover, possible mechanisms are highlighted by which bioactive compounds found in dried plum provide bone-protective effects. The study findings and other suggest that dried plum is an effective functional food therapy to prevent bone loss in postmenopausal women with long lasting bone protective effects. (3)

The evidence shows that nutritional interventions assist in treatment for obesity and most investigations utilized non-digestible carbohydrates only. Plum and peach has high content of polyphenols, compounds having demonstrated anti-obesity effects. An underlying process treats obesity successfully with the use of polyphenols which involves on an alteration of intestinal microbiota. (4)

Prunes has oxyphenisatin which acts as laxative. The high content of chlorogenic acids and sorbitol provides laxative effect of prunes. The study shows that an intake of yogurt which contains galactooligosaccharides, prune and linseed lowered constipation severity. The regular intake of prune juice provides mild laxative effect and significant lower in serum activities of serum alkaline phosphatase and alanine transaminase. Prune juice is effective for hepatic diseases. Prunes assist the body to digest food properly, have regular movement of bowel and provide relief from constipation. One prune provides 3% of recommended regular intake of fiber. Sorbitol found in prunes act as laxative as it pulls moisture into digestive tract and also facilitate bowel movements.

Prunes have high content of Vitamin A. One serving of 25 grams of prunes provides 15% of RDA of this vital nutrient. Prunes provide Vitamin A in form of five carotenoids such as beta carotene, alpha carotene, beta cryptoxanthin, zeaxanthin and lutein. Alpha carotene, beta cryptoxanthin and beta carotene are converted in form of Vitamin A which is used by cells in eyes which converts light into nerve impulses. Zeaxanthin and lutein are found in retina where it protect cells from toxic blue light wavelengths and also lowers the chances of developing cataracts and macular degeneration.

Prunes have high content of phytonutrients called phenols. It possess two phenols chlorogenic and neochlorogenic acid which have shown high effectiveness against free radicals especially superoxide anion radical. It damages fats in cell membranes, cholesterol molecules and brain cells so it neutralizes this free radical which supports protection of health. Moreover, prunes have high content of anthocyanins due to their rich purple hue. Anthocyanins and potent antioxidants contribute to liver function, heart health, arthritis relief and reduction in cholesterol with its anti-inflammatory activities.

Prunes assist one to manage weight by keeping full for longer time period. It has high content of fiber which take time to digest so that appetite stays satisfied for long period of time. Prunes have low glycemic index which raise the level of glucose (sugar) in the blood slowly. It is due to high content of sorbitol which is a sugar alcohol having slow absorption rate. It avoids spikes in level of blood sugar that are caused by foods having high glycemic index that keeps appetite at bay. The study shows that consumption of dried plums as a snack helps in suppressing hunger for longer in comparison to low fat cookie. Those who are on weight loss program should add prunes to the diet. 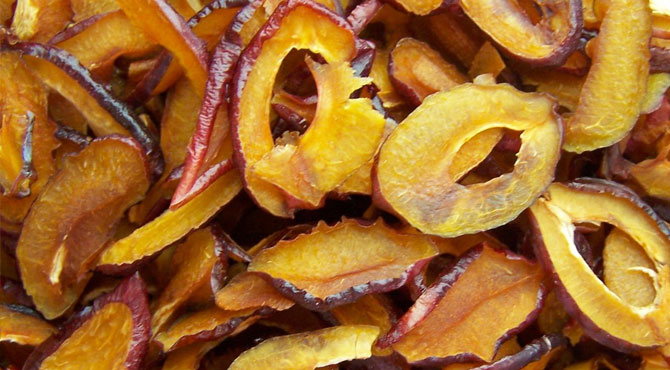 This is the high quality variety nowadays for consumer packs. The fresh fruit is medium-sized, egg-shaped. Skin is deep red to  purplish; the flesh is good flavored, even, non-porous as well as golden yellow. The drying out percentage usually averages about 3:1, fresh to dry. The pit is little, even, flat, and also long-oval. Collect maturation are usually mid-season. 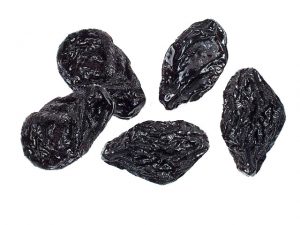 Fruit is quite big when trees are usually clipped and is also oblong along with almost equal halves, and it has darkish reddish skin. Trees are usually vertical growers and therefore are incredibly energetic while youthful. These are efficient at showing large crops. Trees bloom about a couple of days after do French trees and therefore are gathered about 10 days later on. The drying proportion approaches 4:1. The majority of lucrative when utilized in specialized packs as well as fresh market deliveries. 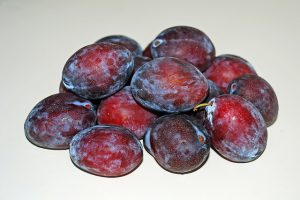 Most suitable for the fresh new marketplace. It really is big in dimensions, usually two times the dimensions of French. It has an earlier date of maturation, ripening within mid-July within an average year. The fruit is darkish purple to just about blue colored. The usage of this particular cultivar for drying out is limited-large pit size, drying time which is higher than 20 hours and also tendency to bleed as well as piece.