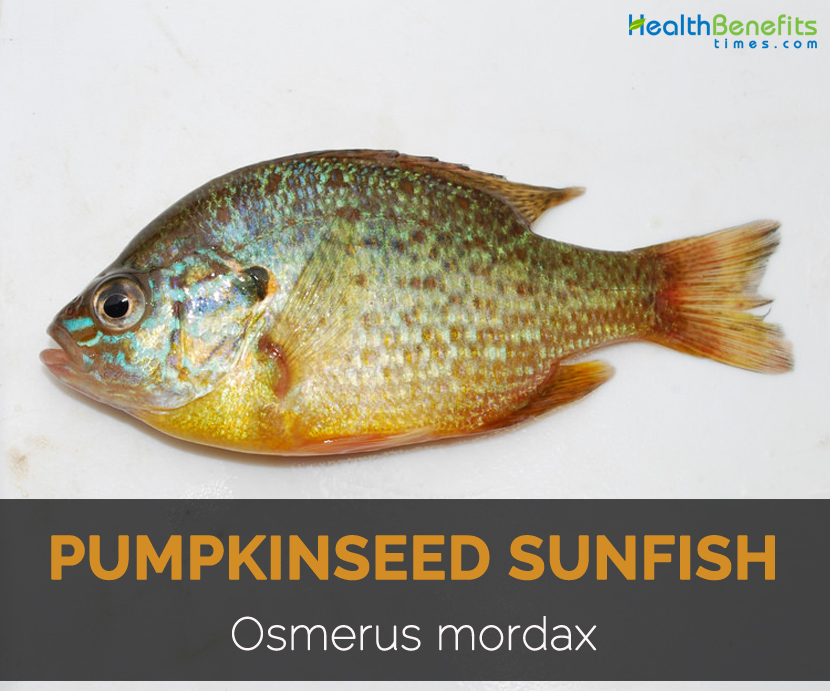 Typically, pumpkinseeds are 6-8 inches in length but could grow upto 10 inches. It weighs less than one pound. It is green, orange and blue in color having speckles over sides and back with orange breast and belly. Sides are coated with vertical bars which are faint green or blue typically more prevalent in female pumpkinseeds. Pectoral fins are clear or amber with black dorsal spines.

In late spring or early summer, when the water temperature reaches 55-63°F, male with start to build nests in shallow water on grand or gravel lake bottoms. Male uses its caudal fins to sweep out shallow and oval shaped nesting holes which stretch about twice of its length. With its mouth, fish discard debris and large rocks.

Nests are organized in colonies that consist of 3 to 15 nests each. Males are aggressive and vigorous and defend its nests by spreading opercula. Due to this behavior, they maintain larger territories. Females appear after the completion of nests, coming from deeper waters. Then male releases milt and female releases eggs. Females might spawn in more than one nest and the same nest could be used by more than one female. In one nest, more than one female will spawn with male concurrently. The eggs produced by female depend on their age and size. They could produce 1500 to 1700 eggs.

The eggs stick to sand, gravel or other debris in the nest once released and they hatch in three days. After spawning females leave nest but males remain and guard their offspring. Male guard for first 11 days returning them to nest in his mouth if they stray from nesting site. Young fish stays in shallow breeding area and grow about 2 inches in first year. Usually, sexual maturity is achieved by the age two. In captivity, pumpkinseeds have the life span of 12 years but in nature, it do not exceed 6 to 8 years old.

They live in calm, warm lakes, ponds and pools of creeks or small rivers having plenty of vegetation. It prefers clear water with shelter to hide. During the day, they are active and rest during night near the bottom in protected and covered areas such as submerged logs. It feed at all levels of water from surface to bottom in daylight and the heaviest feeding is in the afternoon. Usually, they travel together in schools which may include other sunfish and bluegills.

Pumpkinseeds feed on small food both at the bottom and surface of water. Its diet includes mosquito larvae, insects, crustaceans, small molluscs, minnow fry, worms and other smaller pumpkinseeds. It also feed on small crawfish and sometimes on small pieces of vegetation. They have terminal mouth allowing opening at anterior end of snout. Those living in waters having larger gastropods have larger mouths and related muscles to crack shells of larger gastropods.