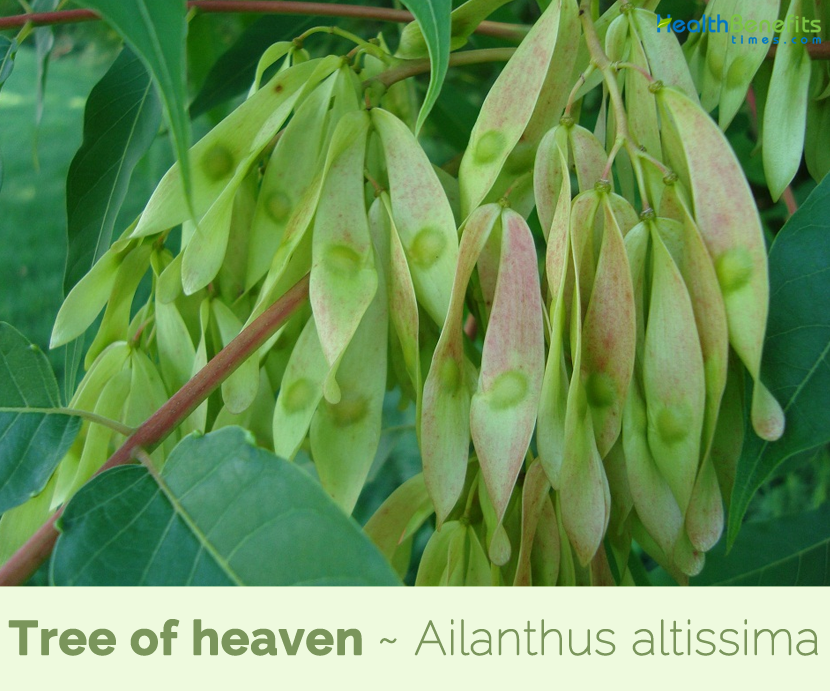 Tree-of-heaven, commonly referred to as Ailanthus altissima, is a rapidly growing deciduous tree native to a region extending from northern and central China, Taiwan and northern Korea to Australia. The plant belongs to Ailanthus Desf. (ailanthus) genus and Simaroubaceae (Quassia family). Unlike other members of the genus Ailanthus, it is found in temperate climates rather than the tropics. Some of the popular common names of the plants are China-sumac, Chinese tree-of-heaven, Copal tree, Stink tree, Tree-of-heaven, Varnish tree, Chinese sumac, Ailanthus, Skink tree, Varnish tree, Ailanto-da-China, China-sumac, Stinking shumac, stinking sumac and Swingle. Genus name is the Latinized version of the native Moluccan name ailanto meaning sky tree for a species of this genus. Specific epithet is a superlative form of the Latin word meaning high, hence the common name of tree of heaven. All parts of the plant have a distinguishing strong odor that is often compared to peanuts, cashews, or rotting cashews.

Tree of heaven is a medium-sized, fast growing, deciduous, exotic invasive tree that may reach 60 to 70 feet (18-21 m) in height, 80 feet (24 m) in crown width, and 20 feet (6 m) in trunk diameter at maturity. The tree is found growing in woodland edges and openings, thickets, riverbanks, vacant lots, landfills and dumps, gravelly back alleys, areas along roads and railways, fence rows, and urban waste areas. It tolerates a wide range of soil nutrient levels and other soil conditions. Best growth occurs on nutrient-rich, loamy soils, but tree-of-heaven establishes in nutrient-poor soils. The plant has taproot and several large lateral roots. Barks are normally smooth and light green when young, eventually turning to light brown to gray somewhat rougher with light tan fissures as the tree ages resembling the skin of a cantaloupe.

The twigs of tree-of-heaven are alternate on the tree, stout, greenish to brown in color, and lack a terminal bud. They have large V- or heart-shaped leaf scars. Twigs easily break to expose the large, spongy, brown center, or pith. Branches are light to dark gray in color, smooth, lustrous, and contain raised lenticels that become fissures with age. The ends of the branches become pendulous.

Leaves are large, odd- or even-pinnately compound, and arranged alternately on the stem. They range in size from 30 to 90 cm (0.98 to 2.95 ft.) in length and contain 10–41 leaflets organized in pairs, with the largest leaves found on vigorous young sprouts. The rachis is light to reddish-green with a swollen base.

Leaflets are ovate-lanceolate with entire margins, somewhat asymmetric and occasionally not directly opposite to each other. Each leaflet is 5 to 18 cm (2.0 to 7.1 in) long and 2.5 to 5 cm (0.98 to 1.97 in) wide. They have a long tapering end while the bases have two to four teeth, each containing one or more glands at the tip. The upper sides of leaflets are dark green in color with light green veins, while the undersides are a more whitish green. Petioles are 5 to 12 mm (0.20 to 0.47 in) long. The lobed bases and glands differentiate it from similar sumac species.

Flowers are small and appear in large panicles up to 50 cm (20 in) in length at the end of new shoots. Individual flowers are yellowish green to reddish in color, each with five petals and sepals. The sepals are cup-shaped, lobed and united while the petals are valvate (i.e. they meet at the edges without overlapping), white and hairy towards the inside. They appear from mid-April in the south of its range to July in the north.  It is dioecious, with male and female flowers being borne on different individuals. Male trees produce three to four times as many flowers as the females, making the male flowers more noticeable. Additionally, the male plants emit a foul-smelling odor while flowering to attract pollinating insects. Female flowers contain ten (or rarely five through abortion) sterile stamens (stamenoides) with heart-shaped anthers. The pistil is made up of five free carpels (i.e. they are not fused), each containing a single ovule. Their styles are united and slender with star-shaped stigmas. The male flowers are similar in appearance, but they lack a pistil and the stamens do function, each being topped with a globular anther and a glandular green disc.

Male flowers wither away; the female flowers are replaced by single-seeded samaras that mature during the late summer or fall. Individual samaras are about 2.5 cm long (1 in) and 1 cm (0.39 in) broad and are initially light green, but later become yellowish or reddish green, and finally become tan to brown. Each samara has two elongated membranous wings and a central seed; the wings are often slightly twisted. Individual seeds are about 5 mm in diameter, ovoid, and slightly flattened. The samaras are distributed by the wind or water.

The plant is said to have first introduced into the United States in the Philadelphia area in 1784. Immigrants later introduced tree-of-heaven to the West Coast in the 1850s. It was initially valued as an urban street tree and was extensively planted in the Baltimore and Washington, D.C., area. From these areas, tree-of-heaven has spread and become a common invasive plant in urban, agricultural, and forested areas. Today this plant is found in many parts of the world due to its wonderful health promoting benefits.

There are three varieties of Ailanthus altissima

Traditional uses and benefits of Tree of heaven