Trending
You are at:Home»Herbs and Spices»Punarnava facts and health benefits 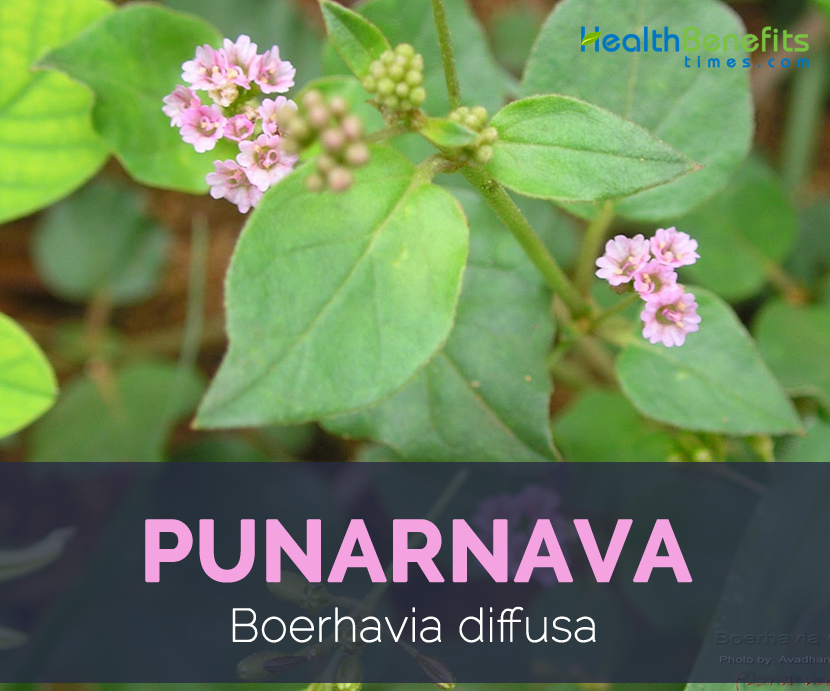 Boerhavia Diffusa commonly known as punarnava is actually flowering plants that belong to the family Nyctaginaceae which rejuvenates or renew the body. The other common names of the plant are spreading Hogweed, Red Hogweed, horse purslane, pigweed, Red spiderling and Tarvine. This herbal medicine is used to relieve pain and the leaves are used as a green vegetable in numerous parts of India.

The word punarnava literally means, one which renews the body, that is, which brings back the youth. Punarnava enjoys an important place among medicinal herbs in India since ancient times. Various parts of Boerhavia diffusa are used for the treatment of numerous disorders. The root, leaves, aerial parts or the whole plant of Boerhavia diffusa have been used for the treatment of various disorders in the Ayurvedic herbal medicine (daily used by millions of people in India, Nepal, Sri Lanka and indirectly through it being the major influence on Unani, Chinese and Tibetan medicines).

Punarnava has two varieties as mentioned in Ayurvedic text i.e. white and red variety of Punarnava. It has been mentioned in the Ayurvedic text that the white Punarnava variety is what we commonly call Punarnava i.e. Boerhavia diffusa and the red Punarnava variety is Trianthema portulacastrum which is normally used to adulterate Punarnava roots. Thus white Punarnava is basically used for the medicinal purpose. The white variety of Punarnava works as all the three dosha (vata, pitta and kapha) shiamak i.e. it suppresses all the three serious doshas whereas the red Punarnava variety worsens the vata dosha and suppresses the pitta dosha. As a whole both the varieties of punarnava are laghu (light) and ruksha (dry) in properties.

Boerhavia diffusa, belonging to the family of the Nyctaginaceae, is mainly a diffused perennial herbaceous creeping weed of India. Boerhavia diffusa is about 0.75-1 m in length and occasionally it grows up to 4metrs in rainy seasons having spreading branches. The stem is prostrate, woody or succulent, cylindrical, often purplish, hairy, and thickened at its nodes. The leaves are simple, thick, fleshy, and hairy, arranged in unequal pairs. The shape of the leaves varies considerably ovate – oblong, round, or sub-cordate at the base and smooth above. The margins of the leaves are smooth, wavy or undulate. The upper surface of the leaves is green, smooth and glabrous, whereas it is pinkish white and hairy beneath.

The flowers are minute, sub-capitate, present 4-10 together in small bracteolate umbrellas, mainly red or rose, but the white varieties are also known. The achene fruit is one seeded nuts which are round or circular, about 1cm long, containing seeds like cow’s beans and are dull green or brownish in color. The tap root is tuberous, cylindrical to narrowly fusiform, conical or tapering, light yellow, brown or brownish grey. It is thick, fleshy and very bitter in taste. 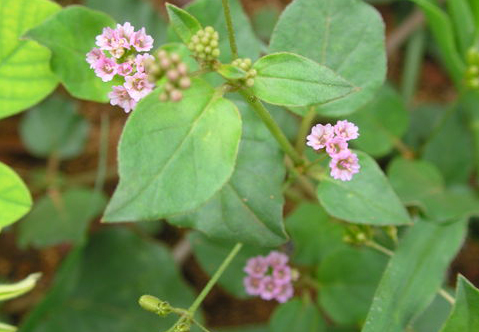 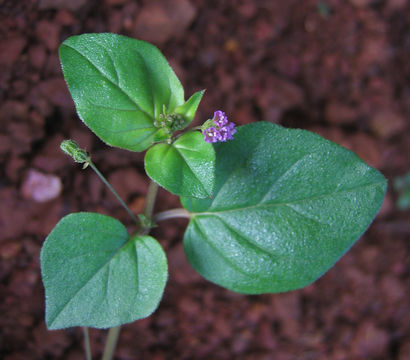 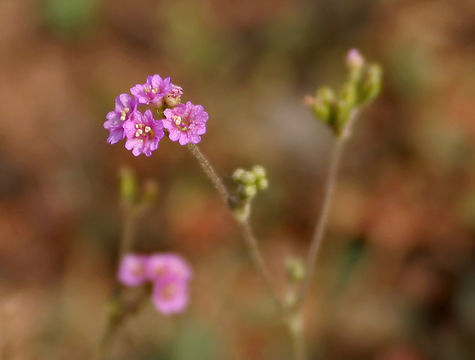 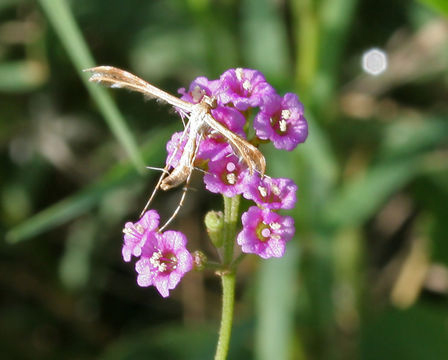 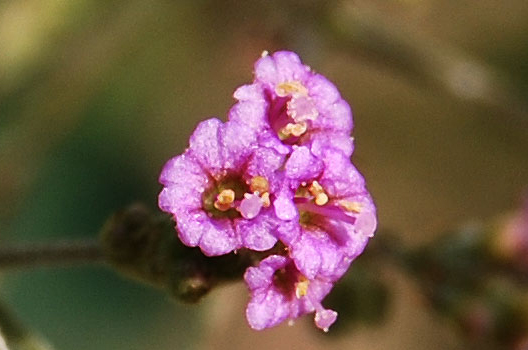 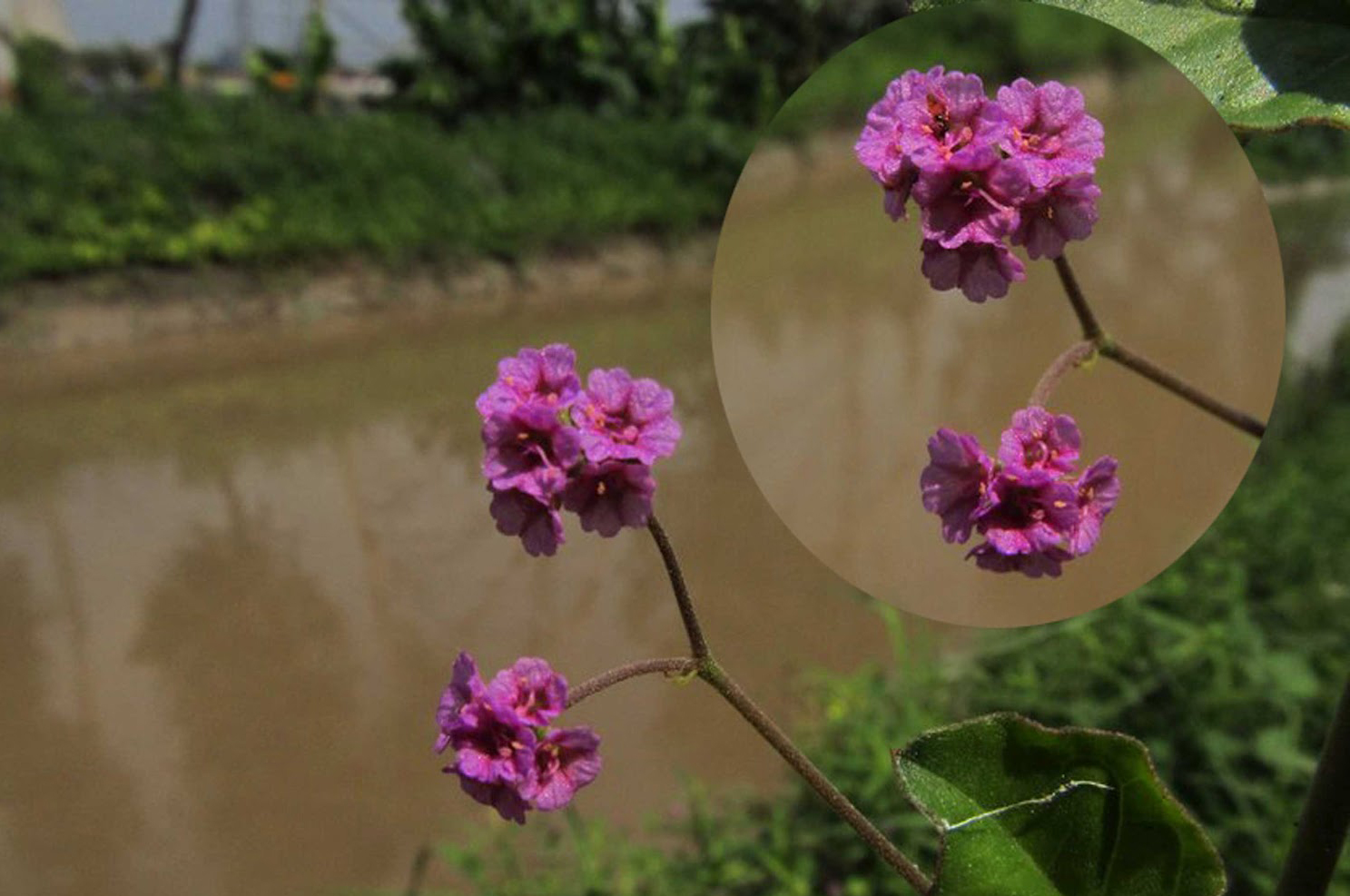 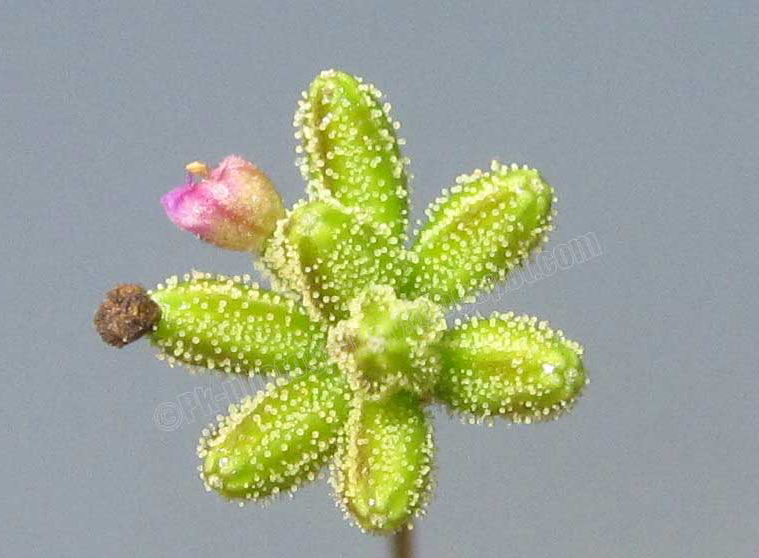 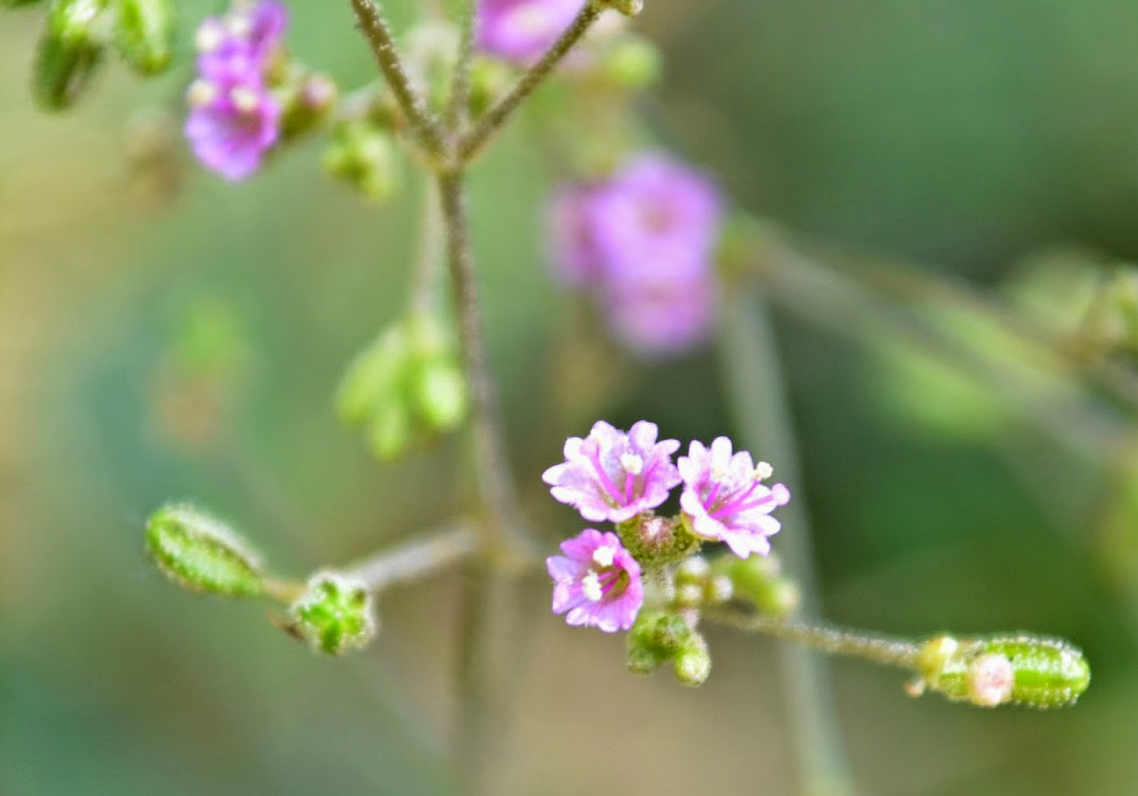 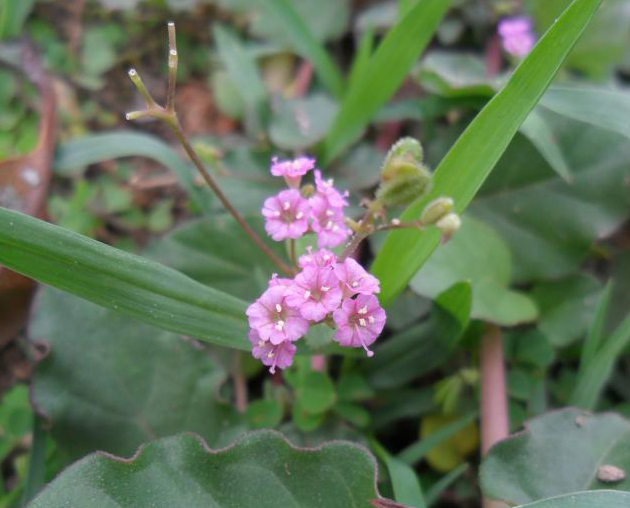 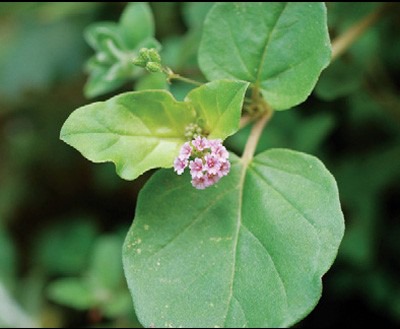 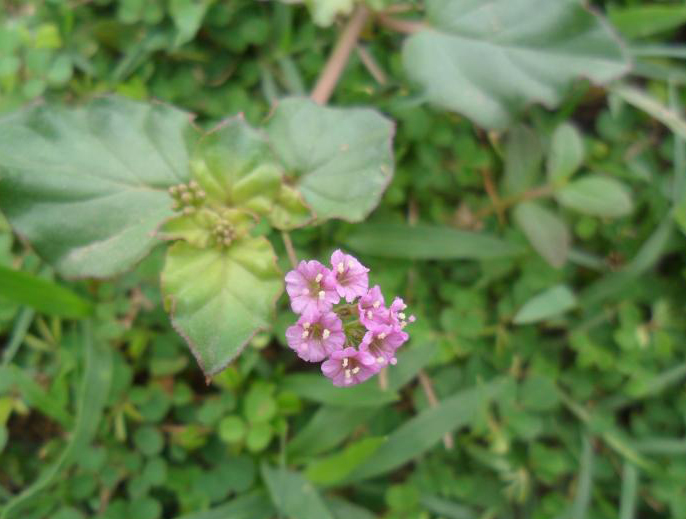 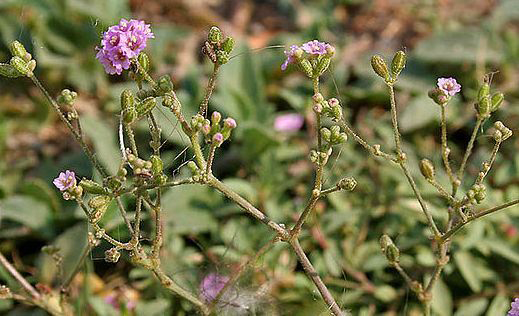 Punarnava is a medicinal herb famous for its health promoting benefits. Punarnava is used in treating obesity, improving appetite, jaundice, and general fever. The word punarnava literally means ‘renewer’ or one which renews the body as Punarnava tends to renew and revitalize the body systems. Almost all anti-obesity medications contain Punarnava as one of its ingredients. Hence is beneficial in treating obesity. It also helps to maintain effective kidney function. Listed below are some of the popular health benefits of Punarnava

Punarnava is widely used to revitalize liver and cleanse it. If the body is attacked with any of the infection the first stressful part will be the liver. As a result, the person will become fatigued and sluggish. So at this initial stage it is logical to use Punarnava, which helps to restore health, stamina and vitality. This herb can fight the disorders of liver like hepatitis, jaundice, iron deficiency anaemia, anorexia and sluggish liver. The healthy liver even aids in increasing the basic hemoglobin of an individual.

Punarnava works as a diuretic. In addition, Punarnava also has antimicrobial, anti-inflammatory and antispasmodic properties, which are beneficial in treating urinary tract disorders like chronic and recurrent urinary tract infections (UTIs), including UTIs in pregnancy.

Punarnava is used as an ingredient in almost all the herbal slimming formulations. The herb stimulates the removal of excess fluids and waste products from the body by promoting urination without electrolytes or potassium loss. Thus, it helps in weight loss. It also works as a mild laxative.

Punarnava leaf extract is quite beneficial for diabetes. It considerably decreases glucose levels in blood and in turn increases plasma insulin levels.

Punarnava is beneficial for alleviating eyes diseases like night blindness and conjunctivitis. Instill the fresh juice of its roots in the eyes for the treatment.

Punarnava has become a staple for healing and creating health particularly for kidney patients. The herb helps to get rid of excess body fluids and at the same time prevents the formation of urinary stones. Just one month use of this Ayurvedic herb can encourage Kidney functioning better.

Punarnava herb provides relief from joint pains and inflammation related with arthritis. Just use the paste made of fresh herb by grinding and applying directly on the affected area.

Seeds of Punarnava help to rejuvenate the male reproductive system. The herb is known to increase libido and quantity & quality of semen. It even cures erectile dysfunction.

Punarnava strengths the stomach and promotes its action. It treats a number of stomach problems, particularly intestinal colic. Take 5 grams of the root powder three times a day. It helps to kill or expel intestinal worms.

Punarnava helps anemic patients suffering with appetite loss and weakness. It encourages formation of the red blood cells. However, iron supplement should be taken with Punarnava.

Dropsy is a disease in which excess of watery fluid gets gathered in the tissues and cavities of the body. Punarnava herb enhances the discharge of urine and thus treats the condition. You can consume fresh boiled herb or liquid extract of the plant (4 to 6 gms) to cure the disease.

Punarnava is considered one of the best herbs for cancer treatment. Punarnavine, an alkaloid is believed to be an anti-cancer agent. The study has shown that punarnavine enhance the immune response and prevent the metastatic progression of B16F-10 melanoma cells in mice. The extract from the whole plant is very much beneficial for cancer cure. The herb has also been shown to be hepato-protective, choleretic, cardiokine, anti-cancer and anti-oxidant.

Punarnava is an excellent remedy for high uric acid level. It increases the uric acid secretion through the kidneys.

Ascites is a condition marked by an excessive collection of a watery fluid abdominal cavity. Mostly the herb cures the ascites caused by liver disorder.

Dried leaves of Punarnava can be used in dhoomapana in treatment of bronchial asthma. The leaf decoction is said to be an excellent expectorant when decocted with punarnava (Boerhavia diffusa) and then combined with ginger juice and black pepper

Boerhavia diffusa or Punarnava belongs to the family Nyctaginaceae. This is also known as spiderlings as this plant grows low and spreads like spider web. Boerhavia diffusa is identified by name Punarnava in India. Ayurvedic texts hugely praise the medicinal properties of this plant. It is a perennial herb that consists of creeping stem that is usually purple in color. The plant is about 0.75-1m in length. Occasionally it grows up to 4mtrs in rainy seasons and dries in summer. Leaves are usually whitish and smooth underneath and rough green on upper surface which are 2.5-4cm long, fleshy with soft hairs, whitish ventrally. Flowers are small, pink colored. Fruits are one seeded nuts which are round or circular, about 1cm long, containing seeds like cow’s beans. Flowering and fruiting of plant take place during winter.