Trending
You are at:Home»Herbs and Spices»Facts and Benefits of Red Trillium 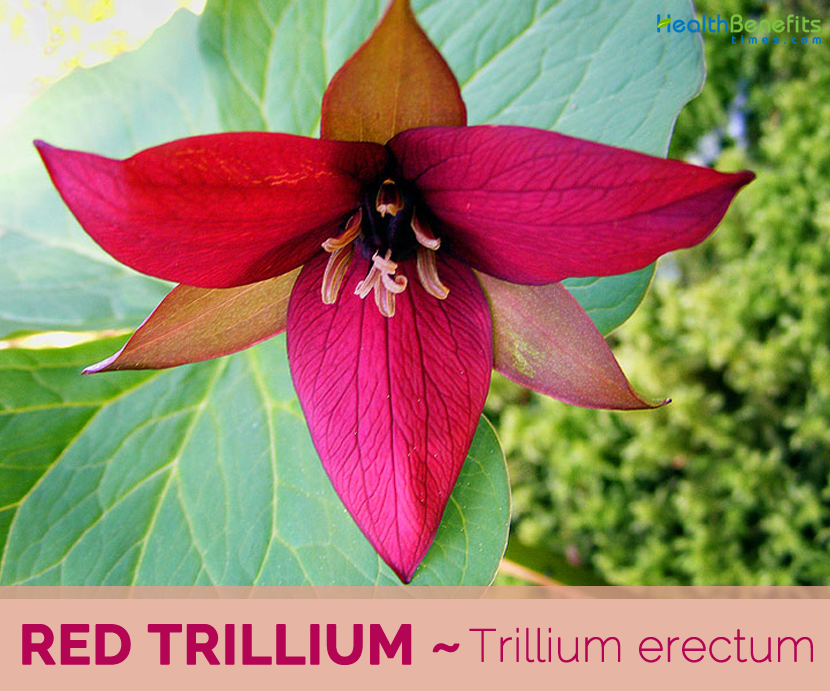 Red trillium is a perennial flowering plant that is known by many different names across the globe. Some of the most common names given to it are American Ground Lily, Bethroot, Birthroot, Coughroot, Ground Lily, Indian Balm, Indian Shamrock, Jew’s-harp Plant, Milk Ipecac, Nodding Wakerobin, Pariswort, Red Trillium, Snakebite, Three-leaved Nightshade, Trillium, Wake Robin, purple trillium,  Beth root, Indian Balm and Stinking Benjamin. This last name arises due to the pungent rotten meat like smell of its flowers. This plant has large, thick stalks and three pointed leaves, above which red or white flowers grow. Scientifically it is given the name Trillium erectum. The plant is native to east and north-east of North America. The genus name refers to the fact nearly all parts of the plant comes in threes. It has 3 broad leaves on each stalk, 3 small green sepals and 3 large white sepals (petal-like structures) surrounding a group of yellow stamens.  It also has three-sectioned seedpods. When the flowers mature, they will produce red, brown or purple berries.

Red Trillium is a spring ephemeral, an herbaceous perennial plant that grows about 40 cm (16 in) in height with a spread of 30 cm (12 in). The plant is found growing in rich deciduous woodlands that are more or less mesic and wooded slopes. It prefers soil that is more or less moist and contains loam with decaying organic matter. Root are  oblique, globular, oblong or obconical, truncate below, terminated by a small bud surrounded by a sheath of scarious leaf bases annulated by leaf scars and fissured by stem scars. It is from 0.6 to 5 cm. in length, and from 0.6 to 3.5 cm. in width, more or less compressed laterally, rootlet scars in several concentric rows on the underside in the upper portions. Externally it is yellowish to reddish brown and internally of a pale yellow. Fracture is somewhat uneven with a more or less spongy appearance. Stem is light green to purplish green, terete, and glabrous.

Leaves are 3-8 inch long and similarly across; they are oval-rhombic in shape, smooth along their margins, and sessile (or nearly so). The upper leaf surface is medium green and glabrous, while the lower surface is more pale; both surfaces are glabrous. Primary veins of the leaves are parallel, while secondary veins form an interlacing network.

Flowers are 2 inch across, consisting of 3 maroon petals (reddish purple), 3 light green to greenish maroon sepals, 6 stamens, and a dark maroon ovary with 3 small recurved stigmata. When the flower is open, both petals and sepals are widely spreading; they are about the same length and similar shape, although the sepals are narrower. The petals and sepals are lanceolate to ovate in shape and glabrous. The relatively small stamens have anthers and filaments that are about the same length; the anthers have light gray to yellowish pollen. The flowers have the smell of rotting meat, as they are pollinated by flies. Flowering normally takes place from May to June. Afterwards, the ovary matures into a dark maroon fruit that is broadly ovoid, 6-angled, and about ½ inch long. This fruit contains several seeds.

The leaves can be used in salads, and have a peculiar taste likened to a sunflower, or they can be cooked as a pot vegetable, like spinach or kale. The root, whether fresh or dry, can be boiled or powdered and the resulting mixture can be consumed to get a more concentrated form of the plant’s nutrients. The leaves or the root can be mixed into various topical concoctions as well, which can be applied directly to the skin for additional benefits.

Traditionally, the indigenous tribes of the America as well as the early European settlers in North America used trillium to enable the labor of child birth. Trillium was also used to cure other problems related to gynecology, including tender nipples, menstrual disorders as well as the uneasiness caused by menopause. Even to this day, trillium remains to be used for easing several of the symptoms mentioned above, in addition to hemorrhages related to uterine fibroids. Listed below are few of the health benefits of using red trillium include

The plant consists of certain antiseptic qualities, which is useful when used as a topical solution. In that case, red trillium can be made into a paste, either through crushed leaves, or boiled/dried root, and then spread directly on an affected area. For a wound or abrasion, it can help to prevent any infection from developing. It similarly clears out our gastrointestinal system of dangerous parasites and bacteria that can make us ill. (1)

Red trillium has long been used to deal with respiratory distress, specifically because it acts as an expectorant, helping to remove phlegm or mucus from the respiratory tracts. This can help to speed up the healing process of colds and also protect the immune system against the pathogens that often thrive in mucus. (2)

When topically applied to an affected area, a paste or salve made with red trillion can quickly remove inflammation and improve the appearance of bruises. By stimulating blood flow to the area, it can induce more rapid healing, while removing the pain and severity of the wounds due to its various antioxidant and analgesic properties. (3)

Although the research is new in this particular area, early results show that red trillion can have an effect on tumor growth and metastasis, making this an invaluable alternative remedy for people suffering from various forms of cancer. Be sure to discuss the possible use of red trillion with a doctor before combining this approach with any other formal treatments. (4)

One of the earliest uses of red trillion was to cure stomach upset and diarrhea. To this day, this remains a popular use of the herb, and while dysentery isn’t nearly as common as it was when this herb first came to popularity, those suffering from IBS and other gastrointestinal issues can still derive a lot of relief from this surprisingly powerful herb. (5)

This powerful herb is known to be an emenagogue, meaning that it stimulates menstruation. Red trillium can be a wonderful remedy for women who suffer from particularly painful menstrual cramps or symptoms to soothe the body and prevent spasms and cramps. (6)

While this plant can be slightly dangerous for pregnant women early in their term, as it can induce menstruation, it is very effective for stimulating childbirth, which is why it has the secondary common name of “birthroot”. If you are struggling through an exceptionally painful labor, ret trillion can help to stimulate childbirth and ease the process by providing natural pain relief. (7)