Trending
You are at:Home»Fruits»6 Health benefits of Redcurrant 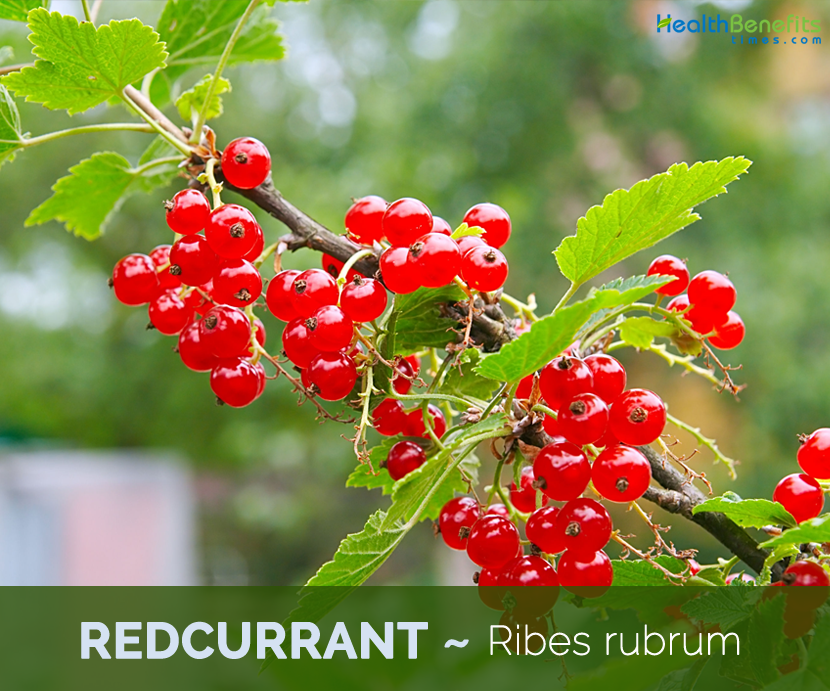 Redcurrant scientifically known as Ribes rubrum is a small, deciduous low-growing shrub in the Grossulariaceae (currant and gooseberry genus, although in many classifications formerly included in Saxifragaceae), native to northern Europe and northern Asia, which is widely cultivated for its fruit both commercially and in home gardens. Other red-fruited wild and cultivated currant species that may be known as red currants include R. sativum, sometimes called the cherry currant, as well as R. petraeum, R. longeracemosum, and R. multiflorum. Apart from red currants it is also known as Cultivated Currant, Common Currant, Garden Currant, Reps, Ribs, Risp, White Currant.

Redcurrant is a deciduous shrub, fast growing under ideal conditions. The plant is a multiple-stemmed clump, 1 to 1.5 m (3 to 4.5 ft.) in height, but is suitable for training as a standard. Annual growth is in a single flush in spring. The roots are superficial, fine and easily damaged by frequent cultivation. The plants is extremely cold hardy, have long chilling requirements, intolerant of summer heat and have short maturity and thrives in organically rich, medium moisture, well-drained loamy soil.

The leaves are alternate, single, lobed and maple-like with 3 to 5 coarsely toothed lobes; the terminal lobe is longer than the side lobes. Black currant leaves are pale green, while those of the redcurrant are deep blue-green. Both are easily burned by strong sunlight. Leaf size and number is decreased under water stress.

Currant flowers borne toward the bases of one-year old stems and on spurs on older stems. They appear in early spring with new growth. Each flower bud opens to number of flowers (up to 20), joined together on a delicate, drooping 5 – 6 inch stem, and called a strig. The strig length is reduced or flowering is suppressed by lack of winter chill. Individual flowers (green in the case of redcurrants and blush pink for black currants) are not showy, but joined together on the strig they give the bush a lacy texture. Depending upon the cultivar, fruits ripen from 70 to 100 days after blossoming.

Fully set strigs will be a pendulous chain of small berries. The fruit is easier to pick if their strigs are long and have “handles” (clear lengths at the bases) for holding onto while harvesting. Black currants commonly ripen from the top down, encouraging birds to strip berries as they color. Modern redcurrant varieties have been selected for their ability to ripen all the berries on a strig at once. Berries are smooth skinned, globose, pleasantly acid, glabrous, about 8–12 mm diameter, with 3–10 berries on each raceme. The berries contain 3 – 10 minute, bony seeds.

Redcurrants are a great source of antioxidants such as vitamin C and manganese. Antioxidants protect the body from the effects of oxidative stress, which may help strengthen the immune system and ward off diseases. Listed below are few of the health benefits of using redcurrants in your daily life

Redcurrants are packed with nutrients that are beneficial for skin. Redcurrants are rich in B vitamins and Vitamin C. Vitamin C is a powerful antioxidant that fights and even reverses free radical damage in skin cells. These vitamins also help with skin cell regeneration and promote healing from harmful UV ray damage. This makes redcurrants a great food to add to your skin care diet.(1)

Redcurrants are good source of iron, which is essential for the formation of red blood cells. Red blood cells constitute about 40 – 45% of the total composition of blood. Red blood cells are extremely important as they carry out the work of transporting blood and other nutrients to various cells and organs in the body. Lack of iron can have many consequences, which can be avoided by taking iron rich foods, including fruits like red currants.(2)

As mentioned before, Redcurrants are rich in vitamin C, which strengthens the immune system, nourishing it to prevent the body from succumbing to viral and bacterial attacks. It prevents not only common colds, but also gives the body the ability to fight against the formation of certain kinds of cancers. Vitamin C plays an antioxidant role in the respiratory tract, thus a source of relief for asthmatics. Vitamin C contained in redcurrants also contains anti-histamine properties, which prevent and reduce the effect of allergies.

These little red berries are fairly large dose of fiber content. Fiber is an essential part of a balanced diet that promotes regular bowel movements by soaking up water in the lower digestive tract and physically cleaning and pushing out waste. It helps to bulk up the colon and activates bowel movements. Fiber helps to prevent constipation, which is lush in today’s society because of junk food which is refined and virtually fiber free.

Potassium present in redcurrants is a heart-healthy mineral that plays an important role in cardiovascular health. It also helps prevent hypertension and lowers blood pressure. Potassium is also great for other body organs including the kidney and is known to reduce the risk of strokes as well.

Organic redcurrants are low in calories, with only 63 per cup. They are also low in fat and high in dietary fiber, making them an ideal weight loss food. Fiber makes you feel full faster, so you eat less.

Red currants are for culinary use: juice, jellies and purees. Cultivars are selected for the clarity of juice, size of berry and productivity.

Bush is vigorous, much branching, roots most resistant to Armillaria, tolerates some dryness. Tends to break dormancy early, with protracted bloom, some strigs ripening as others are still in bloom. Earlier fruits will mature while soil remains moist from winter rains. Berries are dark red, rather small.

Select red currants that are firm and vibrant in color. Soft and soggy currants are probably too ripe or spoiled.

Once bought keep refrigerated. They will keep fresh for up to a week.

Red currants can also be frozen to be used when not in season. If you fear your red currants will get spoiled before usage, simply pop them in the freezer. 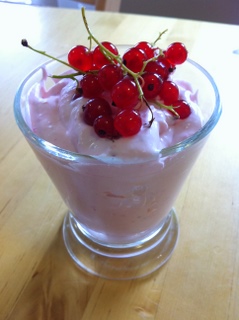 The redcurrant (Ribes rubrum) is a member of the genus Ribes in the gooseberry family Grossulariaceae. The plant is native to parts of Western Europe (Belgium, France, Norway, Sweden, Germany, the Netherlands, northern Italy, northern Spain, Portugal, and Poland). The tart flavor of the redcurrant fruit is somewhat greater than the blackcurrant; however, they have got same approximate sweetness. Redcurrants are usually grown for jams and cooked preparations, but are used for salads, garnishes, or drinks.